Not long ago, in this post, I featured Michael Carson, whose style evolved recently. Commenters mentioned that his earlier work reminded them of that of Malcolm Liepke.

That was true for me as well, and it's mentioned in the Wikipedia entry on Liepke (above), which also notes Liepke's friend Milt Kobayashi as a subject of his influence. And it turns out that Carson, like Liepke, has Minnesota ties; something in those 10,000 lakes affecting the artistic air there?

But there's more! While noticing Carson's new work in Palm Desert I chanced upon yet another painter doing the Liepke thing. The name is Leslie Sanbulte, but I couldn't find any background information on a quick Google search. That is, nothing regarding Minnesota.

In light of all this, I now proclaim a new school of painting: the Greasy Face School. In support, I humbly offer the examples below. 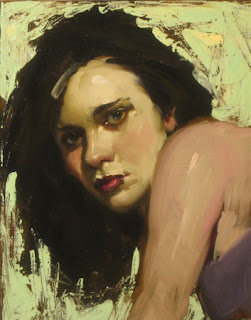 Malcolm Liepke - Over Her Shoulder 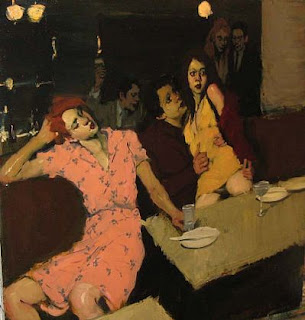 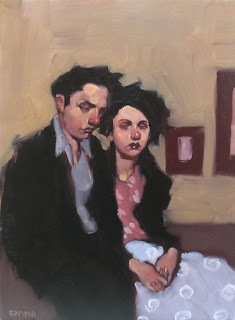 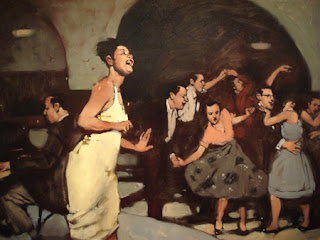 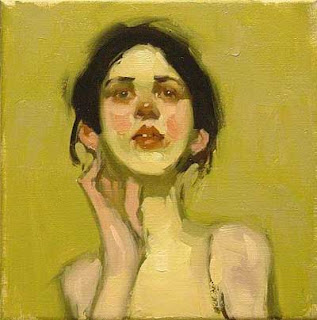 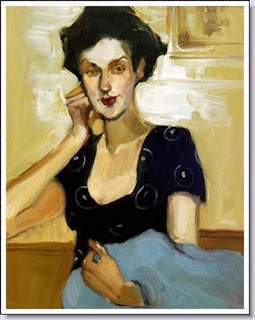 
In another recent post I compared a currently active painter with Joaquin Sorolla and wondered about similarities in style and subject-matter.

I halfheartedly offered the thought that perhaps it was subject-matter (the coast around Valencia) that contributed to the Sorolla effect. But the similarity in treatment of skin for the artists featured here cannot be explained away in the same manner.

It's a big world and the USA is still pretty much a free country, but I question the wisdom of artists painting in the same off-natural style. Since Liepke seems to be the originator, that's okay by me: I like a fair amount of his work. But the others ought to try something else for their own professional good, I think. And as I posted earlier, Carson seems to have realized this and is now doing work I find more interesting than his Greasy Face stuff.

Posted by Donald Pittenger at 2:15 AM

Actually, Liepke and Kobaytashi were roomates years ago, and (if memory serves) studied under the same influences.
They've had virtually parallel careers, it seems, rather than one or the other being the initiator.

Your other example isn't someone I'm familiar with. There's yet a fourth who paints rather like Skip Liepke or Milt Kobayashi, whose name escapes me. She teaches, I think at the Scottsdale Artists School.

Greasy face school made me laugh. I really do enjoy Liepke's work, but I can only look at so much before feeling a bit sickened with the indulgent succulence of it all. It really does have the feeling of fatty, delicious gourmet food about it. Like roasted Lamb chops with Mint Hollandaise Sauce and sauteed mushrooms with a side of butter soaked mashed potato pie.

I too am admirer of Skip ala Malcom Liepke.His intuitive designs abilities are to be admired and studied.That said the draughtsmanship is flaccid as with the pretenders;Kobayashi,Carson and Sanbulte.You can not hide a lack of drawing skills behind a fat brush.

You won't believe this, but I know of two other painters who are doing this. I cannot think if their names (one is an asian american woman I think and I believe her name might be Joyce something). I think she used to sell paintings on eBay... I too instantly realized the influence here, and started to research it. But for a lack of search terms to use, gave up. Now som much time has passed, I think the old files are on my old computer... Alas, mystery.

You are thinking of Kim Roberti.

Who cares if theres influence. Look at all the great painters of past and you find not only influence of style, but even copies of other great more prominent artists. Sounds like its a personal problem.