Frank Earle Schoonover (1877-1972) was a prominent early 20th century American illustrator.  He was one of the Brandywine School group trained by Howard Pyle.  In many respects his work was similar to that of the better-known Brandywine artist N.C. Wyeth, but Schoonover was not quite Wyeth's equal.

I wote about Schoonover here and here.  His Wikipedia entry is here.

Schoonover is best known for his outdoors scenes. The present post presents some of his illustrations that incorporate canoes -- light, rather fragile, somewhat unstable boats developed by American Indians, among others. 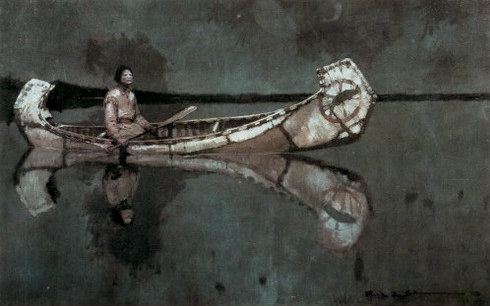 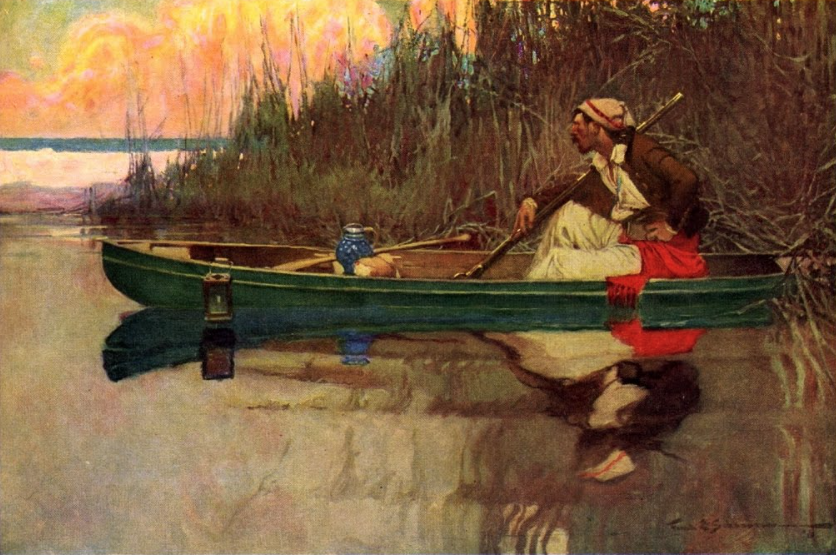 Jean Lafitte - 1912
The French pirate/privateer who worked the Caribbean in the early 1800s.  Not a quite a canoe, but nevertheless a fine illustration. 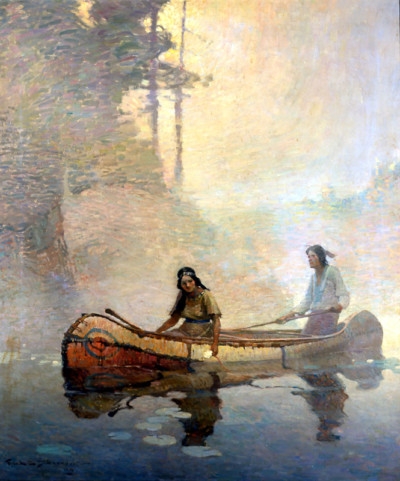 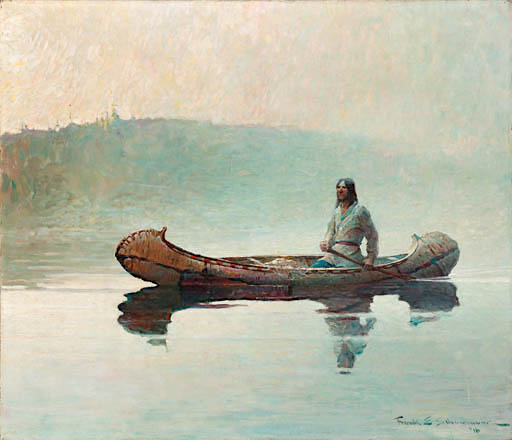 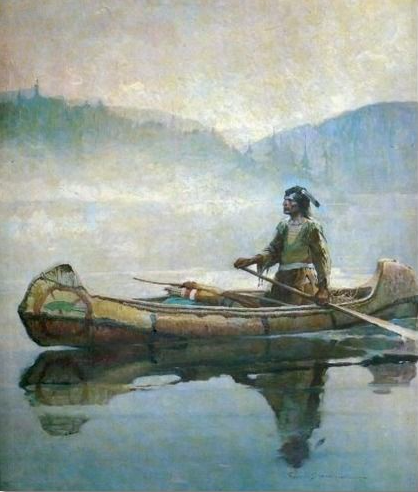 The Last of the Mohicans - 1922
Similar to the previous image.  Illustrators often take advantage of production shortcuts. 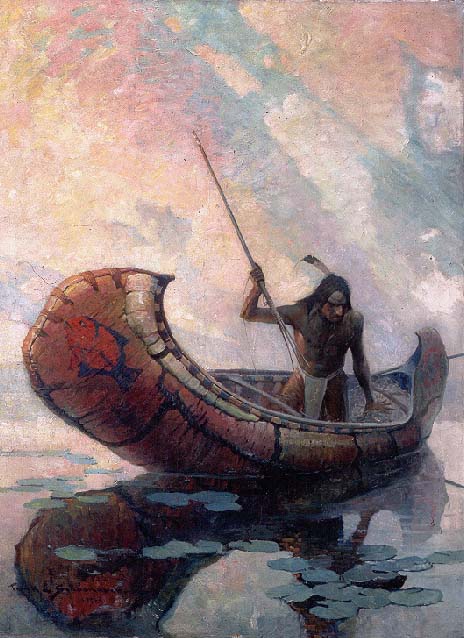 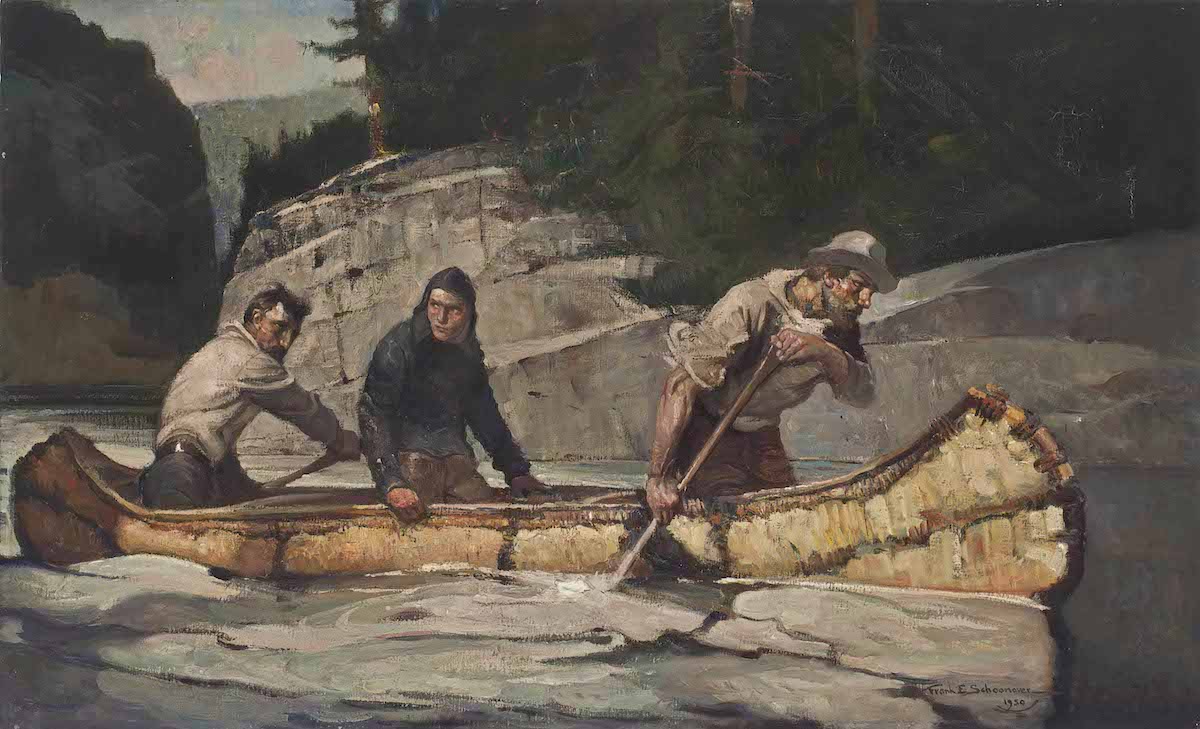 As the Canoe Swept By - 1950
Schoonover's style remained essentially in place over much of his career, as this late work indicates.
Posted by Donald Pittenger at 1:00 AM No comments:

Glen Orbik (1963-2015) is perhaps best known for his "noir" style book cover art.  Besides having a good sense of staging, he handled lighting very well.  Perhaps the most important factor in his success was his skill at depicting people.

Along that line, I posted here about figure drawings he made.  In today's post are some Orbik drawings featuring heads. 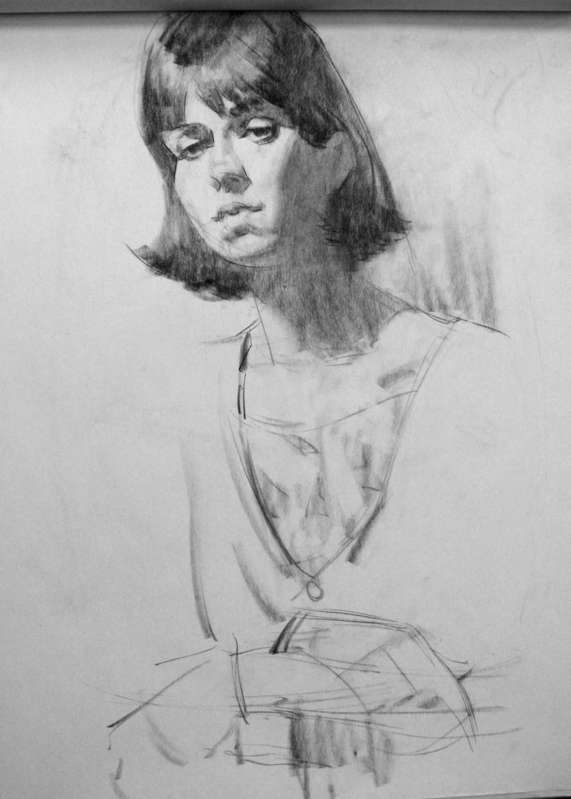 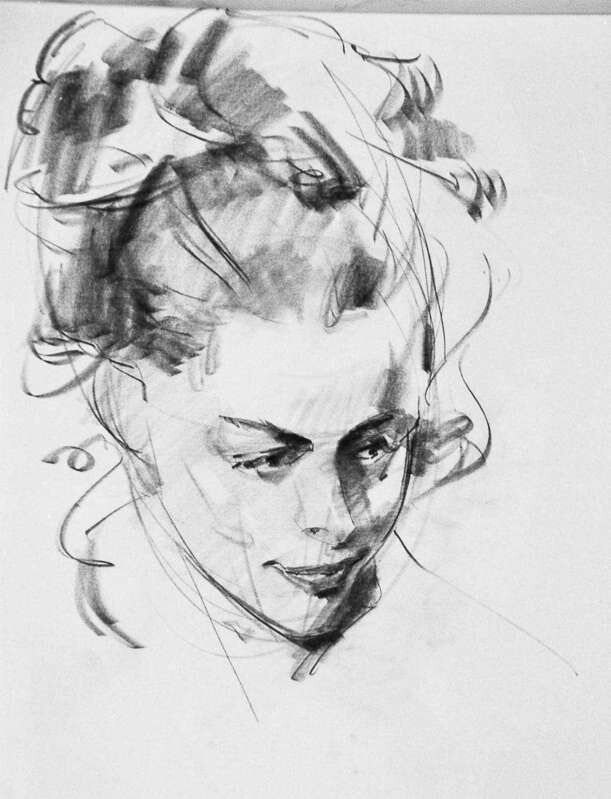 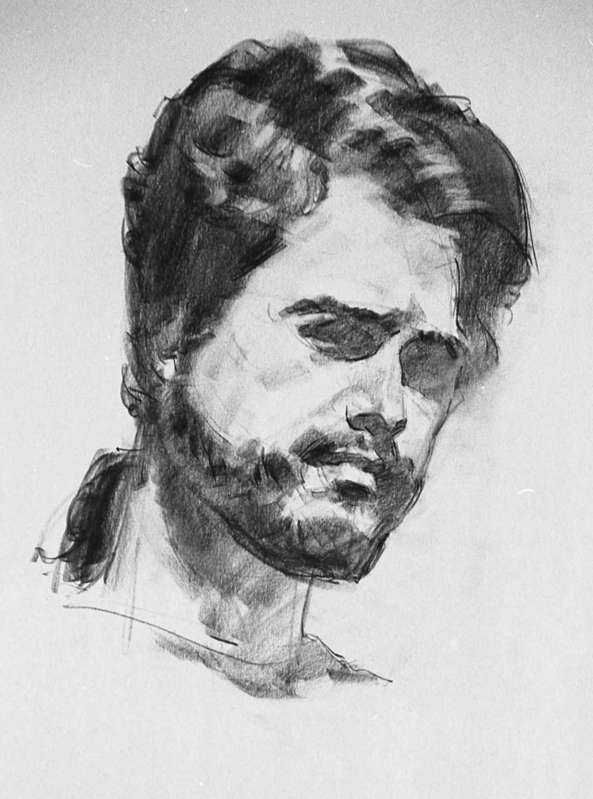 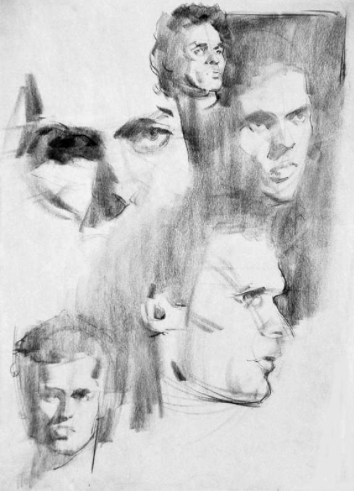 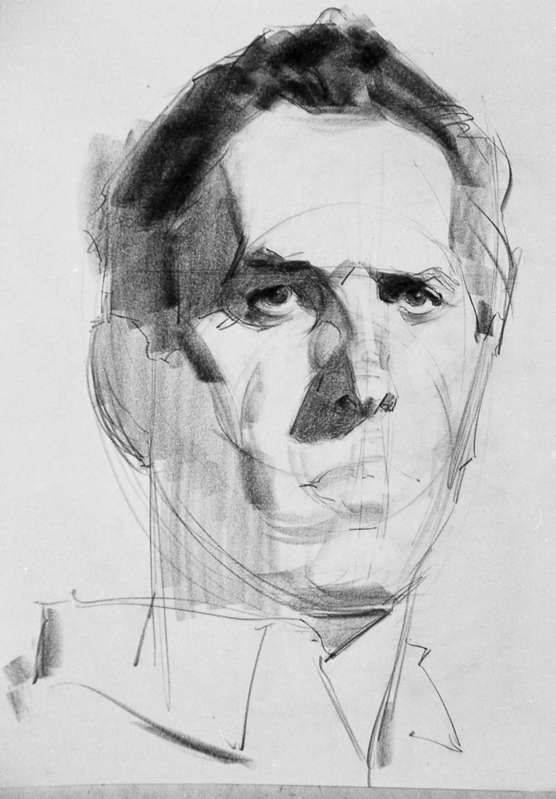 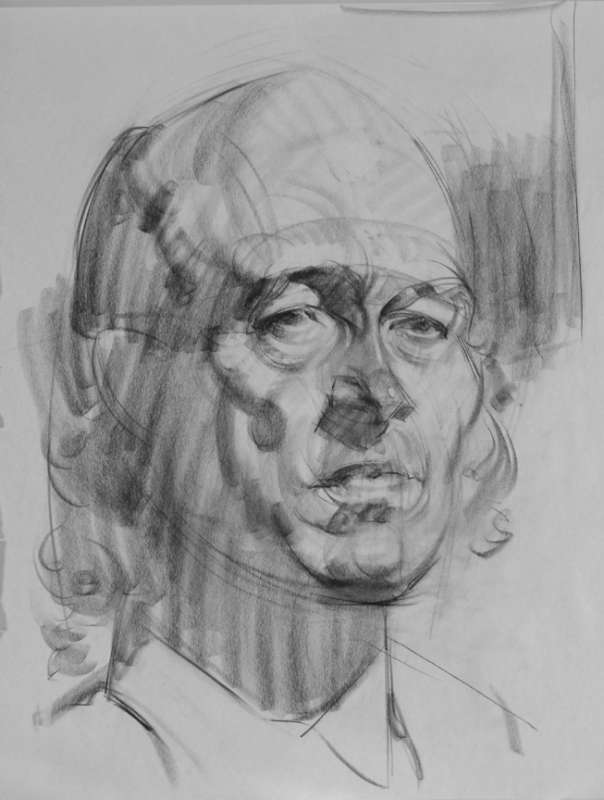 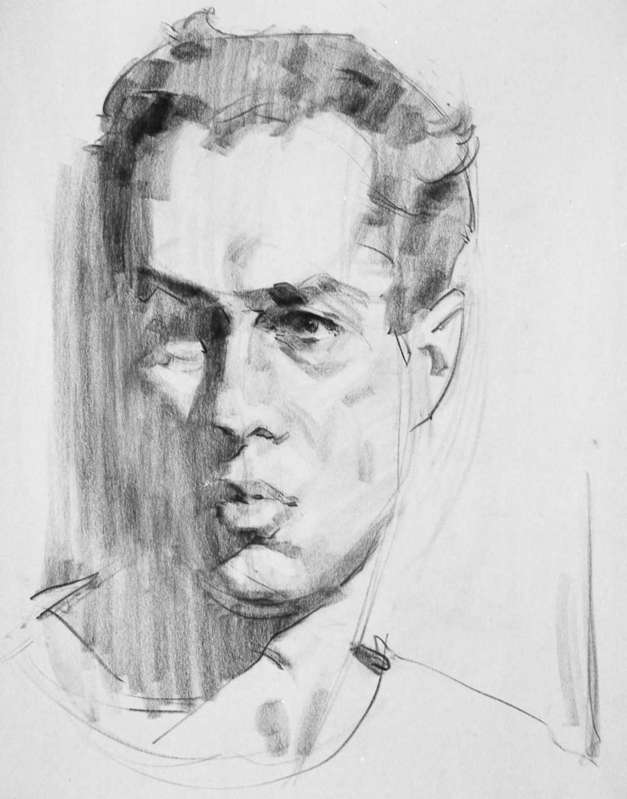 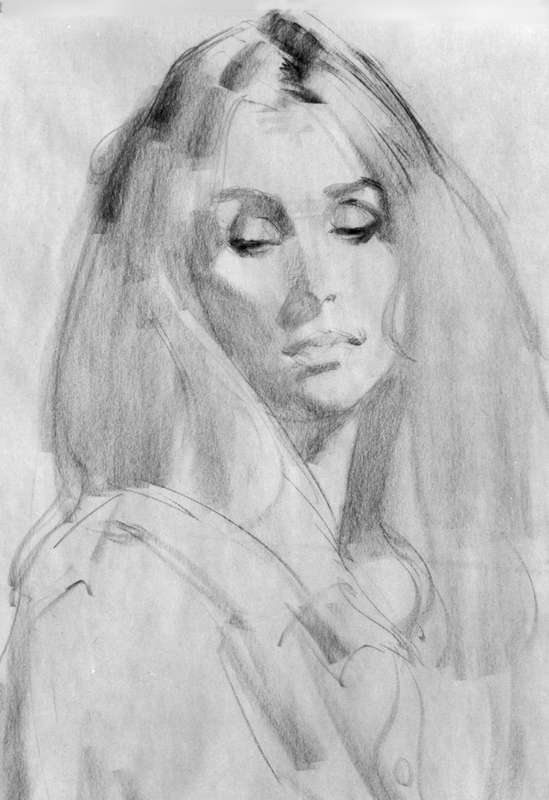 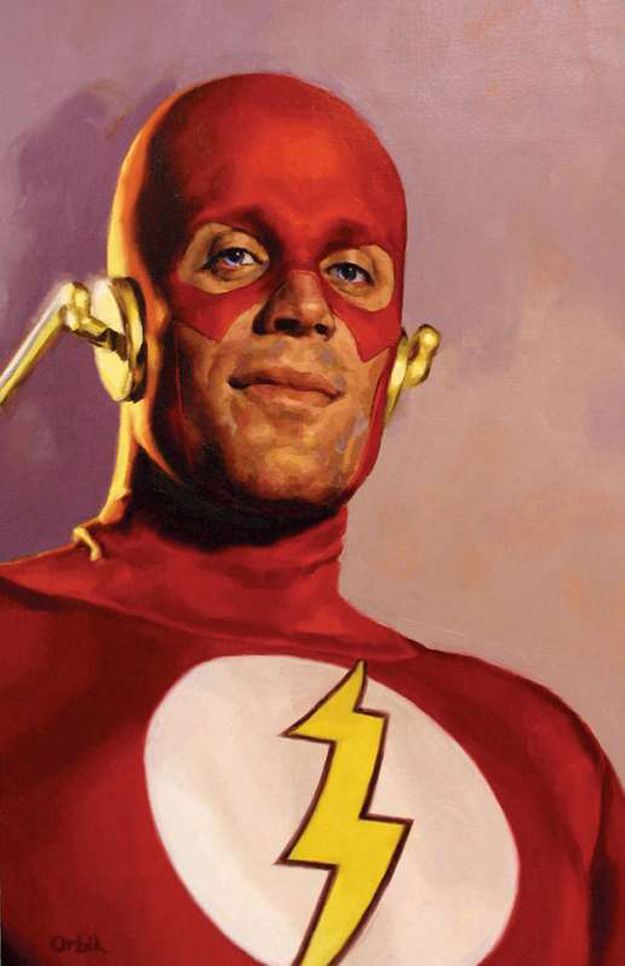 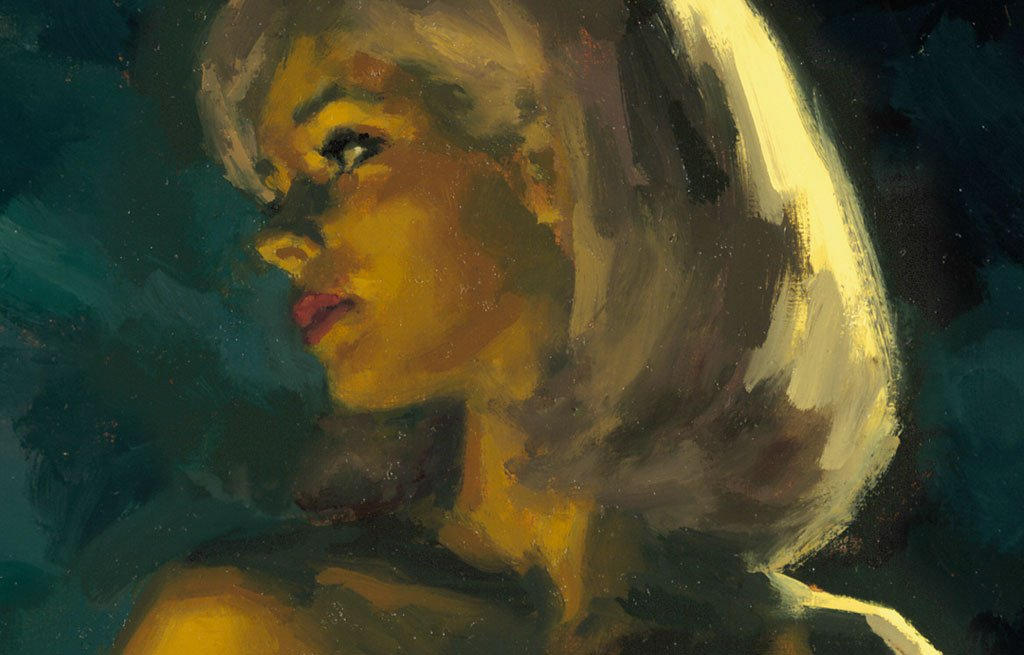 Ilya Yefimovich Repin (1844-1930) was one of the greatest Russian painters of the late 19th century.  His Wikipedia entry is here.

Perhaps his strongest field was portrait painting, though he also created historical, mythological and genre scenes.  In this post I dealt with a set of sketch portraits he made while working on a huge painting of the "Ceremonial Session of the State Council, May 7, 1901."  That painting was a panorama, a format he occasionally used.  The present post presents several other such works. 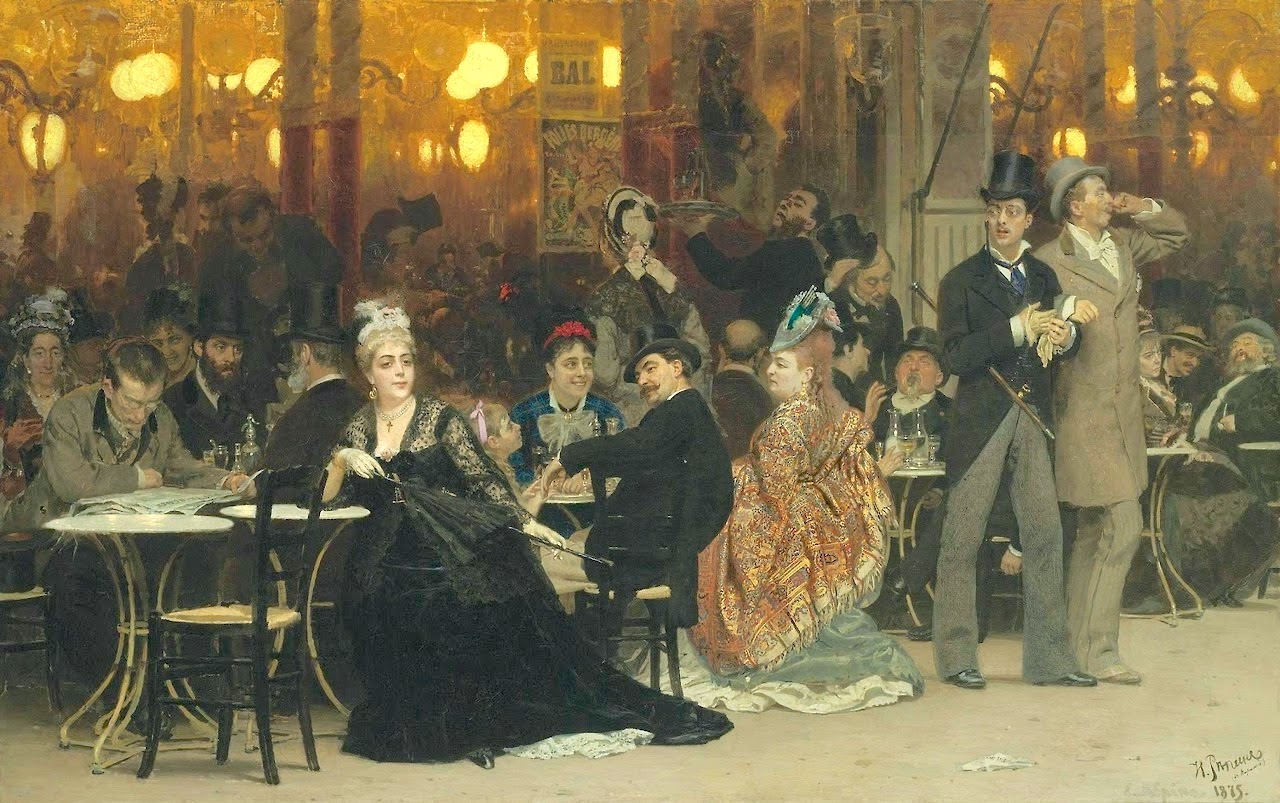 Parisian Café - 1875
Quite different due to its hard-edge detail.  Essentially a set of character studies.  Although he spent some time in France and Italy, the Wikipedia link does not mention that he studied there.  In any case, he was around 30 years old and his career was already well-launched. 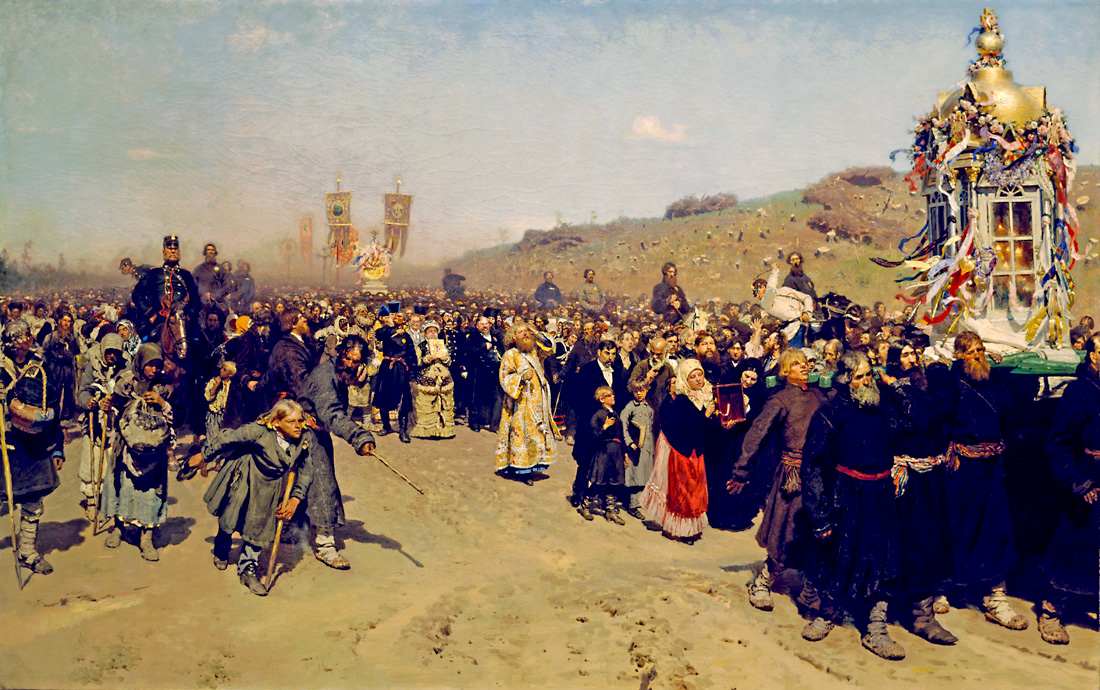 Krestny Khod (Religious Procession) in Kursk Gubernia - 1881-82
Another well-known painting.  Click on the image to enlarge. 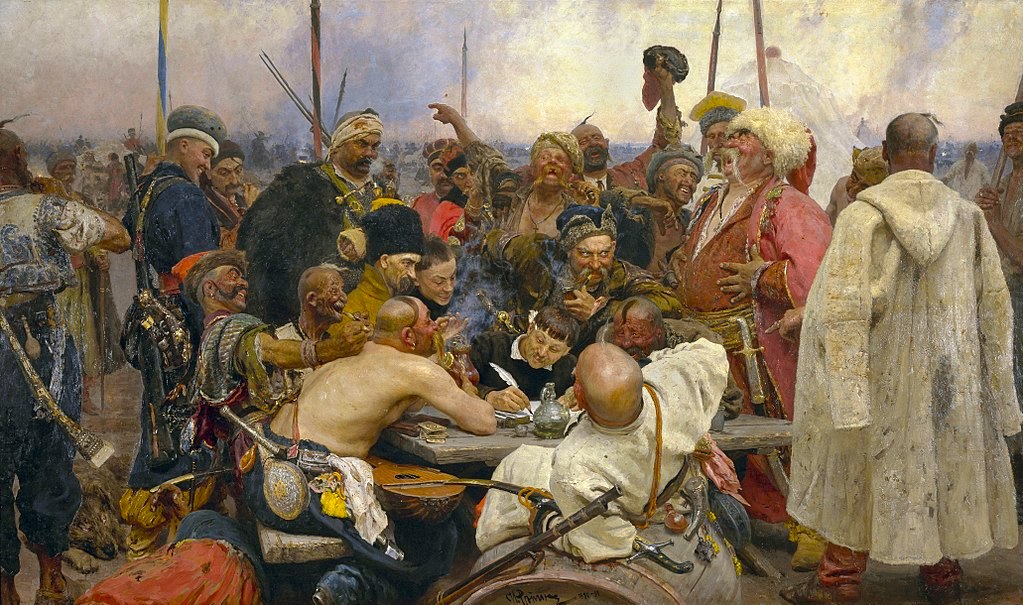 Reply of the Zaporozhian Cossacks to Sultan Mehmed IV of the Ottoman Empire - 1880-91
Another opportunity for character  studies. 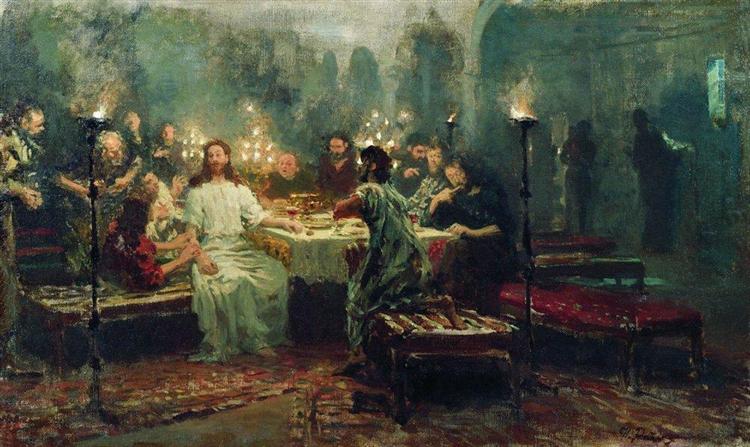 The Last Supper - 1903
More a sketch than a finished work. 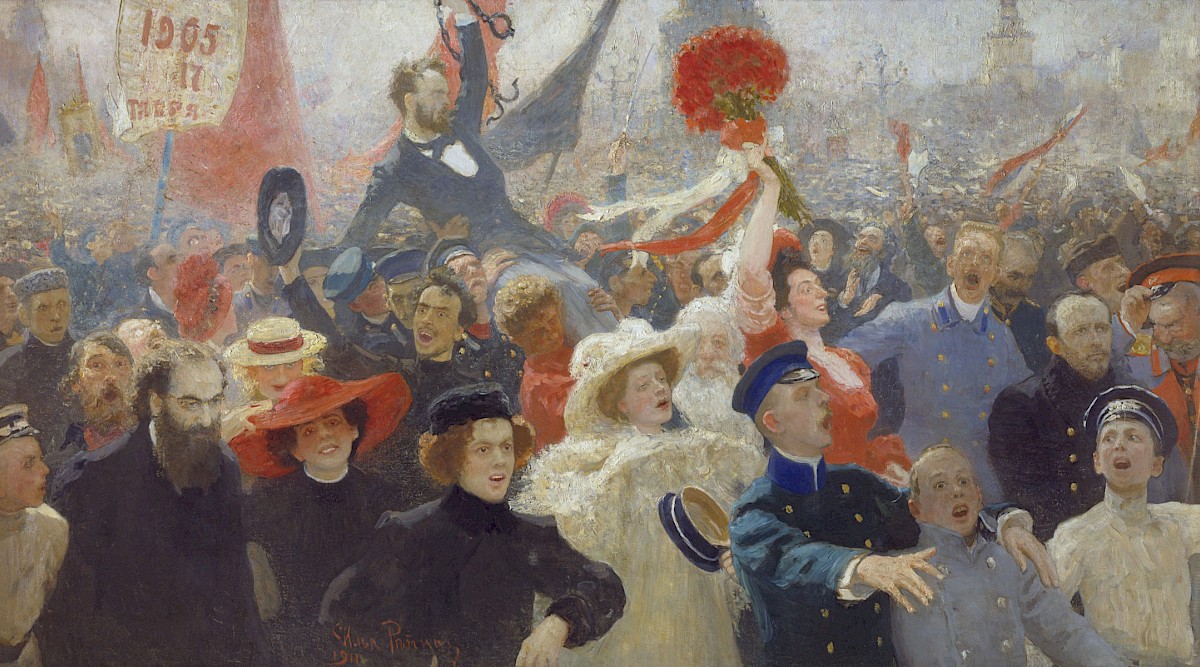 Demonstration on October 17, 1905 - 1907-11
Discontent with the regime following Russia's defeat by Japan and other problems.  Repin's style is softer here, though that might have been due to the foggy/smoky atmosphere being depicted.
Posted by Donald Pittenger at 1:00 AM No comments:

I recently wrote about the time it took for American newspaper comic strips to feature anatomically realistic depictions of characters.  Interestingly, the early instances were of female, not male, characters.

My research was admittedly incomplete, so I missed an early example: "Polly and Her Pals" -- Wikipedia entry here.

Polly was the work of Cliff Sterrett (1883-1964), considered by some as "cartoonist's cartoonist" --- the best of the best in that trade.  His Wikipedia entry mentions Li'l Abner cartoonist Al Capp stating: "Now, Sterrett—that's the guy who was the greatest."  His style became increasingly Modernist, as I posted here.

This Lembiek post mentions something neither I nor the Wikipedia writers knew:

"Because of arthritis, Sterrett was forced to hand over most of the art duties during the 1930s.  The daily 'Polly' strip was handled by his assistant Paul Fung from 1935 until the end of its run in 1942.  Sterrett continued to supervise and occasionally draw the Sunday page until his retirement in 1958.  The final episode of 'Polly and Her Pals' was published on 15 June 1958.  Other ghost artists that worked for Sterrett were Vernon Greene, John Kowalchik, Fred Schwarze and Bob Dunn."

Ghost or assistant comic strip artists were more common than most folks realize.  An important example is the famous fantasy illustrator Frank Frazetta who spent several years ghosting for Al Capp.  The best ghosts mimicked the strip creator's style almost exactly, so all the artwork in the Gallery below can be treated as Sterrett's.

As for the title of the present post, I cannot absolutely vouch that Sterrett always drew Polly's head in profile.  That said, none of the Polly panels I noticed on Google showed her any other way.  Below are some Polly snippets illustrating that point.  Click on them to enlarge. 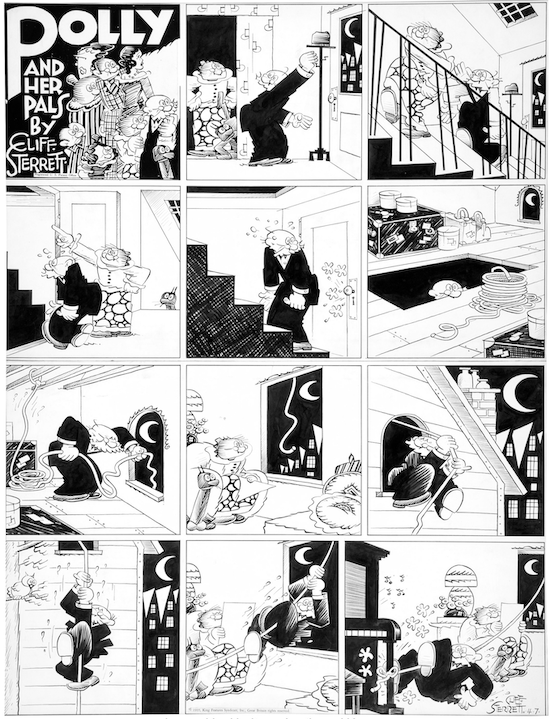 April 7, 1935
First, an example of a Sunday panel minus coloring that shows Sterrett's mature style.  Note that Polly does not appear in the action that features Paw, her father (though she can be seen in the title block).  As Wikipedia notes, he soon became the star of the strip. 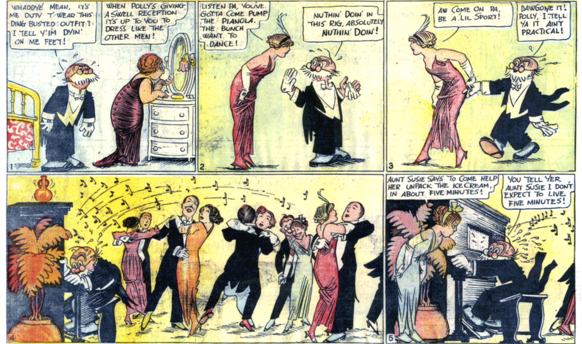 January 18, 1914
This extract from a Sunday panel appeared when the strip was about one year old.  Polly is shown in profile, though the most of the dancing ladies have full or partially full faces.  I have no idea why Sterrett didn't do that with Polly. 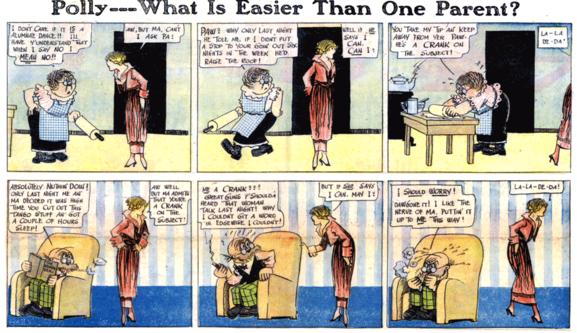 October 11, 1914
An out-take from later that year with five views of Polly, all with her head in profile.

Daily strip - June 13, 1934
Twenty years after Polly's debut.  Her body posing before a mirror is not in profile, but her head is, for practical purposes.

December 17, 1939
Sterrett made sure Polly had fashionable clothing and hairdos.  But her blonde 1934 hair is now brown.  And she's in profile, even in the header above the panel extract.

September 23, 1956
A late example, Polly in profile at the left.  Note Paw and his Modernist cat, "Kitty."
Posted by Donald Pittenger at 1:00 AM No comments: