In the Beginning: Ernest Hamlin Baker

A fairly lengthy biographical article about Baker is here.  Among other things, it mentions his time as a student at Colgate University, where he was a Big Man on Campus.

I know it's usually unfair to present artist's early work, but I'll do so now because I happened to come across some illustrations Baker made for the 1912 edition of Salmagundi, the school's yearbook.   Moreover, Baker entered college a few years older than normal, so he was more mature than the usual yearbook's student artist.

(The link has him entering Colgate at age 21, but that does not seem to jibe with the yearbook, whose content suggests he might have been 19 or 20.) 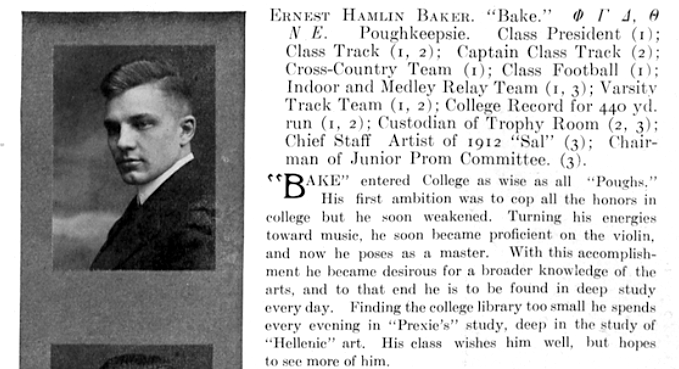 His yearbook entry.  The first set of Greek letters indicates that he was a member of Phi Gamma Delta fraternity. 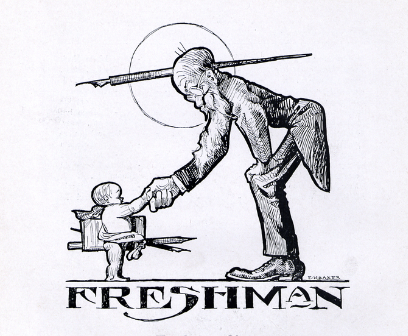 Introductory art for the yearbook's Freshman (entry) class section.   Following are illustrations for other classes and some college activities. 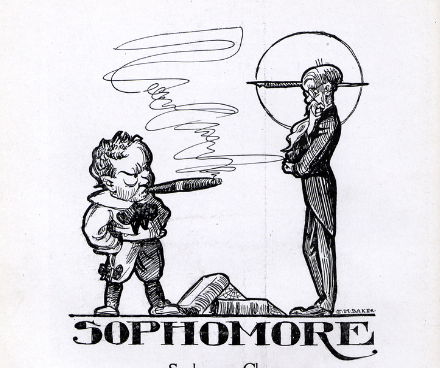 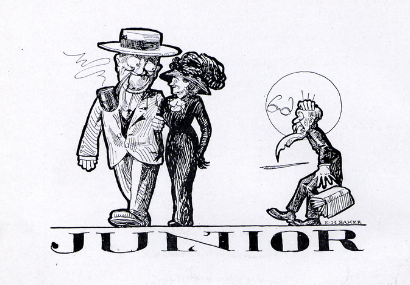 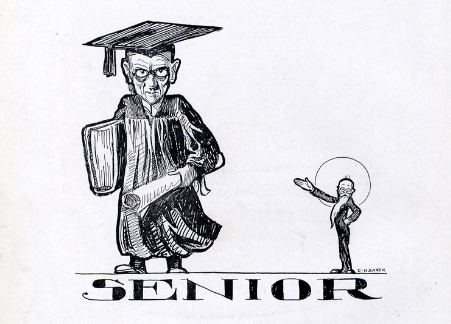 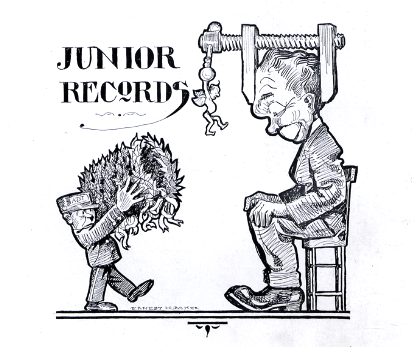 Although Baker's cartoon style in in line with the fashion of the day, hints of his carefully-drawn later work can be seen here. 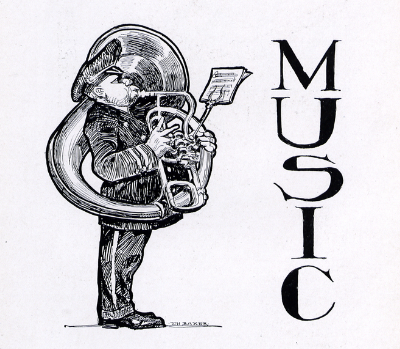 Posted by Donald Pittenger at 1:00 AM No comments:

Zdeněk Burian (1905-1981) was a Czechoslovak illlustrator best known for his depictions of prehistoric subjects.  His Englifh language Wikipedia entry is here.

The link does not mention his training, though it can be found in the French version.  He studied for a while at Prague's fine arts academy, but was mostly self-taught.  Since his father was an architect, he was exposed to illustration techniques while young.  That said, his technique changed little over his long career.

He was a very good illustrator with a feeling for action and atmosphere.  Wikipedia notes that once his work became known outside Czechoslovakia, it became influential in the field of paleontology illustration.

The images below show that his versatility extended beyond dinosaurs.

A Pterosaur in a science-fiction setting.

An illustration for "Tarzan of the Apes" Chapter VIII.

Shooting a leopard.  Excellent depiction of the hunter as well as that of the beast.

Sagrada Familia from a Higher Perspective

I was in Barcelona November 2021, took photos of the Sagrada Familia, and posted about its exterior details here and its interior here.

I was in Barcelona again early October 2022, and took more photos of the exterior.  What makes these pictures somewhat different is their viewpoint.  It seems we stayed one night in a nearby apartment building on its fourth floor (fifth floor, in American terms).  That way, I was looking more at the Sagrada than up at it.

Some of the photos I took are presented below.  Click on them to enlarge. 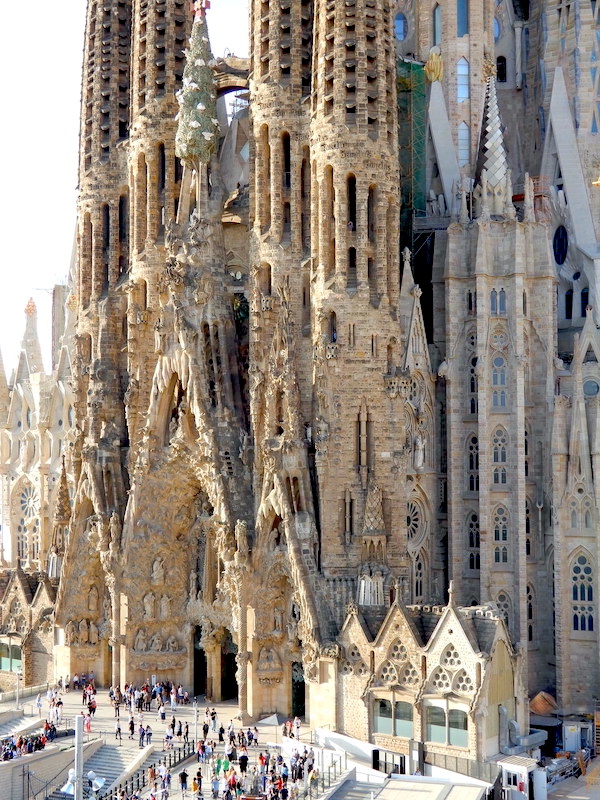 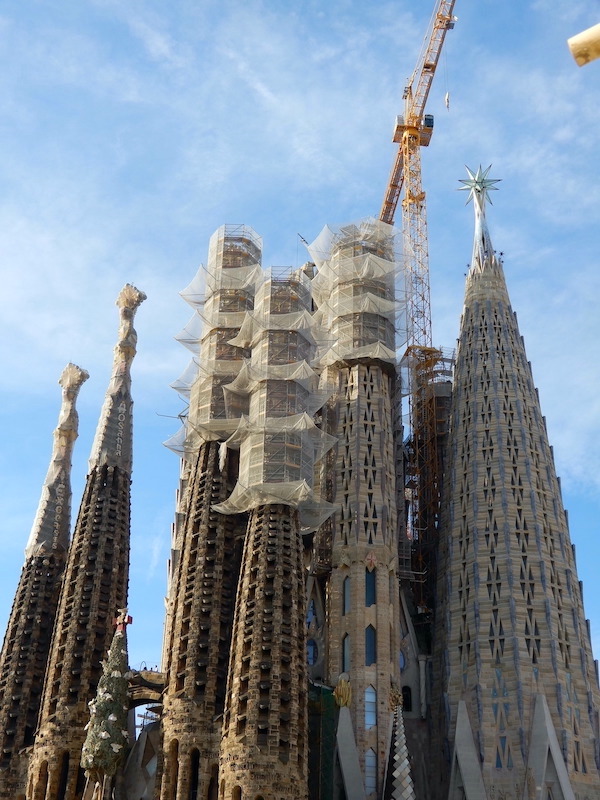 Looking up.  It seems that some of the original towers are getting spruced up. 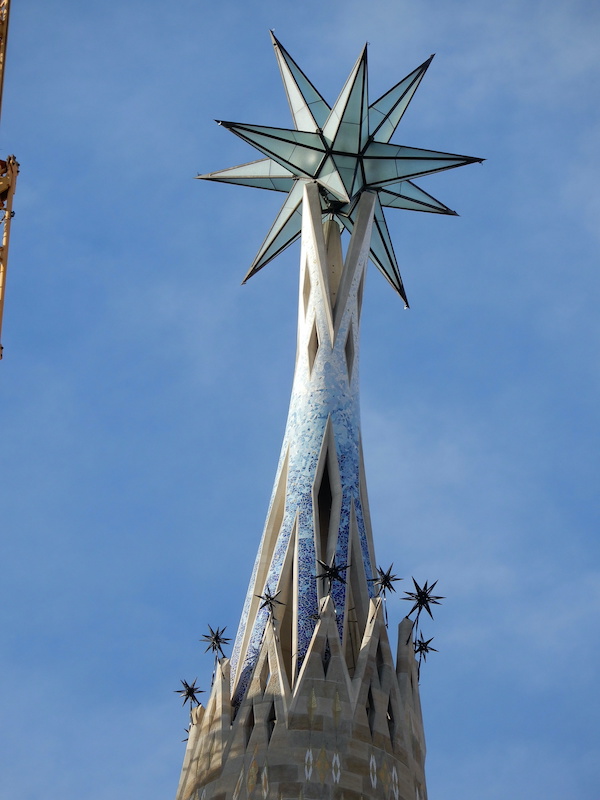 Top of the Virgin Mary tower.  The year before, the star was still at ground level, awaiting placement. 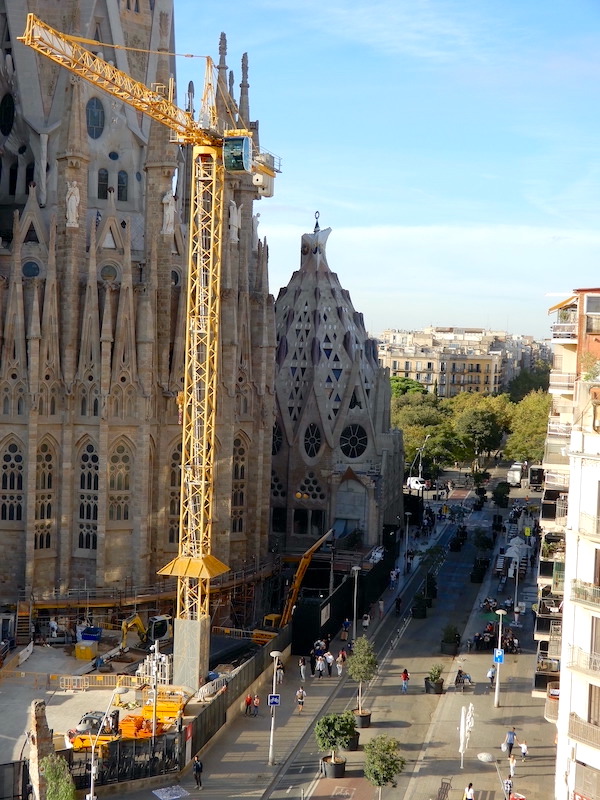 Looking west along the north side of the Sagrada. 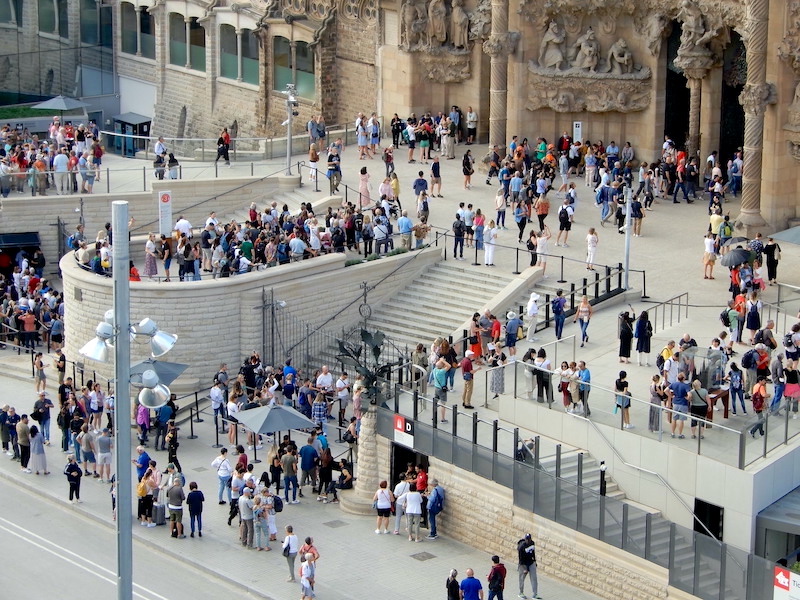 Tourists.  Some at the right are clustered around a model showing future additions to the building.  Note how small they are relative to even the east entrance. 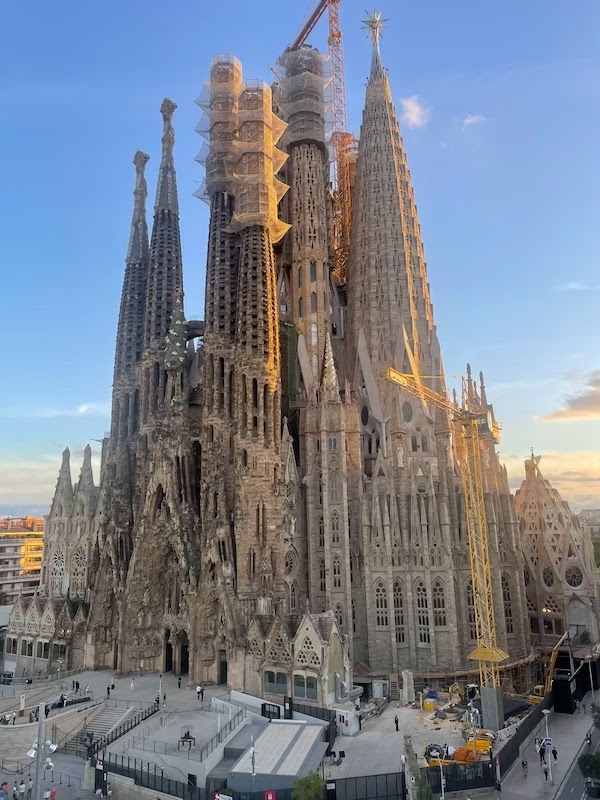 Taken early evening on my iPhone.  The sun is about to set in the west.  Tours have been closed by this hour. 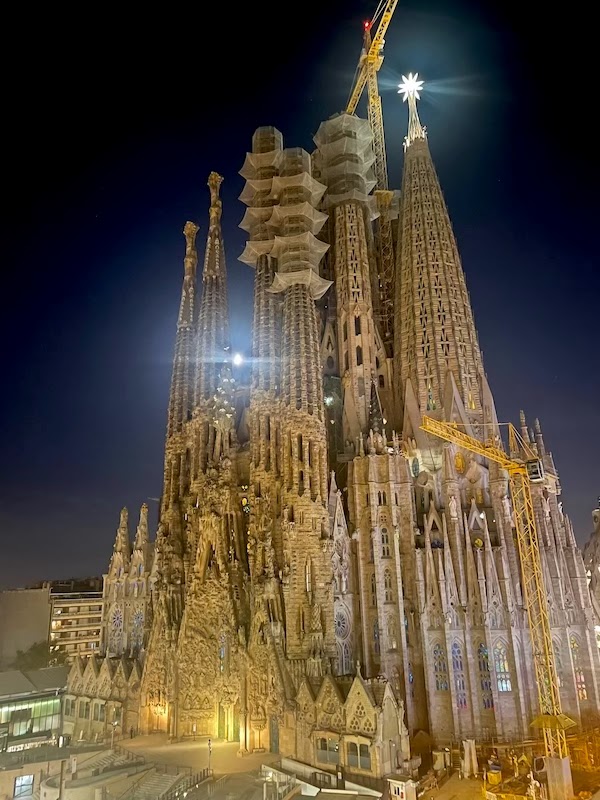 Sagrada Familia is lighted after sunset.  What appears to be a light shining between towers is the moon. 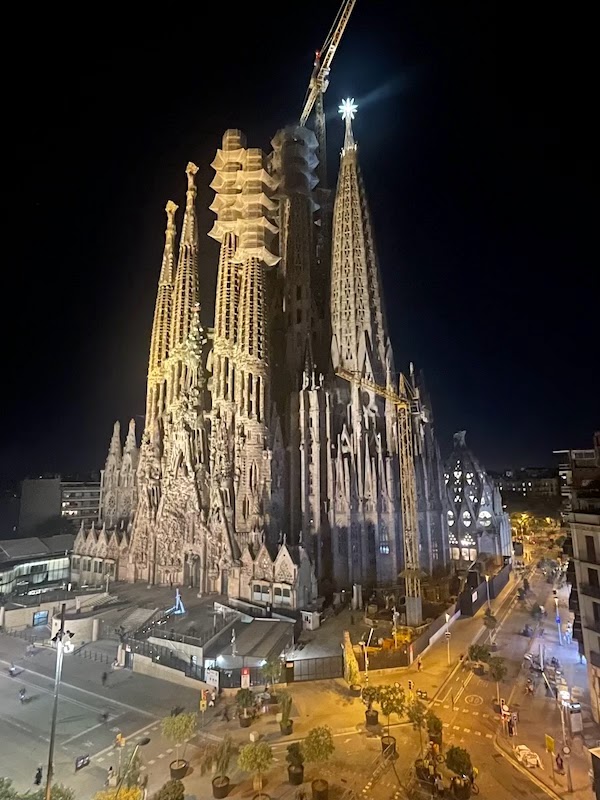 Later view taken by my iPhone.
Posted by Donald Pittenger at 1:00 AM 1 comment:

John Gannam - né Fouzi Hanna Boughanam - (1905 or 1907 - 1965) was a highly skilled and respected illustrator active from the 1920s until his death at age 59.   Besides being reclusive, other departures from the norm were his extensive use of watercolor and that he apparently was totally self-taught.

Another example of multiple illustrations with a common theme is bedroom scenes, the subject of today's post.

One reason for those bedroom scenes was that Gannam was contracted to illustrate advertisements for Pacific Mills' bedsheets.  But he also painted some bedroom scenes under other circumstances. 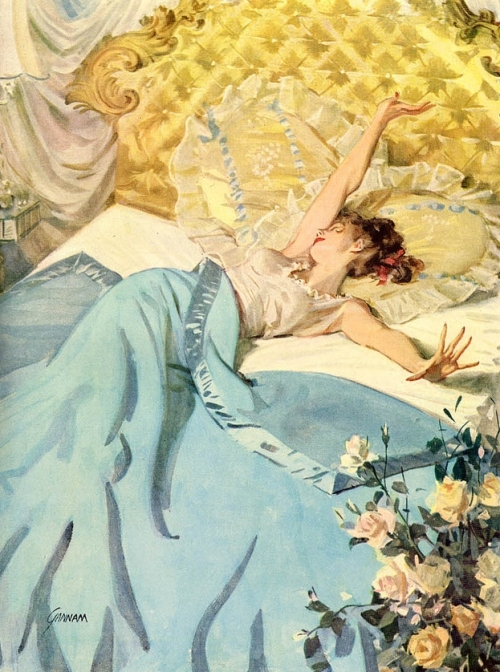 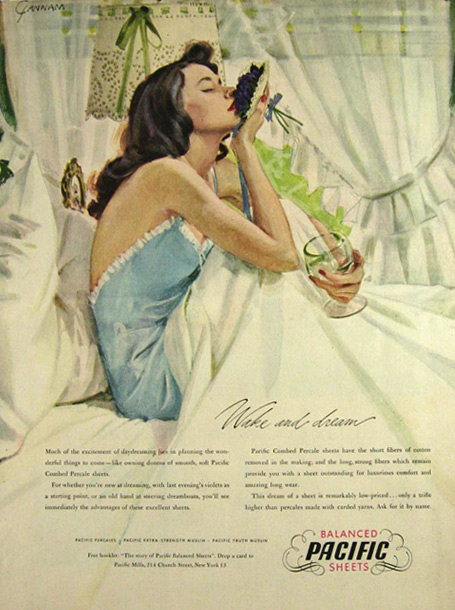 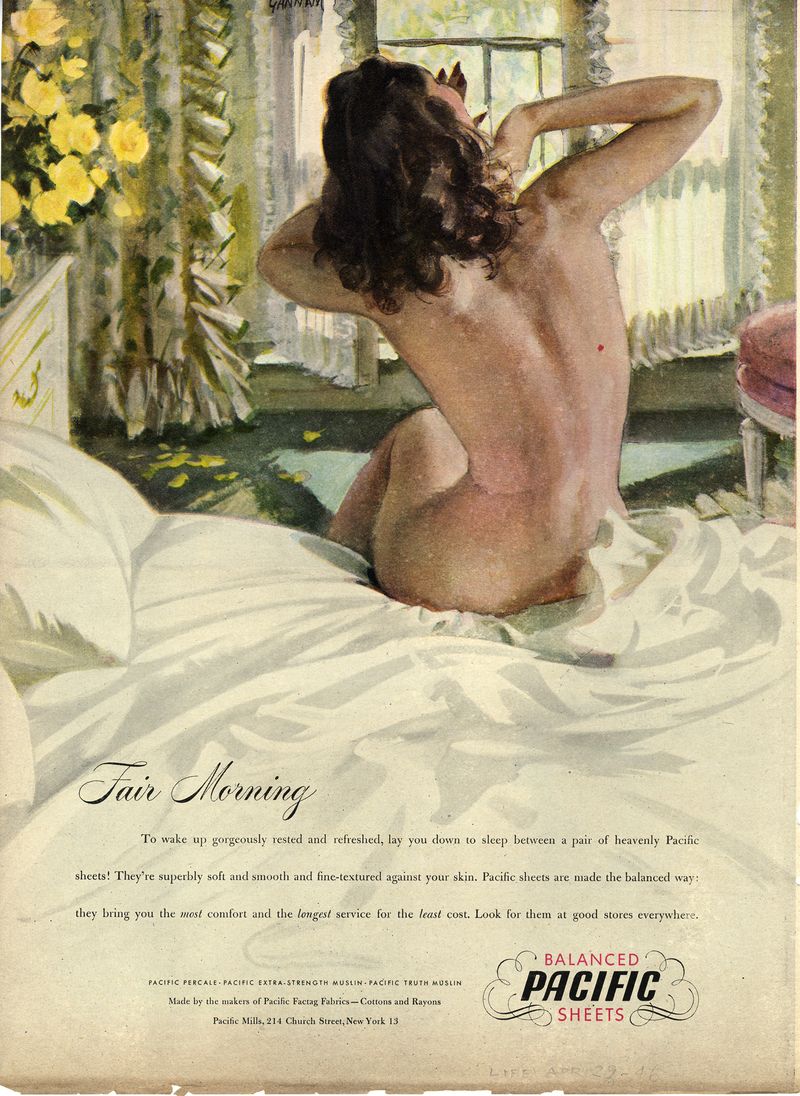 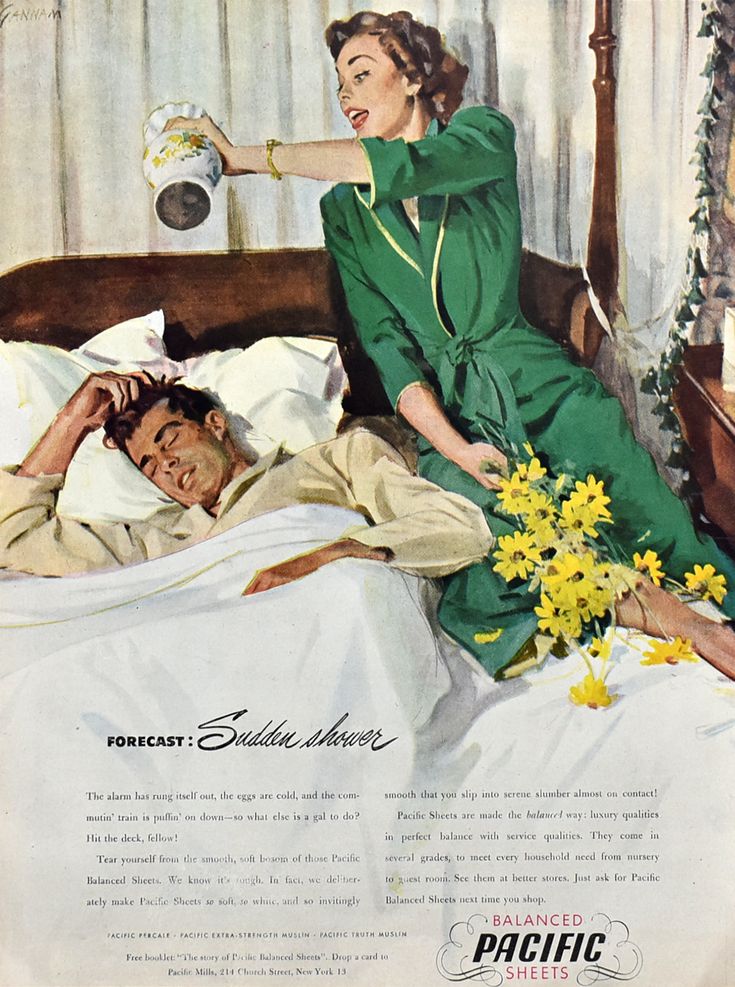 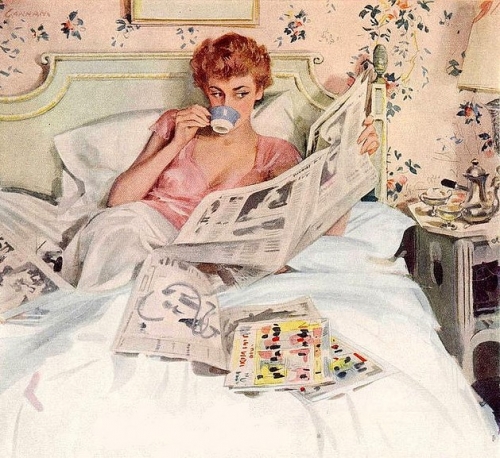 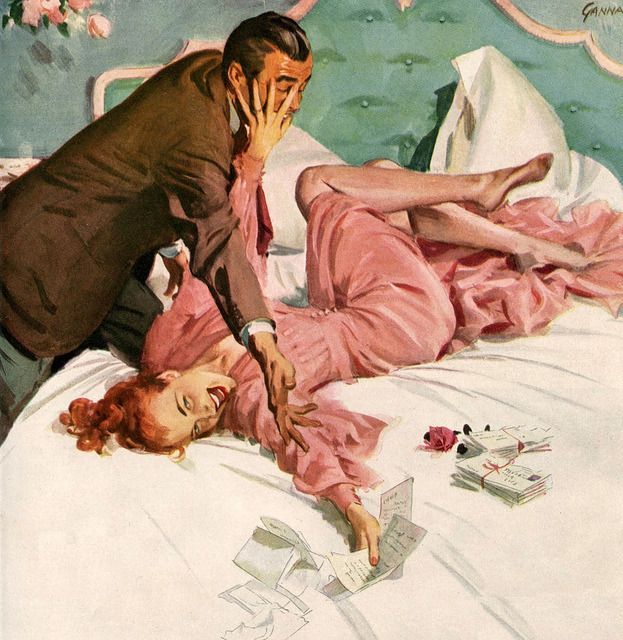 I'm not sure if this was for Pacific Mills or was a story illustration. 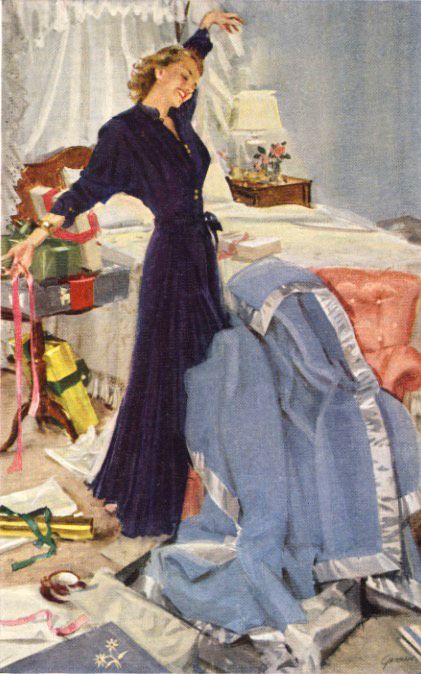 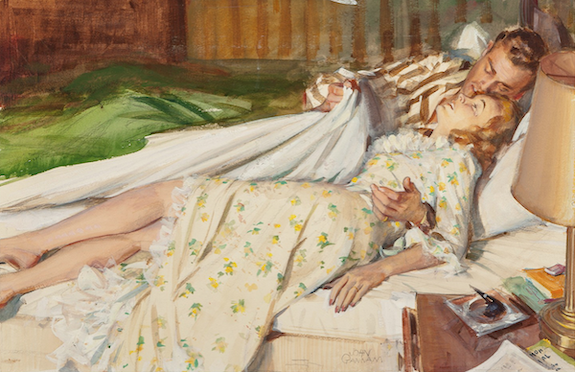 For the story "Guest Husband," Ladies' Home Journal, March 1946.
Posted by Donald Pittenger at 1:00 AM No comments: