Sonia Delaunay (1885-1979), Wikiperdia entry here, was a Modernist designer of note who during the 1920s and early '30s focused largely on cloth patterning for women's fashions.

In this post I present contemporary photos of some of her efforts.  Of course, they were taken black-and-white because color photography technology was still fairly primitive in those days.

Her patterns are geometrically based.  They are also "busy."  Perhaps too cluttered-looking from today's perspective.  Yet interesting.  Take a look. 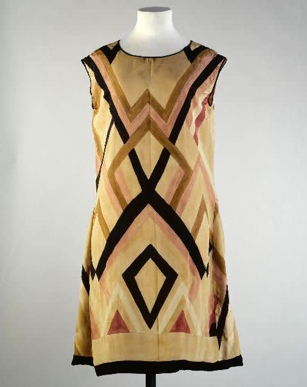 A similar pattern top as worn by a model. 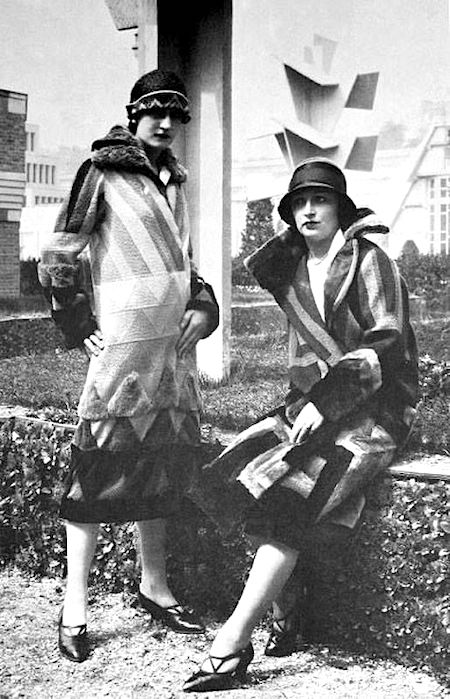 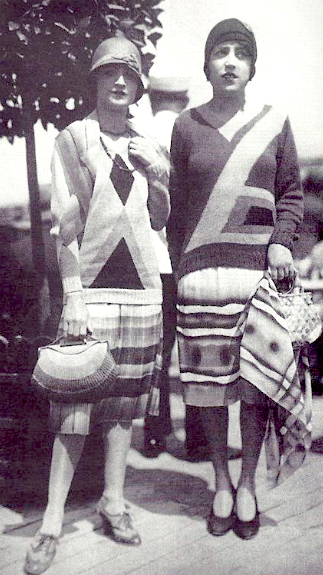 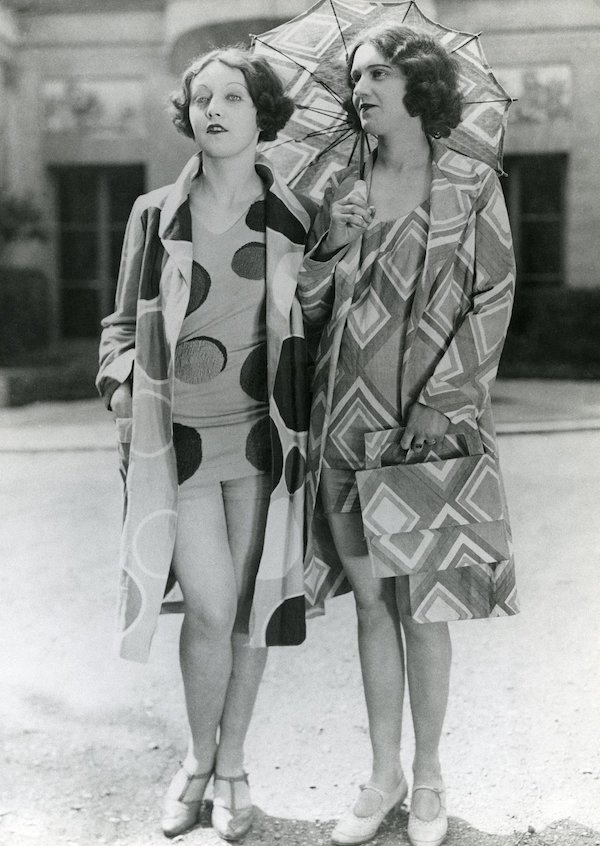 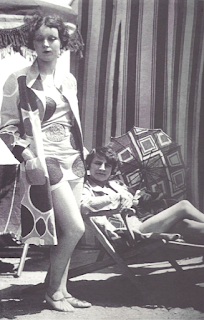 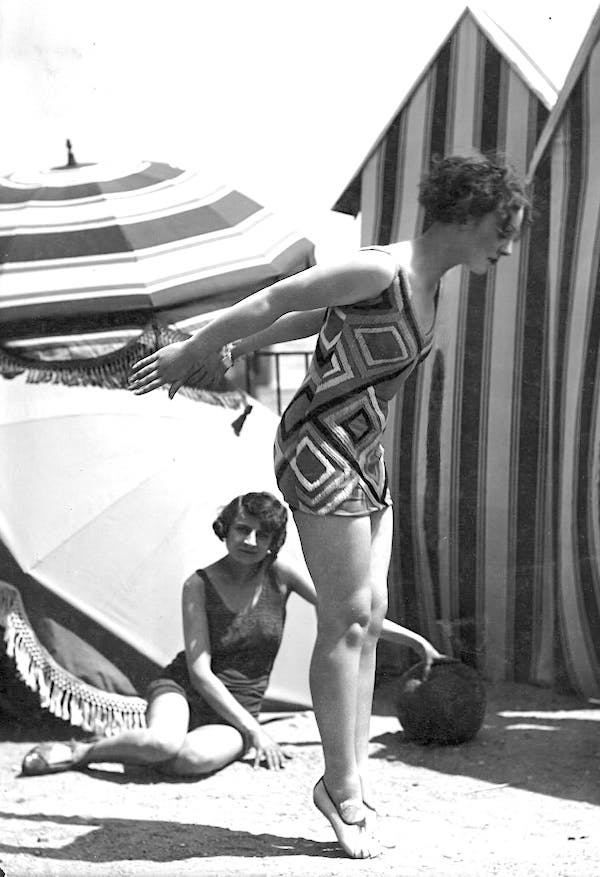 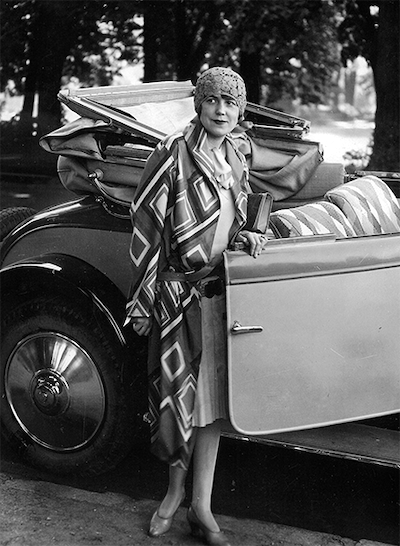 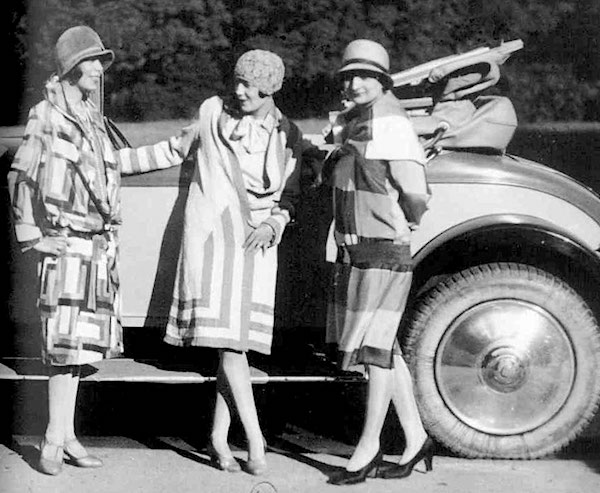 Modeling clothing in front of the same car. 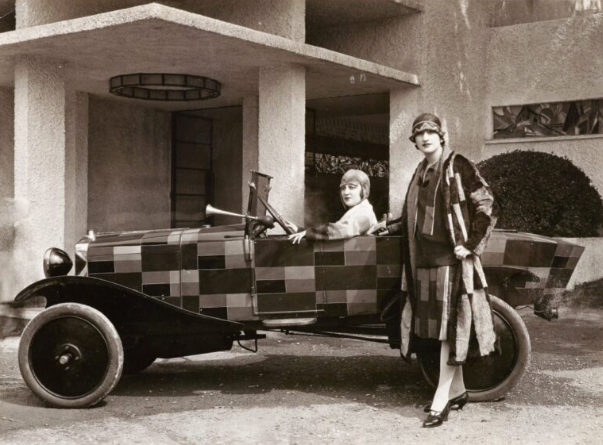 Sonia even applied her patterns to a car, in this case a Citroën B12.

Posted by Donald Pittenger at 1:00 AM No comments:

Thomas Maitland Cleland (1880-1964), brief Wikipedia entry here, was an art director and graphic artist of note during his career.  Perhaps he is best known for creating the first cover of Fortune magazine, dated February 1930.  The magazine was under development prior to the October 1929 Wall Street Crash, and inertia and perhaps thinking that recovery would happen soon, it was launched essentially on schedule.  Cleland was its art director / designer as well as cover artist.

Today's post features work he did for what I believe is a brochure for model year 1928 Cadillac automobiles.  Each illustration features a view of a particular model (such as Roadster), and places  it in a luxury setting he deemed appropriate.

As a former commercial art major and current writer about automobile styling (my blog on that subject can be found here), I find his work particularly interesting.  So might readers interested in Deco/Moderne cum-traditional graphic arts styles of those times.

Click on images (via the Detroit public library) to enlarge.

Fleetwood Transformable Town Cabriolet
Posted by Donald Pittenger at 1:00 AM No comments:

From time to time I present multiple portraits of famous or well-known people.  And I even stoop to featuring various artists' versions of fictional characters.  Such it is with today's post, the character being the detective Nero Wolfe.

Wolfe is described as being Montenegro-born, grossly heavy, having a large head, dark hair and a long nose.  His age is mid-50s.  An integral character in the books is Wolf''s assistant Archie Goodwin who narrates the stories and performs much of the legwork, providing information for Wolfe to solve the case.  Goodwin is not described other that being fairly tall and fit, also apparently attractive to women.

The problem for illustrators is that Wolfe is hyper-sedentary, almost never leaving his West 35th Street New York brownstone digs.  Most of the time crime work is involved, he's simply sitting behind his office desk drinking beer.  Not much dramatic action to portray. 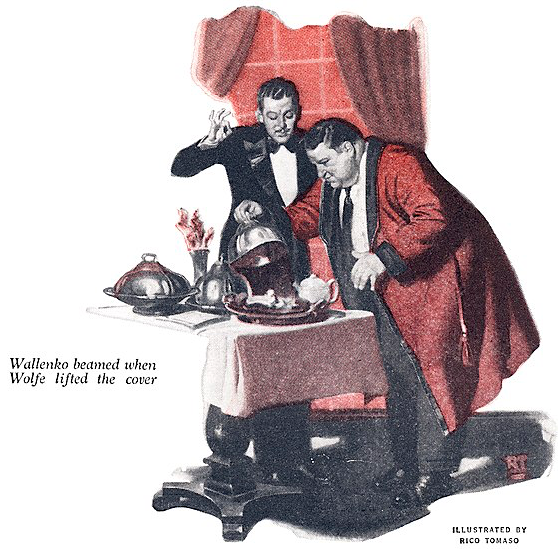 What seems to be an early illustration, this by Rico Tomaso. 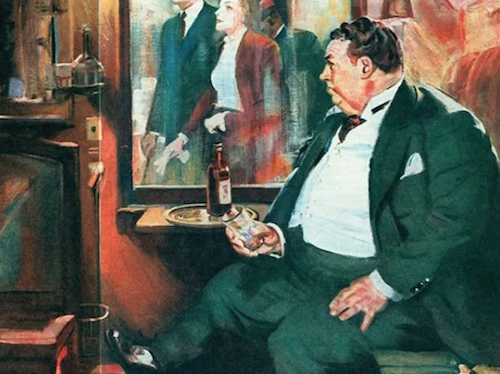 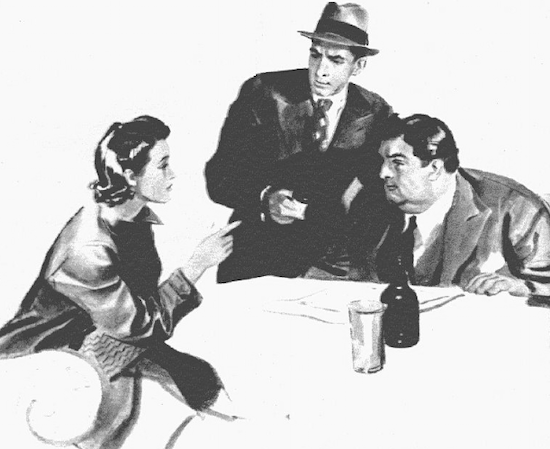 I don't have information regarding who did this illustration.  Seems to be from around 1939.  That would be Goodwin in the background. 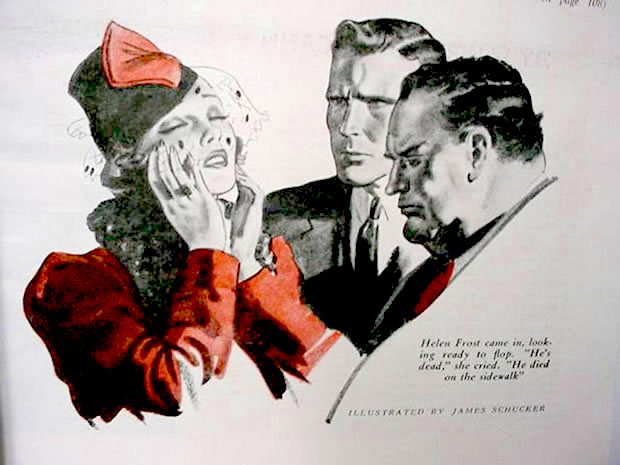 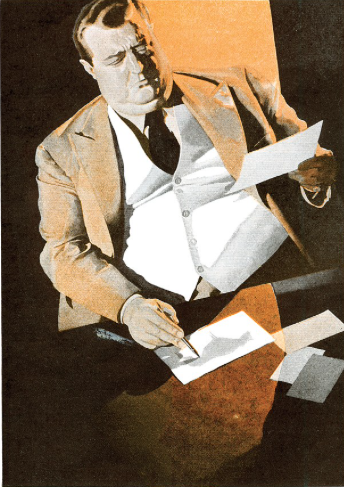 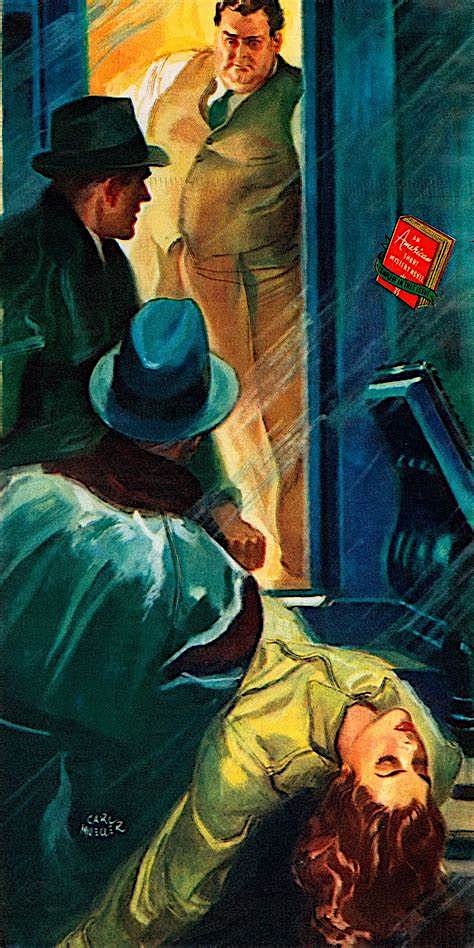 Same artist and magazine, but in 1940.  Here Wolfe is actually standing and there is serious action. 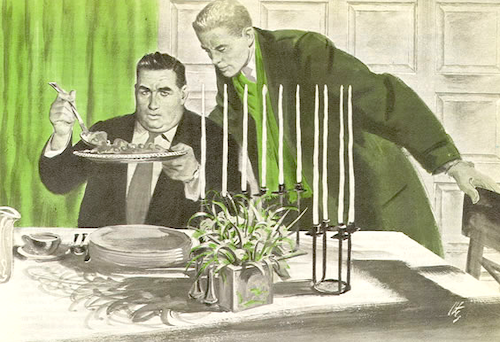 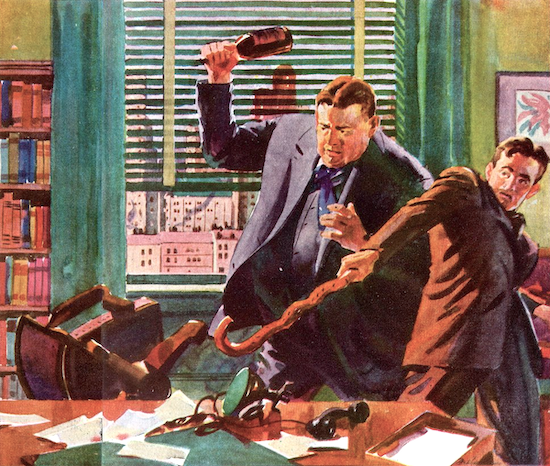 Fred Ludekens, who also did cover art for the Post.  The story is Fer-de-Lance, and Wolfe is dealing with a deadly snake. 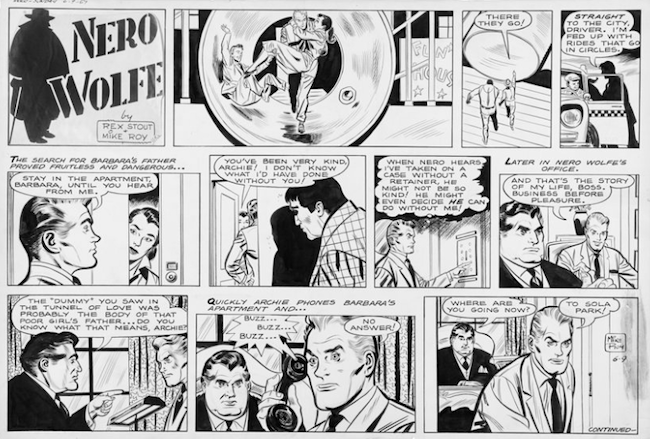 There was a short-lived mid-1950s Nero Wolfe comic strip.  The artist shown here is Mike Roy. 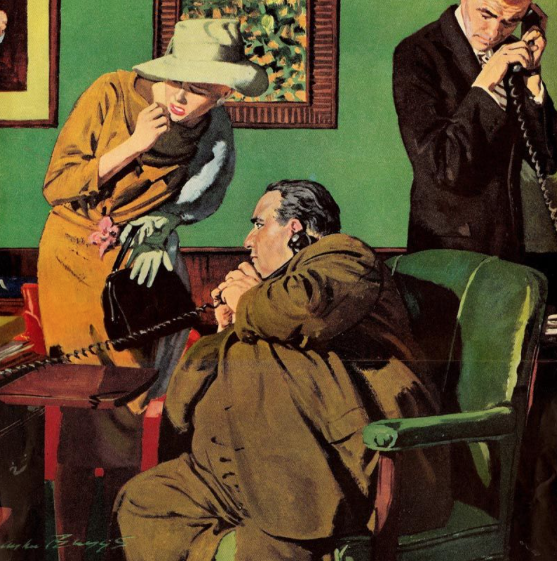 An illustration probably for the Post by Austin Briggs.

Archie Goodwin as portrayed by Briggs in the Post, 21 June, 1958.  I think this version of Archie corresponds best to my own idea of him.
Posted by Donald Pittenger at 1:00 AM 1 comment:

Alexandre de Riquer i Ynglada, 7th Count of Casa Dávalos (1856-1920) is probably best known for his poster work.  But he also painted, engraved, and wrote poetry and other works.  Some background inforation is here, but from there you can link to his Catalan language Wikipedia page for greater detail.

Although Riquer was a Count, like many other late-1800s nobility he was not a rich one, so had to earn his living.  Moreover, his art training was not done in a fancy city such as Paris or even his home town of Barcelona.  Instead he went to Béziers, France.

Since he was talented, it didn't really matter where he got his art training.  Like most of us, he learned on the job.  And via travel to Italy, England and elsewhere.

The examples below are mostly of posters, because they were the internet items that most caught my eye. 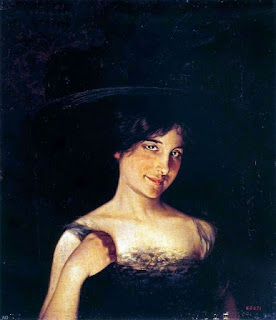 Ritratto di mujer
I have no information about this, and the image is blotchy, yet interesting. 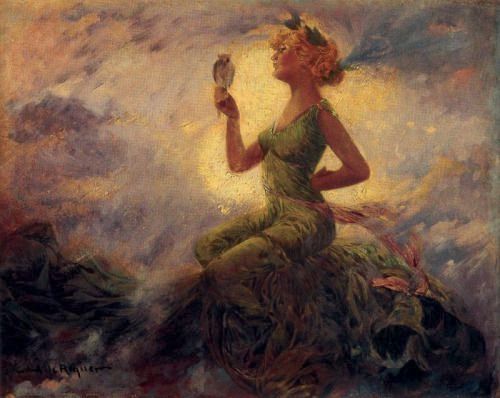 Nymph in the Moonlight

Four Seasons, Spring - 1899
The seasons were a popular topic for poster artists of the day. 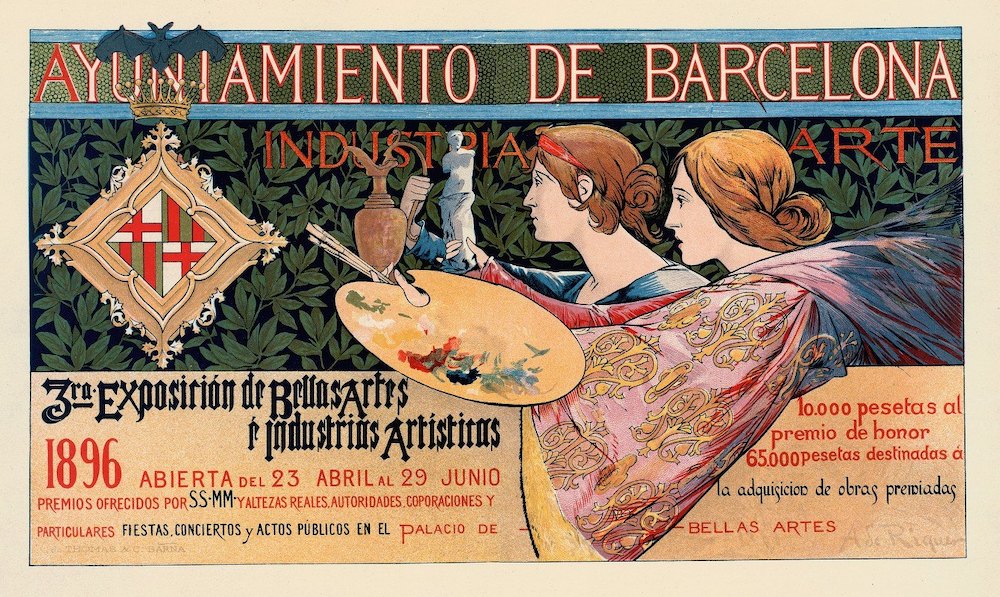 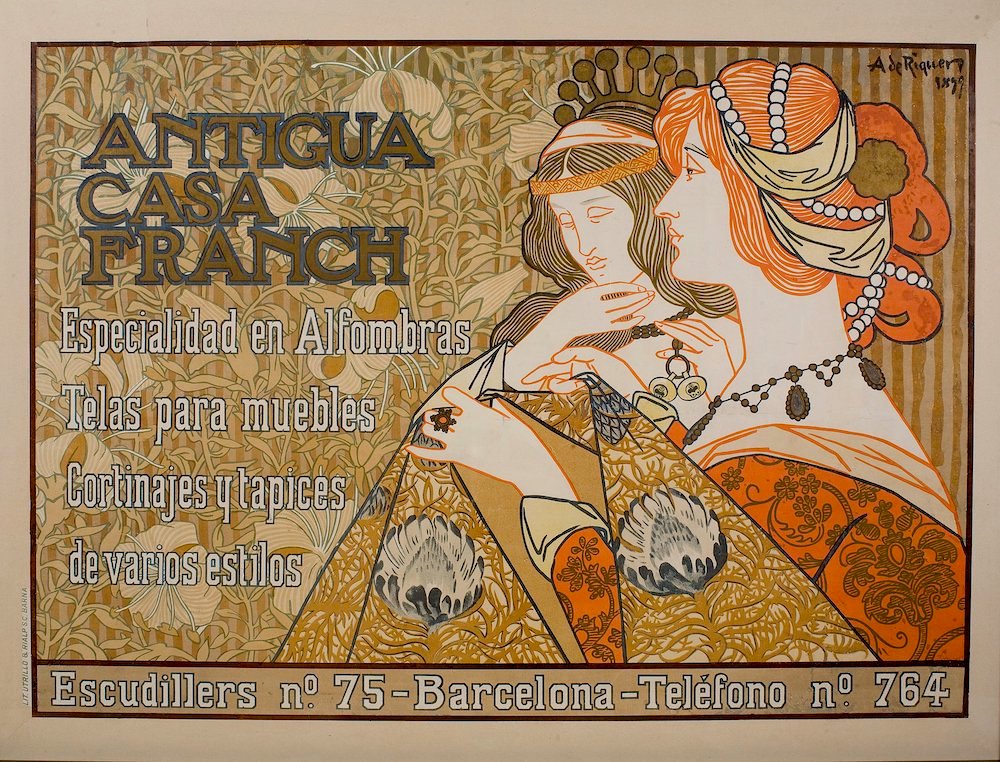