My old stomping ground, the School of Art at the University of Washington, held an exhibit featuring three former faculty members including its first chairman Walter F. Isaacs (1886-1964). I went to see it because two of the artists (Ray Hill, 1891-1980 and Boyer Gonzales, Jr., 1909-1987) were there when I was. But I was most anxious to see Isaacs' work because he was active during a period that interests me greatly: 1920-1945.

Why those years? Because they were the time following the surge of art movements (Cubism, Fauves, Futurism, Blaue Reiter, etc., etc.) in the years just before the Great War. Following the war many avant-garde artists experienced a what-do-we-do-next? realization as the number of new movements fell off drastically. Meanwhile, artists trained traditionally had to come to terms with modernism because the art market seemed to be drifting in that direction and the matter of bread on the table could not be totally ignored. So many artists struggled stylistically, and it is the art they created while struggling that interests me.

Isaacs was raised on an Illinois farm, but other than the fact that he attended college somewhere, I have no information about what he did from the time he left the farm until he enrolled at Chicago's Art Institute in 1914 when he was about 28 years old. He then went on to teach at what is now Northern Colorado University in Greeley, but left to study in France in 1920. In 1923 he was hired as art professor at the University of Washington and headed the art department until his 1954 retirement. While at Washington he continued to travel to Europe in order to experience what was still the world's leading art.

Below are photos I snapped while viewing the exhibit. They are definitely of the quick-and-dirty sort, uncropped, shot with the lens set to wide-angle so that the focusing is (mostly) okay. The exhibit designers were astute enough to hang a series in chronological order; these are the first ones shown. 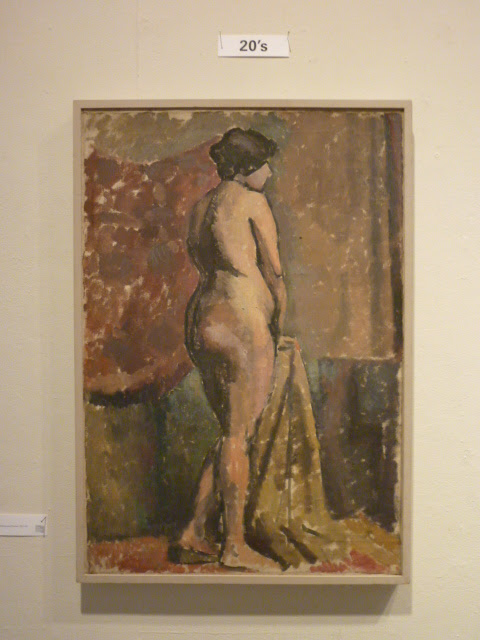 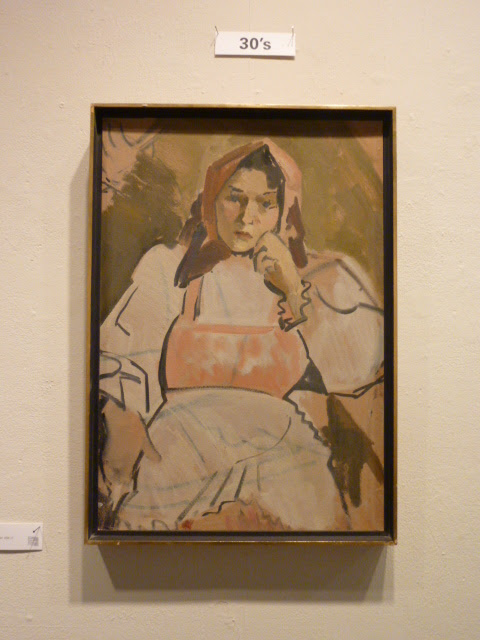 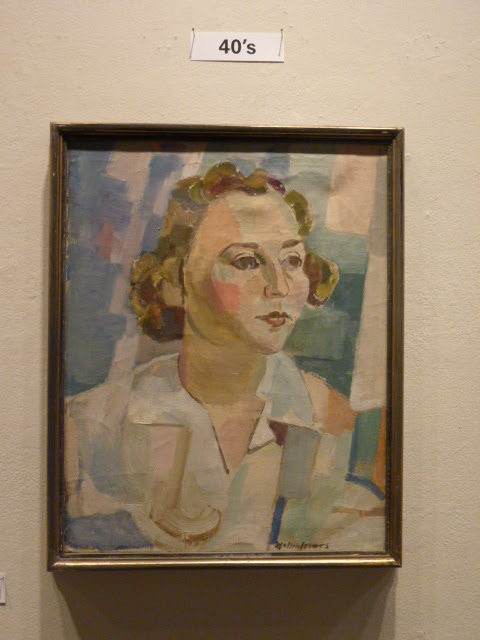 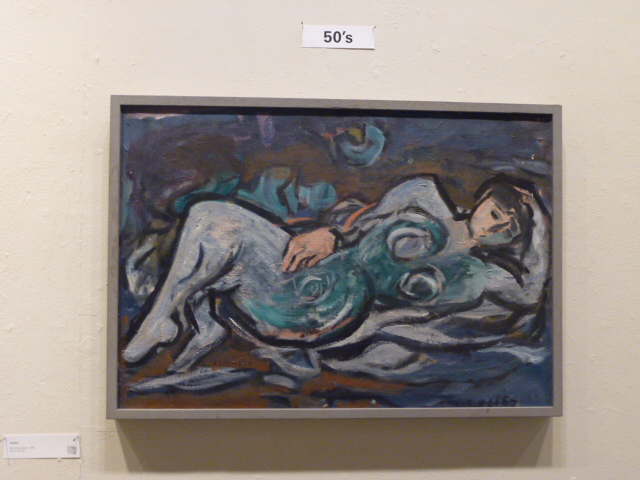 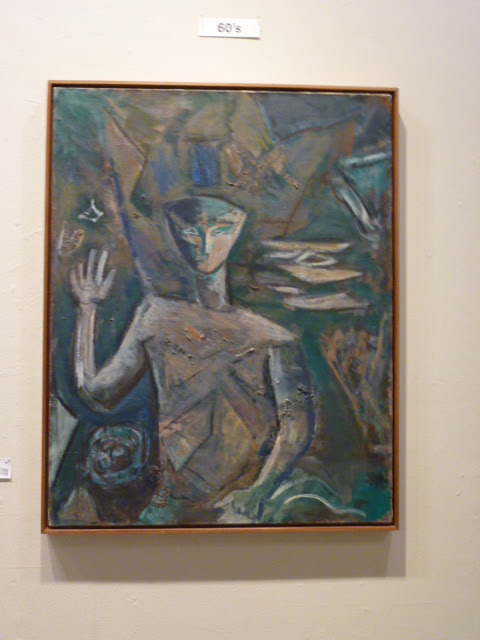 From 1960s
It seems that Isaacs was never truly avant-garde. In fact, his work seems to lag about ten or 15 years behind what passed for cutting-edge during the confused decades from the start of the Great Was until the end of World War 2. For instance, note that he seems to have avoided Surrealism, the most prominent movement of the 1930s, and that he failed to surrender to pure abstraction, if the images in the exhibit are any guide.

Nevertheless, his paintings are influenced by modernism. Shapes are simplified and the appearances feature flatness, not depth. 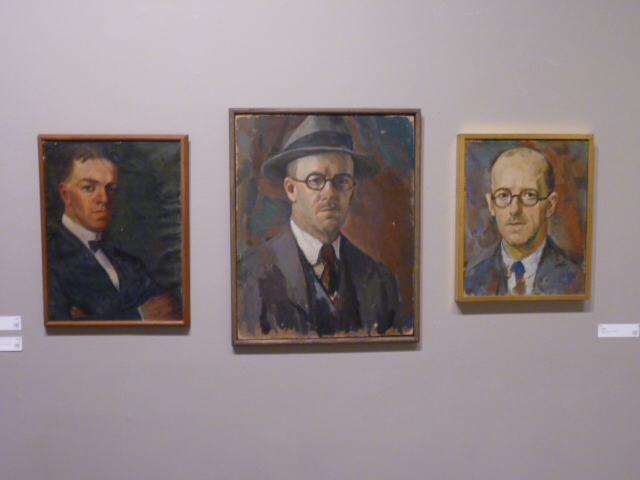 Self-portraits
The portrait at the left was done in 1909 when he was in college. The center one dates from around 1930 and the right-hand one is thought to have been done in Paris in 1928 or thereabouts. 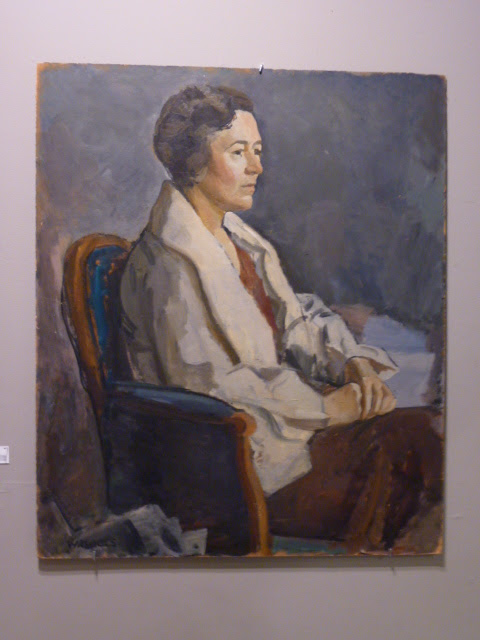 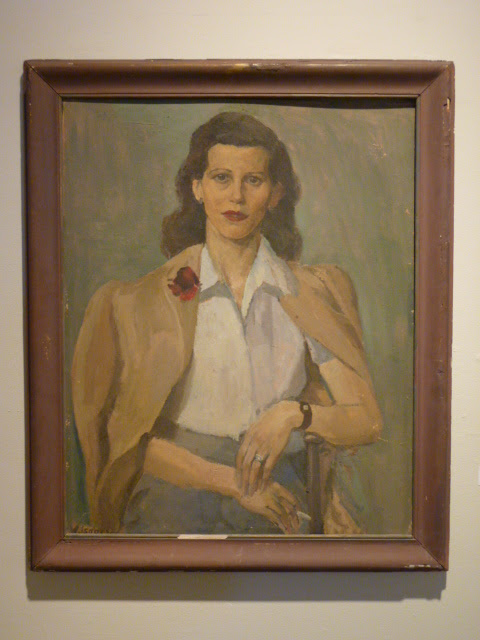 Babette Hughes - c.1942
Isaacs became more conservative or traditional when painting portraits, though the modernist characteristics of simplicity and flattening are still evident.

I have no proof, but the paintings shown above suggest that Walter Isaacs was most comfortable painting in the slightly-modern mode he practiced from 1920 into the 1940s. His later works strike me as being a bit forced, as if his role as art department chairman required him to keep up with both the times and the work of younger faculty members who were more comfortable with modernism.

Forgive my ignorance, but I assume that portrait painting changed when portrait photography became widely available? Did it change again in response to colour photography?

derieme -- I think that it was modernism itself more than other factors. But the availability of photography made it easy to rationalize the modernist touches by claiming that (1) the artist was getting to the core of the sitter, and/or (2) the artist was expressing his personal reaction/evaluation/etcetera of the sitter.

The NPG in London is fascinating because, by the 1920s and 30s, most of the portraits displayed are in the modernist mode even tho' photography had been around for 80-some years by then. So artistic fashion in play.

Today most commissioned portraits in the USA tend to follow traditional practices.

I believe the portrait done in the 1940s is of my Great Aunt. Do you have any info on how I could track it down? Thanks!

Snowboarder -- Try contacting the University of Washington School of Art and mention the fall 2011 exhibit I mention in the Post. They might be able to steer you to someone who assembled the paintings.