This post deals with the slow introduction of realistically-depicted characters in American comic strips.

Details are in the image captions below.  Please note that I didn't undertake a hardcore scholarly study of the subject, though I did rely on a few books in my reference library to refine my memory.  Therefore, take the examples below as indicative, though not necessarily "firsts" in terms of appearance. 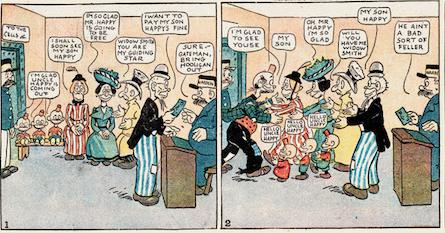 Happy Hooligan by Frederick Burr Opper - 6 November 1902
This important strip dates from 1900 and the character depictions are in line with the norms of the time.  More information is here. 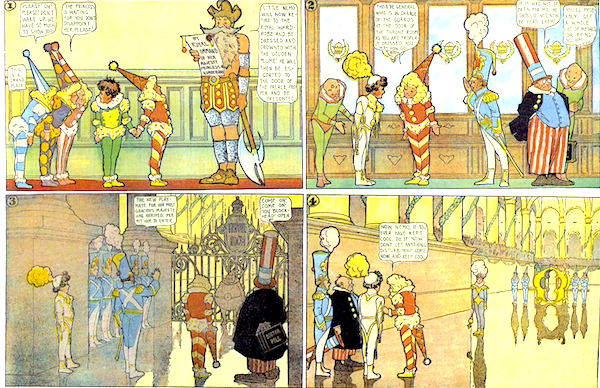 Little Nemo in Slumberland by Winsor McCay - 24 June 1906
On the other hand, Little Nemo from 1905 was exceptional in terms of depiction, as can be seen in this example.  Nevertheless, it was years later before naturalistic cartoon characters became common.

Betty by Charles A. Voight - c. 1920
Voight created Betty in 1919, making the strip an early example of representational cartooning.  In the panel above, Betty is drawn in near-illustration style, whereas Lester DePester is cartoony.

Bringing up Father by George McManus - 25 September 1938 (or possibly 1932)
Begun in 1913, Bringing up Father is another example where a woman (Jigg's daughter Nora) is realistic while the other characters are drawn in cartoon style.  Interesting that in those days it was women -- not men -- who were shown more naturalistically.  Though this is from the 1930s, McManus' style differed little from the 1920s. 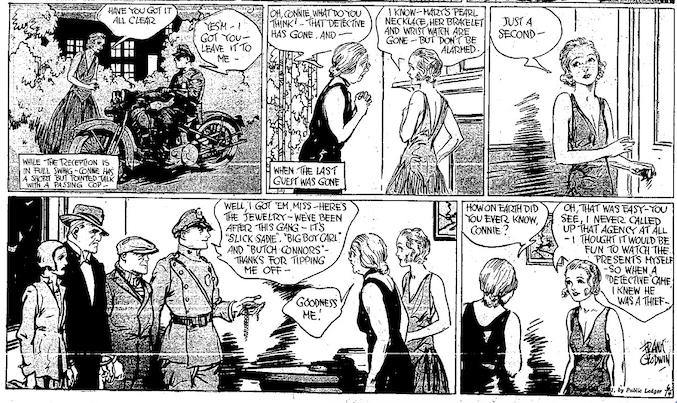 Connie by Frank Godwin - 14 June 1931
Wikipedia's entry says that Connie originated in 1927 -- or perhaps 1929.  The not-shown upper part of this Sunday strip has Connie only in profile, but this segment has a variety of views of her.  Unlike the early Betty and Bringing up Father, other characters are drawn more realistically than cartoony.  Godwin was a skilled illustrator, so I'm surprised that the other characters feature anatomical flaws. 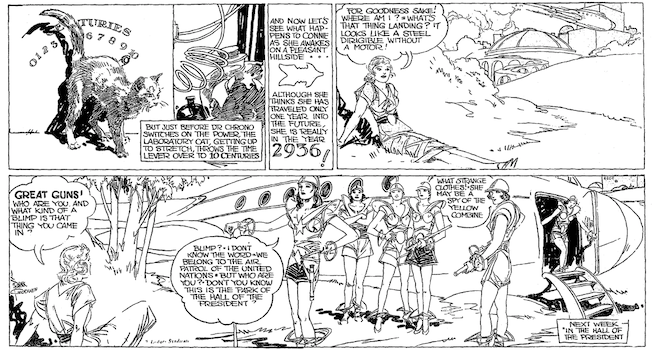 Connie - 1936
During the mid-1930s Connie became a science fiction strip for a while.  Note the improvement in Godwin's drawing.

Tarzan by Hal Foster - 1929
The Tarzan comic strip dated from 1929, and above is the ninth panel.  Foster's style evolved rapidly, but it's clear that from the first, depictions were illustrations and not cartoons.

Flash Gordon by Alex Raymond - from first page, 7 January 1934
From its launch in 1934 Flash Gordon was an illustration-style Sunday comic.

What I find mildly interesting is that the shift to realism (now long gone from American comic strips) happened around the year 1930.  Some folks might relate that to the late 1929 onset of the Great Depression.  But it might have been something else.  But the appearance of such strips as Alex Raymond's  "Flash Gordon", Noel Sickles' version of Scorchy Smith, and Milton Caniff's "Terry and The Pirates" -- all started in 1934 -- might better be linked to the comparative seriousness and need for escapism of those times.
Posted by Donald Pittenger at 1:00 AM