The French are known for elegant design as well as a self-proclaimed devotion to la logique. For some reason, French battleships (cuirassés) designed before the Great War had looks that ranged from awkward to ugly. Perhaps logique triumphed over elegance. When battleship programs renewed in the 1930s all this changed and the new French battleships were among the most attractive in the world.

In fairness, nearly all the world's battleships designed before 1905 were awkward-looking. In part this was because they tended to sport several sets of different-sized guns. Starting with Dreadnought (launched 1906), battleships had a set of main guns and another of smaller guns for fighting off torpedo boats. In World War 2, secondary armament was devoted to anti-aircraft guns what cluttered much of the ships' superstructures. Nevertheless, appearance usually remained much less awkward than for pre-Dreadnought ships.

Below are two examples of French battleship architecture, one from each design era. 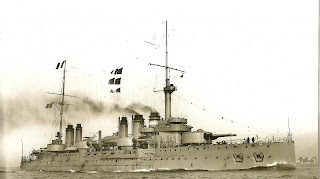 Voltaire - (Danton class) - 1911-1937
Voltaire was part of the 1906 battleship program whose initiation happened to coincide with the launching of Britain's Dreadnought, the first modern battleship. (The French Wikipedia entry on the Danton class is here.) French naval shipbuilding was a slow process, perhaps because the army was considered more vital. In any case Voltaire, which entered service in 1911, was what now is termed a "pre-Dreadnought" design that was instantly made obsolete at Dreadnought's 1906 launching. 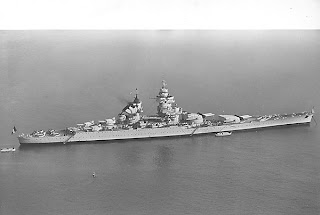 Richelieu - 1940-1967
Richelieu (Wikipedia entry here) was still fitting out at Brest when France was about to surrender. However, it escaped and served with the Allies during World War 2. Its main armament is of interest because the eight guns are mounted in two forward turrets. Typical main armament at the time was nine guns, three to the turret, with two turrets mounted forward and one to the rear.

Posted by Donald Pittenger at 5:33 AM