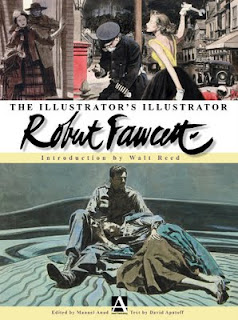 Robert Fawcett (1903-1967) was a highly respected illustrator who, perhaps due to his color-blindness, usually worked in black inks and compatible media. His major strengths were draftsmanship and composition supported by skill in doing the research needed to get details right.

Illustration-buff blog readers are probably already aware that a major
biography of Fawcett rolled off the presses not long ago (see cover image above). Although late to the scene owing to the fact that I got my copy only a week or so ago, this post is my brief review. (Fawcett has been getting a nice share of attention recently in addition to the book. For example, there was an exhibit of his work last year; Charley Parker mentions it here and includes some biographical information.)

Most of the biography is actually a substantial collection of Fawcett's work. There is a text supplied by the popular illustration blogger David Apatoff who mentions the book in this post.

Since Apatoff does very good work, I was pleased with what I read, but wanted more, more! I'm usually interested in human and situational factors in art almost as much as the art itself, provided such information is available. The comparatively limited amount of verbiage might have been due to (1) the publisher's desire to maximize the pictorial content within the book's page budget -- a reasonable choice -- or (2) David simply wasn't able to locate much information about Fawcett -- a real possibility given that the man died nearly 45 years ago.

As for Fawcett himself, he claimed to have studied neither anatomy nor perspective. Rather, he said that he learned to observe very carefully, and the ability to draw what he saw was sufficient for operating on the level he did. I wonder. Whereas I'm pretty sure that he couldn't name many bones and muscles, I doubt that he was naive regarding artistically important things going on "under the skin" so to speak. Moreover, I find it hard to believe that he didn't understand perspective up to and including the three-point variety. Perhaps he couldn't work out the details mechanically as an architect might, but he knew how to closely "fake" it.

Skilled as he was, Fawcett sometimes rushed his jobs. Here and there in the book I found featured male figures (usually clad in suits) that appeared stiff and simplified. The illustration below tends in that direction, but isn't as extreme as a few cases in the book. 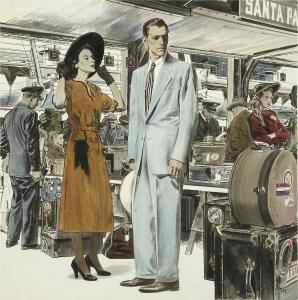 Magazine illustration - 1958
This is not to criticize Fawcett; many of his illustrations were prodigiously detailed and superbly executed. Still, he was a busy man in the 1940s and 50s and needed to keep bread on his table, so occasionally he seems to have rushed things. It's these odd details of his thinking and work that make the book so interesting.

Posted by Donald Pittenger at 3:20 AM

Thanks for your very kind review, Don, as well as your perceptive comments about Fawcett's work. I appreciate them both.

You must be the only person on the planet who, looking at a book of Fawcett's pictures, says "I'd like more words."

David -- You're quite welcome. As for being "the only person on the planet who..." Well, the title of this blog does include the word "Contrarian." :)