With this post I started an occasional series dealing with illustrators who preserved their careers by adjusting their style to suit changing illustration style fashions.

Now I consider Dean Cornwell (1892-1960), who is usually ranked among the top illustrators of the first half of the 20th century.

Cornwell reached prominence around 1920 and was hugely successful working in oil using a "painterly" style where brushstrokes are strong and visible. This style gradually fell out of favor during the 1930s when flashy watercolor work became the rage. In turn, this fashion was replaced in the wartime 1940s by sober oil paintings that had a more "finished" appearance where painterly qualities were subordinated.

It was in the 30s that Cornwell decided it was time to "play Shakespeare" (my term for wanting to become accepted as a legit fine artist) and began painting murals -- a quest that didn't net him much or any profit. He continued illustration to make ends meet, so adapted to the non-painterly approach of the 40s. As far as I know, he didn't buy into the 1950s "big head"/gouache style.

I'll be writing more about Cornwell later. If you want considerably more information right away, I suggest you get a copy of Illustration Magazine's issue number 23 that features Cornwell.

Here is an example of his work from the 20s and one from the 40s. 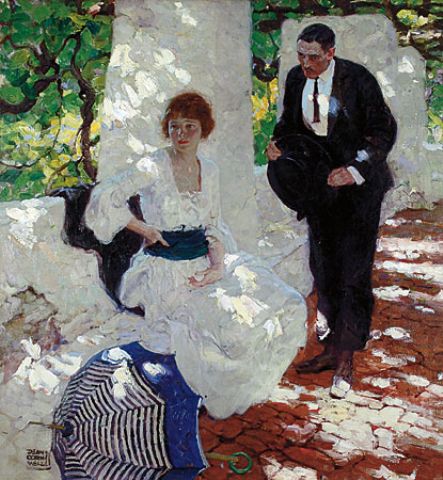 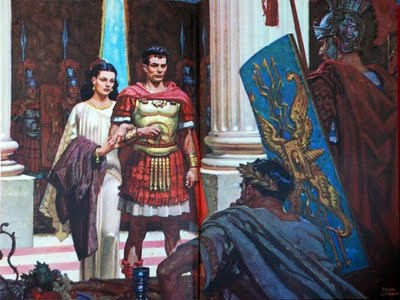 From "The Robe" - 1947.
I fully understand that you gotta do what you gotta do, and there was no way Cornwell could have survived had he continued the style of the top picture. That said, I really like his 1920s work and find later illustrations such as the lower picture undistinguished, generic work almost any competent illustrator of the time might have produced.