Gil Spear and the 1942 Chrysler


The son of parents who worked as illustrators, Gil Spear, Jr. made a career as a car stylist; a summary of his career can be found here.

Whenever I think of Spear what comes to mind are a few renderings he made of what many people around 1940 considered to be the shape of cars of the (possibly near) future. Spear was working for Chrysler at the time, and the above link mentions that he might have had a hand in designing the grille for Chrysler's 1942 models.

Obviously, one doesn't see a lot of 70 year-old cars on the road, but 1942 American cars are an especially rare breed from the circa-1940 era. That's because the 7 December 1941 attack on Pearl Harbor and the county's entry into World War 2 resulted in an order from the government that production of civilian automobiles be curtailed and then should cease by 22 February 1942. Chrysler brand sales for 1941 models were 161,703, but only 36,586 1942 model cars were produced and sold, most of these in the first months after their Fall 1941 introduction.

Below are examples of 1942 Chryslers, the first from an advertisement or a sales brochure, the others are restored vehicles. 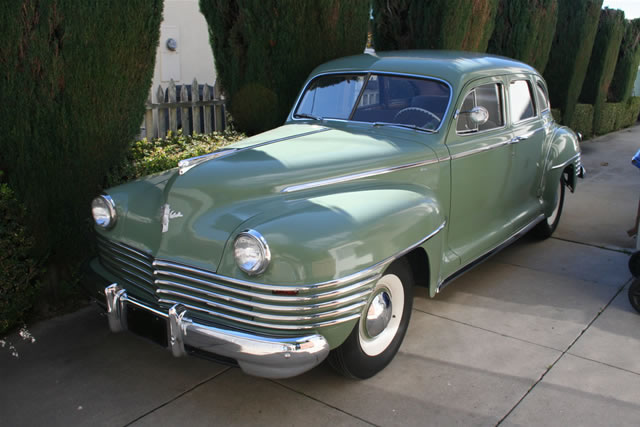 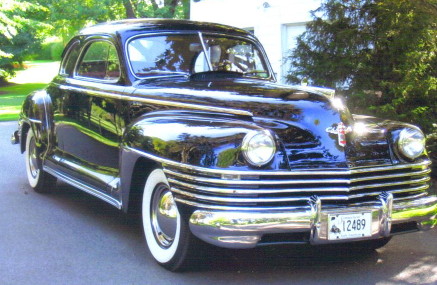 So where does Spear come into play? Below is an image I grabbed from the link above that pairs a Spear concept rendering with a photo of the front end of a '42 Chrysler (click on the image to enlarge).

Indeed, the front of the concept car looks pretty similar to that of the production job aside from its hooded headlights and its prow that juts ahead on the main frontal plane. But this rendering was in no way a prediction of the 1942 theme because it is dated September 22, 1941 -- near the time when 1942 Chryslers were appearing in dealers' showrooms.

What I find most interesting are other features of the concept. It has a double-wrapped (horizontally and vertically) windshield not greatly different from windshields on some Chrysler models of the late 1950s. The roof over the passenger compartment seems to be transparent, a not-so-practical styling obsession that has persisted until present times on concept cars built for automobile shows.

But note the general shape that is also shown at a different angle in the car in the background. What we see is a "aerodynamically streamlined teardrop" shape beloved by car-of-the-future forecasters of the 1930s done up in a nicely stylish manner. It's not a pure teardrop because the motor is at the front, so a hood is required as is that windshield. Otherwise it fills the streamline styling bill of those days right down to the parallel chrome strips and the lack of open wheel wells. Note how the trunk lid is a double-opening type. Of course, a functioning version of the concept drawing would probably be more ungainly looking if it were to function at all; as pictured by Spear, the front wheels have no room to turn for steering and this would have to be fixed. Also, the design seems to allow for only one seat; the top slopes too radically for a rear seat. And what about a back window for rearward vision?: I see none.

By the way, those fighter planes look pretty nifty too. Too bad they're nose-heavy (the wings are mounted too far aft) and that the wing area is too small. But this is concept art after all, so why not let a stylist have even more fun than the cars offer? 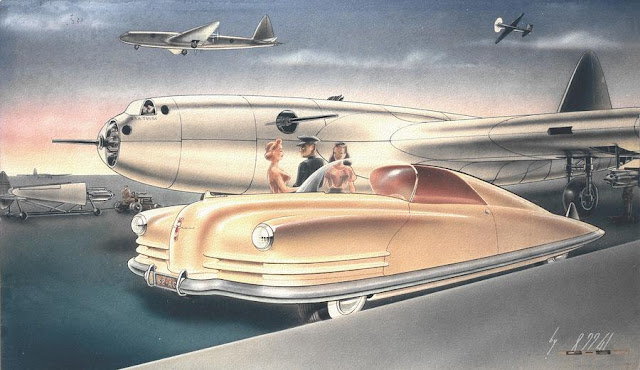 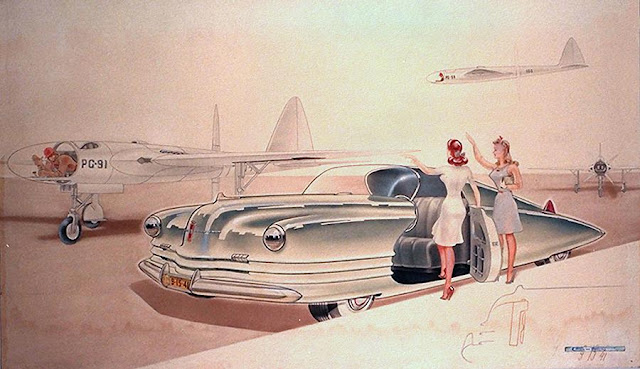 Here are two more Spear concept renderings from the same period (once again, click to enlarge the images). These designs are variations of the one shown earlier. The cars have the same basic shape and clearly have no rear seat, though headlights are exposed rather than lurking behind doors and there is no top over the passenger compartment for either car. The car in the lower image seems to sport a small tail fin, a style item that would become the rage in the later 1950s, especially for Chrysler Corporation's brands. The diagram below the ladies indicates the position of grille openings and the radiator, so it seems that Spear was paying some attention to practical matters and not going totally blue-sky.

Once again, the aircraft designs are stylish and interesting. The upper image shows four-motor bombers with pusher, rather than tractor, propellers. This arrangement appeared in a number of actual aircraft design studies in those days, but the only American production bomber with pusher props was the B-36 which appeared following the war and served well into the 1950s. Spear's bomber has potent, though perhaps impractical, defensive armament; those guns appear to be something on the order of 37 mm or even larger.

The image immediately above features what appears to be a fighter and includes some interesting features. First, the pilot is in a prone position. This serves to reduce the cross-section of the aircraft and thus should lower drag and increase top speed. It also would lessen the likelihood of a pilot "blacking out" from blood loss to the brain during extreme maneuvering. This arrangement was tried out after the war, but proved impractical in a number of areas including rearward visibility, something important in combat situations. Spear places the propeller amidships in a rotating cylinder faired into the fuselage contour. I don't recall if this was ever actually tried, but defects include mechanical complexity and potentially reduced propeller surface for a given radius. But the propeller arc as shown in the airborne craft is so great that the propeller would scrape the ground on takeoff or landing rotation.

Nevertheless, a lot of fun for both Gil Spear at the time and for us 70 years later.

This was the real beginning of Chrysler's 'Forward Look'.
- ImperialCrown (Walt).