Some observers place the Golden Age of American Illustration from the last few years of the 19th century up through the first two decades of the 20th. Me? I'm more partial to the 1920s and 1930s, possibly because that era interests me greatly and also because color printing technology continued its advance, allowing artists' intentions to be better realized.

Regardless, the publishing industry was crawling with illustrators during the heady late 1920s because color photography technology hadn't reached the state where resulting images reproduced as well as illustrators' work did. As always, quality of those illustrations varied. This variation was due to the spectrum of talent and skill of the illustrators as well as to deadline pressures resulting in rushed work.

Below are two examples of flawed illustrations that appeared in advertisements by important automobile companies of the day. One set of flaws is minor, another flaw is more noticeable: were the advertising agency art directors asleep at the switch? 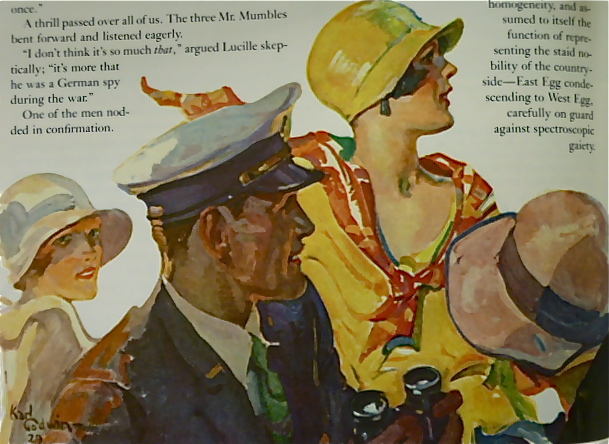 This image is not from the original Hudson Motors ad, but rather a photo I took of a page from a book that included the illustration. (I used a photo because my available scanners can leave funny striped patterns when dealing with some printed images. In any case, my intent is discuss details, not the piece of artwork in general.)

The advertisement was probably for Hudson or Essex cars and the artist was Karl Godwin (not to be confused with the contemporary and better-known Frank Godwin). I have found little concerning Karl Godwin on the Internet, and this short post by Leif Peng contains most of what seems to be out there.

The illustration appears to be done in transparent watercolor, a difficult, unforgiving medium. Godwin did a nice job from a technical standpoint with the exception of that ugly, too-dark shaded area at the base of the neck of the girl at the top.

But the real mistakes have to do with the cloche hats at the top and left. Note that, in each case, the front base of the hats' crowns do not align with the foreheads of the wearers; their foreheads are, in effect, chopped just above the hats' brims. Putting it another way, trace the lines of the foreheads up from the eyebrows and continue the curves are they should appear naturally: such extended lines will fall outside the sides of the hat crowns. 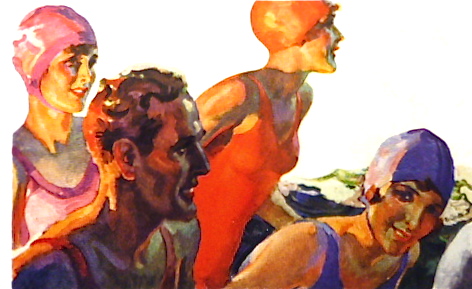 Here is another Karl Godwin illustration, this for the 1929 Hudson. The kinds of defects noted above are not found here. (Well, just maybe there's a similar problem with the bathing cap of the girl at the top, but there's not enough image available to be certain.)

I do like Godwin's use of color. Very 1920s. Rich, toned-down effects. The orange skins are set off by purple shadows in a manner picked up in the early 1930s by Walter Baumhofer on his cover illustrations for Doc Savage Magazine (scroll down the link for examples). 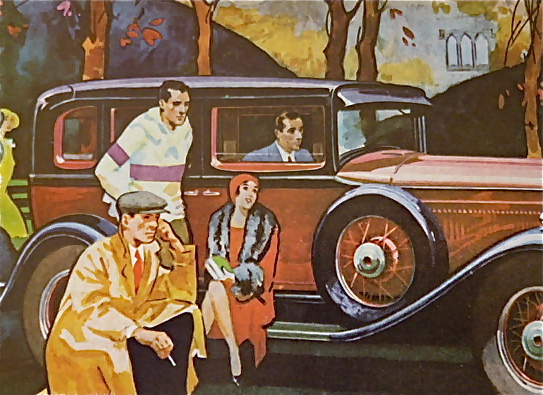 This is a detail from a late 1920s advertisement for Willys-Knight automobiles. I don't know the name of the artist.

By the 1930s and 40s, illustration art for automobile brochures and advertisements usually featured smaller-than-normal people who were often placed closer to car windows than they could possibly be in reality -- the idea was to make the cars appear larger than they actually were.

This Willys illustration has a college theme, and Joe College, Jim College and Jerry College are scaled about the right size for the car. The problem is with Betty Coed, perched on the running board. She is much too small compared to both the guys and the car. Plus, her pose looks awfully familiar, though I can't place the source. Why didn't the art director catch this sizing error? Lack of oversight? Or was the printer deadline too soon for changes to be made? We'll probably never know.

Posted by Donald Pittenger at 2:13 AM

(i) Why are the blokes so dark in the first two?
(ii) I gather that small actors and actresses are hired for furniture ads so that the furniture looks bigger than it really is. True?

dearieme -- What you see on your screen is at least three steps removed from the original artwork. But my take is that the guys' faces are in shade (note that their backs are sunlit, plus the shade lines along the shoulders).

I should have mentioned in the post that the scenes have pretty much the same grouping -- the main difference is in the outfits the people are wearing.