Although there might be some earlier instances, abstract painting entered the artistic scene with a rush shortly after 1910. This occurred in Europe, though American artists were part of the abstract pack, even proclaiming their own "ism."

The "ism" was Synchromism and the artists were Morgan Russell (1886-1953) and Stanton Macdonald-Wright (1890-1973) whose Wikipedia entry is here and other biographical information is here. In the present posting, I deal with Macdonald-Wright.

Synchromism itself is rather hard to pin down, as this Wikipedia entry suggests. Its theoretical basis seems to have music as its model and is an attempt to analogize its scales, harmonies and so forth with respect to colors in paintings. As a movement, Synchromism was pretty much over by 1920, though for a while it had influenced other artists including Thomas Hart Benton who is better known for his American Scene works. In any case, art history currently regards it as a minor movement: of the two books on my bookshelf listing art movements, one mentions Synchromism and the other does not.

Macdonald-Wright was interviewed for an oral history project when in his early 70s: the transcript is here. Below are some remarks taken from it. Besides Synchromism, he notes that Americans were considered barbarians in Europe and expresses the opinion that Picasso was not a good artist.

The link includes the following statement: "Quotes and excerpts must be cited as follows: Oral history interview with Stanton Macdonald-Wright, 1964 Apr. 13-Sept. 16, Archives of American Art, Smithsonian Institution." Tags are SM for Macdonald-Wright and BH for the interviewer, Betty Lochrie Hogue.

* * * * *
BH: I wanted to ask you more about Morgan Russell and the Synchromy movement. It has often been compared to Orphism. Would you care to comment on that?

SM: It has nothing to do with Orphism and anybody who has read the first catalogue of Synchromism of the Bernheim Jeune exhibition of 1913, or of the Nue [sic] Kunst Salon Exhibition in Munich of the same year would realize that we poked fun at Orphism and at Delaunay in spite of the fact the Delaunay was a good friend of mine. But the artists of that time did that. We had nothing whatever to do with it.... They linked us up with it for a very simple reason, which I think every American who has been to Europe and has spent any time thinking about what happened to him over there would recognize. And that is, that we were Americans and ipso facto if we were Americans we were barbarians. And ipso facto, if we were barbarians, we couldn't do anything original and naturally being in France where the gods of art had their being, we would have to be some way influenced by the French. So we were put in under that and in that catalogue we stated very specifically in the first lines of it that we called ourselves Synchromists in order that we not be dragged into a movement of which we had no possible relationship at all.

BH: About the only similarity was they were both moving toward abstraction?

SM: They were both color. Delaunay had a very delicate sense of color, a very charming sense of color. Delaunay was probably right in the French tradition of its most magnificent decorative quality, just as Braque was afterward. But I consider Delaunay, in spite of our arguments (and we've had even fisticuffs at different meetings with Delaunay; we liked each other very much) -- I considered Delaunay and Braque to be the two greatest men of that particular movement. I don't consider Picasso to be a great artist in any sense of the word.

[Morgan] Russell and I both studied with a man by the name of Tudor Harte in Paris. He was an Englishman, perfectly stark-raving mad, a man very much interested in color. The three of us (that is Tudor Harte, Russell and I) were experimenting in color which we worked on from (you might call it) a chrome psychological basis.... He [Russell] was a man who had a great --, what should I say? -- intuitive grasp of color possibilities. He himself painted, but he was probably the worst painter who ever lived. And he couldn't use his own theories at all, although they were, in the main, pretty solidly established. He worked it by relating the color spectrum of the 12 notes to the chromatic scale on the piano; and from that he would separate by interval -- the same interval would separate the piano that produces diatonic scale.

That's what Tudor Harte considered he was doing. Making a scientific variation on certain theories of Helmholtz's. Only he thought he went still further than Helmholtz by -- what shall I say -- making it available so people could make practical application of color from the standpoint of painting and harmony.

BH: This certainly was important to you and Russell in your painting because it was shortly after this that you propounded Synchromism, wasn't it?

* * * * *
Here are examples of Macdonald-Wright's work from various points in his career: 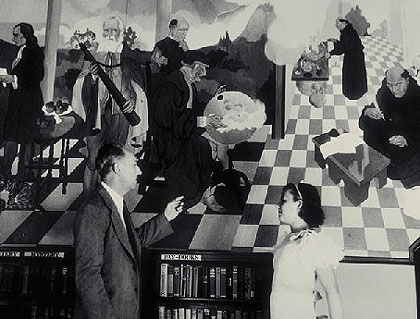 Wright at the unveiling of his Santa Monica, California library mural - August 25, 1935 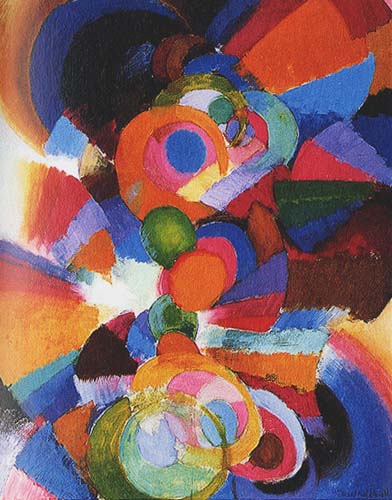 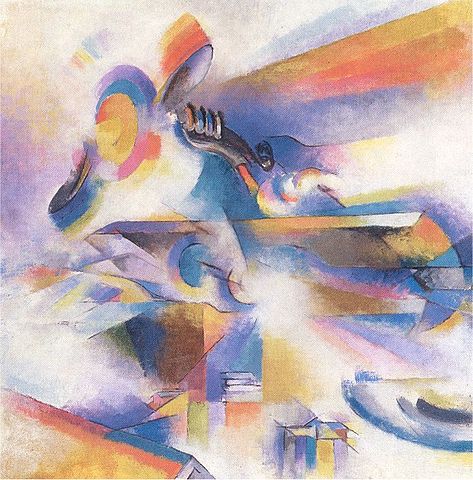 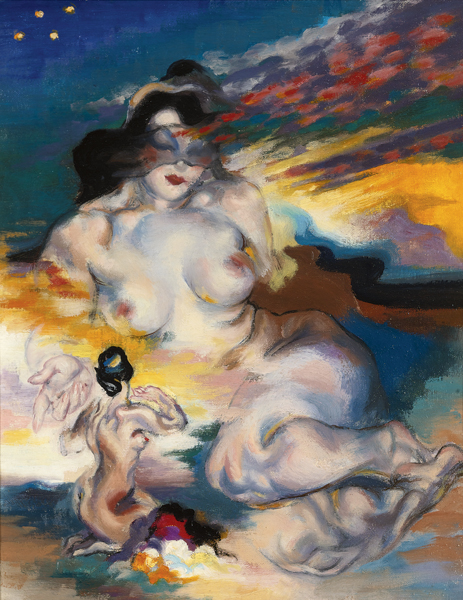 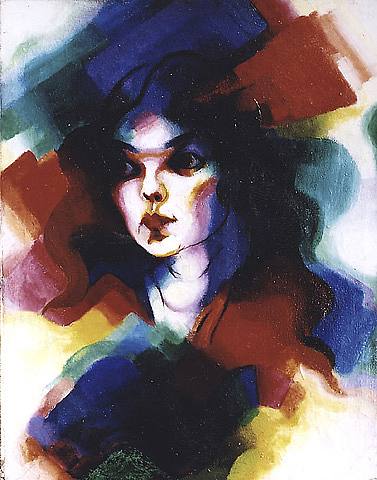 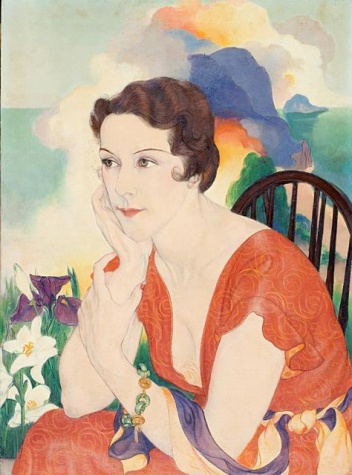 Portrait of Riza Royce - 1932
Note the whiff of Synchromism in the background. 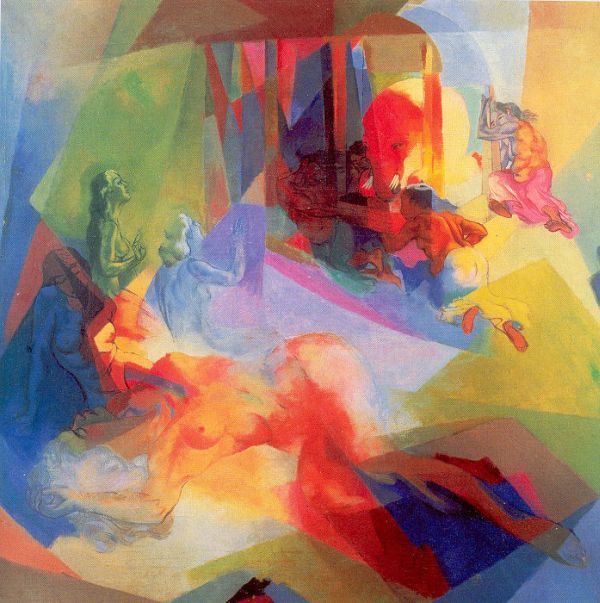 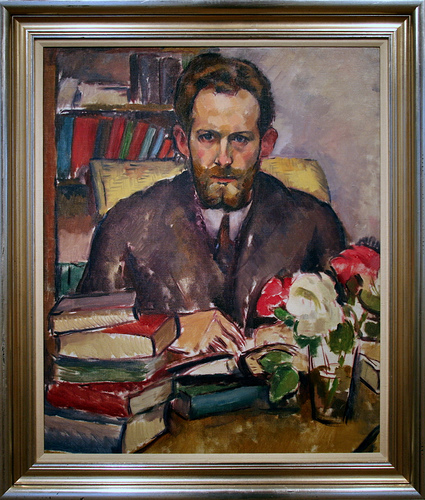 Portrait of Willard Huntington Wright - 1913-14
Wright's brother who is best known by his pen-name S.S. Van Dyne of the Philo Vance detective novel series. This painting was done while Macdonald-Wright was in the thick of his early Synchromism. 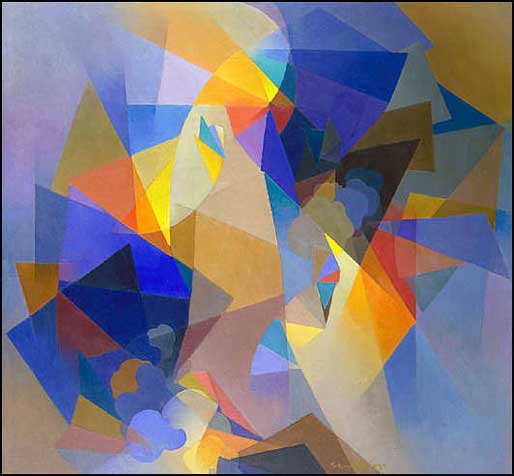 Raigo - 1955
A later abstract painting in the Synchromist spirit.

So far as I am concerned, abstract paintings are essentially decorative despite what the movement's apologists might claim. In that context, I find Macdonald-Wright's purely Synchromist works pleasing to look at, having nice, pretty colors. Things go downhill in paintings where he tries to graft Synchromism with Cubism ("Airplane") or representational elements. I think the Synchromism simply gets in the way, not enhancing the visual experience as its theory would have it.

Posted by Donald Pittenger at 2:13 AM

I really enjoy the colors' rhythm in the more abstract examples. Would you have any idea if there are reprinted productions of Macdonal-Wright or Morgan Russell's work? I've been searching but found nothing, which is unfortunate because I agree one or two would be great decoration.