An Airplane I Should Have Known About 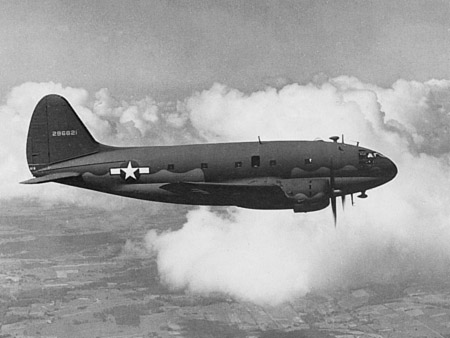 That's a C-46 Curtiss Commando transport pictured during its World War 2 heyday. (The nickname seems inappropriate, its closest relationship to real commandos lies in alliteration, though I suppose at one time or another some commandos or other special forces types might have parachuted from one.) A lengthy Wikipedia entry about it is here.

I have been aware of the Commando for almost as long as I've been aware of airplanes. Sometimes I must have seen one in the air, but the only real early memories I have were seeing some that were operated by non-scheduled passenger or cargo airlines sitting along the edge of Seattle's Boeing Field.

Commandos are probably best known for their role flying "The Hump" -- cargo plane routes from Allied bases in India over the Himalayas to bases in China when land-based supply to the Chinese sector was difficult or entirely cut off due to Japan's conquest of Burma. After the war, the Commando was mostly used as a cargo plane because scheduled airlines preferred the DC-3s they had been using pre-war and then purchased postwar airliners.

This future usage was unknown, of course, around 1937 when the Commando was first conceived as the CW-20 design. It was to be a large, twin-engine passenger transport with a figure-8 fuselage cross-section. The upper bulge was to be pressurized (a radical step, then) and the smaller, lower bulge left unpressurized for mail and other cargo. As it turned out, no pressurized version was ever built. As for "large," the Commando's wingspan was 108 feet (33 m), more than four feet wider than that of the brand-new Boeing YB-17, the Army Air Corps' newest four-engine bomber.

So what was it about the Commando that I was unaware of for all these years? It was that the prototype at first had twin tails instead of a single vertical stabilizer. It was only recently that I came across the images below via the Internet.

That's a wooden mockup of the CW-20 on display at the 1939 New York World's Fair. Note that only one of the twin tails exists; mockups didn't need to show every redundant feature.  The fighter in the foreground is a Brewster Buffalo whose markings indicate that it was about to be serving on the aircraft carrier Saratoga (CV-3).  (It's possible that this photo is from the 1940 version of the fair, because the Buffalo didn't enter service until late 1939.  But the Wikipedia link above states that the display was in 1939.) 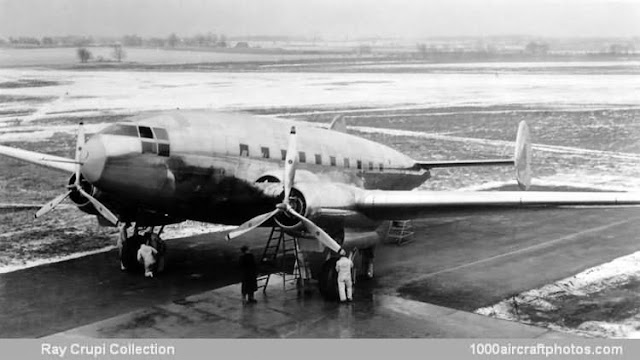 The prototype on the tarmac. A pitot tube is attached to the nose for flight test purposes.

And here's the twin-tail CW-20 prototype in flight.
Posted by Donald Pittenger at 1:00 AM

I never put the twin tail configuration together with this plane, either. Go figure.

Why do I want to say that WW II buffs remember the C-47 much more fondly? Perhaps its the contrarian in me. Wikipedia says the C-47 (one of these bravely stands next to the jump towers at Fort Benning) was more produced than the C-46 at >10,000 to 3,181, respectively.

Take care. One stellar thing about Seattle is that you can sometimes see these old birds flying over Puget Sound and the city.