Frank Frazetta (1928-2010) is famous amongst those who pay attention to science fiction and fantasy art, this largely having to do with book and magazine cover illustrations that he painted from the early1960s on.

There was more to Frazetta than those paintings. As his Wikipedia entry indicates, his early career centered around comics work. At first he was involved with comic books, then in 1953 (according to this source) he was hired by Al Capp to work on the Li'l Abner newspaper comic strip, one of the leading ones of its day. Frazetta did Li'l Abner strips from 1954 into 1961, when he resigned. It was at this point that he began his transition to painted illustration.

Comics art is normally based on black-and-white inked drawings. Shading, if required, was done via hatching or crosshatching, though some artists relied on Ben-Day, Zipatone and other quasi-mechanical aids. A colored cartoon usually had minimal shading on the original inked artwork, colors being applied as solid areas by the printer based on the artist's instructions.

In the early 1950s, Frazetta created a number of covers for the Famous Funnies publication that went defunct with issue No. 218, July 1955. Frazetta created covers dealing with Buck Rogers for issues 209-215, not long before publication ceased. Some sources above attest that these cover illustrations helped Frazetta to get hired by Capp. His version of Rogers and girlfriend Wilma Deering are his own interpretation, and not done in the styles of Dick Calkins or Rick Yager, who did most of the work on the strip in its glory days.

Below are Frazetta's covers in sequence. 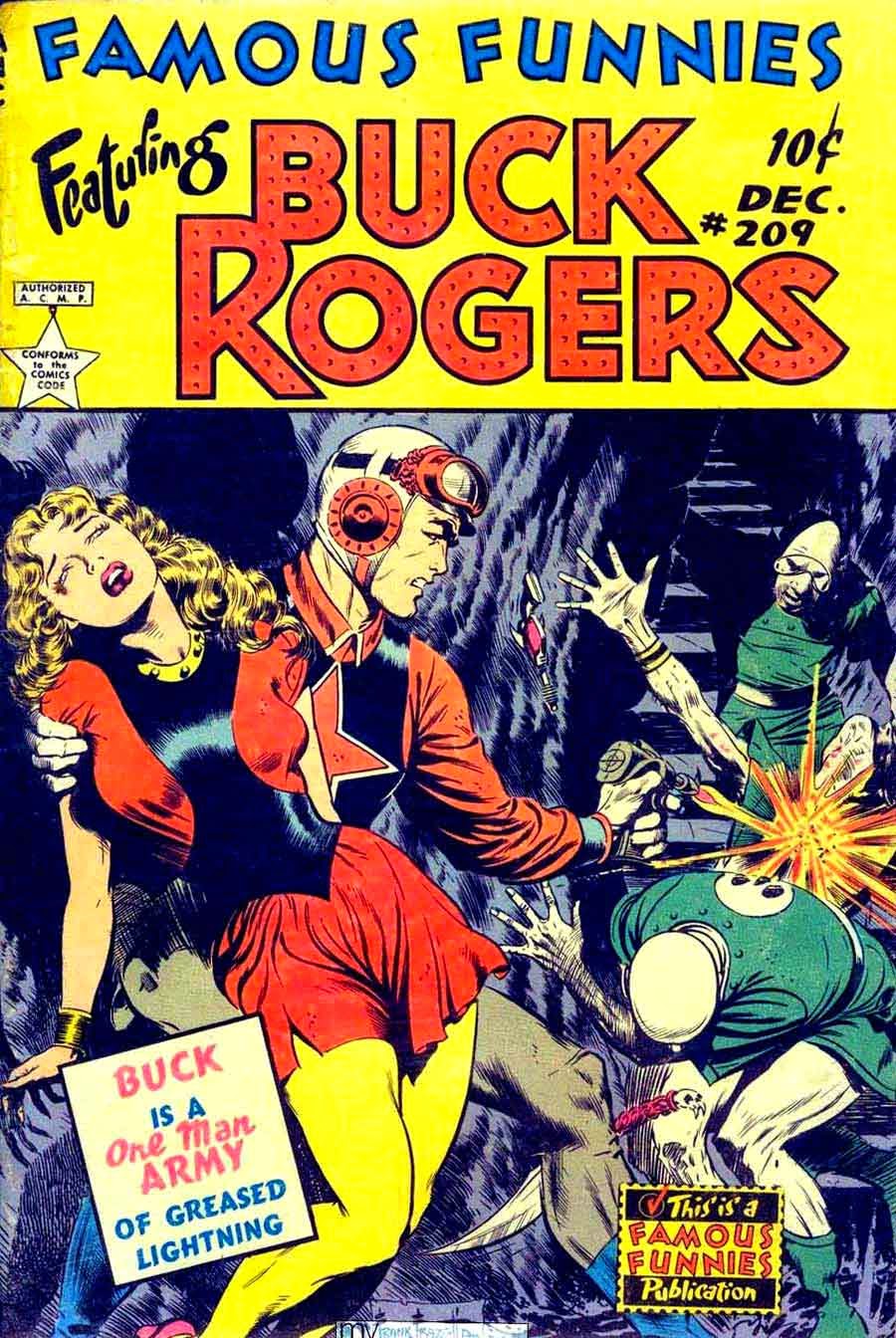 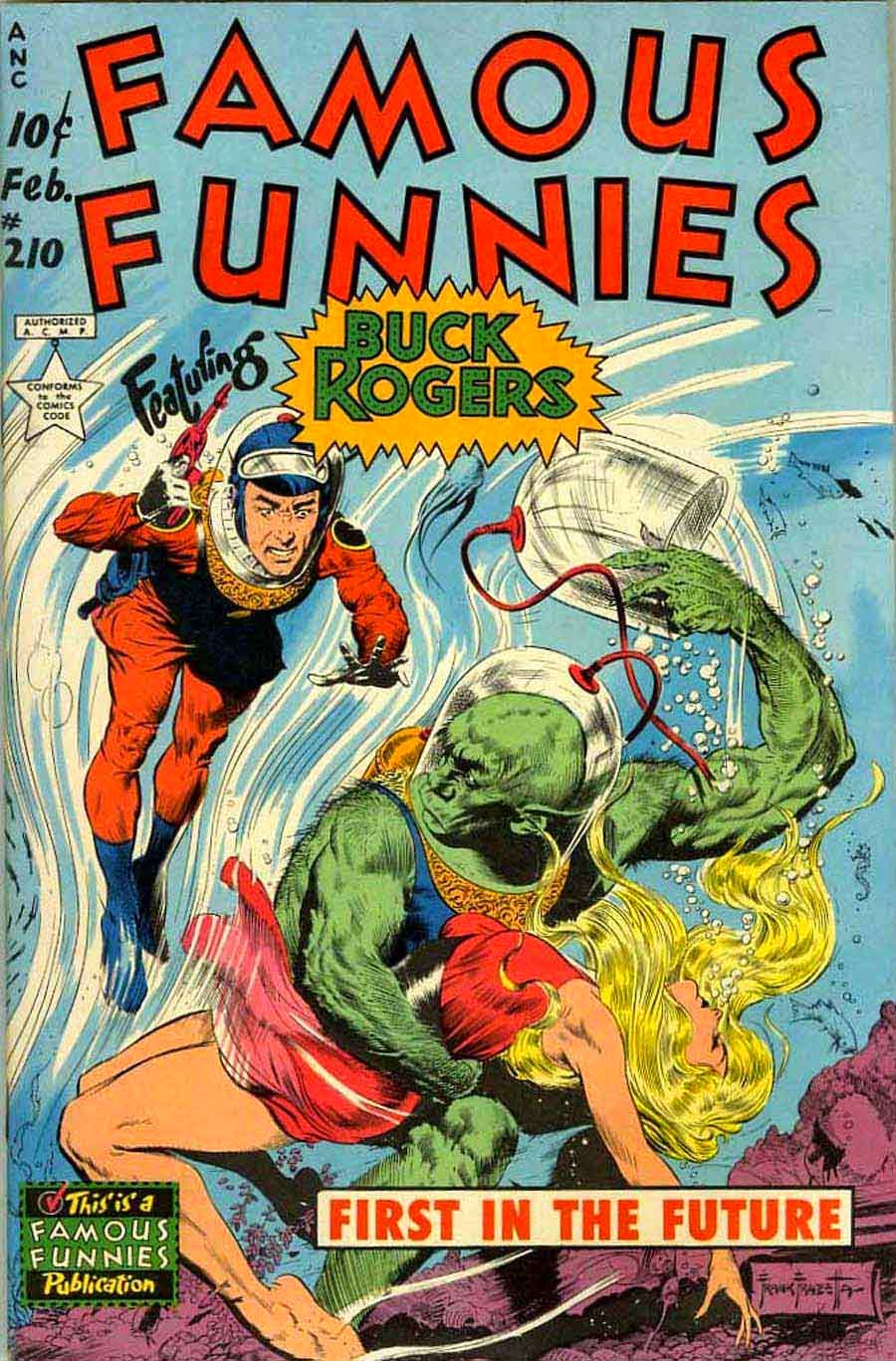 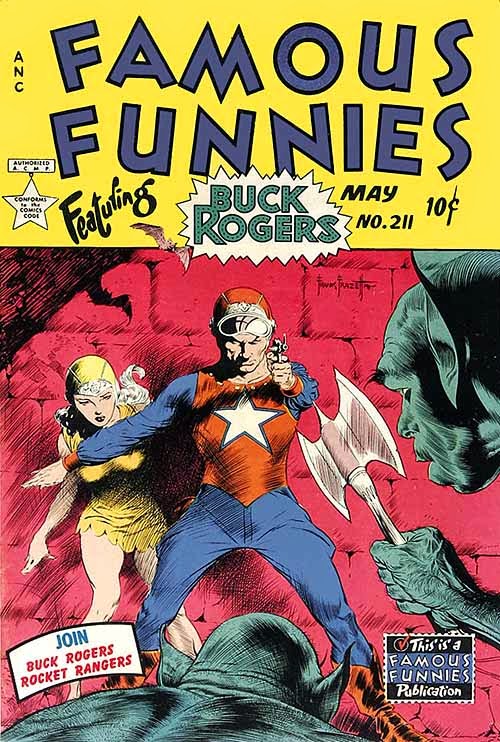 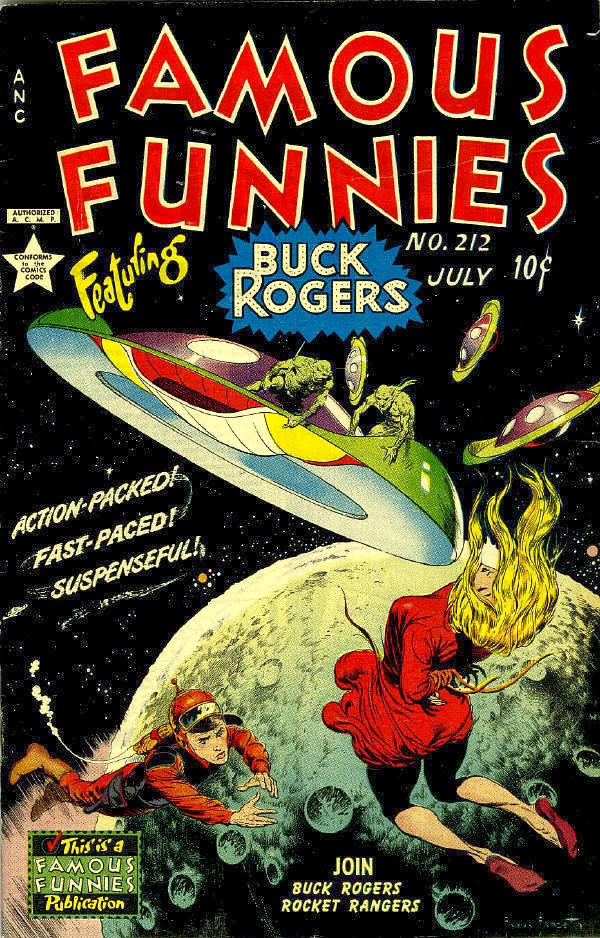 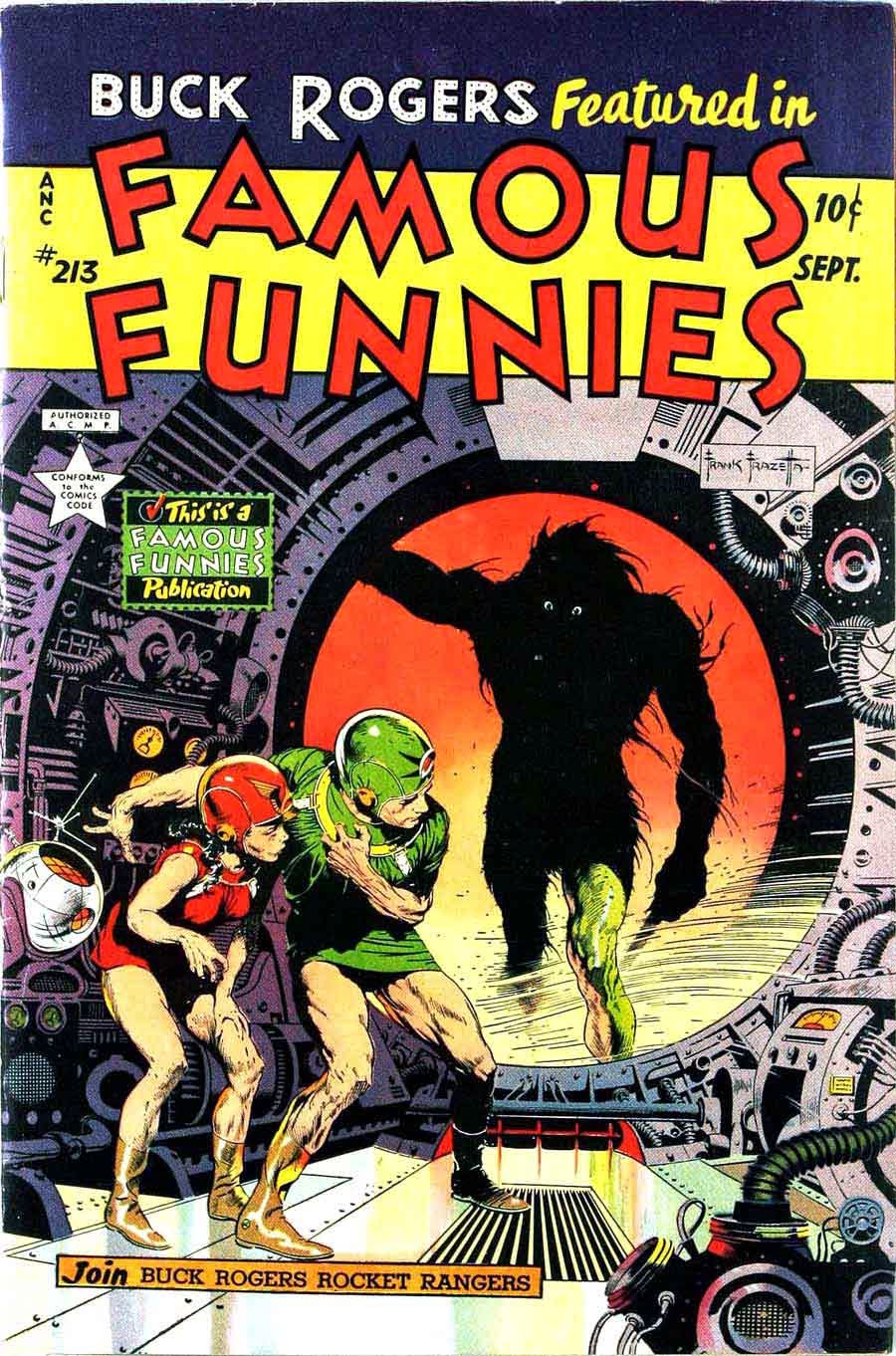 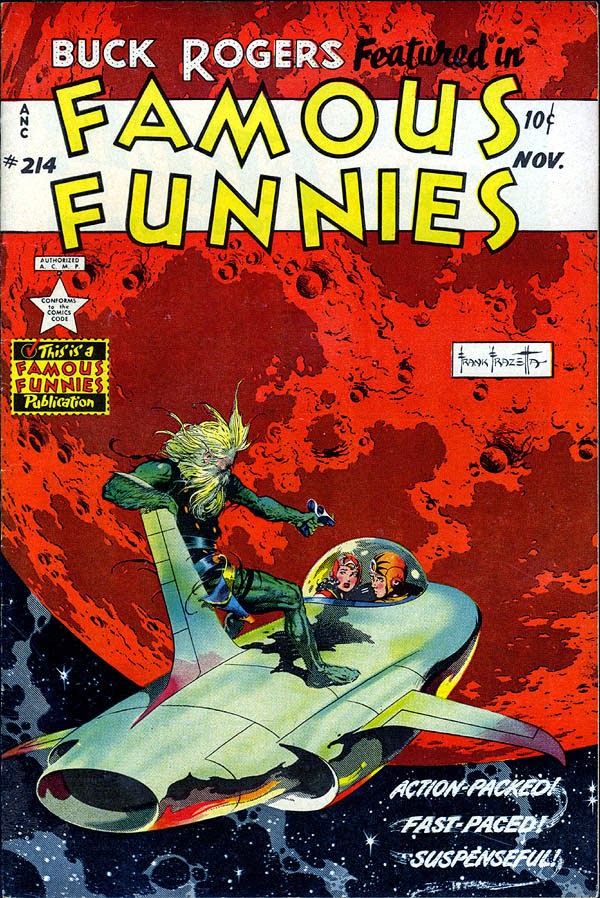 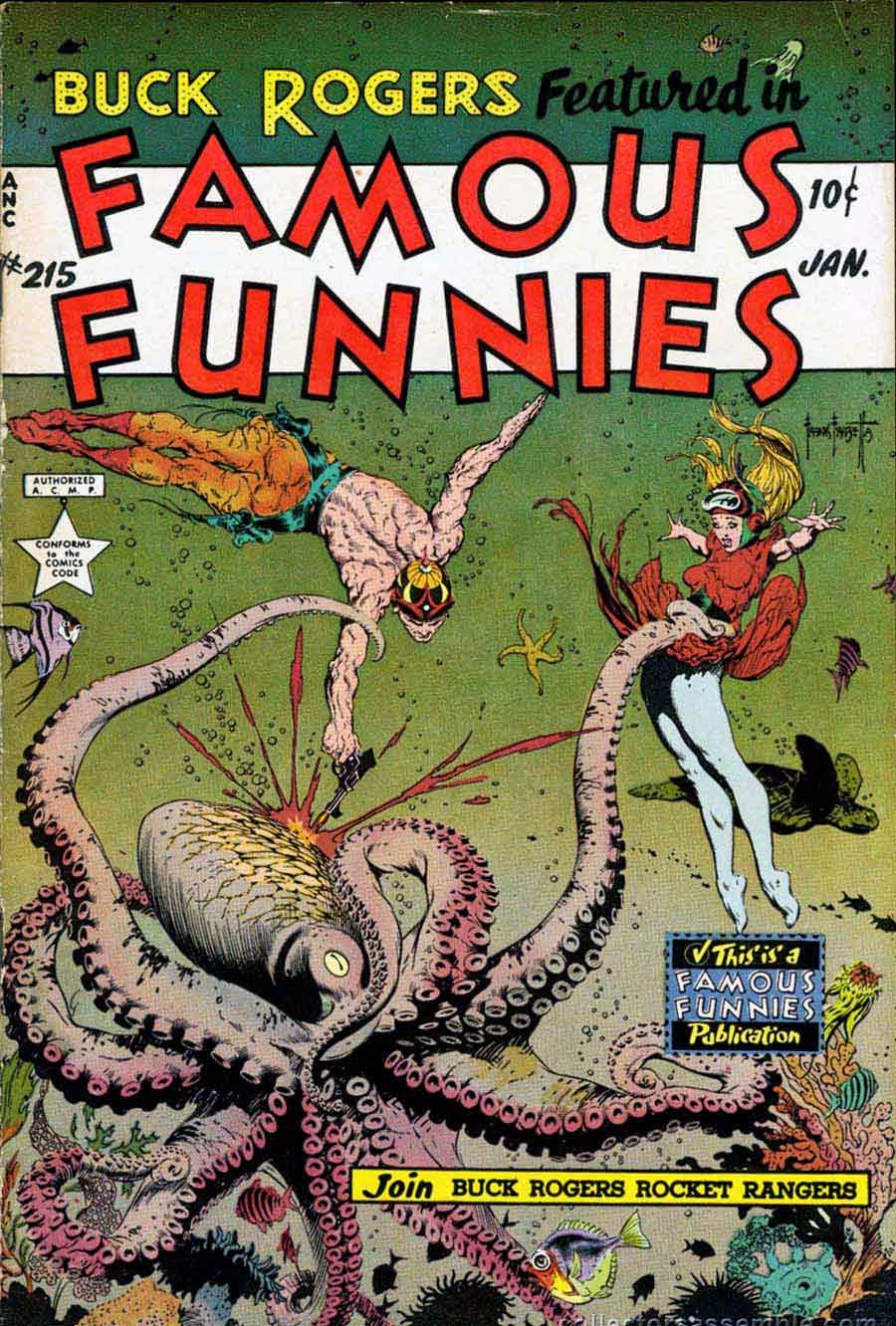 Sad to say, Frazetta's drawings here are not top-notch.  Numbers 210, 211 and 212 feature foreshortening that strikes me as off: heads are too large for Buck in 210 and 212, and for Wilma in 211. Wilma's muscles are too well-defined in 213; she should be more feminine (an error Frazetta seldom made in later years).  Wilma's legs are too large in 215.  The 209 drawing seems okay, as does that for 214 (though the couple are too squeezed together in the spaceship's cockpit, plus being too large to fit in the ship's structure as drawn. 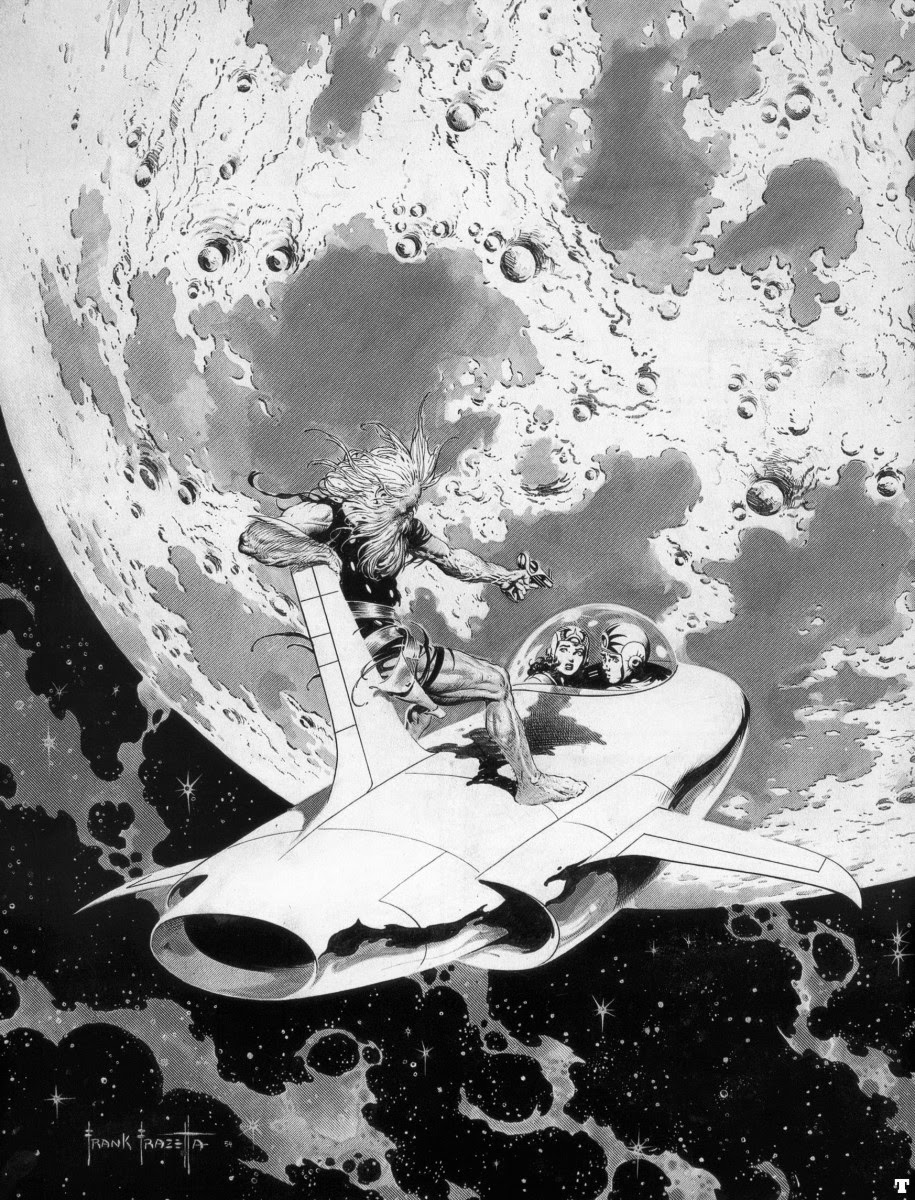 That said, the cover for No. 214 is my favorite, especially with the colors removed as in the image above. Click to enlarge.

You may be correct in each and every one of your critiques. Unfortunately, Frazetta is immune to criticism! Many people hold up Frazetta as some perfect artist, but they're wrong; he was a force of nature.

On the cover of No. 214, that spaceship cockpit does seem impossibly tiny and claustrophobic for two people, and how does the old man survive in outer space to threaten them with not even an oxygen helmet, much less a space-suit? Of course a helmet would spoil the visual effect of his long white hair and beard... And on No. 215, it's not so much that Wilma's legs are too big, it's that they're placed too far forward of her body and too low in relation to where they should connect to her hips. I guess once you start to over-analyze this stuff it just ruins things.