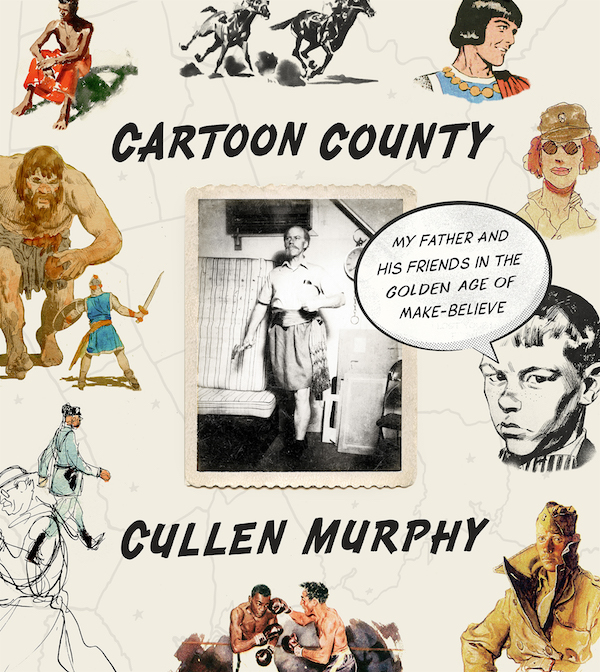 The book whose cover is shown above is about illustrator/cartoonist John Cullen Murphy (1919-2004) and fellow cartoonist friends living in or near Fairfield County Connecticut during the early 1950s and beyond. It was written by his son Cullen Murphy who for many years worked with his father on the Prince Valiant comic strip. Some links dealing with Murphy are here and here.

A few weeks ago the Wall Street Journal had a favorable review of the book. Having grown up during the final glory decades of continuity and adventure comic strips, I almost immediately ordered a copy from Amazon. When it arrived, I read the whole thing in a single five-hour shot.

I was aware of John Cullen Murphy, but never followed his Big Ben Bolt strip or Prince Valiant, created by Hal Foster who transitioned it to Murphy starting in 1971. The reason is that both strips were from Hearst's King Features distribution syndicate, whereas my parents subscribed to the Seattle Times, and not to the Seattle Post-Intelligencer, the local Hearst rag.

It turns out that John Cullen Murphy was an impressive man. He was good at portraiture even in his mid-20s, could have made a good career in commercial illustration had he not been diverted into the comic strip trade, and was knowledgeable and sophisticated even though his academic education ended with high school. As for the latter point, it's further proof that real education can happen once one has left school -- provided one has the will and wits to learn on one's own.

Murphy was raised in New Rochelle, New York, in the county immediately north of New York City. Nearby lived famous illustrators J.C. Leyendecker and Norman Rockwell. Rockwell even used teen-aged Murphy as the subject of a Saturday Evening Post cover (shown in the book). During World War 2 he was attached to Douglas MacArthur's staff and remained friends with Mrs. MacArthur (whose portrait he painted) for many years thereafter.

Besides Murphy family lore, the book provides many interesting details regarding well-known cartoonists who lived nearby. Also included are fascinating insights on the comic strip trade including Hal Foster's thoughts on treating continuity for strips appearing only on Sundays.
Posted by Donald Pittenger at 1:00 AM

Thanks, Donald. It sounds like Murphy had a more varied life than an everyday conventional cartoonist. Now I'm looking forward to reading this.