Julius Ussy Engelhard (1883-1964) was born in Sumatra, Dutch East Indies, and made his poster art career in Munich.  Some biographical information is here.

Engelhard was influenced by Munich's leading poster artist Ludwig Hohlwein (1874-1949), who I wrote about here.  That influence seems to have been greatest before 1920.  Thereafter, Engelhard's style became more versatile.

Examples of his work are below, with caption translations by me. 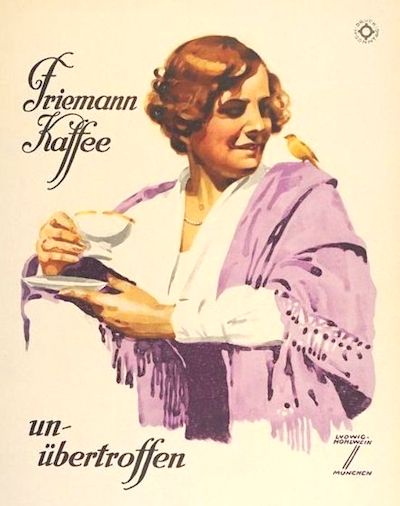 "Friemann Kaffee" - 1926 - by Ludwig Hohlwein
Compare to the next Engelhard posters below.

Münchener Flieger Tag - 1918 (Munich Aviation Day, 1918)
Near the end of the Great War.  The airplane looks like a Fokker Eindecker of 1915 vintage.

Hermitage event poster - 1920
The style is no longer strongly Hohlwein's.

Once again, I join others in thanking you for featuring the powerful graphics of German poster art. Our contemporary graphic artists have much to learn from this work.

I agree with you that Ludwig Hohlwein was the best poster illustrator ever. Julius Engelhard pays Hohlwein homage by being influenced by him to such an extent. I have always been impressed this style but also by the total design of these posters. Hohlwein is particularly especially good at integrating the illustration and typography into a single commanding unit. The Friemann Coffee poster is a good example.

Also, I was surprised to learn Hohlwein illustrated used watercolor. Transparent watercolor isn’t the easiest media to work with, especially when combining a number of large flat areas. This leads me to believe he was using a combination of transparent watercolor and gouache, a natural method of rendering posterized images.