Longer, lower, wider and, therefore larger and heavier, was the general trend for American automobiles during the 1950s and 60s. Yes, "compact" cars were introduced around 1960, but these too tended to grow over time. (This isn't a strictly American thing. Consider the Honda Civic, a very small car in its first version and now just a notch smaller than its "standard size" sibling, the Honda Accord.)

The present post deals with the "wider" aspect of that growth. Some designs simply had fenders bulge out. But for a while there was a fashion of having "catwalks" on either side of the passenger compartment -- flat extensions between the side windows and the drop-off zone of the fender/side of the car. This will be made clear in the illustrations below.

The visual result was often pleasant. Moreover, the wide sides in theory could have contained substantial steel beams for side-collision protection. But fuel crises starting in 1973 and later fuel mileage regulations forced automobile designers to reduce the size and weight of vehicles. An easy way to reduce weight is to narrow a car, and that practice pretty well ended the fashion of wide catwalks.

Here are examples of broad-shouldered cars from that era. 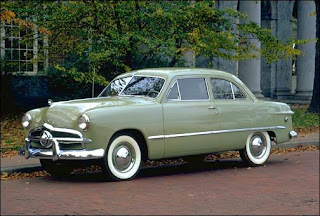 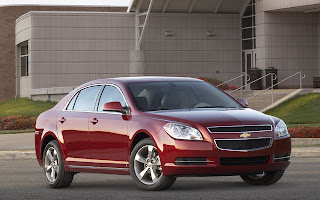 These first two photos offer a before-and-after perspective on standard size cars and their side treatments. At the top in a 1949 Ford, the car I consider the End of Evolution -- all styling since then being essentially relatively minor advances and variations. The lower photo is a of 2010 Chevrolet Malibu. Note that the sides on both cars don't project far from the windows. 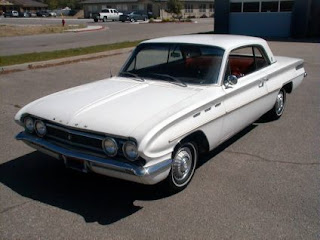 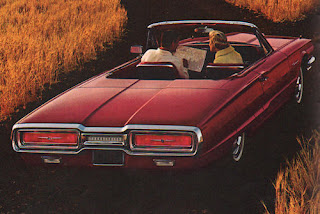 1964 Ford Thunderbird
This Thunderbird's shoulders are more rounded than catwalk-like, but the ridge near the top of the fender stiffens the appearance of that section of the car. 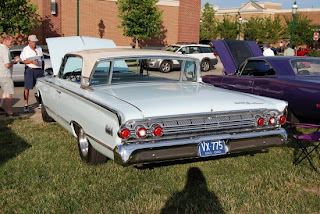 1963 Mercury Monterey
Here is a particularly strong example. We see both a catwalk and ridge setting off the tumblehome. 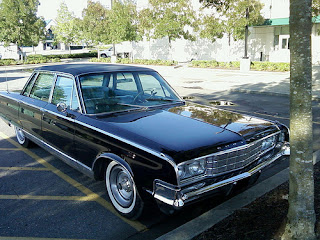 1965 Chrysler New Yorker
The same might be said of this Chrysler, though the catwalks seem a bit narrower than the Mercury's. 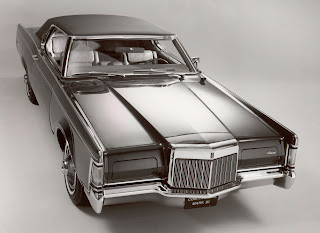 1968 Lincoln Continental Mark III
This Continental appeared towards the end of the catwalk era; again they are narrow.

Posted by Donald Pittenger at 4:19 AM