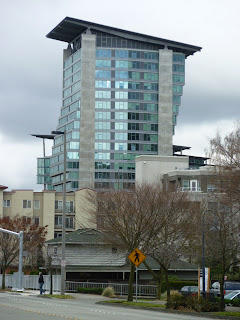 To my possibly warped mind, it isn't truly awful: most anything Frank Gehry touches fills that bill. No, it's just a pedestrian hash, a stew (to mix culinary metaphors) of recent highrise architectural clichés.

Note the silly slanted roof. A fairly recent federal courthouse tower in downtown Seattle has the same treatment. Maybe this sort of thing is justified by citing our rainy climate, admitting that flat roofs might not be all that practical. But whatever drainage system might be employed, it strikes a casual viewer that rainwater should pour off the lower edge onto a sidewalk or street below. Similar roofs are on lower parts of the building mostly hidden in this view.

Then there's the "slanted structure" cliche -- clearly here a combination of offset stacked floors on one side and mild cantilevering on the other. And to what purpose? Whatever happened to the modernist mantra of functionality and form following it? What I see is a cheap-looking display of an architect striving for notoriety by attempting the transgressive route. (Hey gang, this isn't strictly functional so I'm doing a brave thing even though I'm not too far off-reservation 'cuz of all that glass, steel and reinforced concrete I used!)

But the real blame falls on the architect's client. Were there no adults in the room when this joke of a project was approved?

Posted by Donald Pittenger at 9:35 AM

Was it built for a specific company, or is it rented to a variety of tenants?

Peter -- I didn't walk all the way over to it to get that information. (I was on my way elsewhere when I took the photo).

I'll probably get back to Bellevue in a couple of weeks (we're off to LA for part of next week) and will look into it. It might be or is near the CH2M Hill consultants building just west of the I-405 freeway.

Sorry that I didn't delve further before posting the article.

It's a "mixed use residential development ... in an arts filled setting."

Eh, it's not that bad despite that certain dis-used look it has. I notice the stability-reassuring roof columns to perhaps prevent certain types of people developing subliminal anxiety symptoms.

Any dwellers on the leeward side are apparently S.O.L. Conclusion: at least it isn't a white rectangle or telescoping white box.

Hi, I just found this post via another blog's referral. Great blog! :)
Interesting feedback about the building. I have an idea on how it could be useful - elsewhere perhaps - and thought you won't mind if I share it... I live in sunny Sydney (Australia), where many ground floor units get no sunshine at all. I (and may I stress that I'm not an architect!) always thought that if by any chance the building could be pushed a bit to either side (much like the example), and skylights could be installed, then the units at lower levels could enjoy bright living rooms... not that the building on the picture needed this function. :)

Reka-Zsusanna -- Hmm. Usually there is sunlight coming in side windows provided nothing (such as trees or another building) blocks it and the sun itself is not at a high angle such as near noontime in summer.

Your concept could offer skylighting and/or patios provided there was plenty of offset, something not necessarily practical in the design pictured -- if there were more than a few floors.

I have seen pictures of terraced buildings that would offer such high-angle sunshine. Such structures would be on a slope and/or with increasingly less floorspace the higher the terrace.

Thank you for your reply! :)
Well, you said it:
(1) "provided nothing (such as trees or another building) blocks it" that's exactly what the problem is.
(2) "less floorspace the higher the terrace" and that's probably exactly why it's not done in practice. Most people would probably opt for more sqm, then more sunshine... And developers want to maximise revenue.