In the Beginning: John Twachtman

Among my myriad character flaws is that I've never much liked hardcore Impressionism of the mature Monet variety. It surely has to do with the fact that such images are too vague for my taste. I really appreciate a hard edge here and there, and a value (light-dark) design is welcome indeed.

So it is that I've never been much of a fan of the American Impressionist John Twachtman (1853-1902) aside from his Arques-le-Battaille currently residing the Met in New York (also see image below). His Wikipedia entry is here, a website devoted to him here, and a chronological presentation of his paintings is here.

But then there is the early Twachtman, before the Impressionist bug bit him, and there is more to him than Arques-le-Battaille. Take the painting shown at the top of this post, for example. It was buried in the storage area of Seattle's Fry Art Museum and only recently reappeared in conjunction with the museum's reopening following reconfiguration of gallery layouts.

The painting is titled "Windmills, Dordrecht" and was created in 1881 or 1882 while Twachtman was vising Europe with his new bride. It might be a bit hard to tell from the small image, but the painting (which in fact isn't very large) was painted with crispness and economy. Very pleasing to me, at least. Makes me wonder how things would have turned out had he never taken up Impressionism.

Below are two paintings from the first part of his career and three from the later part when he regarded himself as an Impressonist. 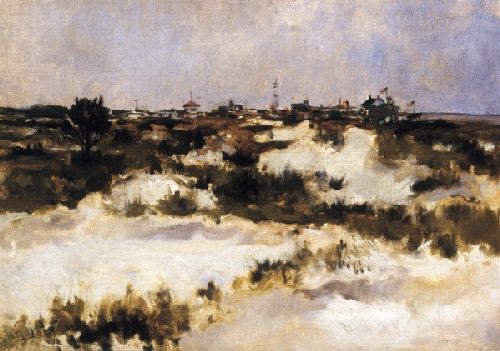 "Dunes Back of Coney Island" - c.1880
This painting was also on display at the Frye reopening. 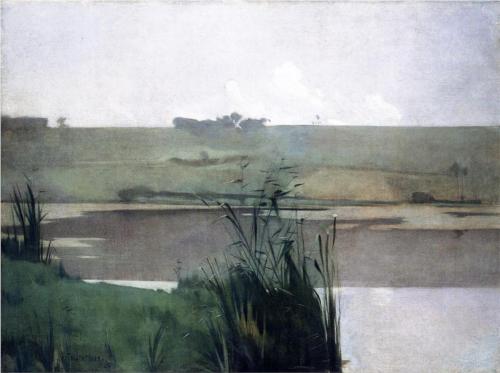 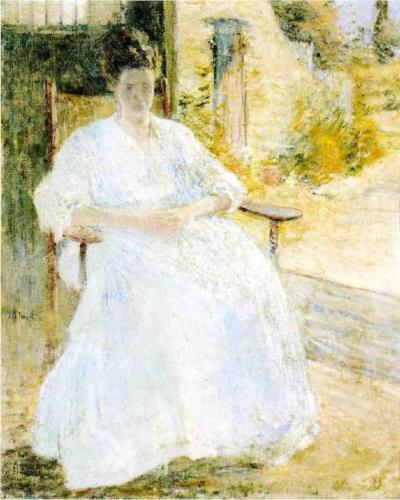 "Figure in a Landscape" - c.1895
He seldom painted people. This is an Impressionist portrait of sorts. 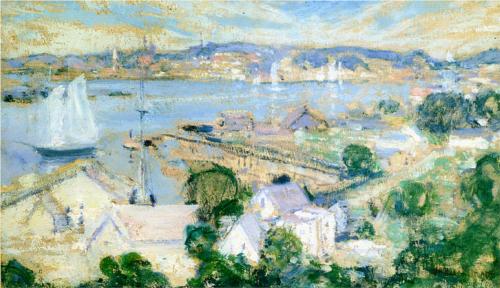 "Gloucester Harbor" - 1900
There are plenty of details in this scene, but they get smudged away thanks to the Impressionist style.

"Waterfront Scene, Gloucester" - c.1901
Structures with clean edges dominate this scene, so Twachtman was forced to tighten things up compared to what he might have done if he were painting a countryside scene.

Posted by Donald Pittenger at 1:56 AM

The windmill painting struck me as strikingly attractive when I opened your blog just now. The Dunes painting is also very good. I actually like the two of them rather better than the more muted and watercolour-ey Arques-le-Battaille, as I am a fan of that painterly look, and the strong contrasts create visual interest. But perhaps that painting is better in person.

The last three paintings are somewhat boring, not just because of the hazy impressionistic style, but also because they don't have a strong sense of massing and focus.