Towards the End: J.C. Leyendecker

Joseph Christian Leyendecker (1874-1951) was a leading American illustrator for much of his long career. He produced more than 300 covers for the Saturday Evening Post, America's leading general-interest magazine during the first half of the 20th century. He also was famed for his advertisement illustrations for Kuppenheimer, a man's clothing maker and for Arrow collars and shirts. More background on Leyendecker can be found here and here.

His distinctive style featured strong, crisp lines and form definition along with hatched and sometimes crosshatched color overlays. A sense of his stylistic evolution can be glimpsed via this chronological gallery of Post covers.

Illustration fashions change, so Leyendecker's highly distinctive style became increasingly passé as the 1930s rolled along. Apparently his personality was changing during this time, which might have been a further career hinderance. A major blow was changes in the Post's editorial staff during the years around 1940. New editors and art directors eventually cast Leyendecker aside. 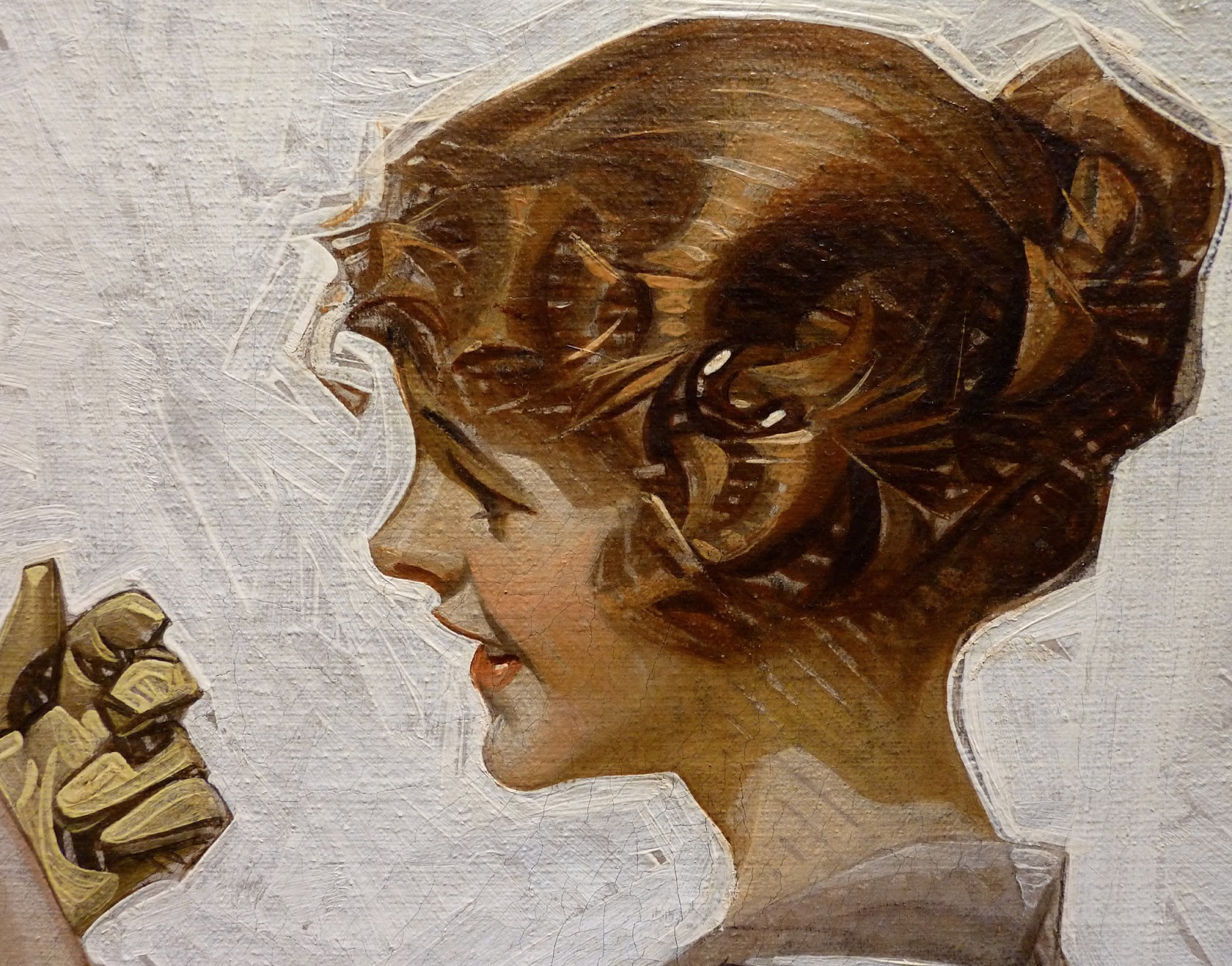 Detail from art in the Kelly Collection
I photographed this at an exhibit of Kelly items at Pepperdine University a few years ago. Note Leyendecker's distinctive brush style where there are regular brushstroke-related gaps between overpainting and an underlying color. Also, the background is created using a broad brush that blocks in the color while leaving visible strokes and gaps in coverage -- another of his stylistic characteristics. 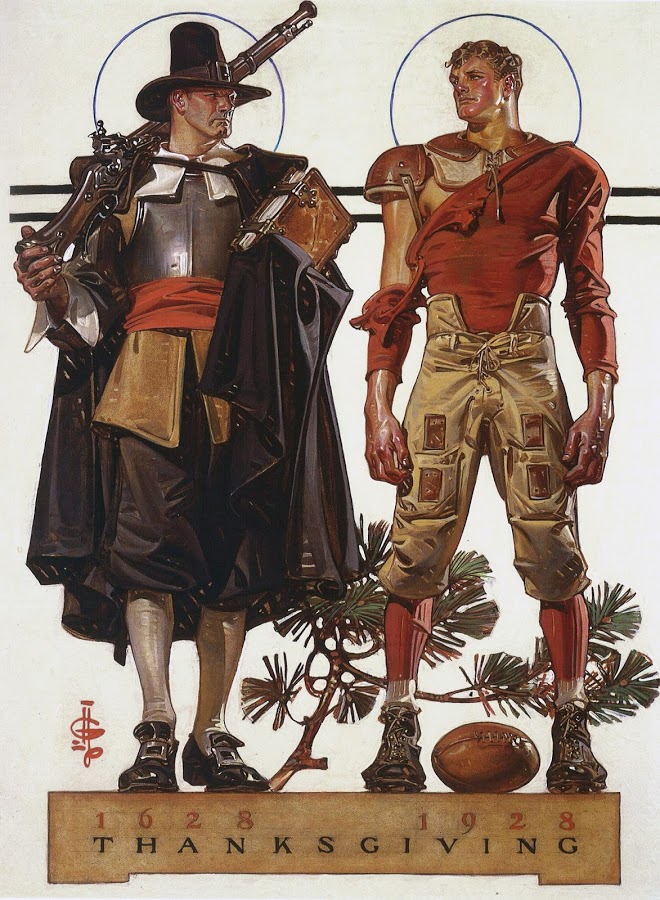 Saturday Evening Post cover art - 24 November 1928
Another example of his style during his time of peak fame. Contrasted are a Pilgrim Father from the 1600s with a 1928 college football player. 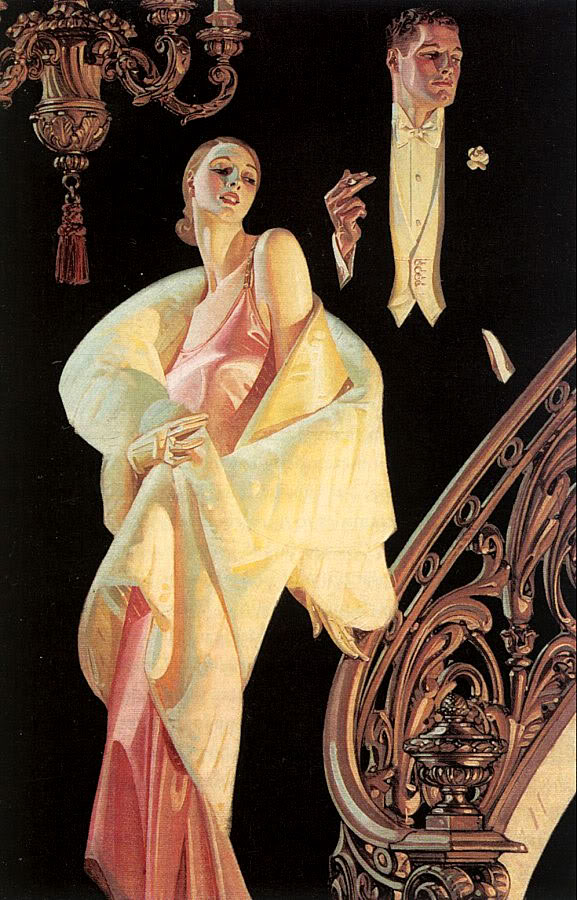 Illustration for Arrow collars - 1932
The models are Phyllis Frederic and actor Brian Donlevy. Here the brush hatching is less prevalent. Leyendecker would use it or downplay it according to his feeling for the subject matter. Apparently, he opted for sleekness in this illustration. 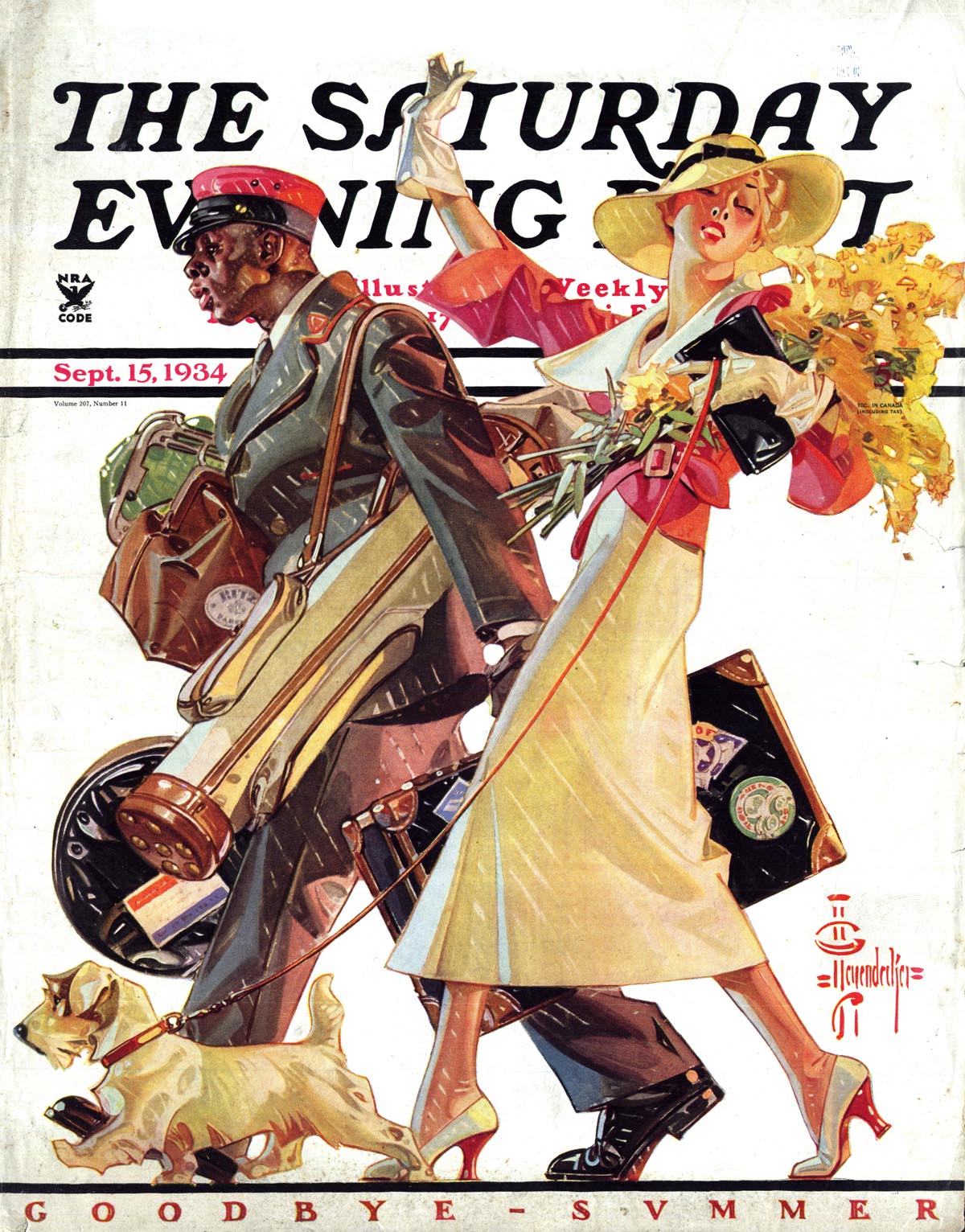 Saturday Evening Post cover - 15 September 1934
Hatching returns for this Post cover. For some younger or overseas readers I need to mention that the overburdened fellow is a railroad porter doing his duty for the fancy lady. 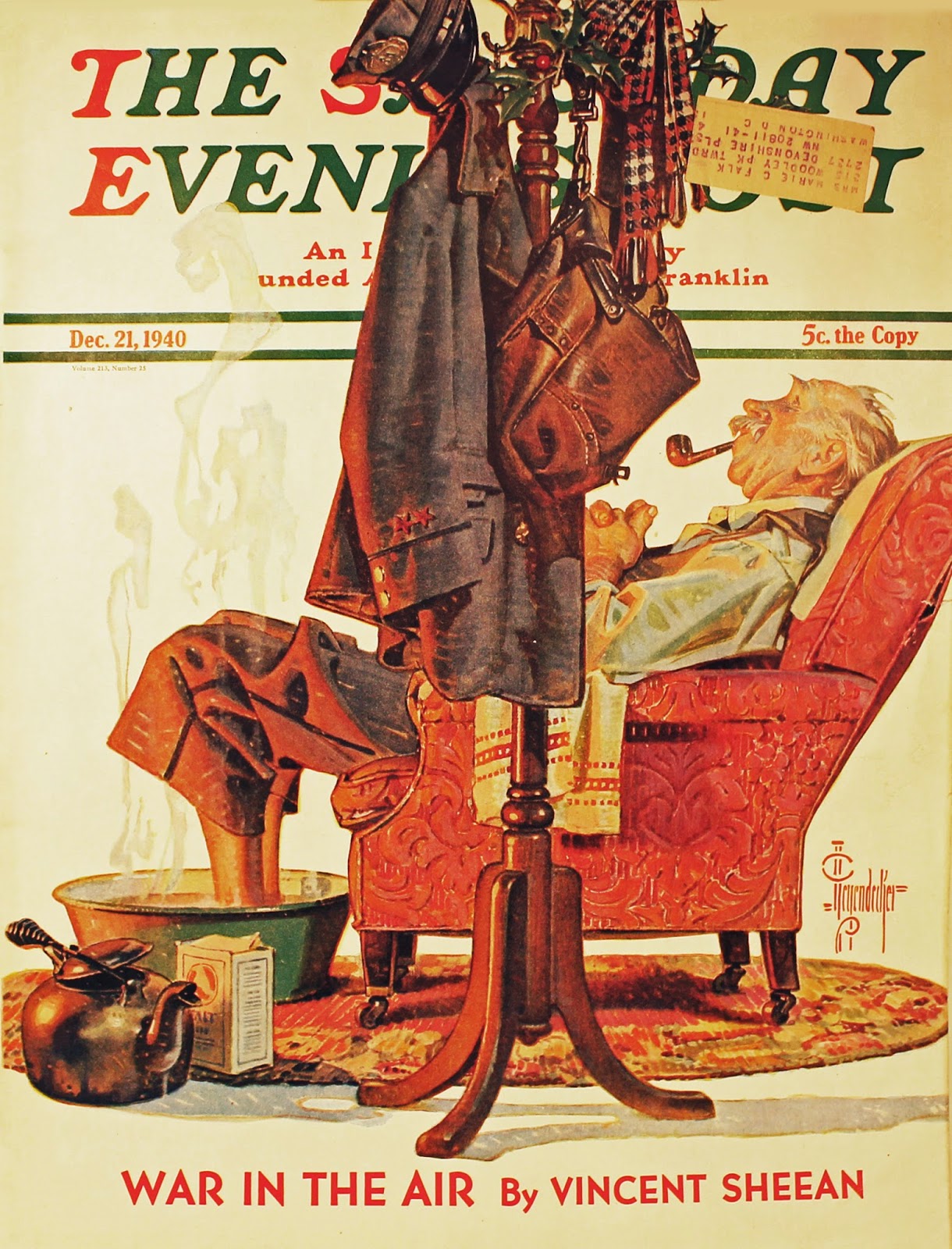 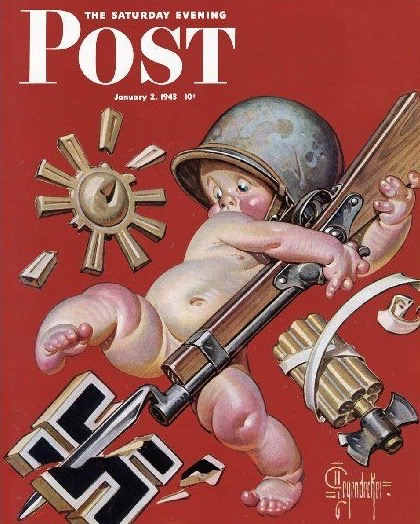 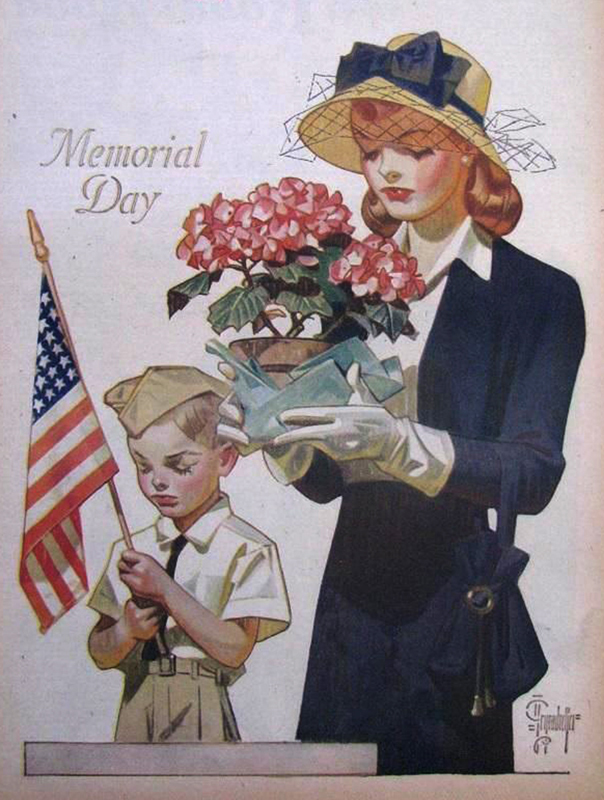 American Weekly cover art for 25 May 1947 issue
Crisp lines and fabric fold definition are still in the Leyendecker spirit. But I cannot be sure if the simplified style was an attempt to adjust to changing illustration fashion or else that he was simply dashing this work off to meet a deadline. 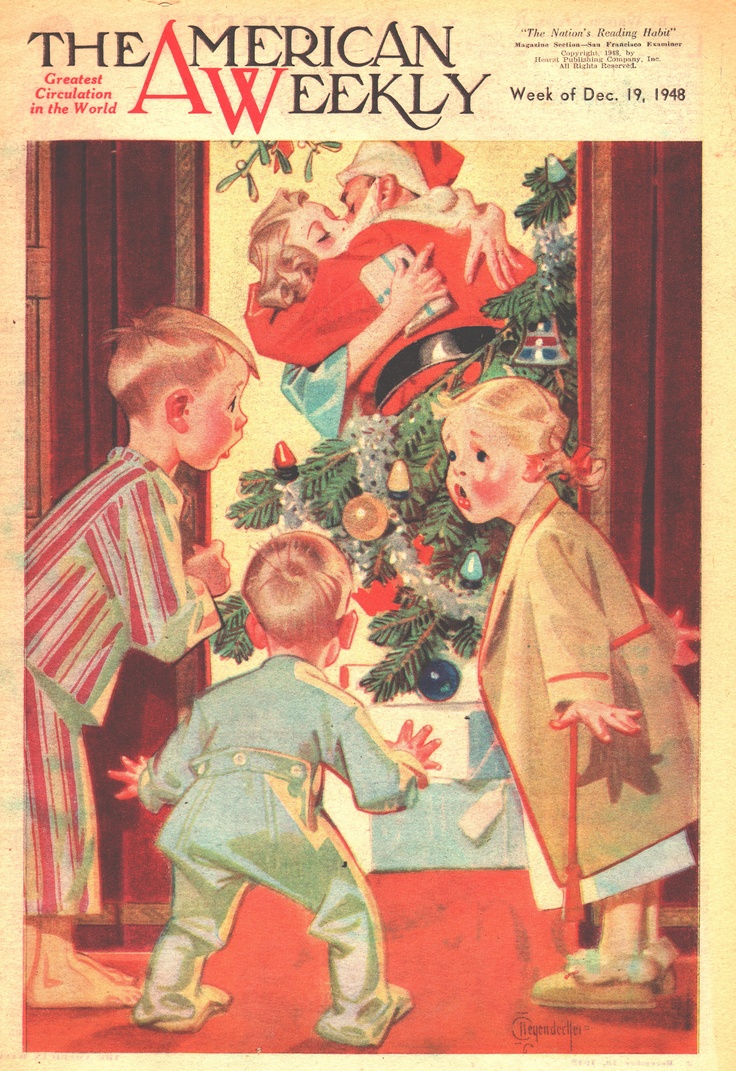 American Weekly cover - 19 December 1948
If it weren't for the signature, there is little here to indicate Leyendecker did this. 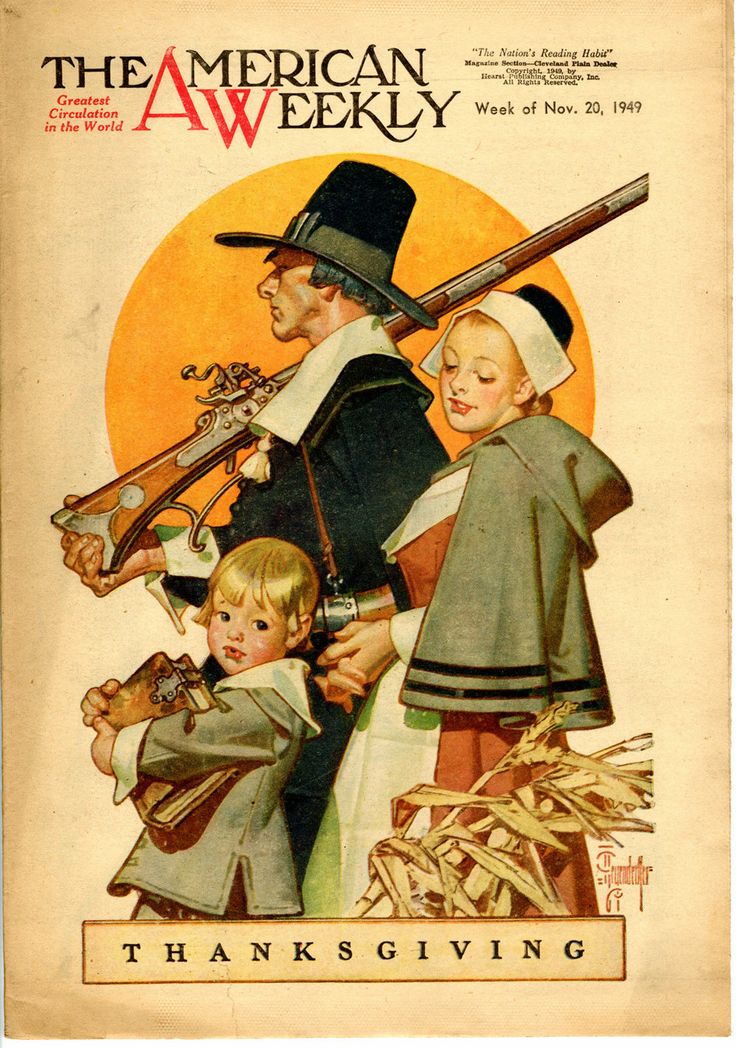 American Weekly cover - 20 November 1949
A very late illustration, again somewhat distant from his signature style. The orange circle is an echo of a Post cover theme from the 1920s and 30s.

Labels: Illustration, Towards the End