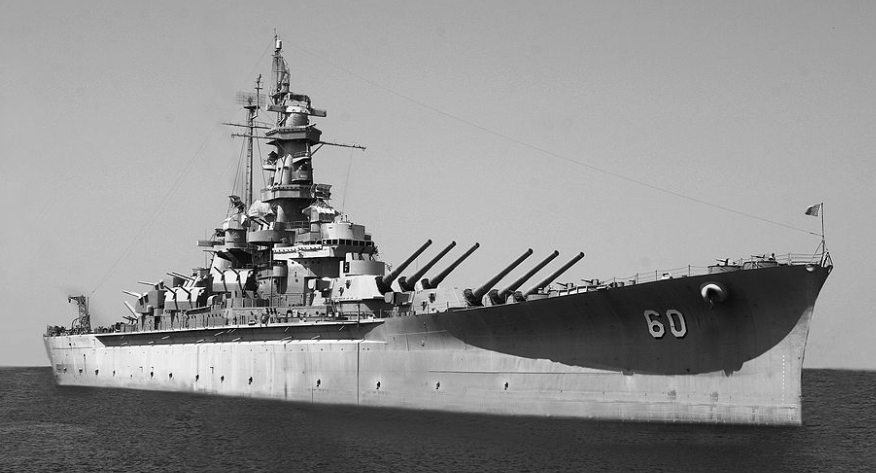 Starting when I was a boy and for decades thereafter I had trouble telling American cruisers from battleships. Specifically, cruisers and battleships of the World War 2 era from, say, 1935 to 1950. Before the 1930s cruiser and battleship appearances were fairly distinctly different.

I was not the only one who confused the two types. Aerial reconnaissance observers fairly often identified enemy cruisers as being battleships. An example is the early Japanese sighting reports of an American task force during the battle of Midway in June of 1942.

Consider the two photos at the top of this post. Which ship is the cruiser and which is the battleship?

Here are ways to distinguish the two types of warship: 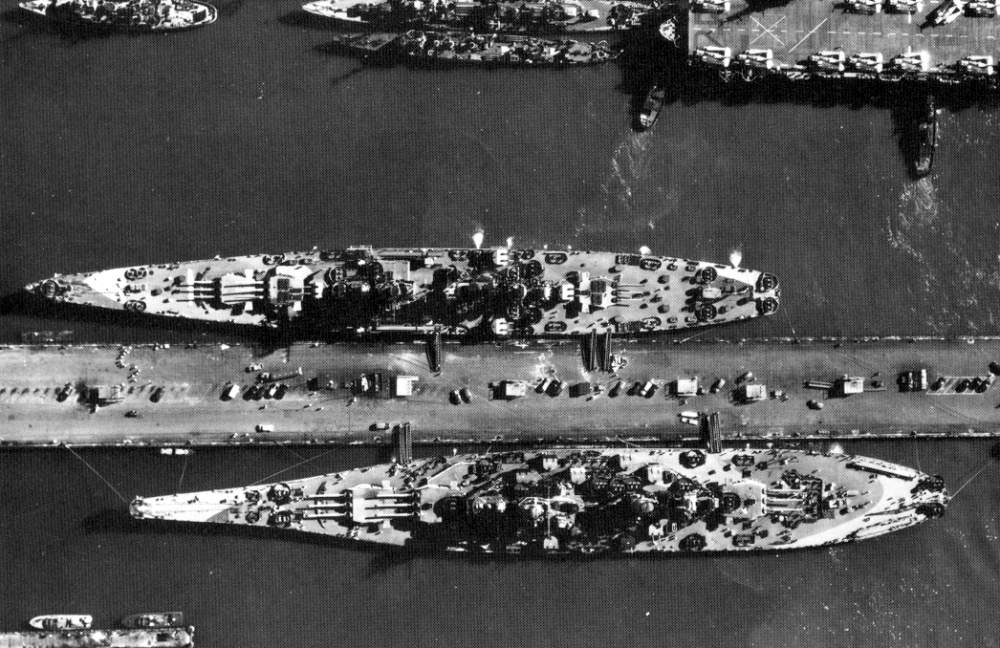 Top: CB-1 USS Alaska, bottom: BB-63 USS Missouri, docked at Norfolk, Virginia - 1944
The USS Alaska was a very large cruiser not typical of those in the rest of the US fleet (only two Alaska Class ships were built). Regardless, the image is instructive. Cruiser lengths were in the same range as contemporary battleships, sometimes a little shorter, sometimes even longer.

However, cruisers were narrower to allow higher speeds. The fineness ratio (waterline length to beam) of cruisers approached and sometimes equaled ten, whereas that of Great War era battleships was about six, and World War 2 "fast battleships" ranged from about 6.5 to around eight. More specifically, the final US dreadnaught class of the early 1920s (Colorados) had a fineness ratio of about 6.4, whereas the Missouri's was 8.2 and the Alaska's was 8.9.

I include this photo because it's the only aerial one I know of showing a cruiser and a battleship close together. So generally speaking, cruisers are proportionally narrower than battleships. 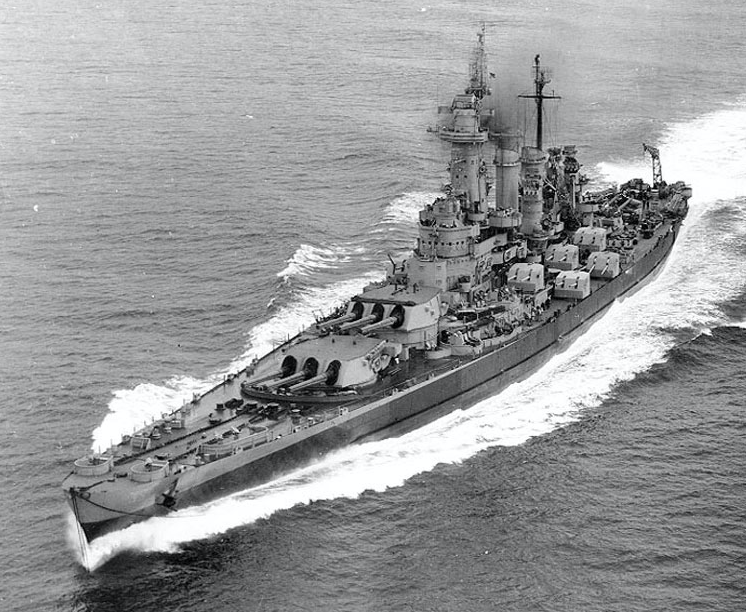 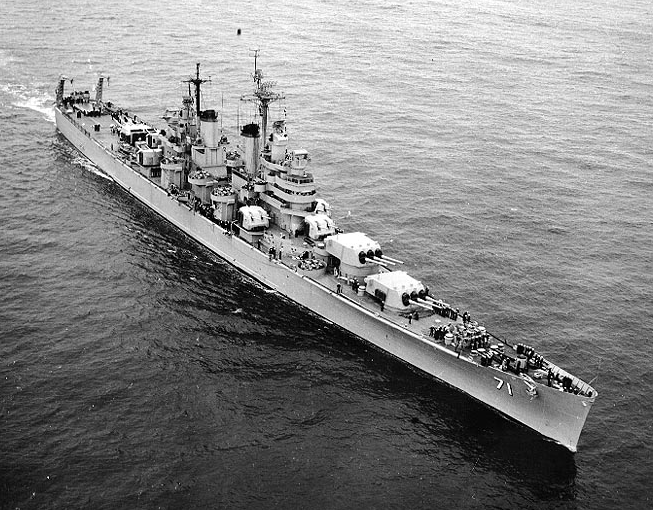 CA-71 USS Quincy
The Washington was one of the first US fast battleships, having a fineness ratio of 6.7, whereas the heavy cruiser Quincy's ratio was 9.5. These high-angle photos made the difference obvious, but seen from a low angle, as in the top images, the ships look similar because their superstructures are similar. Another difference is in the size of the main battery guns. Heavy cruisers has 8-inch guns and World War 2 US battleship classes had 16-inch guns. 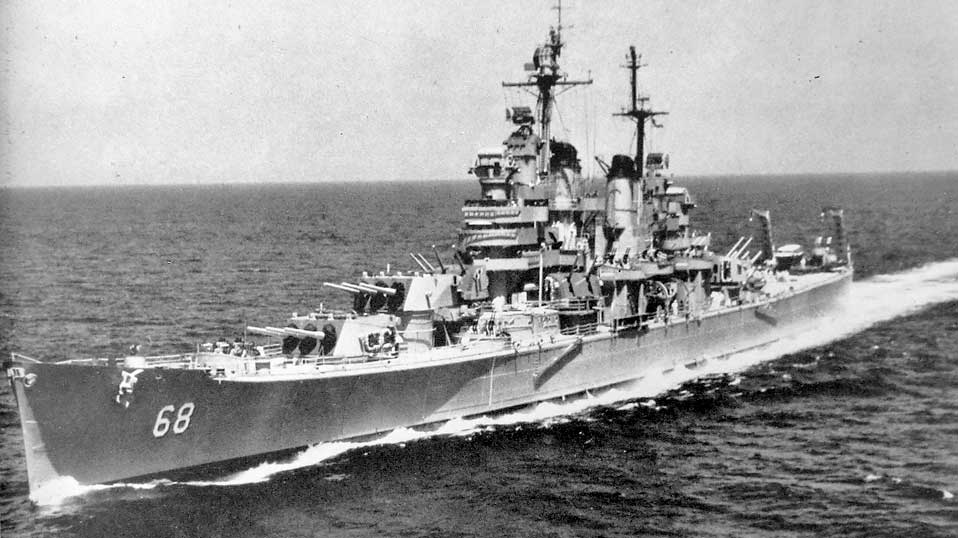 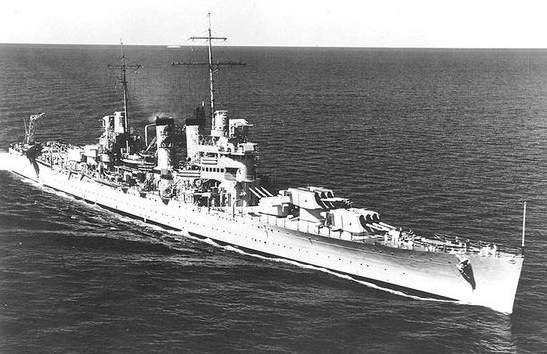 CL-48 USS Honolulu
For sake of completeness, we should consider appearance differences between heavy and light US cruisers. Baltimore's fineness ratio is 9.5 and that of the light cruiser Honolulu is 9.8, Baltimore being about ten percent longer. Setting aside displacements, light cruiser main armament was six-inch guns in greater numbers than heavy cruiser eight-inchers. So Honolulu has three main turrets forward of the bridge compared to Baltimore's two. This is distinctly different from battleship practice (aside from the Royal Navy's HMS Nelson and HMS Rodney that also had three turrets forward), making it easier to distinguish the Honolulu from a battleship. Later light cruiser classes had a different turret arrangement, but the comparatively delicate gun barrels are a strong difference from a battleship's armament.

Before the 1930s it was much easier to distinguish cruisers from battleships. Two examples from around 1920 are compared below.

CL-5 USS Milwaukee
Cruiser Milwaukee has small turrets with small guns positioned close to the bow and stern, with a long stretch in the mid area having little but four smokestacks.  Battleship Pennsylvania's topside elements are more compactly arranged.  The reason for this difference is that the cruiser was designed for high speed and therefore required a much larger machinery area whose boilers and engines developed 90,000 horsepower compared to Pennsylvania's 35,000.  The post-1935 battleships and cruisers mentioned in the first part of this post had about the same horsepower from more advanced, more compact machinery systems, which largely explains their similar appearance.

I had no idea...even though I worked at the USS Arizona Memorial for six months. So, how about destroyers?