Sir Walter Westley Russell (1867-1949) is yet another competent English painter I am including on this blog: the supply of same seems inexhaustible.

A brief biography is here. Even though Russell is not well known these days, he was noteworthy enough in his time to be knighted.

Like many English contemporaries, his style changed little over his career. Based on images found on the Internet, he tended to make paintings with a warm (in the color sense) feeling, though there are some that differ. It seems he liked to portray women. A quirk in many of those portraits was his use of backgrounds with green-blue wallpaper containing many small elements in other colors. Besides similar or identical background wallpaper, Russell usually included framed pictures hanging on those walls. Doubtless these details were from his house or studio. 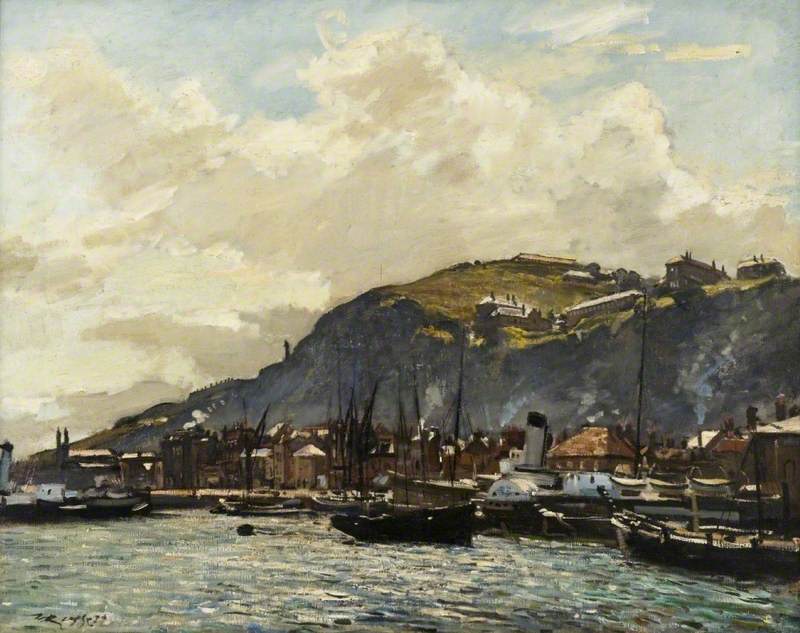 Dover
Russell did some landscape painting. 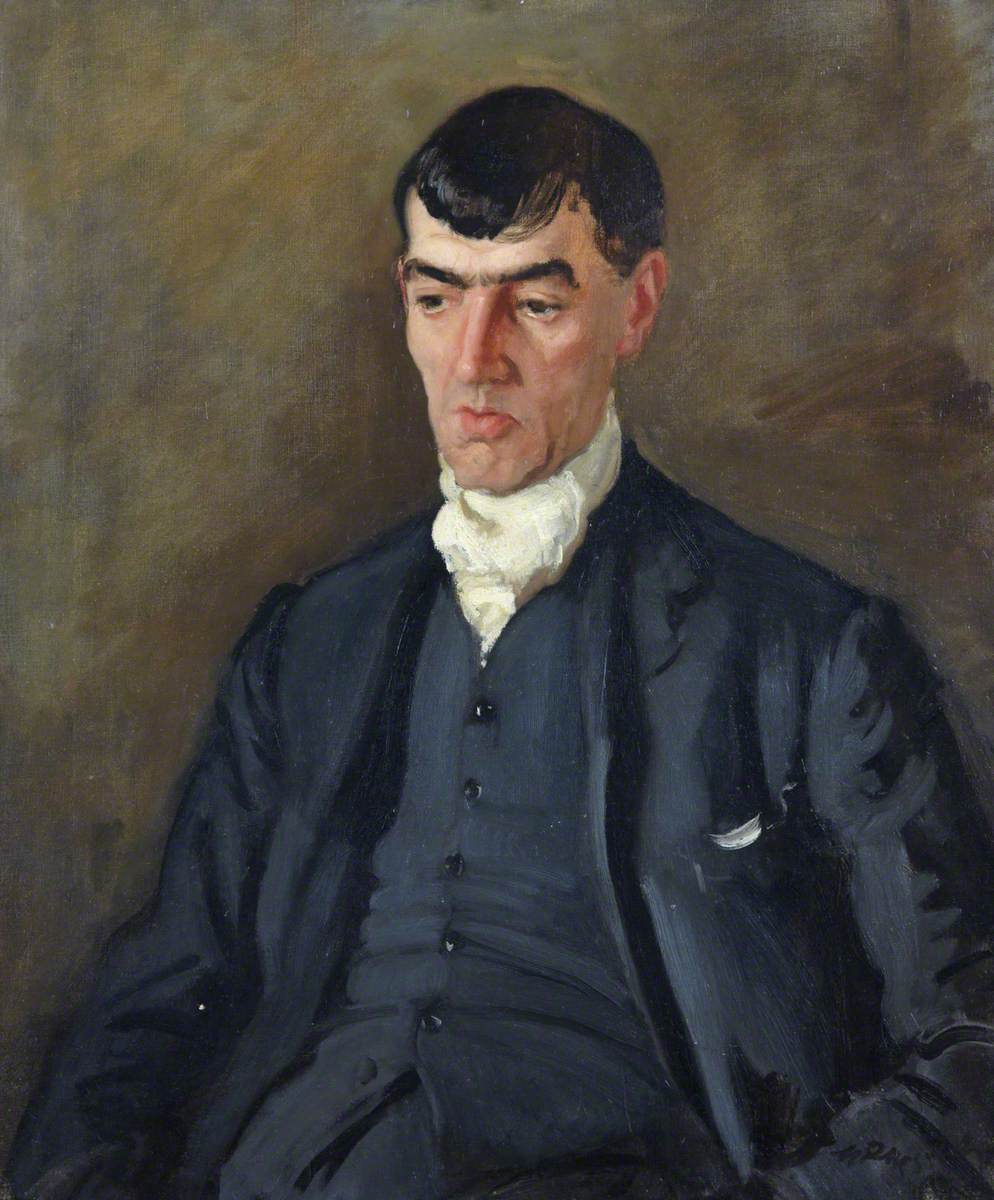 Joseph Crawhall
Crawhall was one of the Scottish "Glasgow Boys" group of painters. 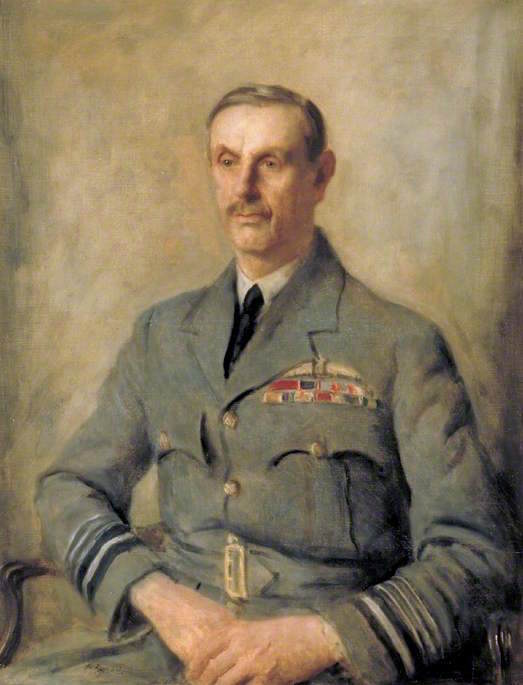 Air Chief Marshal Sir Hugh Dowding - 1942
"Stuffy" Dowding was in charge of aerial defenses during the Battle of Britain. 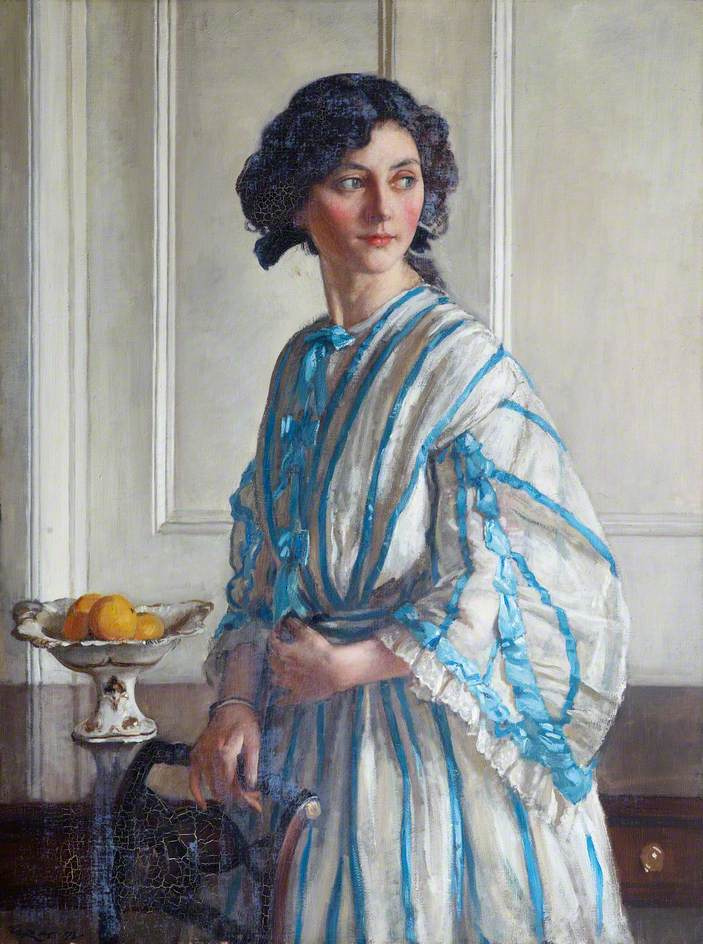 Camilla - c. 1910
A carefully done background, but no wallpaper in this comparatively early work. 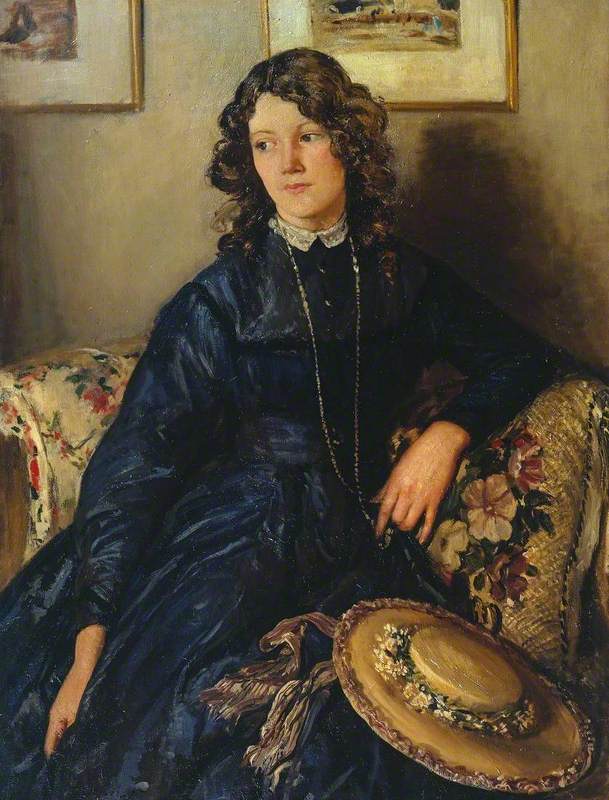 The Blue Dress - 1911
Still no wallpaper, but there are pictures on the background wall, so we're getting closer. 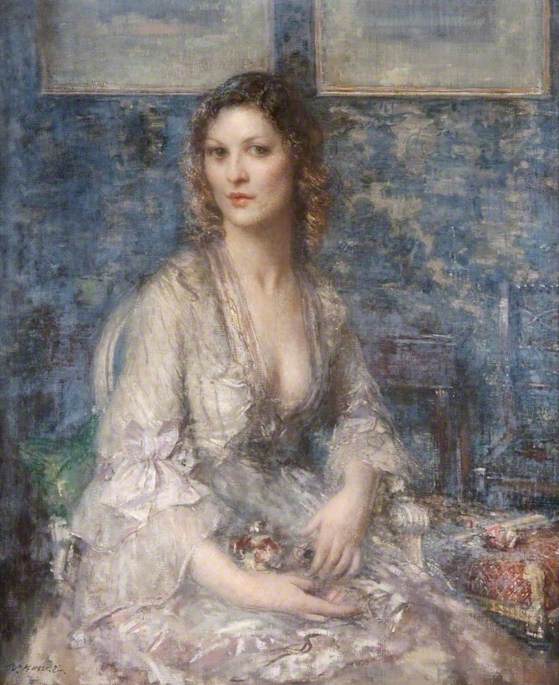 Amelia - c. 1937
A late portrait with wallpaper and pictures. Girl in a Muslin Dress
I don't have a date for this, but the background is archetypical Russell. 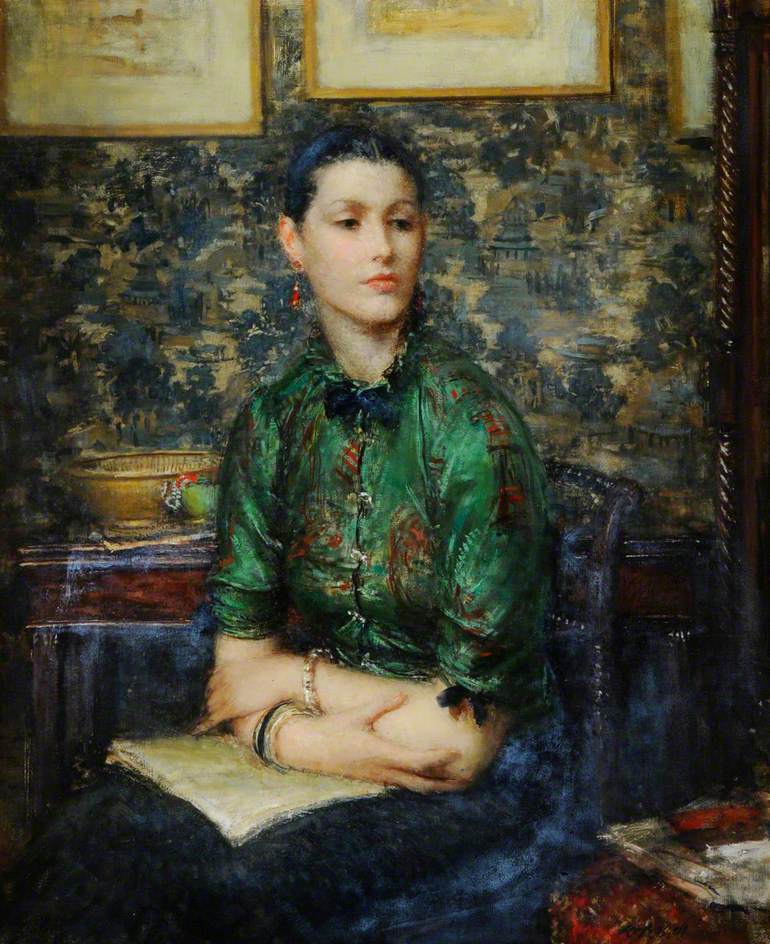 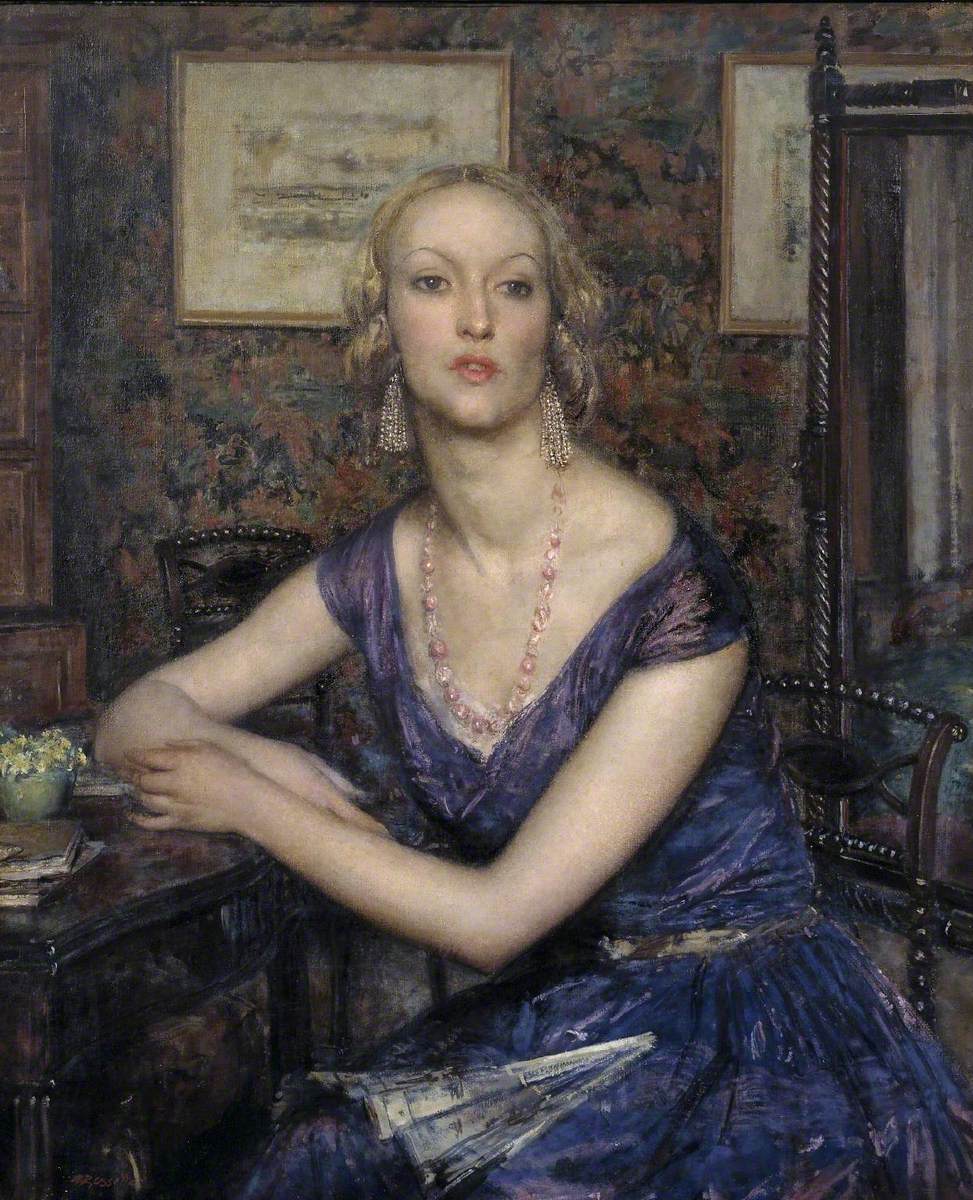 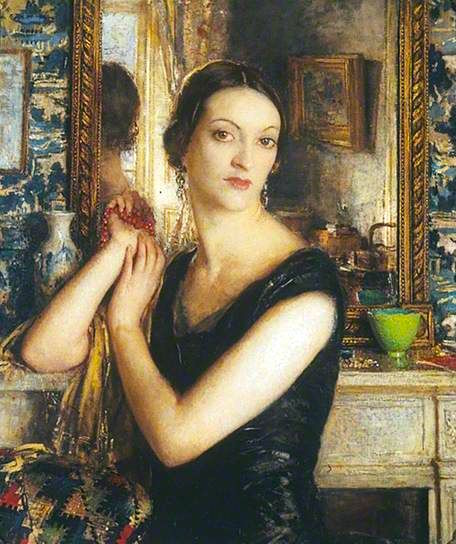 Give him credit -- maybe he liked a certain type of background but those faces and bodies look unique.

I dunno, a lot of the faces seem sort of similar. Maybe related people? All seem modern in not being a generalized and idealized look but something specific, one side or attitude of the person. Except Girl in a Muslin dress, who seems to be portrayed as being unattractively mannish and having an attitude problem.

But, yes, whatever use they are putting their painting skills to there is an endless supply of really good British artists from this time. This guy was really good.