This post is frustrating to write. That's because I want to make a point, but have nearly zero in the way of illustrations to support it.

This has to do with the Neuschwanstein Castle in Bavaria. The famous one "mad" King Ludwig II caused to be built that's now a major tourist attraction. I visited it perhaps 20 years ago and finally got around to seeing it again in May, this time paying more attention to its murals.

The place is filled with murals, most dealing with German legends that Richard Wagner (who Ludwig patronized) incorporated in his operas. A sense of this is conveyed here on the part of the Neuschwanstein Web site that presents a "tour" of the castle.

My problem? It's that I noticed that one artist who seemed especially good at conveying facial expressions -- something akin to stage actors who act even with their eyes to convey something to the audience. But the castle tour rules strongly state that no photography is permitted, so I couldn't capture images of examples. Worse, the number of images of Neuschanstein murals on the Internet is small, so only one decent example turned up. All of this meaning that it's essentially impossible to convey to you what I found on my tour of the place.

The artist who stagecraft I noticed is August Spieß (1841-1923), a Munich-based painter about whom little can be found other than this. Worse, there are almost no images of his work on the Web other than parts of some of his Neuschwanstein murals or possibly related work.

So the point of this post is to alert readers planning to visit Neuschwanstein to keep their eyes peeled for murals by Spieß in various rooms (they aren't all in Ludwig's bedroom). 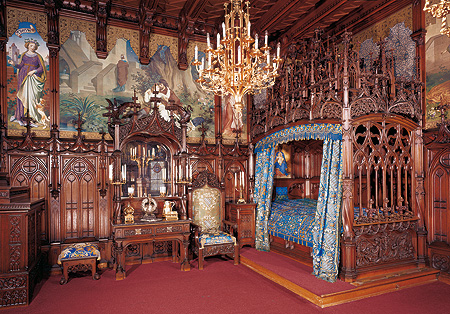 Ludwig's bedroom where the murals deal with Tristan and Isolde.

This is the only example I could find regarding stagecraft: note the woman at the left. The images below are also  dealing with Tristan and Isolde, but they lack that stagecraft. For some reason, Spieß portrayed Isolde as being rather bland, undramatic. 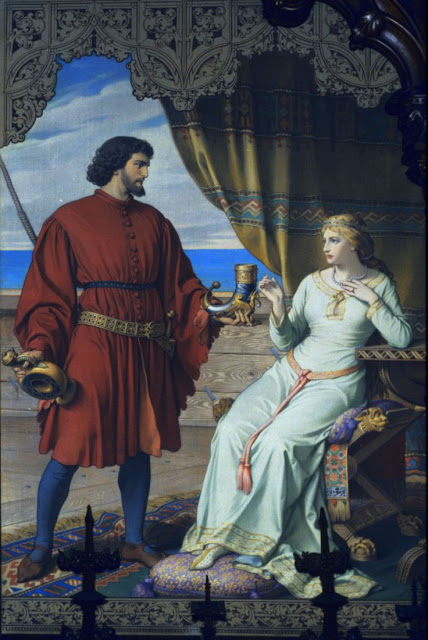 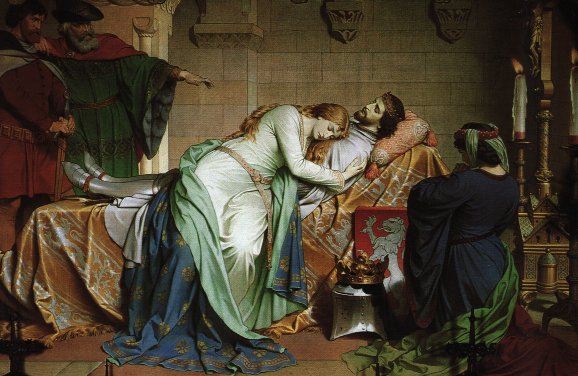 JESUS CHRIST!! FINALLY!!!! I have been looking for weeks trying to find out who was the painter of the murals of Neuschwainstein Castle!! Until I bump into your blog. So THANK YOU Donald Pittenger for this information. Finally there is a name linked to those paintings! Too bad that there is not much information nor images of his work other than what he did for King Ludwig II. How come!? Why? This is ridiculous. Even in the page, for which you provided a link, which is in German they barely said anything about him. But I bet that people who visit the castle love his work and so did Ludwig. And yet almost nothing about August Spieß. Unfair and disturbing!

Ivan -- Thank you for your report. Glad to be of service.