London's National Portrait Gallery has been using the centenary of the 1914-1918 Great War as a theme for presentations in some of its rooms. Among the paintings I saw there in April were three huge works commissioned by Sir Abraham Bailey who Wikipedia describes as a "South African diamond tycoon, politician, financier and cricketer."

These are group portraits of generals, admirals and statesmen. One is just simply that, so far as I can tell. But two of them seem to incorporate commentary, as I explain below in captions.

The images of entire paintings below are via the National Portrait Gallery, London. Click on images to enlarge. 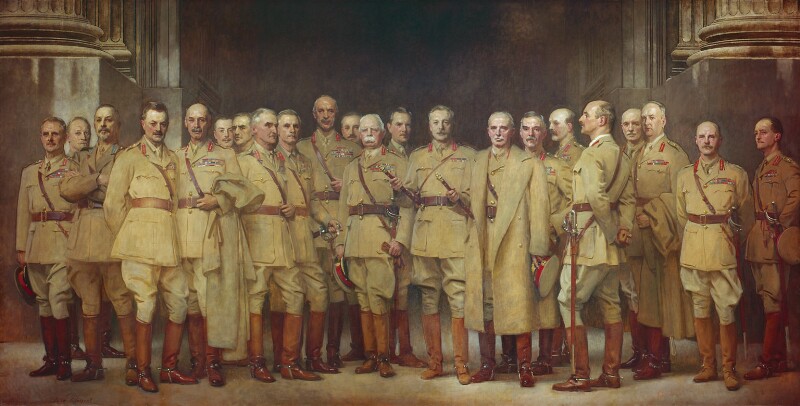 General Officers of World War I - John Singer Sargent - 1922
Wikipedia identifies them here. Most of the most senior officers (French, Haig and Robertson) are placed slightly to the right of center, but as best I can tell, Sargent and perhaps Bailey had no particular point to make in the form of placement of the subjects. 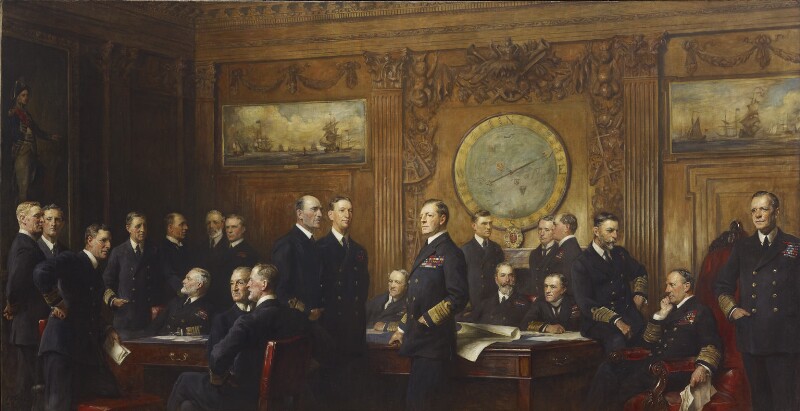 Naval Officers of World War I - Sir Arthur Stockdale Cope - 1921
This is not the case so far as admirals are concerned. At the far right is Sir John Jellicoe who commanded the Grand Fleet at the Battle of Jutland, the most important naval battle of the war and then became First Sea Lord of the Royal Navy (the top position for a serving officer). So why is he pushed off the an extreme side of the canvas while his successor, David Beatty, is shown at the center, his admiral's sleeve stripes prominent? Because of Royal Navy and British government politics. Jutland, or a similar battle, was expected by many in government and in the population at large to be another Trafalgar, where the enemy fleet was to have been destroyed. As it happened, the battle was something of a standoff, where the Royal Navy sustained the greater losses while the German High Seas Fleet pretty much stayed in port for the rest of the war -- strategically defeated. Many blamed Jellicoe for the mixed outcome while Beatty, who made some questionable decisions during the battle, was regarded as a hero. Given existing Royal Navy doctrine and weather conditions when the battle was fought, Jellicoe might have done better, but didn't do badly (in my opinion). But Beatty prevailed in the battle post-mortems, and was First Sea Lord when the painting was made. I suspect Bailey desired Jellicoe's placement at the far edge and Beatty's at the center. Statesmen of World War I - James Guthrie - 1924-1930
Guthrie was a "Glasgow Boy" near the end of his career when this painting was made. I wrote about him here. Depicted men are identified here. Interestingly, Prime Minister (1908-1916) H.H. Asquith is shown seated below the standing/gesturing Arthur Balfour, and Prime Minister (1916-1922) David Lloyd George is seated third from the left. One might think PMs would be more prominent. But the featured statesman is Winston Churchill, highlighted and facing the viewer. Churchill was First Lord of the Admiralty (1911-1915), Minister of Munitions (1917-1919) and Chancellor of the Exchequer (treasury secretary) 1924-1929 -- essentially the time the painting was made. While he was an important statesman in those days, he was probably not the most important. Again, I think Bailly influenced how he was depicted. 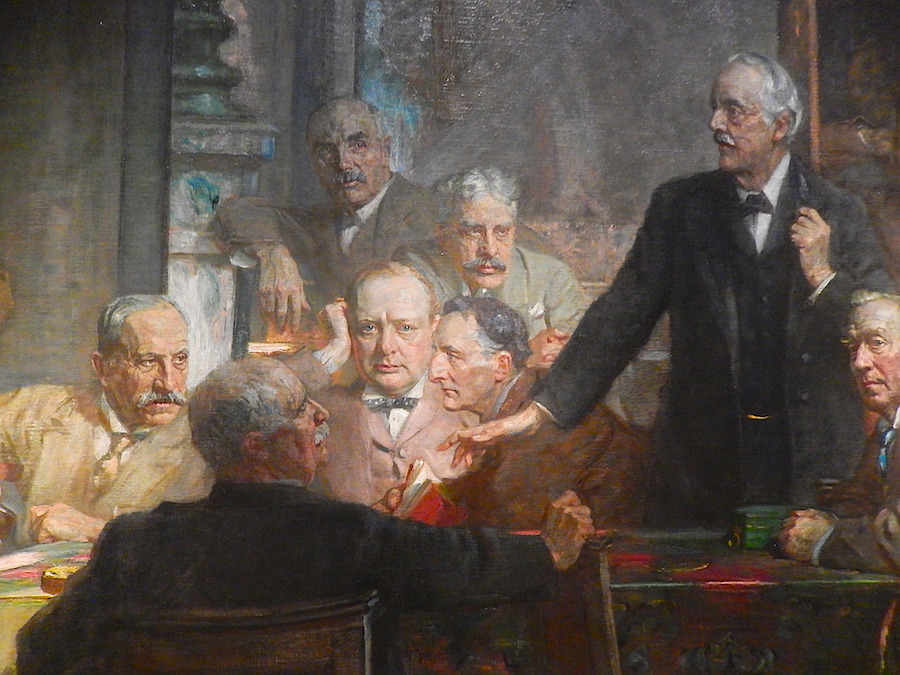 Statesmen of World War I - detail
This is a photo I took at the Portrait Gallery showing Guthrie's depiction of Churchill in greater detail.  He is looking directly at the viewer, while the others are not, thus also attracting further attention to him.  And as it turned out, he proved to be the most important one shown in light of future history.

I found a very similar group portrait painted by William Nicholson. The Canadian Headquarters Staff (dated 1918) is now in the Beaverbrook Collection of War Art, Canadian War Museum, Ottawa. I am guessing that John Singer Sargent, who painted the WW1 General Officers only a few years later (1922) might have seen the Nicholson painting.

Thanks for the link
Hels
https://melbourneblogger.blogspot.com/2012/03/william-nicholson-and-canadas-ww1.html