This probably isn't a big spectator sport in your neighborhood, but it was huge when I was growing up in Seattle. I'm talking about unlimited-class hydroplane racing.

This expensive sport was centered in Detroit for much of the first half of the 20th century and then caught fire in Seattle, as I'll explain below. Races are held elsewhere and there are pockets of interest in Madison, Indiana and a few other places, but Seattle and Detroit remain the heart of unlimited racing.

Being interested in design evolution, I've kept a casual eye out for changes to the physical form of unlimited hydros for years. The photos below summarize what's been happening these past 80 years. 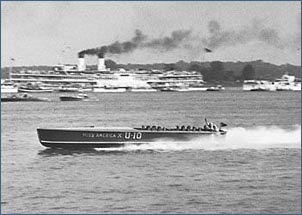 Miss America X
Gar Wood's Miss America racers dominated the sport into the early 1930s. The Miss America shown above had a shallow V-bottom and "steps" such as are found on the bottoms of flying boats and float-plane floats. The concept was to lift the boat as high above water as possible so that it would tend to skip across the surface rather than plow through it. This goal is constant in power boat racing; what varies is the means used to maximize the effect. 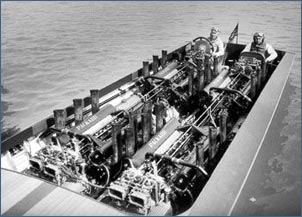 Miss America X's four (!) engines
Miss America X was unusual in that it had four motors. Most unlimiteds make do with one and occasionally have two.

Tempo VI, owned by bandleader Guy Lombardo
Tempo VI, a pre-World War 2 design incorporates sponsons mounted on each side of the front part of the hull. These further raised the boat above the water; the "wetted area" comprised the rear underside of each sponson and the underside of the hull near the stern. 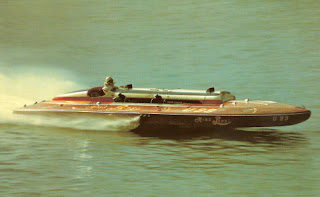 Miss Pepsi
Somewhat retrograde circa-1950 was Miss Pepsi which had a step-type hull similar to that of Miss America. Regardless, the Pepsi was very competitive against even the advanced designs exemplified by Slo-Mo-Shun IV (below). 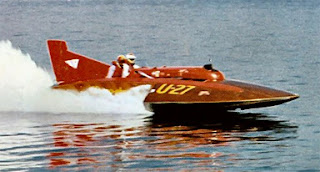 Slo-Mo-Shun IV
Slo-Mo was designed by Ted Jones and owned by Seattle Chrysler dealer Stanley Sayres. It set a world straightaway speed record for boats in 1950, hitting 160 miles per hour on Lake Washington. Later that summer it traveled to Detroit and easily won the Gold Cup race which then was held in Seattle for the next few years. 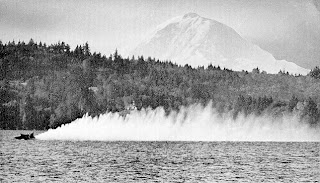 Slo-Mo-Shun IV at speed
This shows Slo-Mo as she might have looked when setting the speed record. Note the characteristic high "rooster tail" of spray. This was a side-effect of Jones' design innovation. The wetted areas were small patches of the rear undersides of the sponsons. The rear part of the hull did not scrape the water as did Tempo VI. Instead, the final touch point of the so-called "three-pointer" was the propeller itself. It's the half-submerged prop that kicks up the rooster tail. For the last 60 years nearly all unlimited hydros followed this design approach. 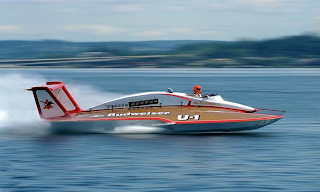 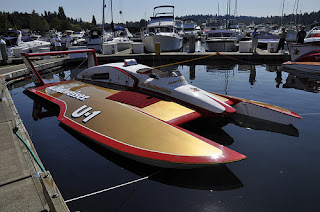 Front view of circa-1980 Miss Budweiser
As with Formula 1 racing cars, hydro designers decided that it was advantageous to improve driver visibility and improve comfort (sitting behind the engine exposed him to heat and fumes). Hence the "cab forward" design illustrated here. 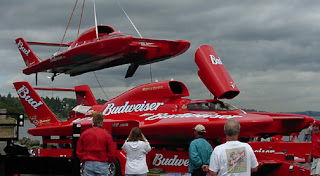 Turbine-powered Miss Budweisers
For many years after World War 2 unlimited hydroplanes were powered by water cooled fighter plane engines-- Allisons at first, later by Rolls-Royce/Packard motors. But these were temperamental when modified to power racing boats and supplies of them were drying up. By the 1990s most designers switched to gas turbine power; note the air intakes shown in the photo. (The turbine drives a propeller, just as piston engines did.)

Another concern was driver safety. Unlimited hydro racing accidents cost the lives of a number of drivers over the years and resulted in serious, career-ending injuries to others. A solution that has worked well is the adaptation of cockpits from F-16 fighters for hydro use. Rather than being thrown out of the boat, the driver rides out the accident strapped to his seat in a waterproof enclosure with its emergency oxygen supply. These cockpits can be seen in the photo. 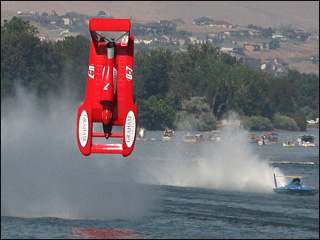 Flipped hydroplane -- shows plan view of recent designs
Slo-Mo-Shun IV had a spade-like profile when seen from above. This design proved to be too prone to the bow end lifting the boat into a spectacular back-flip. Some of this might have been due to aerodynamic lift if the boat's angle of attack changed, but the main reason had to do with air pushing on the underside of the hull, a force that becomes ever-stronger as the angle deviated from the horizontal. Over time the spade shape was abandoned for a "pickle fork" treatment that, suitably evolved by wind tunnel testing, resulted in the plan view seen here. Note the holes toward the front that lessen a potential flip-producing force. Obviously, flips still happen. But they now are more likely to result from digging into water stirred up by racing activity than being lifted higher after a bounce.

Many subtle improvements have been made, so today's hydros can lap a 3-mile racetrack-shaped course at speeds of 150 miles per hour -- not much less than Slo-Mo's 1950 straightaway record run. (Records after a 178 mph run in 1952 by Slo-Mo-Shun IV were set by prop-less jet-propelled boats. The current mark is just under 318 mph, set in 1978 -- Wikipedia entry here.)

Posted by Donald Pittenger at 5:57 AM

Thanks for the great page on unlimiteds. As a kid growing up in Seattle, I thought unlimited hydroplane racing was the most popular sport in the world. Every kid would tow plywood hydros around behind their bikes and race tiny balsa replicas down the gutter using a hose for a water supoply.

Now that I live in Virginia it is hard to get any hydro action at all. My DVR is set to record anything with the word hydroplane in it, and not a single show has recorded.

Back in the old days, they used to call them "Thunderboats" and sound was a big part of the show. I realize they couldn't go on using WW2 airplane engines forever, but I cant' help but feel that the turbine engines killed Unlimited racing. No more thunder - only a whoosh...