If Salvador Dali Had Styled Cars

A comparatively easy way to increase fuel efficiency in the wake of the gasoline shortages on the 1970s was to improve the streamlining of cars.  Ford was one of the first American manufacturers to do this in the early-to-mid 1980s, the best-known example being the Taurus line.  These early wind tunnel tested Fords tended to have windows featuring large-radius corners.  This was something in the spirit of 1936 vintage models from General Motors, Chrysler and others introducing all-steel bodies in those days when metal stamping technology could not easily accommodate tight surface curves.

But when the aerodynamic Fords appeared, stamping technology didn't force large-radius window corners; stylists apparently chose strong rounding as a means of emphasizing the curved design theme derived from the wind tunnel testing.  At the time, I felt that all that curving wasn't really necessary and resulted in designs that seemed excessively soft looking; more crisp styling elements in the details would have been better.  And of course others came to the same conclusion, so today's aerodynamically efficient cars include many crisp elements along with the curves.

So why, when it came time for a complete 1996 redesign on the Taurus, did Jack Telnack and his crew decide to emphasize curves even more than they did for the original Taurus design?  I have no idea, other than they might have decided to zig while the rest of the industry zagged.  Or perhaps corporate management interfered.

In any case, while the Taurus design had some nice features (I like the subtle sculpting around the front of the hood and fenders), other parts of the car are simply odd -- especially the windows at or near the rear along with the instrument panel.

In fact, I now entertain the amusing thought that surrealist artist Salvador Dalí of drooping watches fame could have been on the Taurus styling team had he lived long enough.  This is especially true for the station wagon model, the subject of this post. 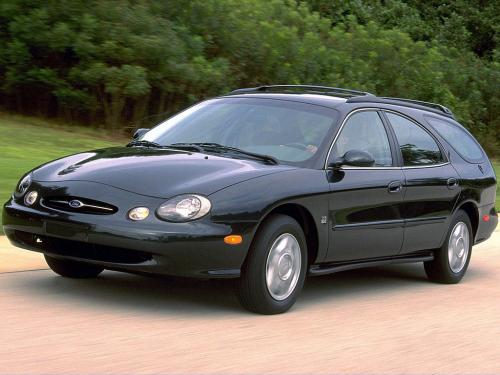 Here is a general view of the 1996 Taurus station wagon showing the subtle front end styling and hinting at the window curves towards the rear. 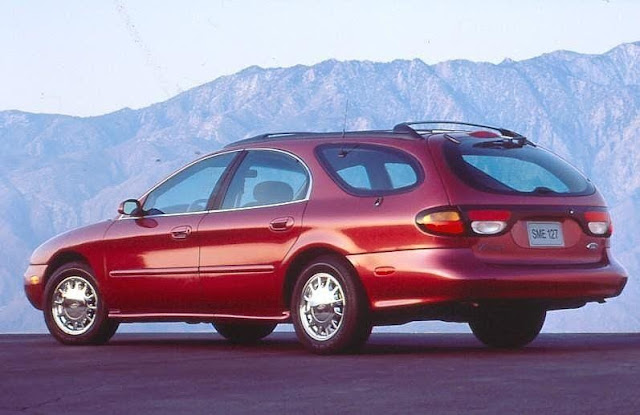 This appears to be a factory photo showing the rear of the wagon.  It was taken from close to the ground, a view few people normally have of the car. 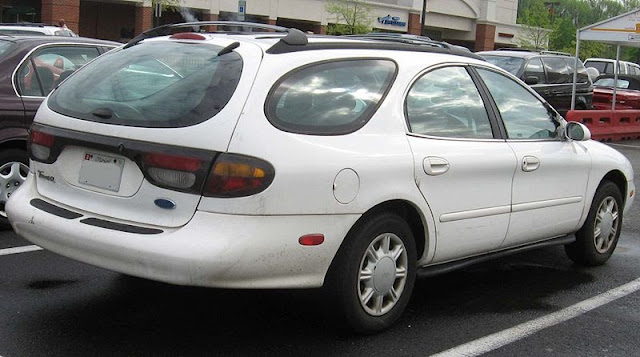 I found this image on the Internet.  The car is painted white, eliminating distracting highlights and allowing us a good view of the large, rounded, droopy looking window shapes around the rear.  The rear passenger door looks to be the same as that for the sedan, a cost-saving detail (no special door tooling for the station wagon version).  The problem, as I see it, is that the rear area window treatment is not integrated with the rest of the design.  In particular, the upper edge of the rear side windows fails to link to the upper edge curves of the other side windows, giving the window a tacked-on appearance. 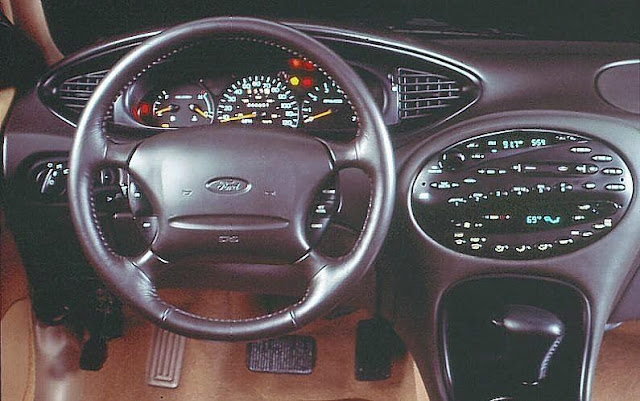 This is the Taurus instrument panel where curves further abound.  To me, the problem area is the cluster in the oval at the center, just forward of the shifter lever.  Control buttons are strewn across it in a somewhat organic pattern, not in well organized (from an ergonomics standpoint) groupings.