He was born in Russia, fought in the Great War for the Imperial army, served in the anti-Bolshevik White army, and then fled the country for China. He eventually came to the USA, painted murals and canvas-based paintings, and taught art at Stanford University. As part of his mural painting, he worked with Diego Rivera which, perhaps along with other factors, led him to left-wing politics. Following the death of his wife and retirement from Stanford, Arnautoff moved to the Soviet Union, dying in Leningrad.

So he "progressed" from anti-Bolshevism to leftism, depicting proletarians while teaching at an elite university. I'd call it a nice trick, but aside from the anti-Bolshevik part, the rest isn't uncommon today.

As for his mural style, Arnautoff was mainstream in his Modernism-lite technique. His approach to subject matter was essentially representational, but tempered by modernist conventions so that picture-plane flatness, considerable simplification, and a little distortion of forms were included. The result has a cartoon-like character to my eyes. But that style was a 1930s artistic fashion.

His major work was a mural titled "City Life" that was part of the Coit Tower mural set (that was recently restored). It is featured in the images below that include a few other works intended to provide some sense of his artistic range. Click on images to enlarge.

Here is an image of the entire City Life mural. At the center is an actual door that Arnautoff framed using a news stand. 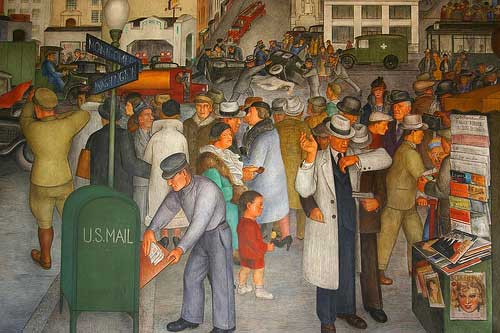 A detail from the left-hand panel. Near the news stand is a man being held up at gunpoint. In the upper center area is a dead man in the street being photographed by newsmen. Above it (not seen in this segment) is a street leading up to San Francisco's Legion of Honor art museum that in fact was far across town beyond the Golden Gate. 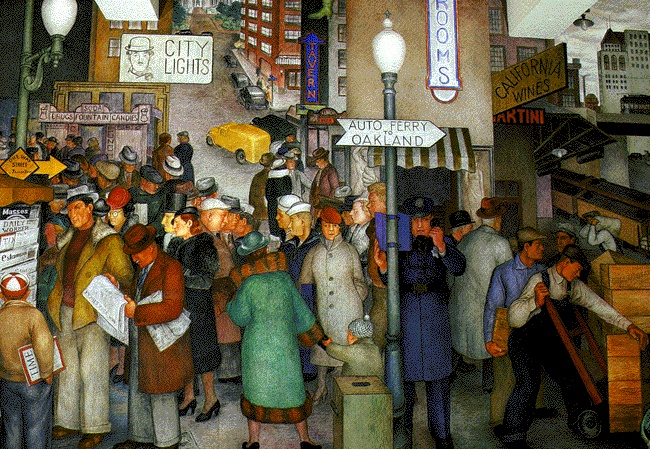 Detail from the right-hand panel. 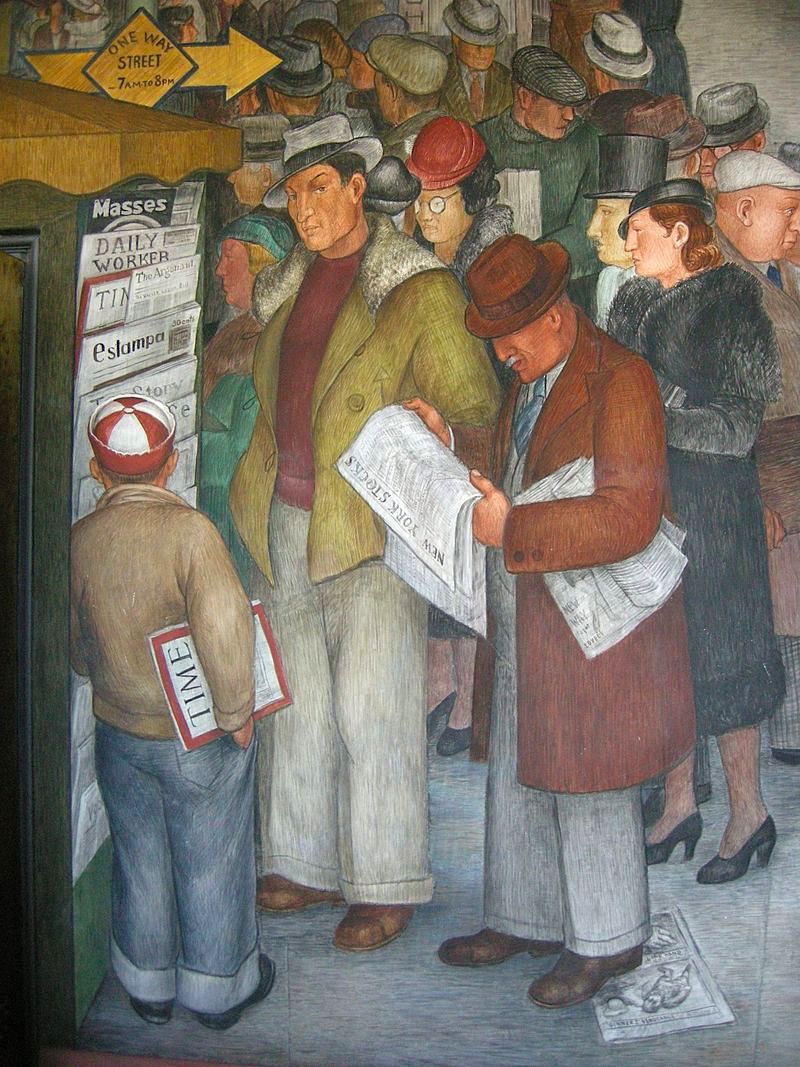 And a further detail. The tall man in the image is a self-portrait of the artist. The newspaper rack above the boy at the left contains "The Masses," a far-left magazine and the "Daily Worker," the U.S. Communist Party newspaper. Arnautoff took some critical heat from this sly stunt, but it was far less blatantly leftist than what could be seen in other Coit Tower murals. Almost all the murals were politicized to some degree because most of the artists were leftist. But keep in mind that the Great Depression was in full force in 1933 and '34 and that Stalin's show trials and his later deal with Hitler (which gave a number of Communist sympathizers food for thought) were years in the future. 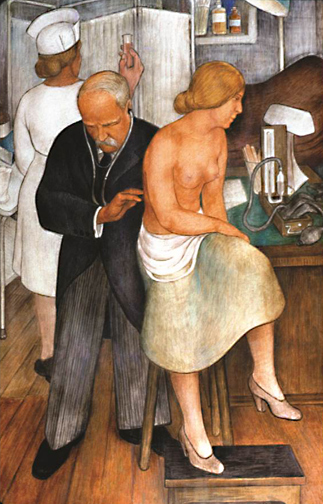 From a 1932 vintage mural he did for the Palo Alto Medical Center. The bared breasts were controversial. 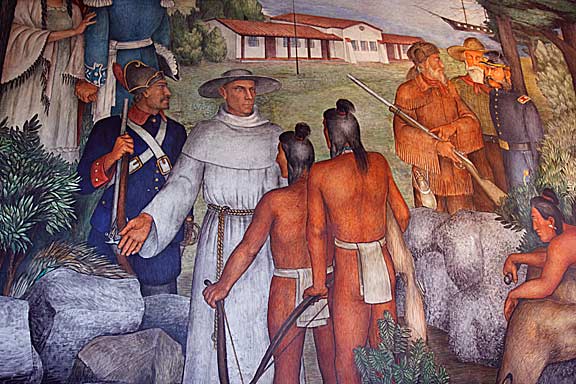 Photo of a 1935 mural at the Presidio Chapel -- the Presidio being a military base established by Spaniards and occupied by the U.S. Army at the time the mural was painted. 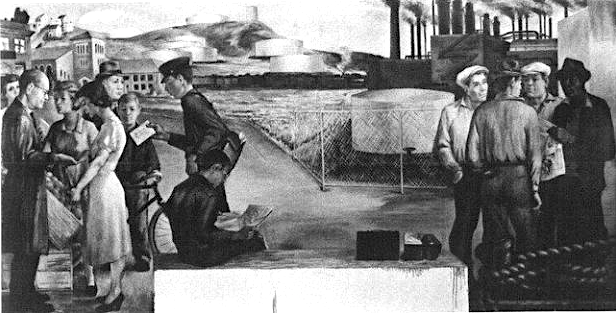 Photo of a 1940 mural for the Richmond, California Post Office. It was removed and forgotten for many years, but turned up not long ago. 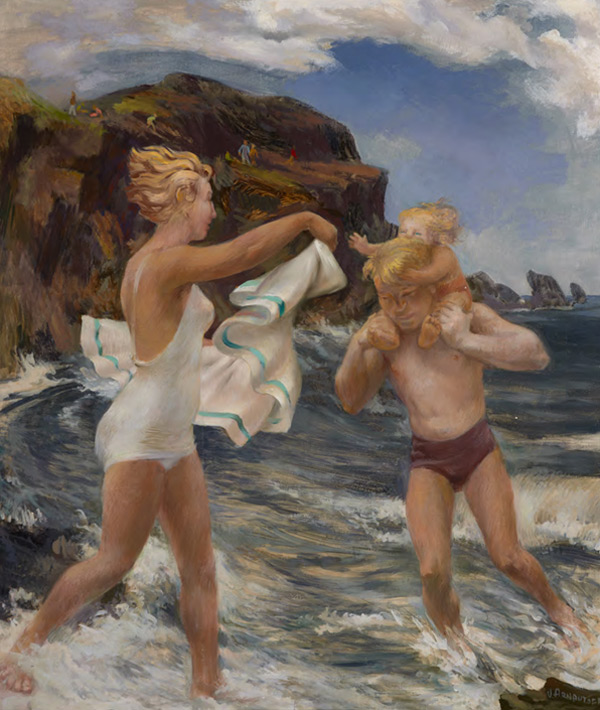 Easel oil painting "At Baker Beach" from around 1945. Modernist flatness is gone, but the male at the right has the head of an adult and much of the body of a boy. Makes me wonder what he was teaching Stanford art students at the time. 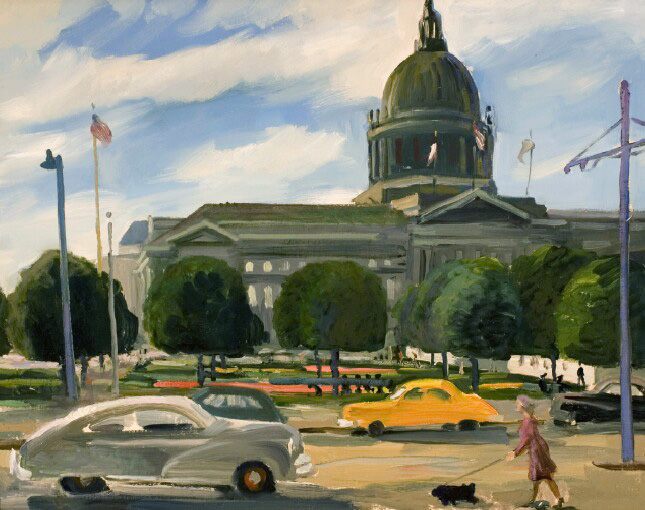 "City Hall, San Francisco" from the late 1940s (I'm using the poorly drawn cars to date this). Arnautoff is far from his precise mural style here.

I really love Deco murals, as long as they deal with workers, professionals and artists. What a shame the 1910 mural for the Richmond Post Office was lost. It looked as if it depicted industrial workers and factories, not glamorous women in fur coats and men in gorgeous three piece suits.