Even though France was humiliated in the 1870-71 Franco-Prussian War, paintings featuring military subjects were popular in France during the early decades of the Third Republic. Perhaps the most prolific artist of that genre was Jean-Baptiste Édouard Detaille (1848-1912), who had a reputation for thorough research on details of uniforms, weapons and battles of both the Napoleonic era and 1870 and its aftermath. His Wikipedia entry is here.

Perhaps because he churned out so many drawings and paintings, a few being huge dioramas, I find them not usually satisfying as works of art. I mostly prefer the work of his contemporary, Alphonse de Neuville, who I wrote about here. 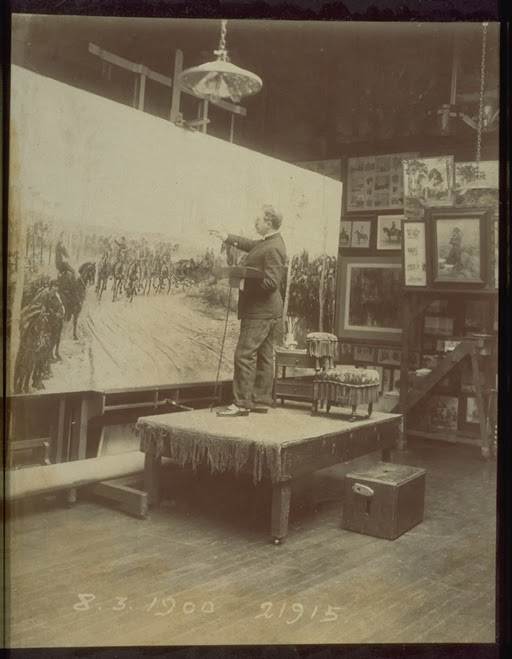 Photo of Detaille at work
Here he is, dabbing away on a huge canvas. Many human figures, horses and other items to depict, and he probably didn't have the time to paint them with thought and care. Yet this sort of painting was what he was known for, so he kept making them. 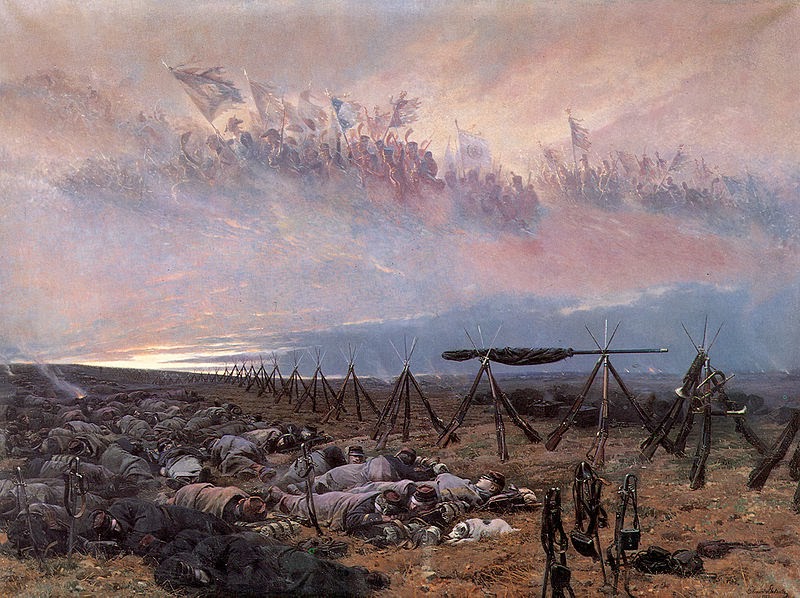 Le rêve - 1888
This immense painting was on display at the Musée d'Orsay when I visited last September. It shows bivouacing contemporary (or 1870) French soldiers dreaming of the gloire of their Napoleonic forebears. Despite its size, it doesn't seem to have been as rushed as some of his other works, which is perhaps why the Orsay displayed it. 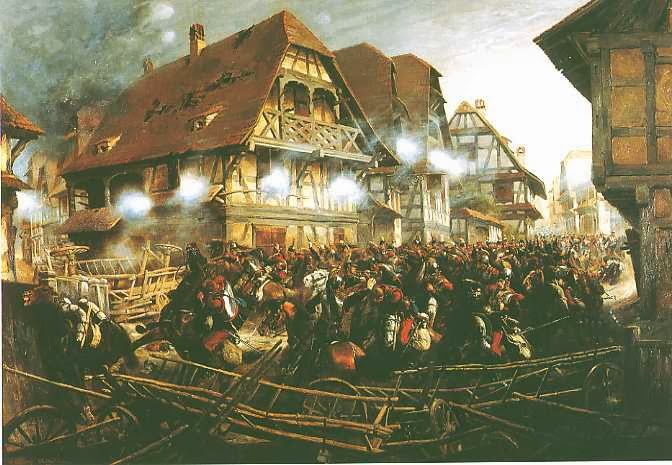 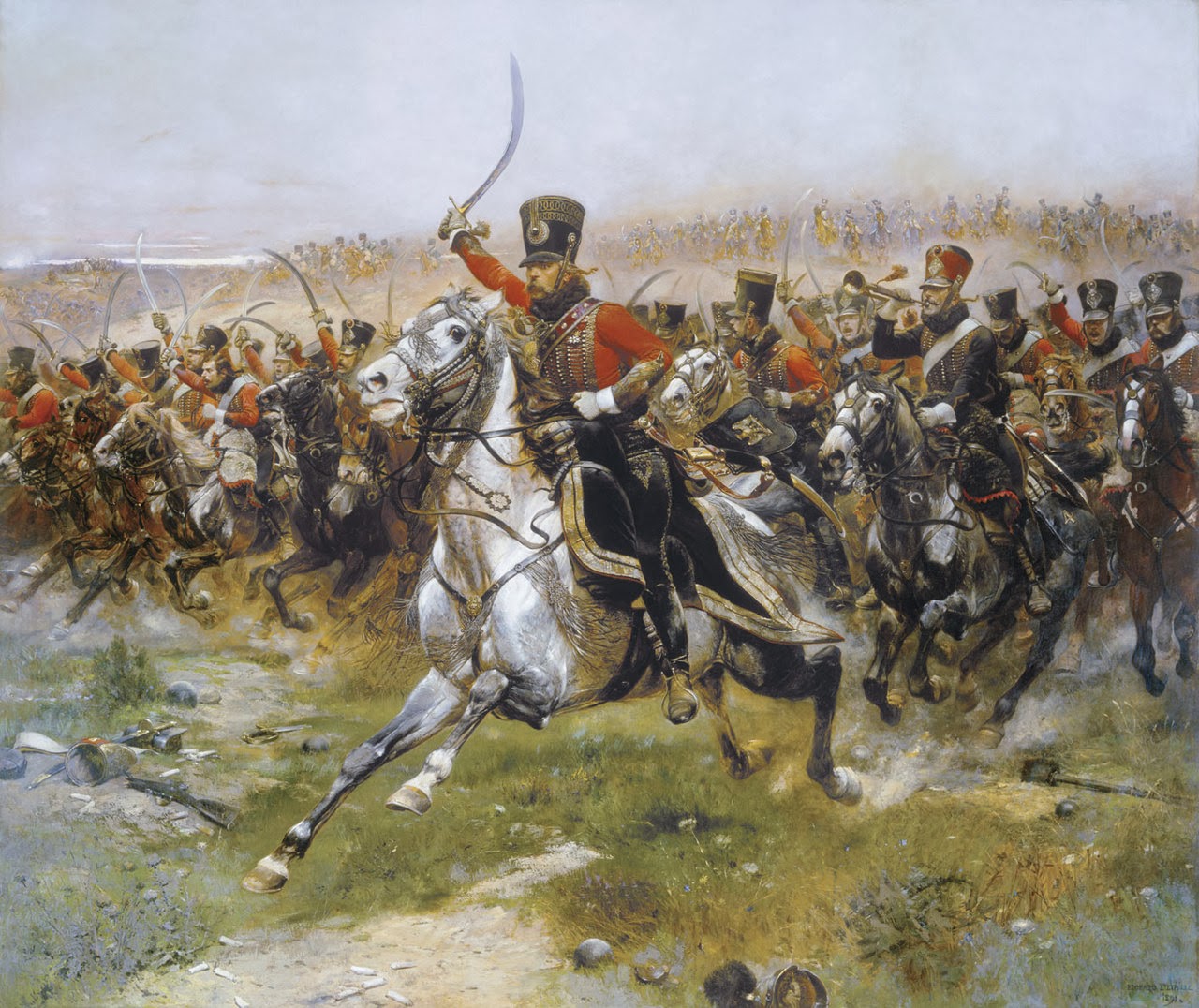 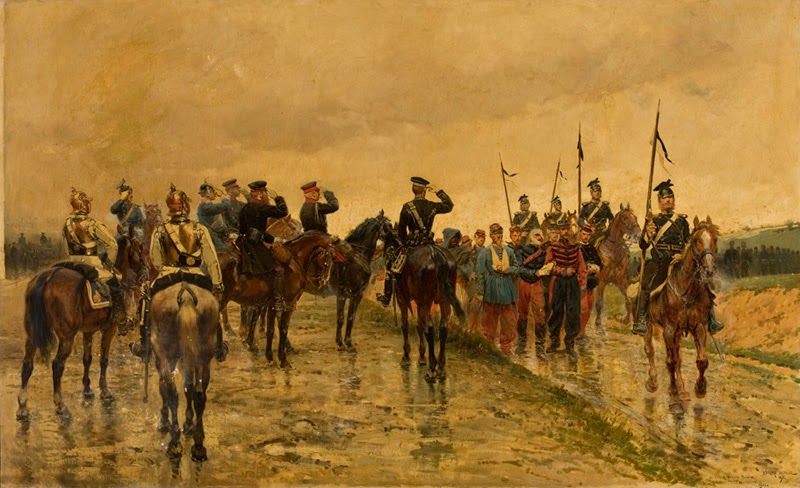 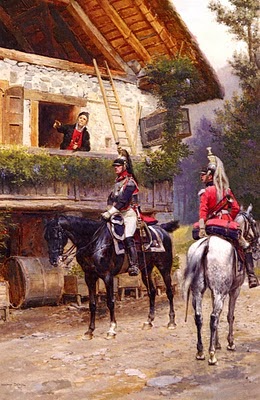 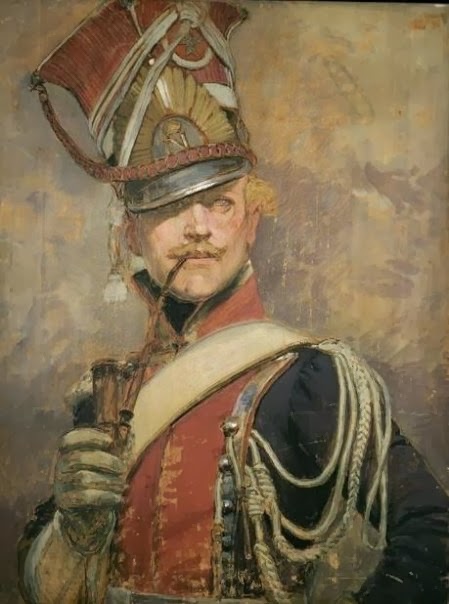 Hussar
I don't know if this was an elaborate sketch or a finished work. Regardless, as best I can tell from this digital image, it's nicely done. Apparently when he wasn't painting vast action scenes, Detaille was able to focus and show us what he was capable of.

Un officier des cuirassiers, fin 19eme
Another portrait of sorts, but a crowd of soldiers and horses manage to intrude as background.

"Le rêve" definitely shows contemporary (not 1870) French soldiers. This is clearly shown by the Lebel Mle 1886 stacked rifles (the first service rifle in the world ro use smokeless powder), which were state of the art at the time and not even widely issued. The fact Detaille depicted them instead of the still more prevalent and familiar Grass, means he wanted to portay the sleeping soldiers as the most modern French infantry of the time who nevertheless dreamed of retrieving France's ancient "gloire et grandeur"

I’ve looked at this article and some of your others. I’m not sure where you’re coming from in terms of a stance on academic art, other than some rather negative and unformed opinions on Modernism which don’t hold much water, especially as you don’t seem to be aware of post modernism which addressed modernism in a critical way 40 years ago and continues to this day. Unfortunately many of the liberations of post modernism have created their own problems. One of which is the concept of alternative narratives, all the rage these days across the spectrum of art and politics.

I am a realist painter as well as a history buff and have long been aware of Detaille. None of his paintings are ‘churned out’. If you read something you know something about and find many of the research completely wrong it immediately makes you question the credentials of the author. That isn’t a hussar, those aren’t dragoons. This isn’t research or art criticism. It’s more Ill informed opinions and blurry information going out into the cosmos.