Terence Cuneo (1907-1996) was a prominent British illustrator who specialized in mechanical objects, yet was quite capable of depicting people -- something some tech artists have trouble with. On the other hand, there are a number of artists who are good at people but have serious trouble with things such as cars and airplanes. So Cuneo, himself the son of a successful illustrator, was something of an all-rounder. His limitation was that he was a run-of-the-mill storyteller in the illustration sense. That is, he could depict scenes of fierce action, but they usually were a kind of snapshot without much of a plot or backstory. To some degree that might have been what his clients wanted, so I can't quite be categorical regarding this.

Cuneo's Wikipedia entry is here, and here is a link to my post about his railroad illustrations.

This post shows examples of Cuneo's work over the range of his typical subjects. 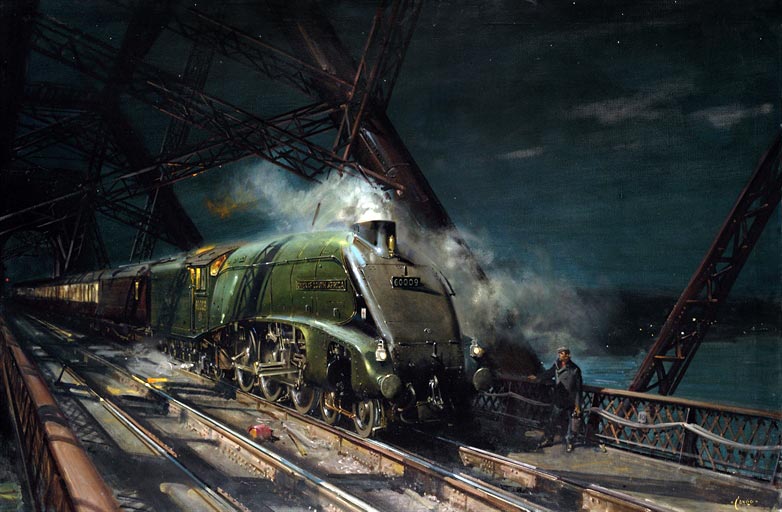 Railroad illustration: "Crossing the Forth" 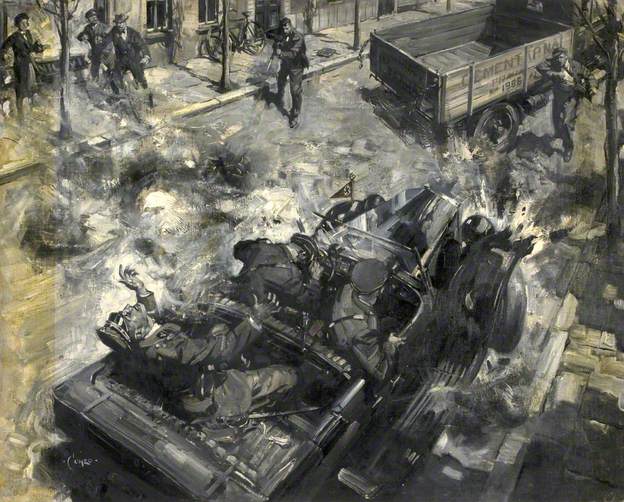 The assassination of Reinhard Heydrich in Prague, 27 May 1942. 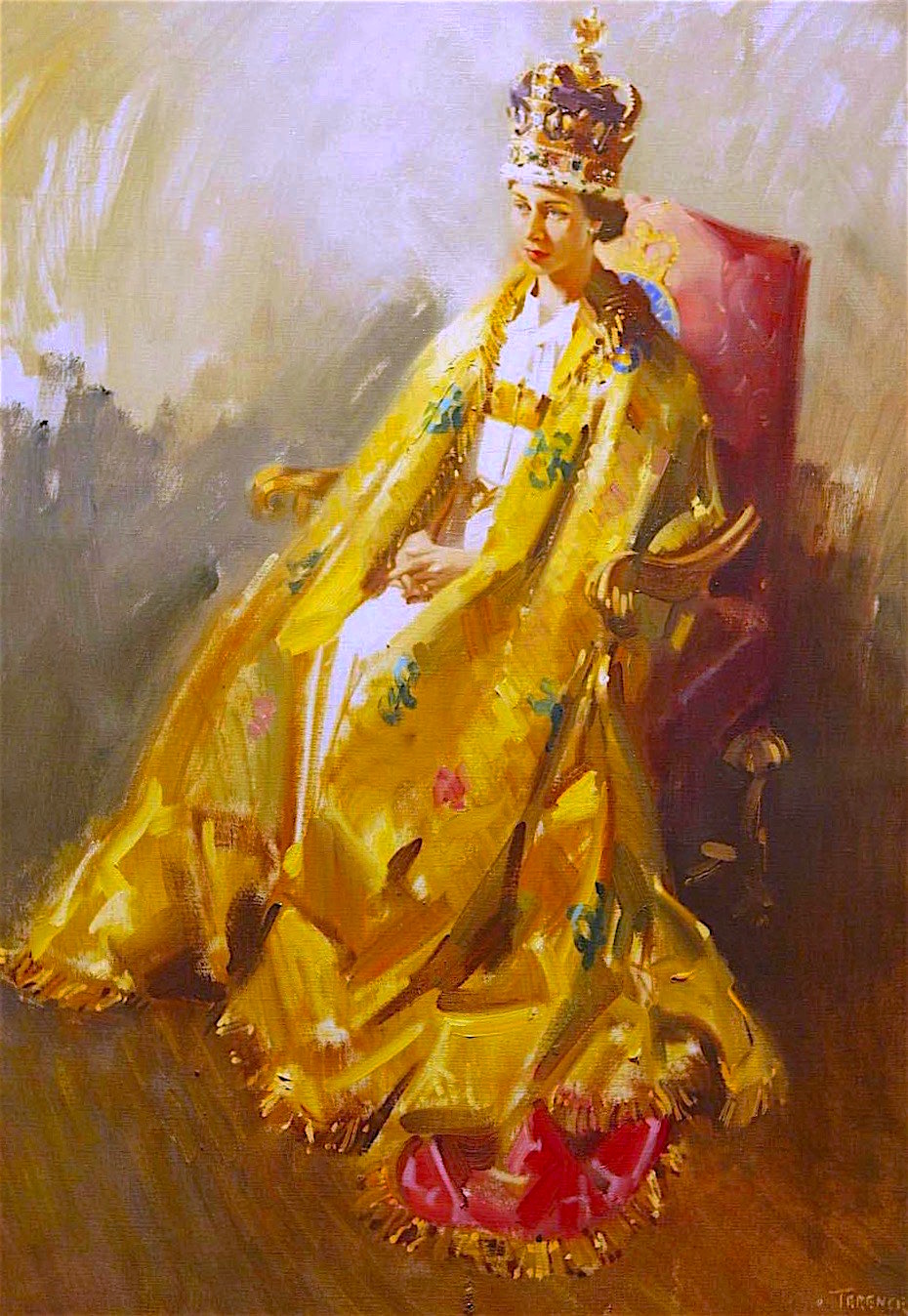 Coronation portrait of Queen Elizabeth II, 1953. This image from the internet seems to be slightly cropped at the sides and bottom. 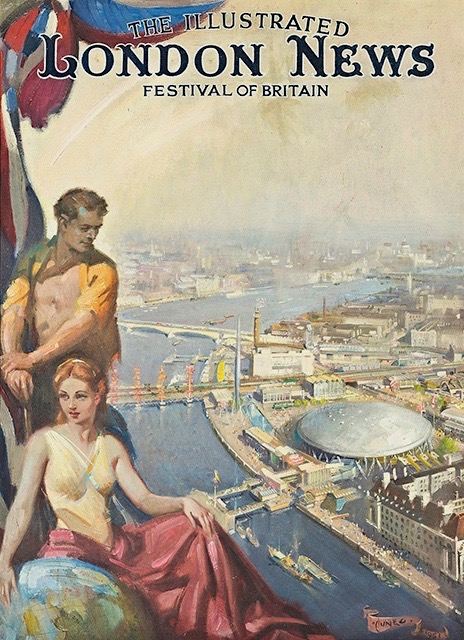 The Festival of Britain was an exposition held in 1951, and The Illustrated London News was a major publication at the time. Note Cuneo's signature in the pennant at the lower right. London fans will note that the Festival grounds are between the County Hall building and the power station that is now the Tate Modern art gallery. The large, flat-domed building is inland from the location of the present London Eye ferris wheel. This illustration combines architecture and human figures, the latter painted in part with flat brush strokes, something we will also see below. 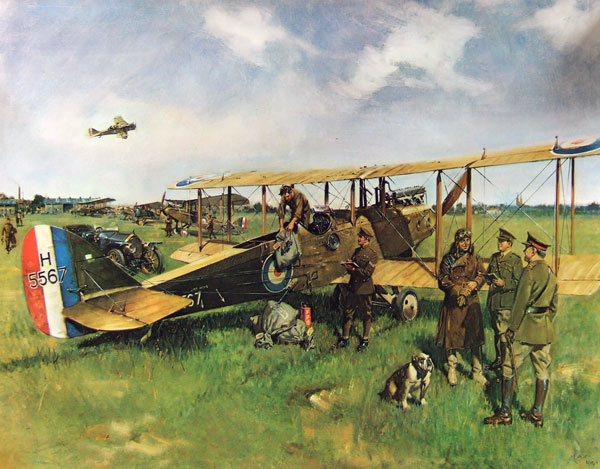 "The First Air Post" painted in 1978 shows that Cuneo was comfortable dealing with aircraft. 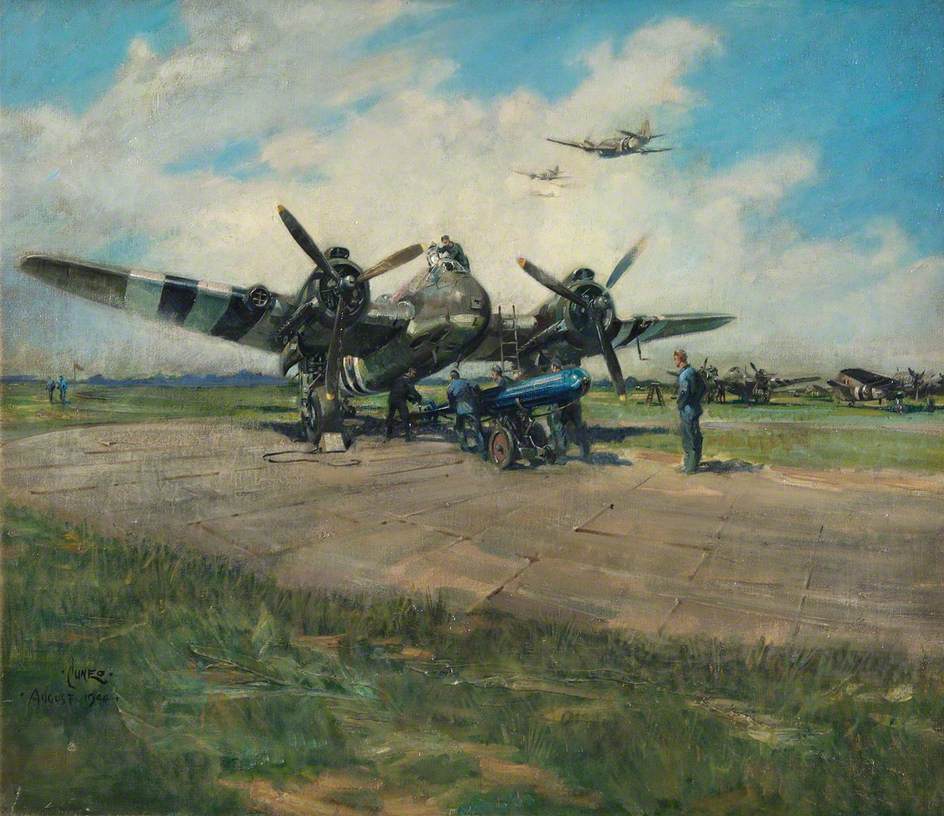 This is a Bristol Beaufighter having a torpedo loaded. I consider Cuneo generally better than Frank Wootton when depicting aircraft, and Wootton was hardly a slouch (though he could be sloppy getting correct proportions). 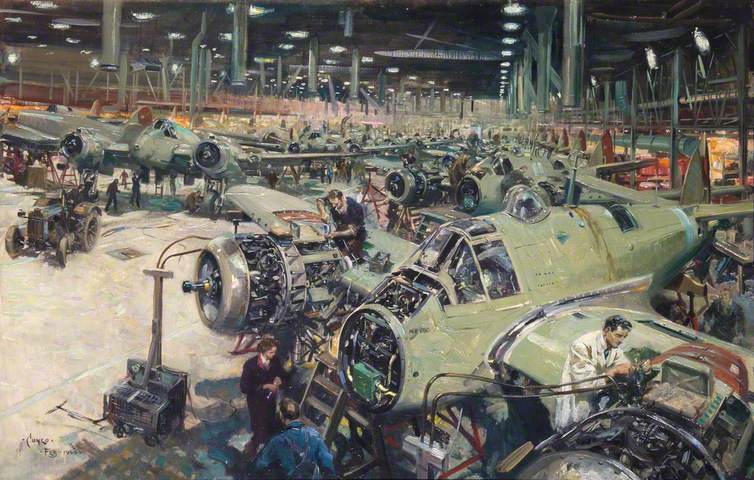 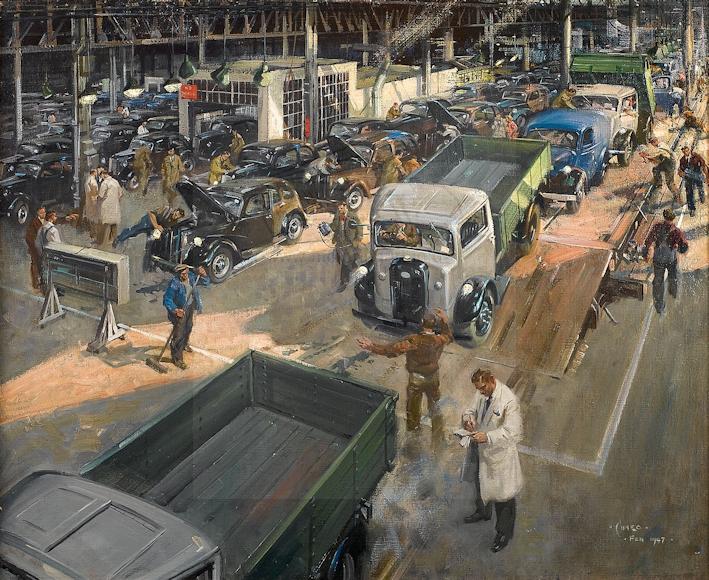 Another assembly line painting (and he did at least one other!), this of Ford in 1947. 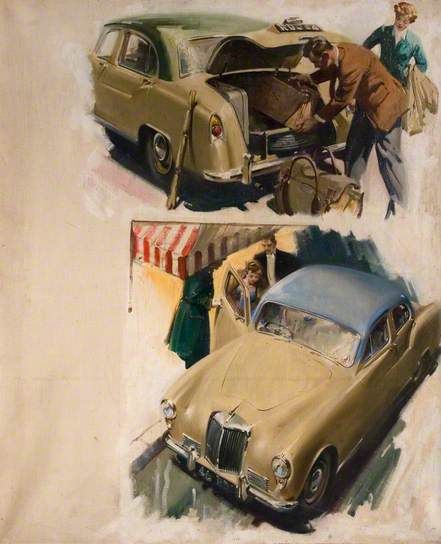 Probably brochure illustrations for the Armstrong Siddeley Sapphire 234 or 236, painted 1955 or thereabouts. Cuneo was good at cars. 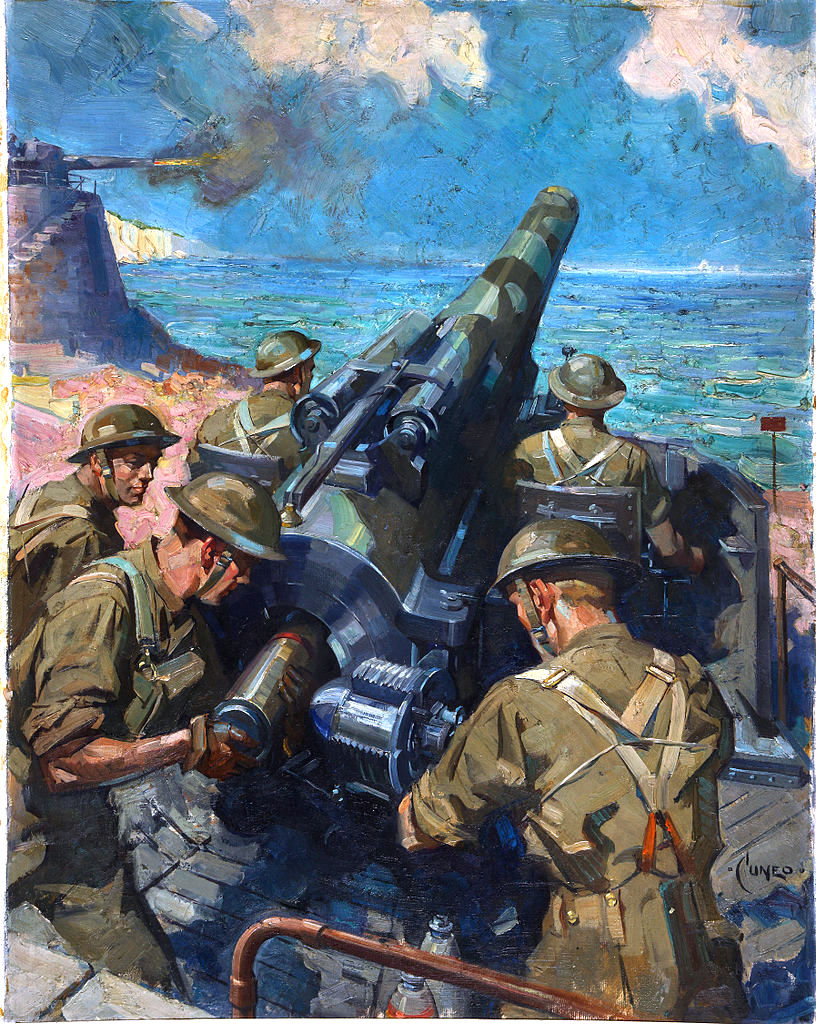 Coastal battery scene. I don't know when this was painted, but the period it depicts is probably 1940 when the British were preparing to repel a possible German invasion. 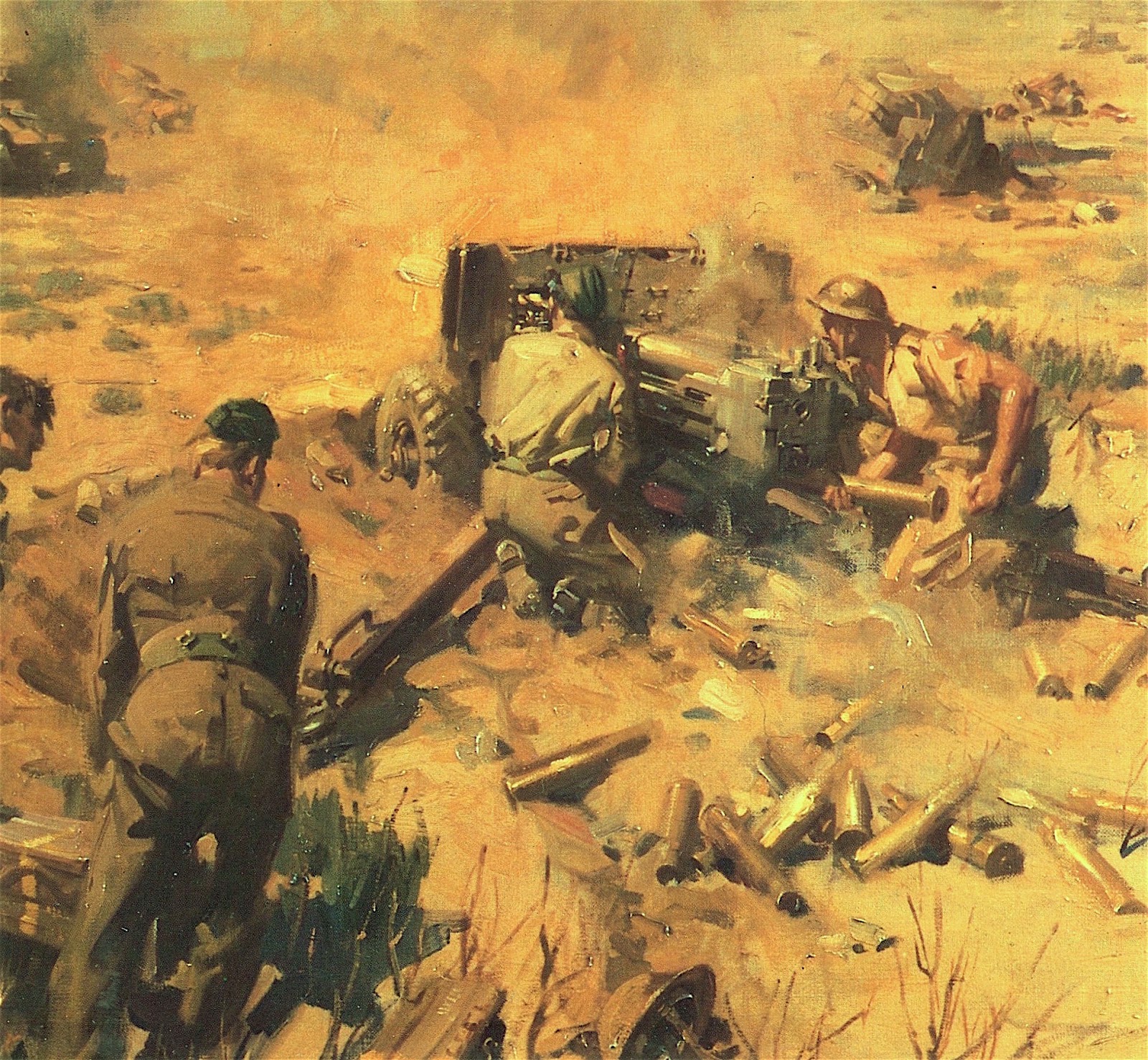 Detail of a painting showing the Kidney Ridge or Snipe Action in North Africa. Note Cuneo's brushwork: simple, but quite effective.
Posted by Donald Pittenger at 1:00 AM