Whistler at the Frick

For example, it holds nearly ten percent of all the known Vermeer paintings. Three, to be exact, two of which are very good and one so inferior that I wonder if it was actually done by that great artist. (You can find links to the Frick's works by name of artist here).

Much of the collection was acquired during the lifetime of Henry Clay Frick (1849-1919) and the New York museum at his Fifth Avenue mansion was established in 1935 following the death of his widow.

I've been meaning to visit the Frick for some time. I was first there many decades ago, before my knowledge of art history was great enough to appreciate what I was seeing. More recently, I planned to visit, but instead spent far more time in the Metropolitan Museum of Art than expected, so never got to the Frick that day. While visiting New York last September I finally did return to the Frick. The only downside was that photography was prohibited.

Two of the many works that interested me were portraits of women painted nearly ten years apart but in a similar spirit by James Abbott McNeill Whistler (1834-1903) ... Wikipedia biography here. As was his slightly pretentious (in my feeble judgment) wont, Whistler's primary titles of these portraits named the theme he was dealing with, rather than the actual subject. 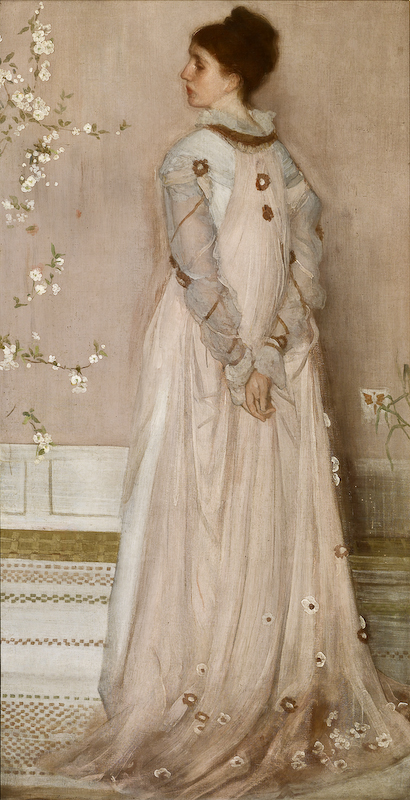 "Symphony in Flesh Colour and Pink: Portrait of Mrs Frances Leyland" - 1871-74
The Frick's webpage for this painting (acquired 1916) is here. Image copyrighted by the Frick.

I like the MoMA very much but have never been to the Frick. Guess that's next on my list.