Atypical Winterhalter at the Getty

The subject painting for this post isn't an early one, because Franz Xaver Winterhalter (1805-1873) was about 38 years old when he painted it. But it (and one other of the same subject) has a different feeling that those made before and after.

The painting is "Portrait of Leonilla, Princess of Sayn-Wittgenstein-Sayn" (1843), described here on the J. Gaul Getty Museum web site.

And here is Winterhalter's Wikipedia entry. It mentions that he made a highly successful career as a court portraitist. One result, according to the entry, was that his work is difficult to categorize in terms of the various movements of his day. Another is that he was looked down upon by other artists.

Setting that aside, let's turn to Leonilla's portrait and a few other Winterhalters to provide context. Included are two photos I took in April at the Getty that you might want to click on to enlarge. 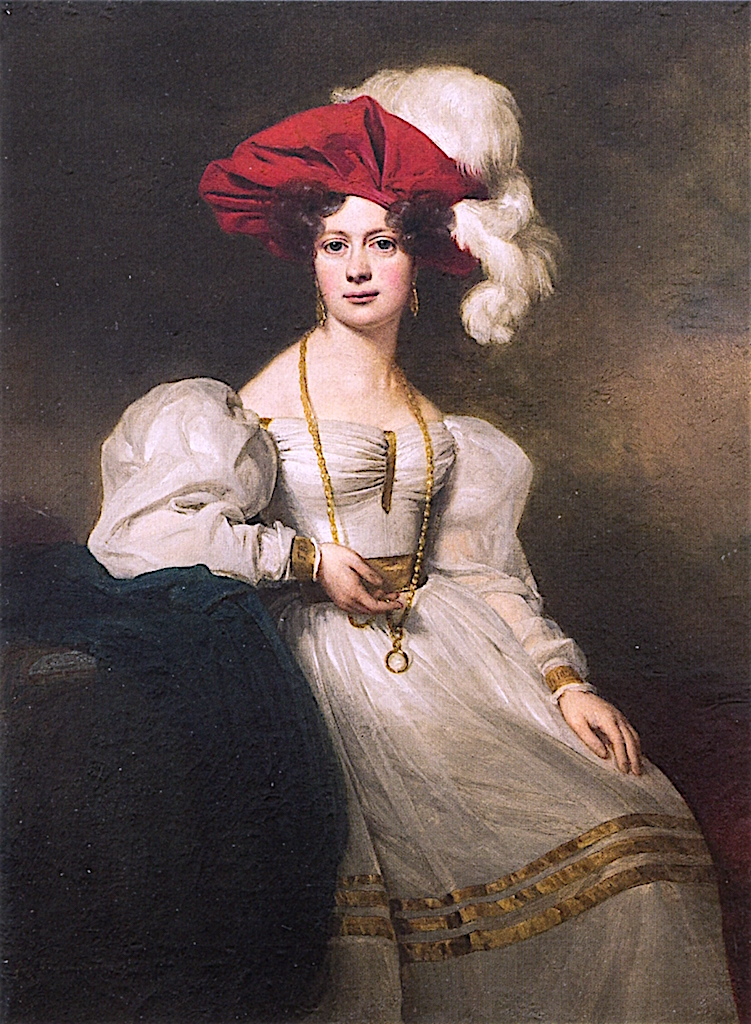 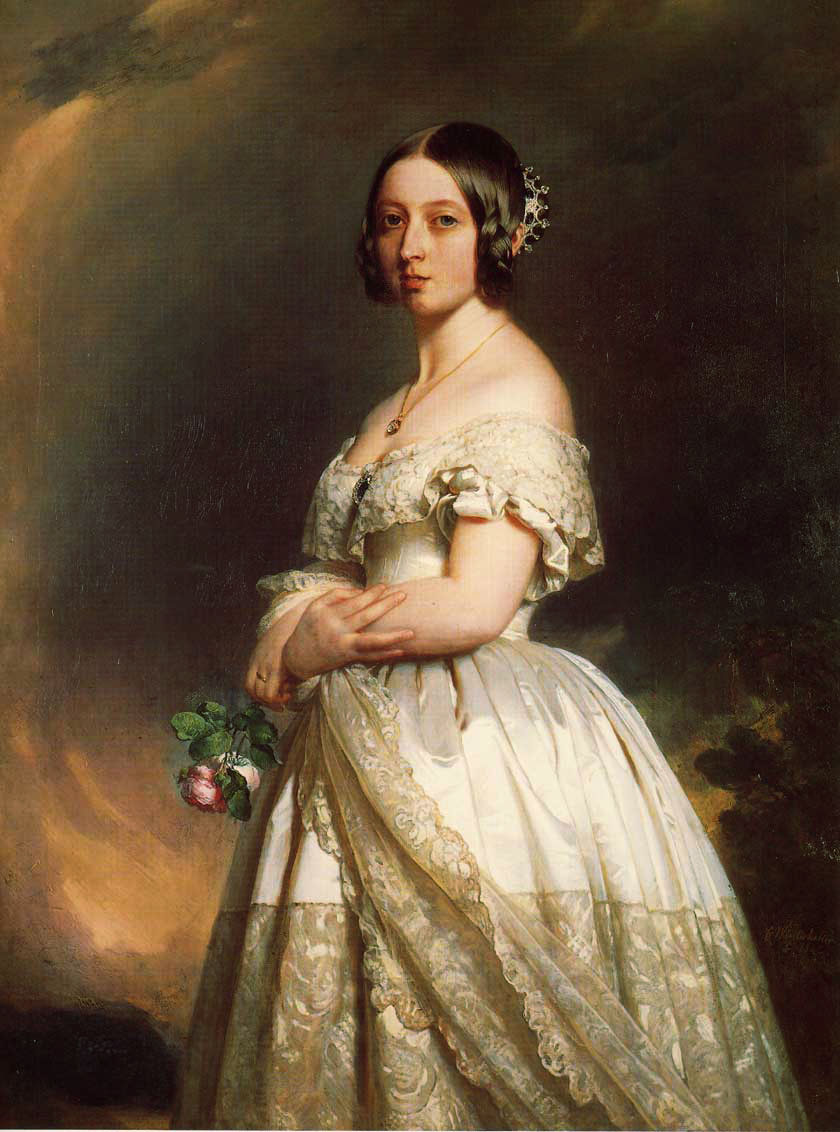 Queen Victoria - 1842
Painted a year before our subject painting. 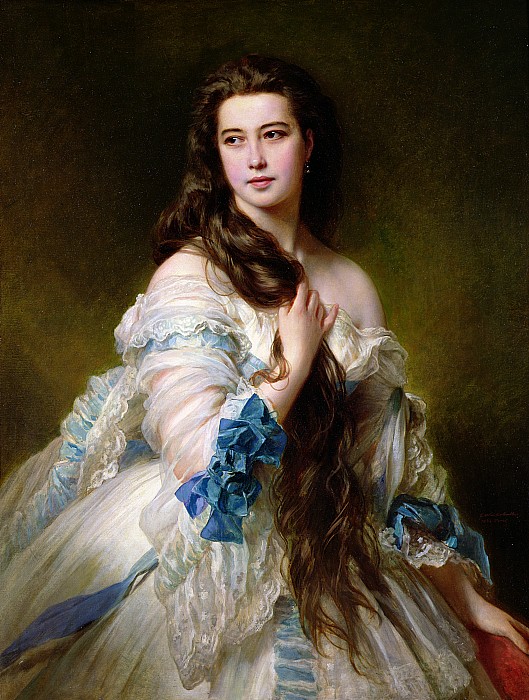 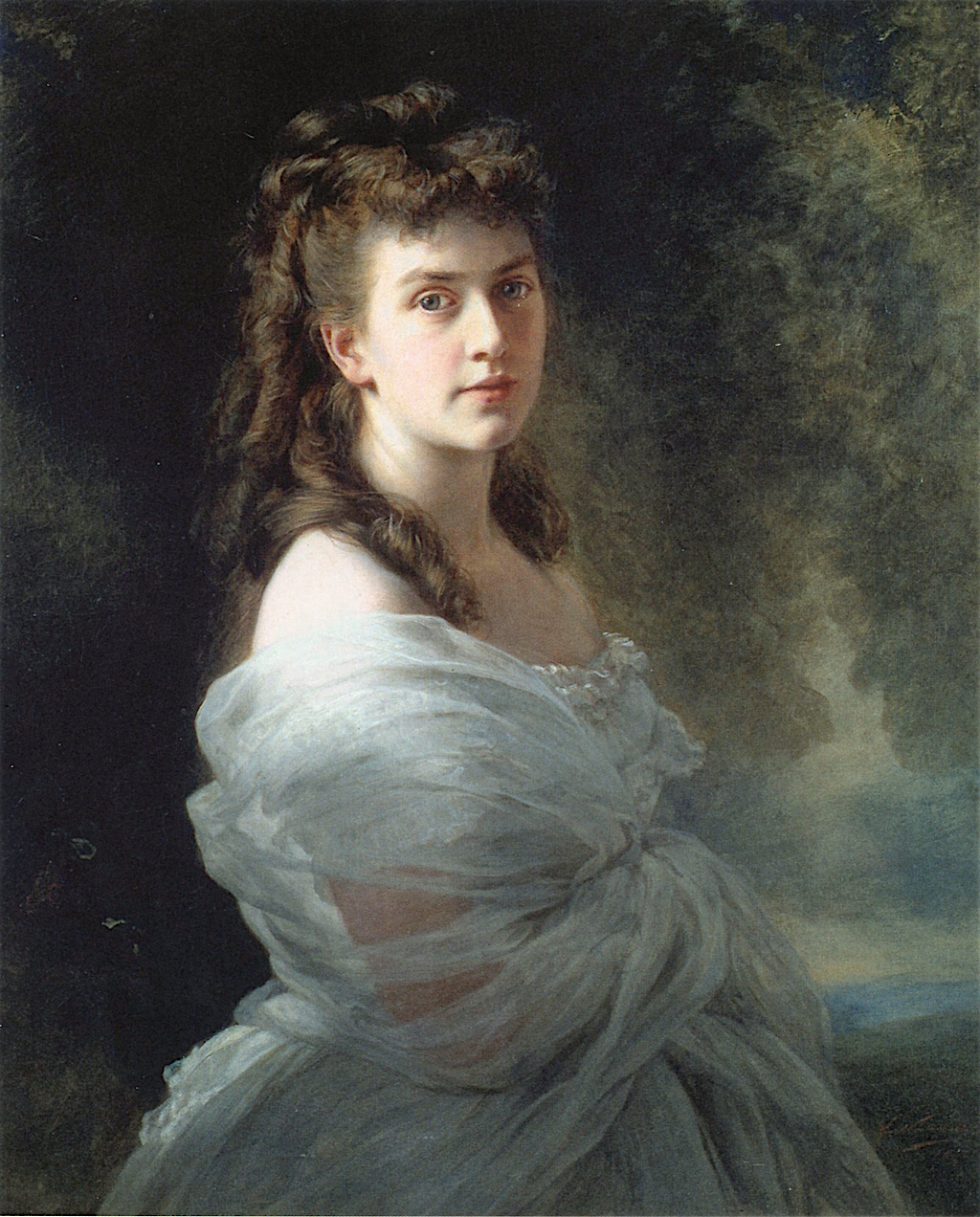 Sascha von Metzler - 1872
One of his last paintings. 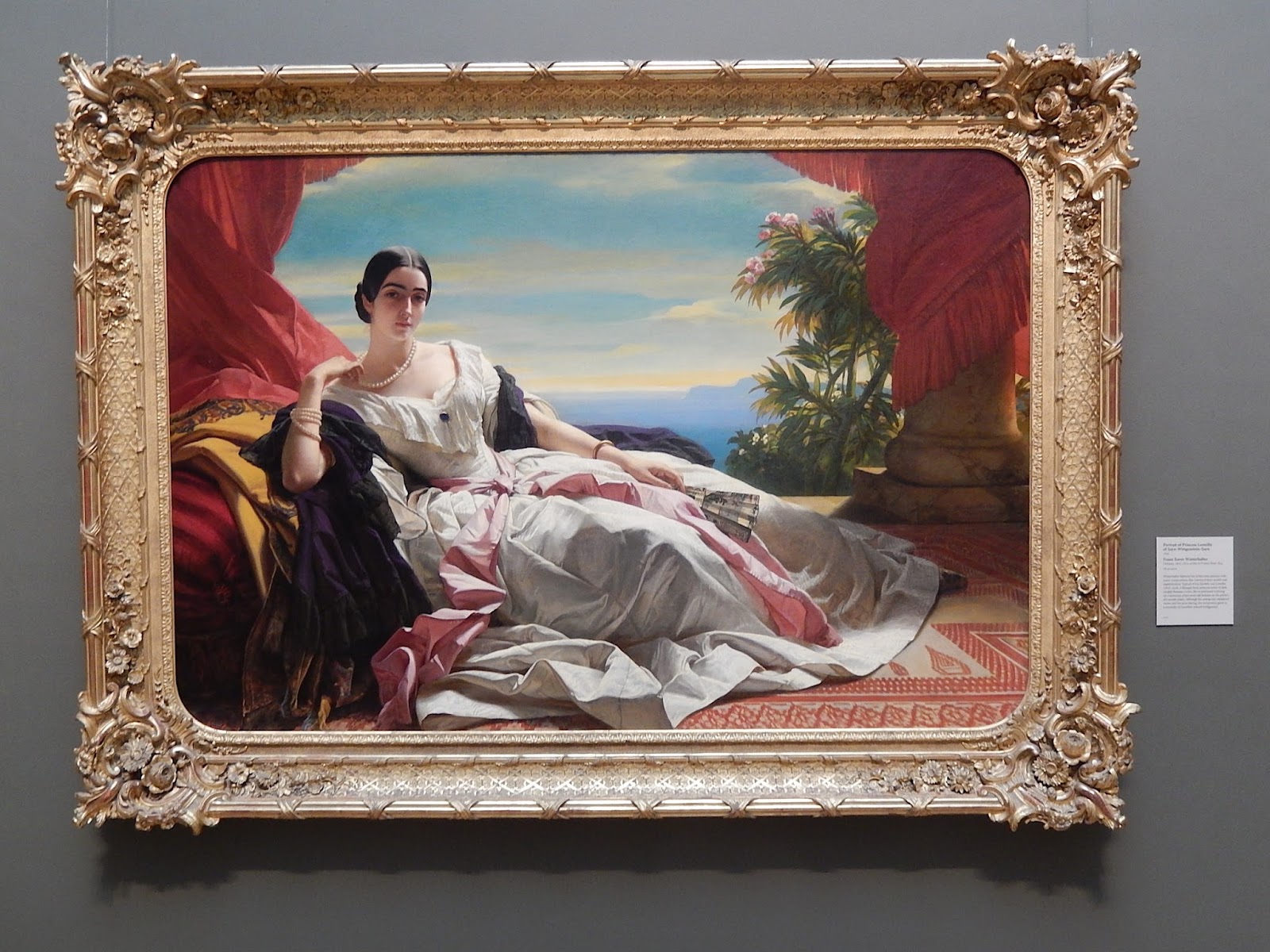 Leonilla, Princess of Sayn-Wittgenstein-Sayn - 1843
The subject painting as seen by my camera at the Getty. 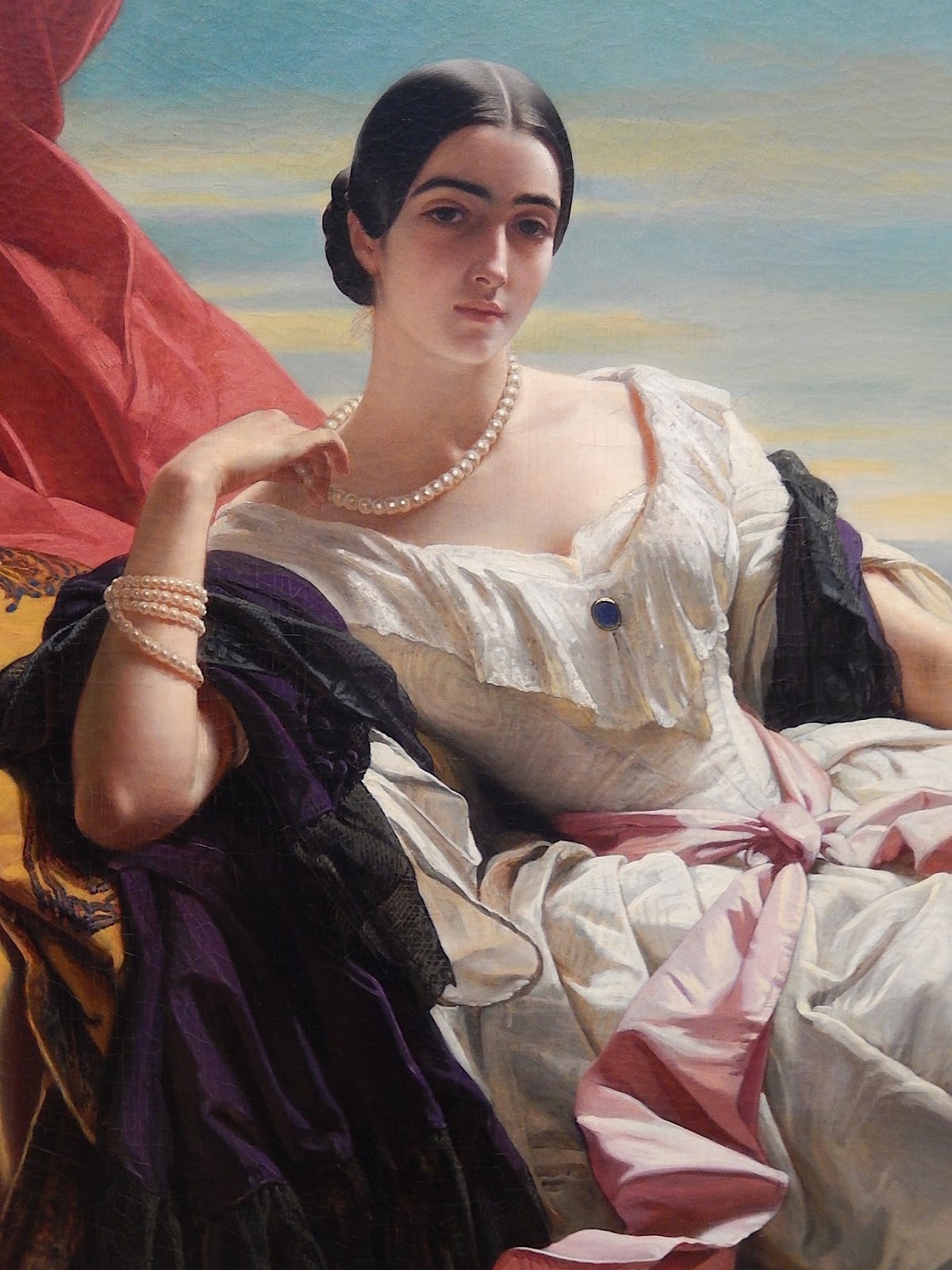 Closer photo.  Unlike the other examples of Winterhalter's work, this painting is hard-edge with slightly simplified forms hinting at the Art Deco / Moderne style of around 1930. His subject does not quite seem real. 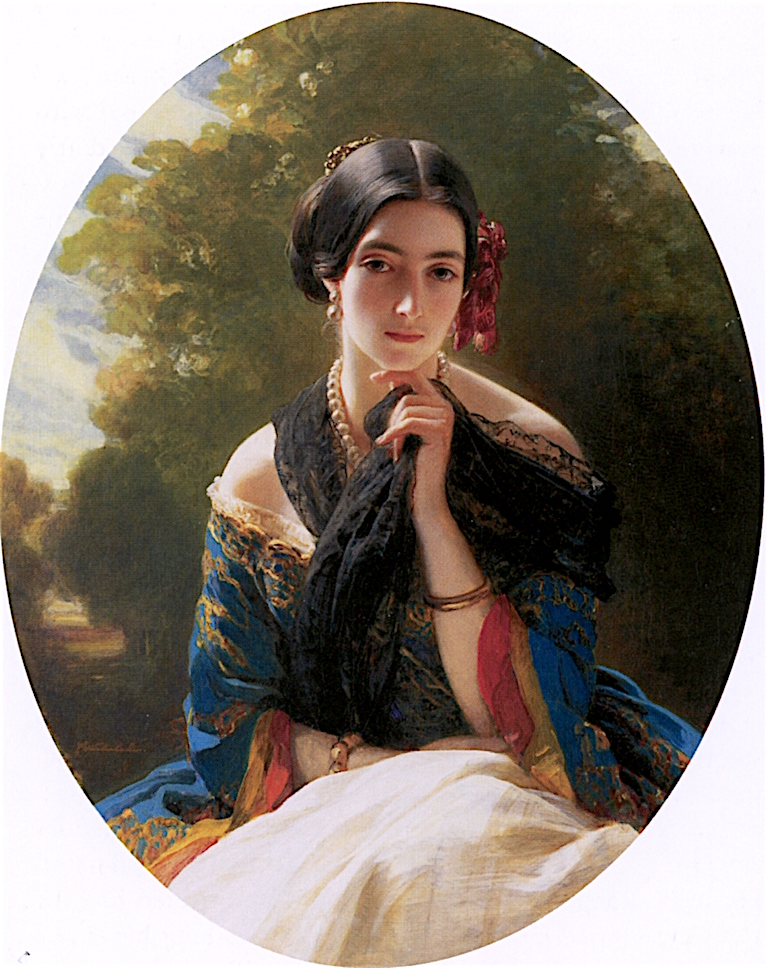 Princess Leonilla of Sayn-Wittgenstein-Sayn - 1840s
I found this image on the Web. It was dated vaguely as being from the 1840s, but appears to have been made about the same time as our subject. It, too, has the same stylistic spirit. However, the Wikipedia entry on Leonilla has it that its date was around 1836 and painted in Italy along with a portrait of her husband (that I could not find via a Google search). I'm doubtful regarding this claim, given the similarity in painting style and her hair style in both paintings, but could easily be mistaken. Also, I could find no photos of her in a brief Google search, so can offer no other evidence of Leonilla's appearance. She lived to be 101, by the way.

The only Winterhalter I know well (and enjoy) is the portrait of Queen Victoria, painted in 1842. The other artists might have looked down on Winterhalter, but since he was enjoying a highly successful career in the royal courts of Europe, he must have been doing very well indeed.