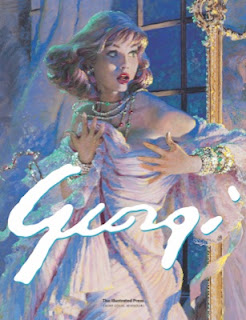 Edwin Georgi (1896-1964) is the subject of a fine new book crammed with his illustrations. I wrote about Georgi's early illustration years here. For more information about the book, you can click here.

One thing that struck me was how limited the biographical part was. For example, no date of death was mentioned. And the text was the same or nearly that of an article in Illustration Magazine's issue No. 30 (Summer, 2010) written by its editor/publisher Dan Zimmer, who also authored the new book. I then grabbed my copy of Masters of American Illustration: 41 Illustrators and How They Worked to see how it treated Georgi. Again, not a lot was said. A brief Google search turned up next to nothing new.

What is reported regarding Georgi is interesting. He attended Princeton and was on the Tigers' football team. When the USA entered the Great War, he became an Army pilot. Like many, he was shot down in those pre-parachute times, but survived the crash only to be hospitalized for a year. He became an illustrator in the 1920s and had a very successful career into the early 1960s. At some unstated point he married and then had children. He owned several houses and continued to fly. And that was about all important biographical information about him that I've been able to find. Zimmer did have contact with family members, but little information about his career and artistic methods seems to have come from them.

So, what to make of this? Maybe Georgi was a very private man. Another possibility, given the large amount of work included in the book, is that he spent much of his time laboring to hit his deadlines and spent the rest of his time as a normal, upper-middle class American in the 1940s and 50s.
Posted by Donald Pittenger at 1:00 AM

I knew him and his family personally. They were not particularly outgoing, which was odd given his own rather expansive, extroverted personality. I am not surprised Mr. Zimmer got very little out of them.