The typical stoplight or traffic light or traffic signal (these are alternative names for the same thing) has three lenses of different color. The one at the top in a vertically-oriented unit shines red when lighted. Below that is an orange light, and the one at the bottom signals in green. For more information that you will likely want or need, link to this Wikipedia entry.

But there was a time when stoplights were binary -- only red and green lenses were mounted. I remember seeing them here in Seattle when I was very young. Don't believe me? Then take a look at this: 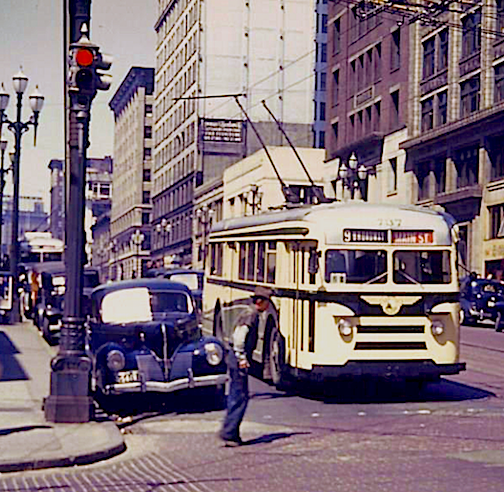 This fuzzy color photo taken in the summer of 1941 is of an intersection in downtown Seattle. Note the stoplight at the upper-left corner.

It can be pretty hairy driving along when all of a sudden that green light switches to red when you're driving 25 miles per hour and are less than 100 feet from the intersection. You have no choice but to continue on through, hoping that cars getting the green light don't immediately enter the intersection. How it probably worked was that when the signal changed from red to green, drivers would hesitate stepping on the accelerator, realizing that cars could still be approaching on the cross-street.

At the time I first became aware of stoplights, Seattle was transitioning from binary to the triple-lens variety, and binary lights were long gone by the time I learned to drive.

All-in-all, this is an instance of human factors being neglected in design work: The problem should have been recognized much earlier.
Posted by Donald Pittenger at 1:00 AM