The first, and perhaps the most famous, science-fiction comic strip was Buck Rogers which debuted in January 1929. Others of that genre followed, the best-known of these was Flash Gordon which featured the highest quality artwork of the lot, certainly in its earliest years when Alex Raymond wielded his pen and brush.

The only other American sci-fi strip with top-notch artwork that I'm aware of off-hand was Twin Earths (1952-1963), created by publications maestro Oskar Lebeck (1903-1966), who did the writing in the early years and Alden McWilliams (1916-1993), who did the art. I will probably write more about McWilliams in another post, but shall focus on Twin Earths here.

The concept of Twin Earths was that there existed a totally Earth-like planet that shared Earth's orbit but at exactly the opposite side -- 180 degrees away. This meant that, as of 1952 when the strip started, there was no way we on Earth could detect Terra, as it was called. Terrans were a few hundred years ahead of Earth technologically, so could visit here using their flying saucer spacecraft. Another quirk was that their population was 90 percent female. Yet another was that they had lifespans exceeding 150 years, yet preserved youthful appearances over most of that time.

The opening few months of panels can be found here. A Terran female agent reveals her identity to an FBI agent, the male hero of the strip. Then things flow from there.

The Seattle Times newspaper suffered a strike in 1953, and when it ended the paper published special sections displaying all the comics that would have been printed during the time of the strike. I recently made scans of these for Twin Earths, and two of these are displayed below. At this point in the strip's development, the plotting wasn't very interesting. Mostly it was presenting the futuristic marvels of Terra, contrasting them with 1953 Earth. There was a bit of romance-related activity, but no space wars or bug-eyed monsters.

I'll comment further in the captions, but want to stress McWilliams' artwork. Grinding out comics panels day after day can make corner-cutting tempting. Yet McWilliams didn't seem to fall into that mode very often, maintaining a commendably even strain. 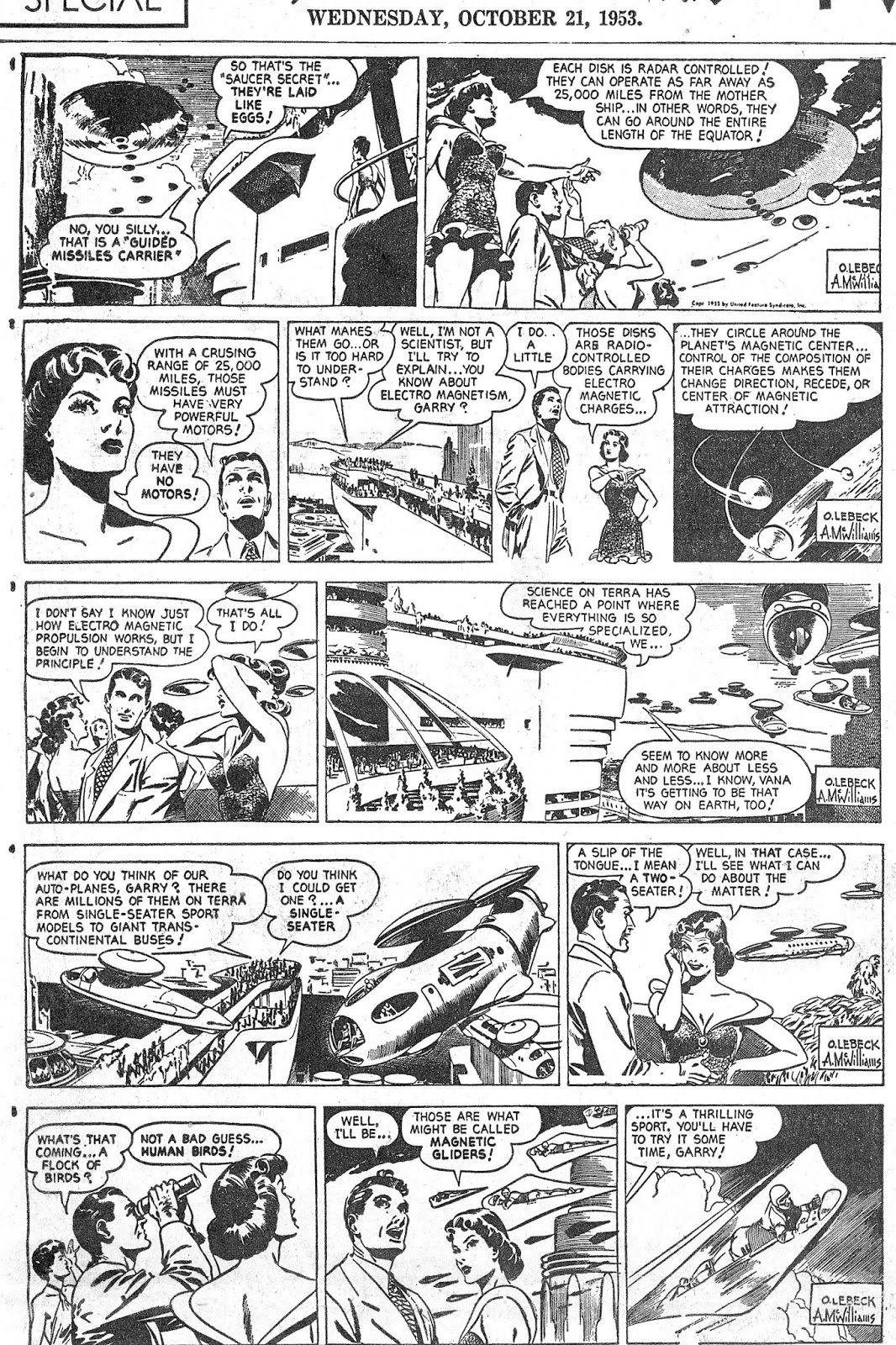 I don't think the dialog regarding electromagnetism set readers' hearts to beating faster. But Ah! the artwork. The compositional variety. The poses of the characters, the shifting points of view. And those seriously attractive women. McWilliams could do it all. 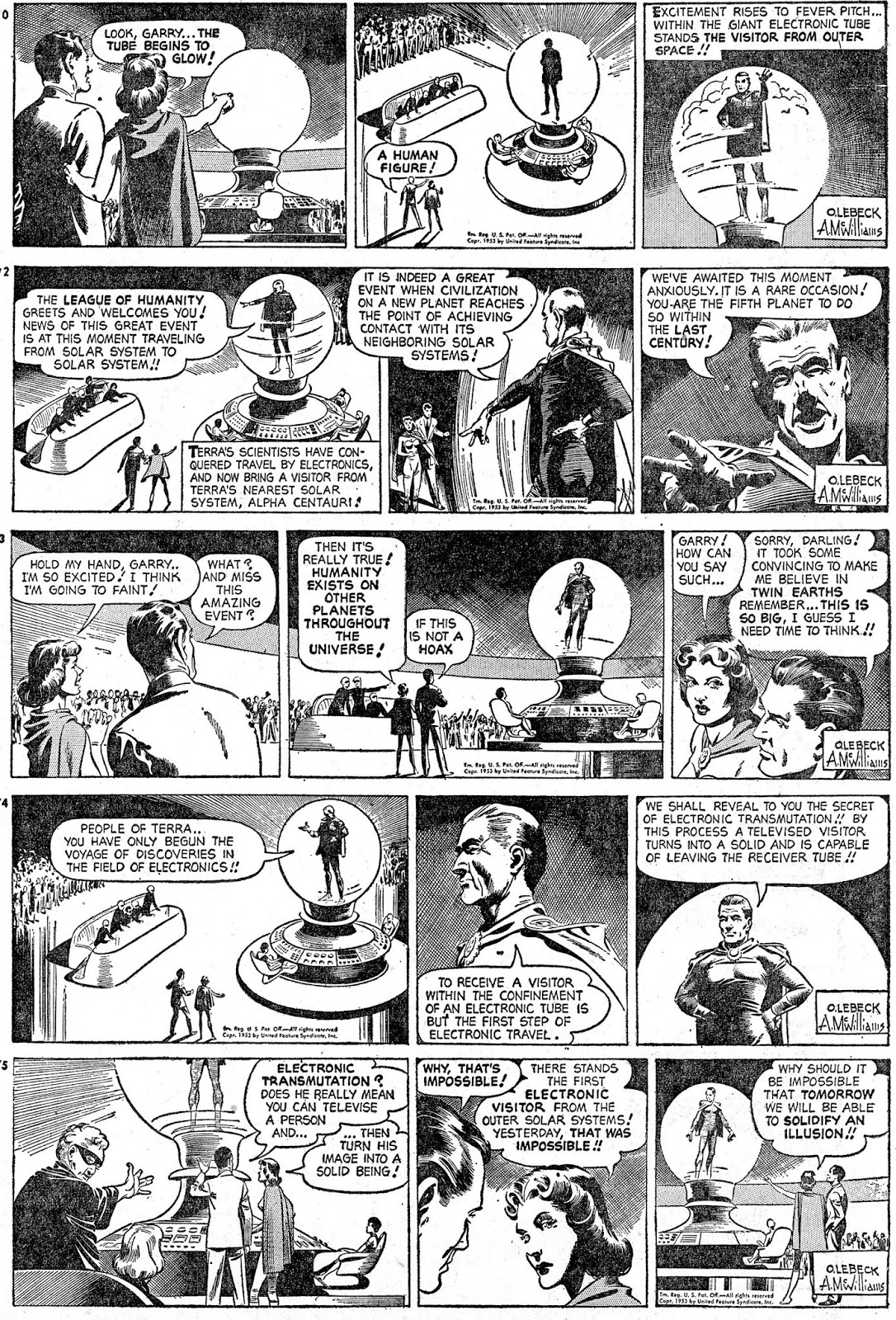 This set deals with Terra's contact with a planet from another solar system.
Posted by Donald Pittenger at 1:00 AM

Dear Mr Pittenger: I was pleased to find your website, praising the artwork of Alden McWilliams. I read "Twin Earths" as a boy while living in California (I have lived in New Zealand since 1971), and was so pleased to see the Susor reprints of both the Daily and Sunday Pages. Through Mr Susor, I was able to exchange a few letters with Alden McWilliams, and I sent a complete set of the covers of the Australian comic book reprints of Twin Earth (29 in all) to Mr McWilliams, who was amazed - he had no idea that both series were reprinted in Australia. I have had a life-long interest in the artwork of comic strips and comic books, and I have long thought that Alden McWilliams deserves more credit than he receives for his skilled and imaginative art. Many thanks for your article. Sincerely, David Lee-Smith, Lower Hutt, New Zealand

Unknown -- Thank you for your information. I hadn't known that Twin Earths had been reprinted in comic book form. I happen to have a couple Space Cadet comic books with his artwork, and might post about those before long.

Dear Mr Pittenger: Thank you for your email. You might be interested to know that "Twin Earths" was widely reprinted in comic book form in Britain (in the "Tarzan Weekly") and mainland Europe, and in newspapers in South America (I have a few strips in Spanish). McWilliams did change his style about half-way through the Dailies, drawing more in the fashion of Alex Raymond in "Rip Kirby." He also began to make some shortcuts, using the last panel of one strip as the first panel of the following strip. Personally, I prefer what I consider to be the "Golden" period of the "Twin Earths" Dailies, which ended with the death of the Terranian leader Granit on Venus. I would be pleased to see McWilliams' work on "Space Cadet." I also have some Gold Key 'Star Trek" comics with his artwork, as well as some other comics on which he worked. With good wishes, David Lee-Smith

David -- I just drafted a post with some scans I made from 2 Space Cadet comic books in my possession. Only a few pages so as to show McWilliams' technique in that setting. Will post it fairly soon.

Hello any Twin Earths fans out there...
Is that you, David L. S.?? It's been a long time. I'd love to get in touch.
I have also been a fan of the strip and worked closely with Bob Sussor on the reprints. I was a close friend of Mac (Al McWilliams) in his last years. Bob and I did an interview with him which I would love to get out there somehow.
In fact, we were together on his last birthday where he drew me what was probably his very last piece of art. It's in the McWilliams special issue that Sussor put out.
About a week ago I was able to find the last color Sunday that I was missing from my collection which I began in 1956. There is no one to brag about this so I found this blog in hopes to impress SOMEBODY (yeah, right!) with this 65 year quest of mine.
Actually, although I do have every Sunday in color for many papers across the states, I still have some only in third size and still need many in half size. And...Dave hint, hint, I still need 3 or 4 or the Australian comics.
Mac was the nicest guy I ever knew. I still miss him. I started writing a history of Twin Earths which would have been in the last issues that never came out. I have copies of the 4 gorgeously colored covers (1 Sundays, 3 Dailies) that Bob had created along with his proofs of all the strips never published by Sussor. Every strip from beginning to end. I believe Ruth McWilliams, Mac's wife had copyrighted them so I don't know if I can put any of this stuff up. I'm not sure even how to do it or where. After Mac had passed, I remained friends with Ruth for a few years, but eventually lost touch. She even let my family use their summer house on Cape Cod for my family’s vacation.
I was also friends with Mac’s good friend, Bob Jenny, a less famous artist who had great tales of working for DC and Dell. He was shown the first Superman page by, I guess one or both of the creators, and he told him/them he didn't like it and that it was too odd to last! I did an interview with him also on the same VHS tape. I would love to put this stuff up on YouTube if I knew how. Surely no copyright there.
I also have the full run of the daily in color as it appeared in the St Louis Post Dispatch. It ran on their full color daily comic page for about the first year and a half. Those are very strange to see as they had I Love Lucy, and about 20 other strips in color. I’ve got the full pages with Twin Earths cut out. On the reverse, there was another full page of comics (Mandrake, Rusty Riley, etc) in normal black and white. I think there was even another section in the Dispatch which had even more B/W strips! Comics-wise, that paper took all the honors it seems. I took some pictures of some of these T. E. strips and I’ll see if I can send them somewhere so that they can be seen. If there is any way someone can get in touch ( I hesitate to put my email out there), please do. I would love to share some of this stuff if possible.