Jeanne du Maurier (1911-1996) was an artist, a painter. But she is probably best-known as being the younger sister of the writer Daphne du Maurier. Jeanne and Daphne were daughters of the well-known (in his day) actor Sir Gerald du Maurier and actress Muriel Beaumont. Their grandfather was George du Maurier who worked at Punch magazine and wrote the novel "Trilby" that had the character Svengali.

Although there are printed biographies dealing with the three du Maurier sisters (the oldest was Angela, who also wrote), the main Internet source dealing with Jeanne is here. It states:

"She studied at the Central School of Art in Southampton Row, and was in the life class under Bernard MENINSKY. She also studied drypoint and etching there. After she attended the St. John's Wood School of Art (studying painting under P F Millard) her first studio was in Hampstead, and she began exhibiting in 1938 with the RBA [Royal Society of British Artists] and SWA [Society of Women Artists]. ...

"Her next exhibition [after World War 2] was with STISA [St Ives Society of Artists] in the Autumn of 1945, opened by her mother Lady du Maurier. She took a studio in St Ives and again exhibited in 1946 where she met Dod PROCTER who asked her if she could paint her portrait. The two became close friends, spending three winters together, two in Tenerife and one in Africa. By the time she exhibited at the RA [Royal Academy] in the 1950s, Jeanne had moved to Manaton in Devon. She painted mostly still life, flowers, landscapes and the occasional portrait. Among her works exhibited at the RA were flower paintings."

Hardly any images of her paintings can be found on the Internet, nearly all held by the Royal West of England Academy in Bristol. Worse, none are dated. This means I cannot place them in context of 20th century painting trends and fashions. I'll guess that the images below are of paintings made between 1950 and 1970. If any reader has better information, please post a comment. 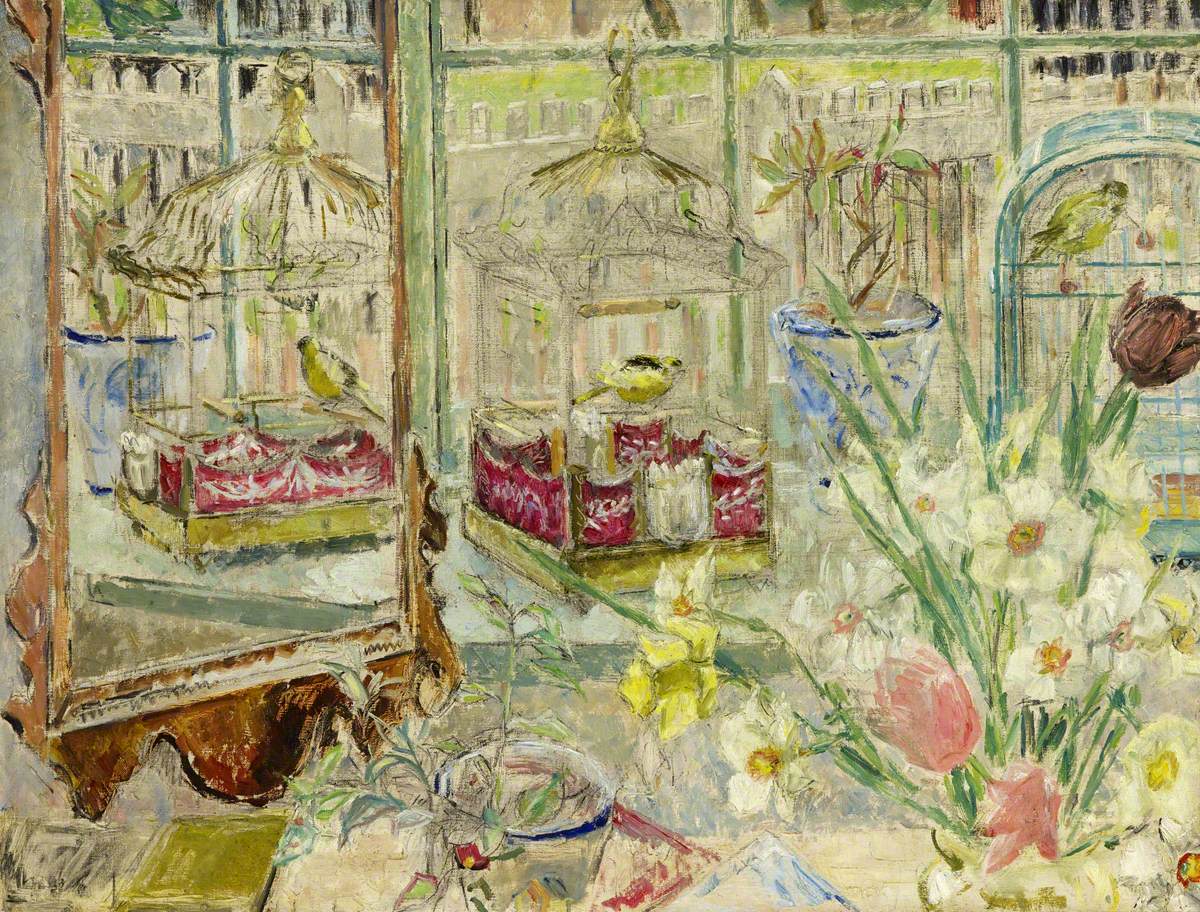 Birds and Flowers
This, and the painting below feature mirrors. 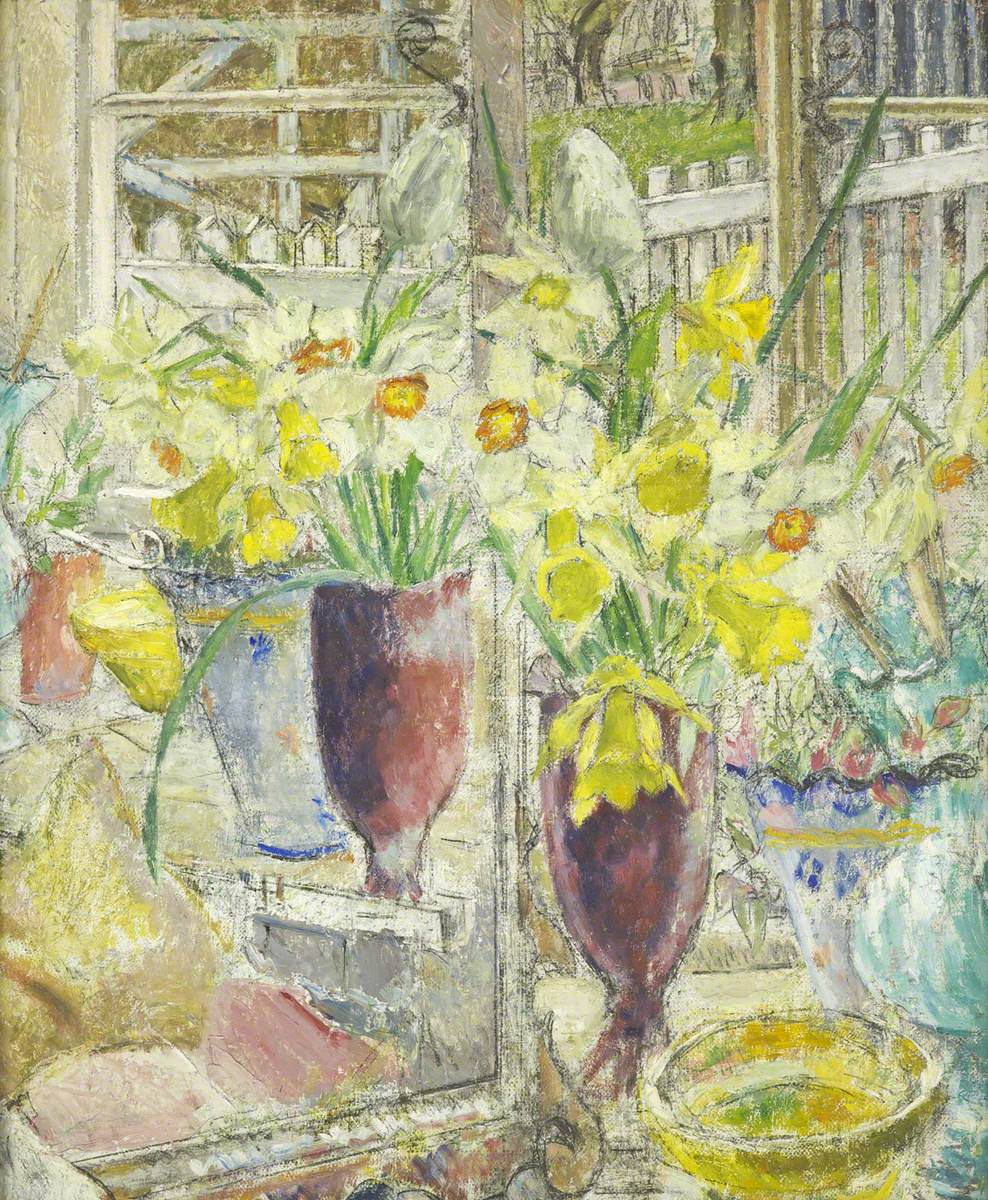 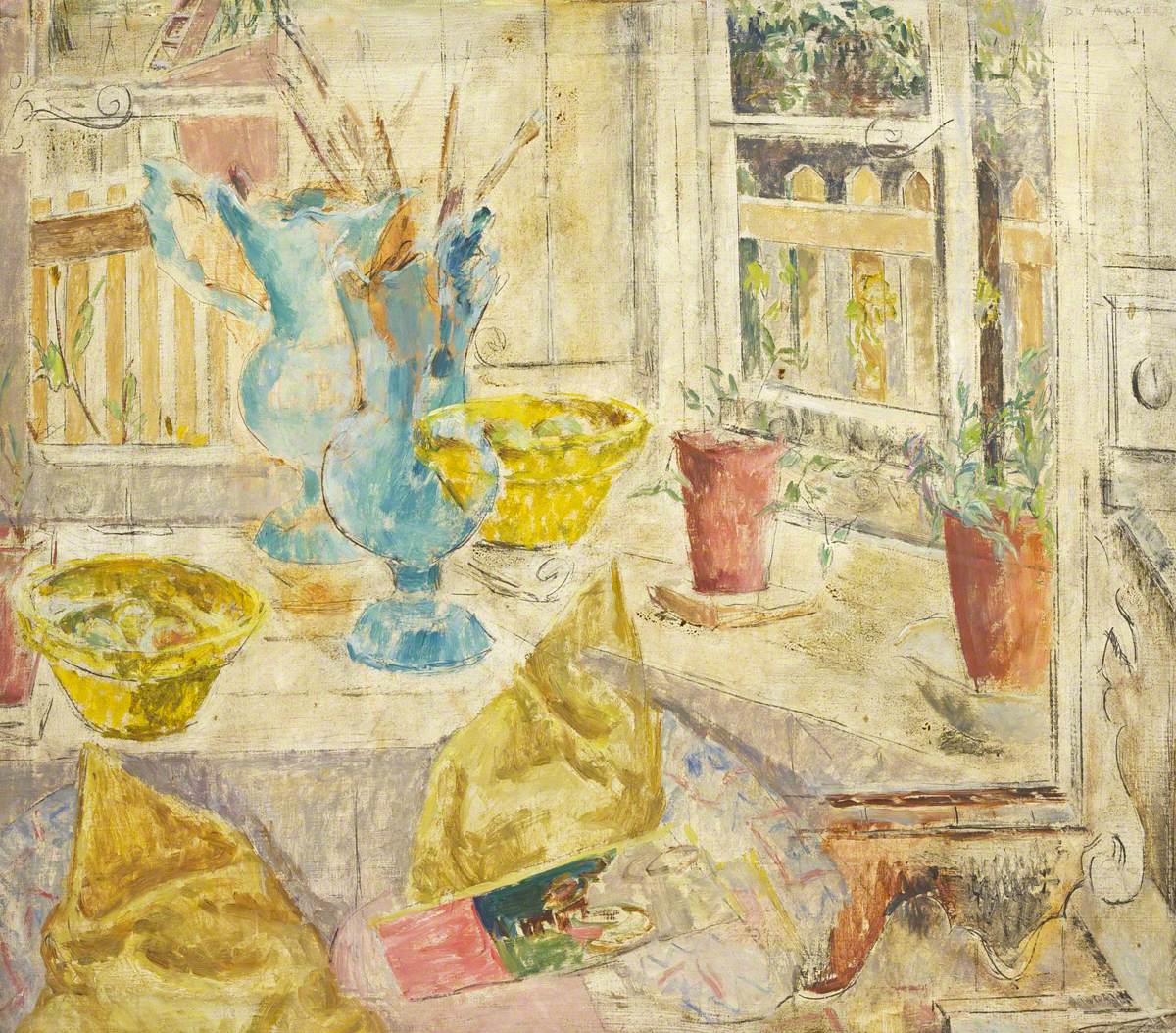 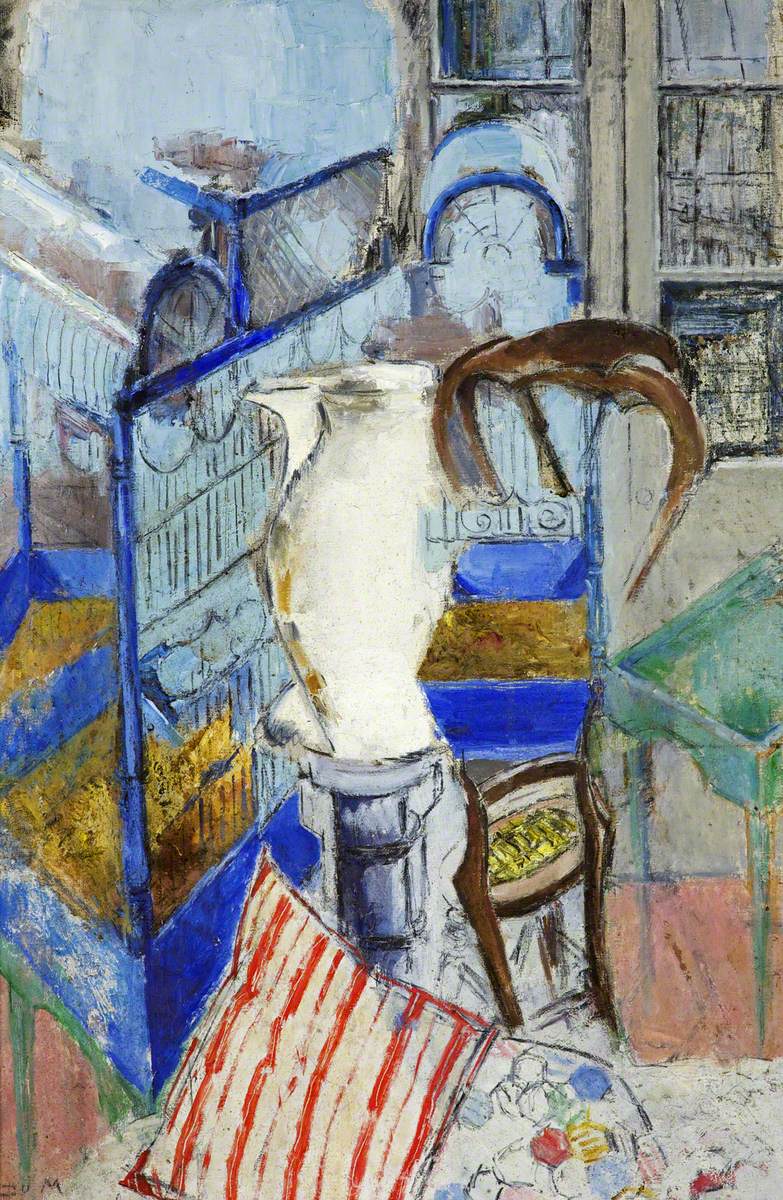 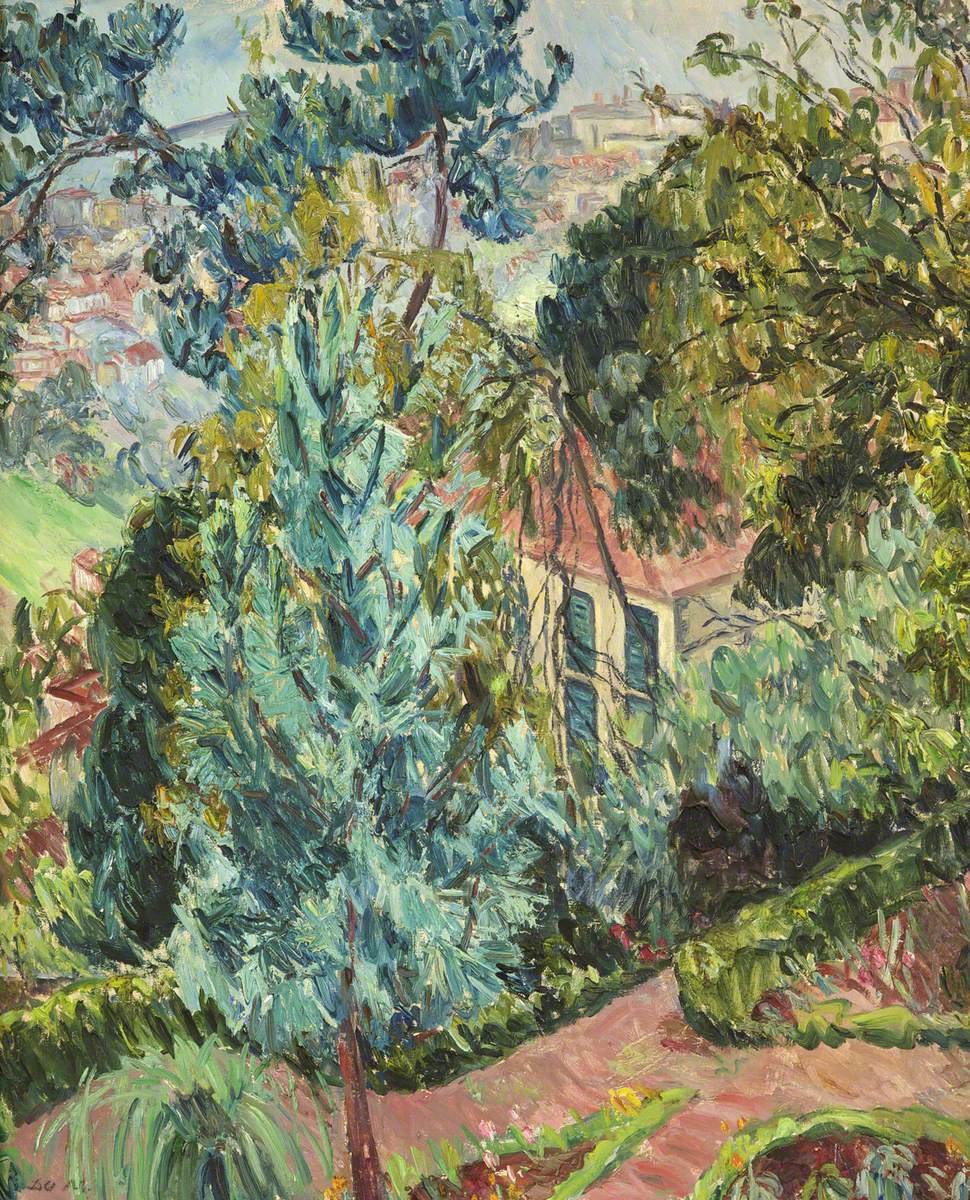 The House Next Door
Her treatment of foliage seems inspired by Cézanne. 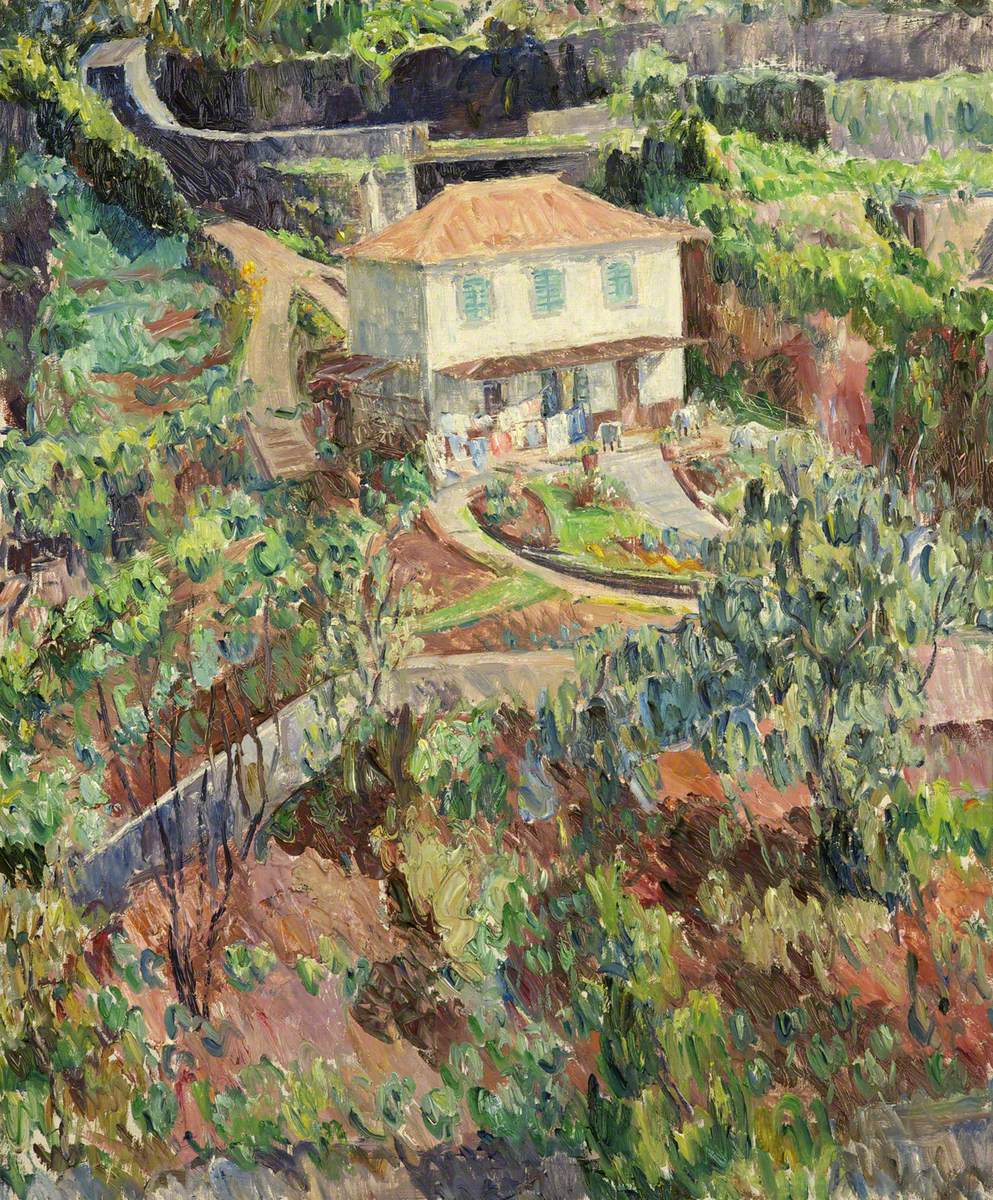 Your tastes might well differ from mine. And tiny images seen on computer screens seldom capture what one experiences when viewing paintings in person. That said, from my perspective Jeanne du Maurier was not a good artist. The paintings shown here (aside from The Bird Cage and The House in Madera) tend to be wispy and unfocused. Bird Cage seems unresolved, incomplete. The Madeira house painting is the most solid, yet it has those three blue patches representing upper-story windows and the roof without the correct shadow pattern that distract from the rest of the work. Based on these few examples, it puzzles me how she ever got paintings accepted by the Royal Academy. Could it have been her family connections?
Posted by Donald Pittenger at 1:00 AM