The Naval Art of Henry Reuterdahl

Henry Reuterdahl (1870-1925) was born in Sweden and moved to the United States in 1893. As his Wikipedia entry mentions, he lacked formal art training yet nevertheless had a successful career as an illustrator and painter of naval and marine subjects. More information about him is here.

His illustration and painting style tended towards a flashy, free form of impressionism with a touch of other modernist influences. Much of this seems to be for dramatic effect rather than careful documentation of events he witnessed such as the early stages of the 1907-08 around-the-world cruise of the Great White Fleet. 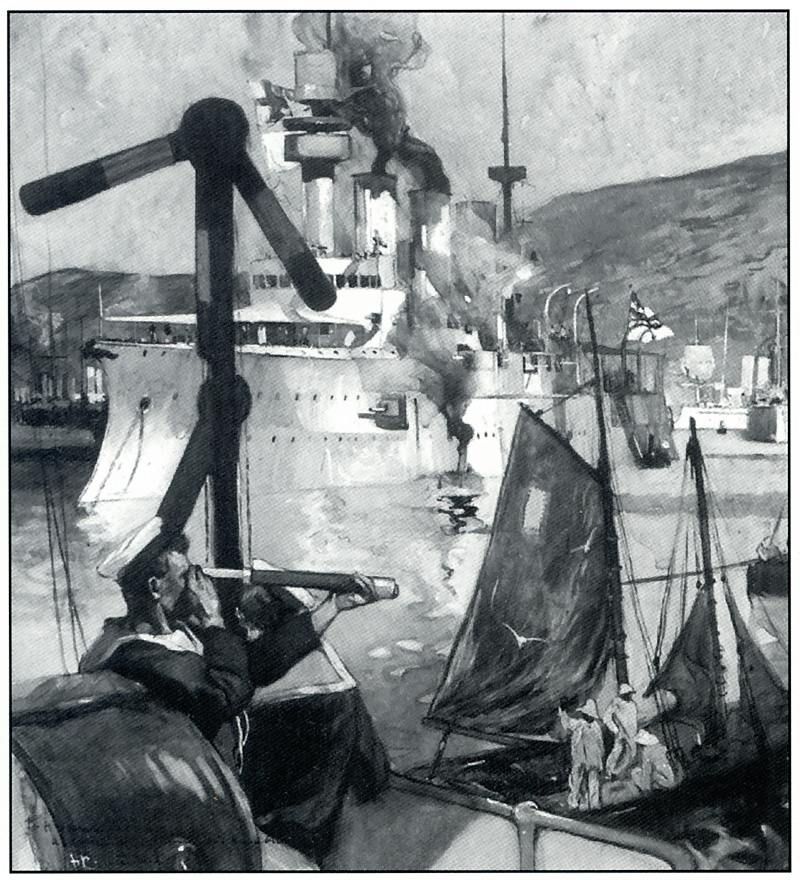 Illustration showing a U.S. battleship in a foreign harbor 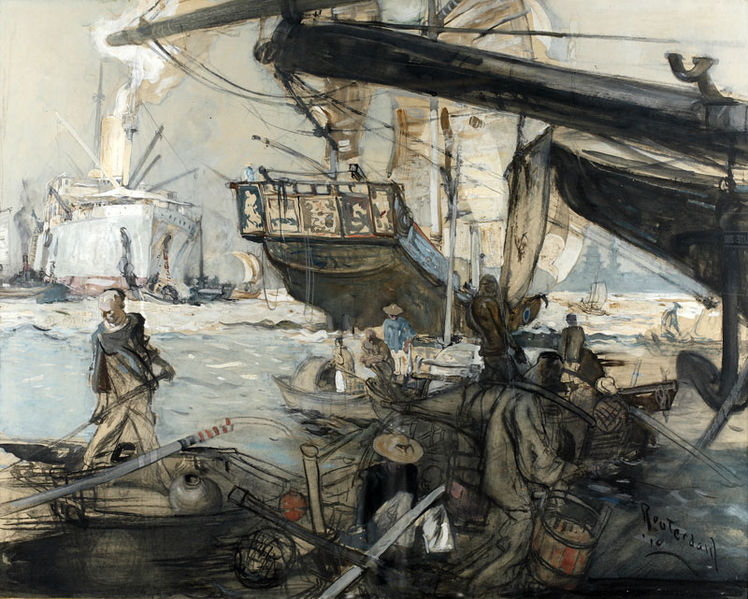 Strange Ships - 1910
One source has the date as 1918. However, this might be related to the previous one even though their settings differ (one has high hills in the background, the other does not). 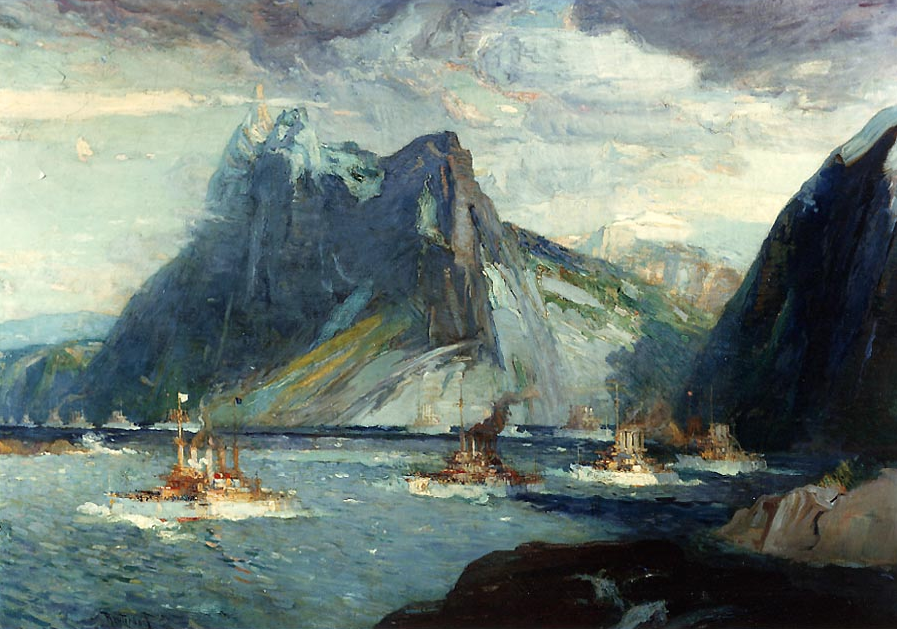 United States Fleet in the Straits of Magellan, February 1908
The around-the-world cruise: the sea is tranquil here. 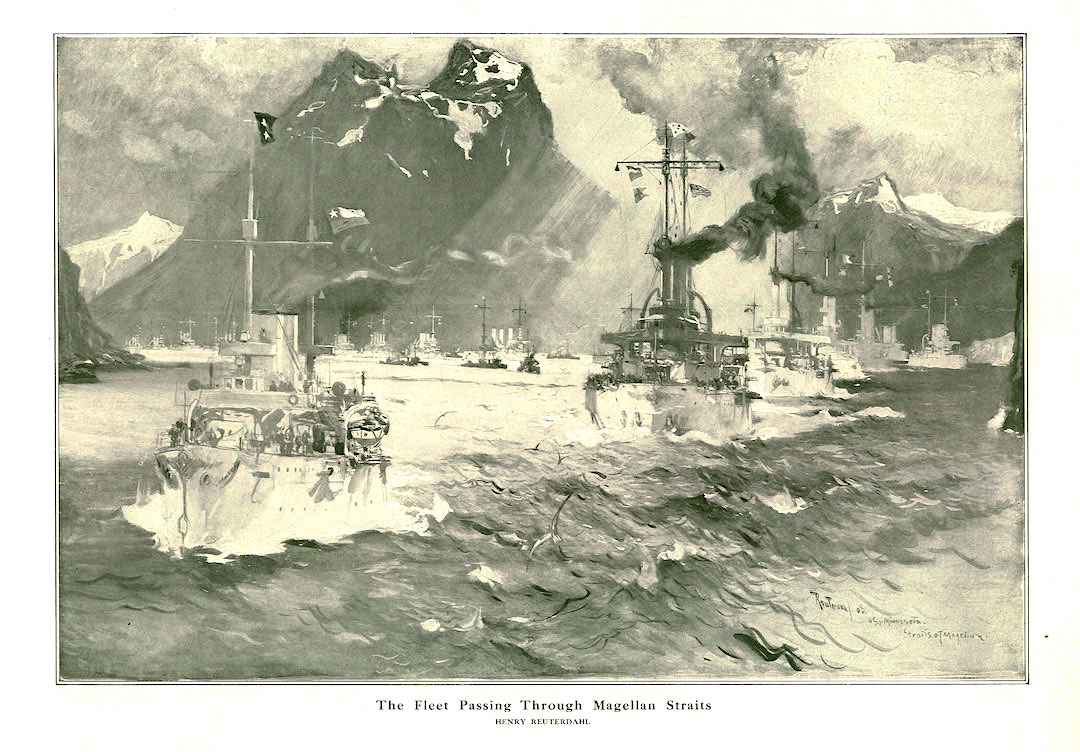 The Fleet Passing Through Magellan Straits
And here, at the same location, it seems less so, though this is more of a closeup view. The empty area at the lower right of this print where Reuterdahl signed it gives the impression that the sea is dropping downwards. 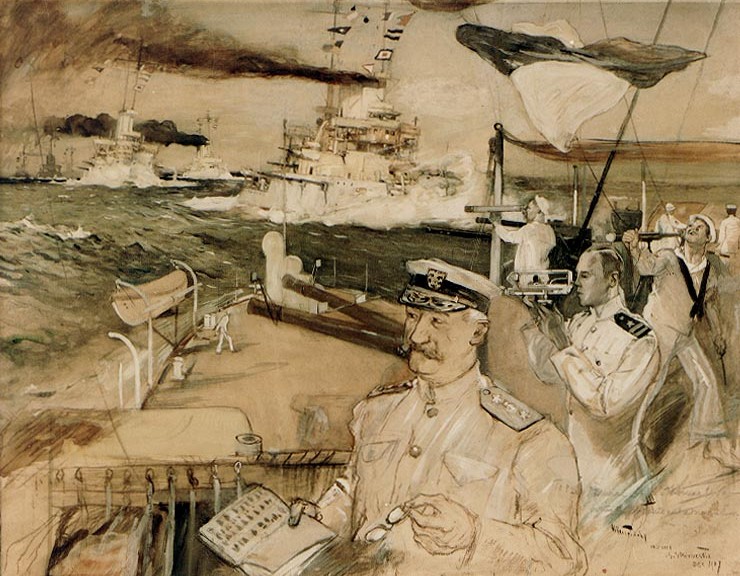 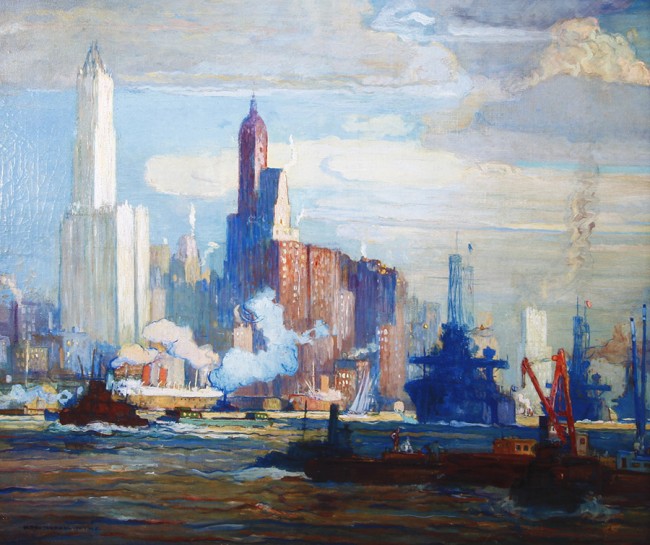 New York Harbor 1914 - H.S. Vanderbilt schooner Vagrant amidst commercial and military shipping
The white building is the Woolworth, the other tall one is the Singer Building: both are idealized, exaggerated. The point-of-view here is looking down the Hudson. 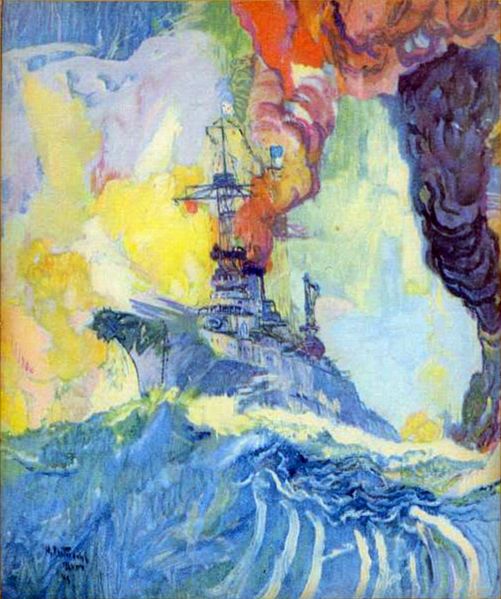 Naval Engagement - c. 1915, watercolor
This has a Fauvist feeling thanks to the exaggerated colors.  Again, the water appears to be falling off the frame. 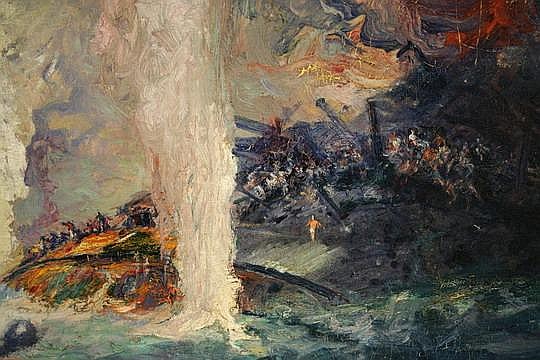 Sinking of the Battlecruiser Queen Mary at the Battle of Jutland, 31 May 1916
The Queen Mary suffered a magazine explosion, broke in half, and sank. Only 20 of her crew survived. One is shown here on the hull of the ship near the center of the paining. 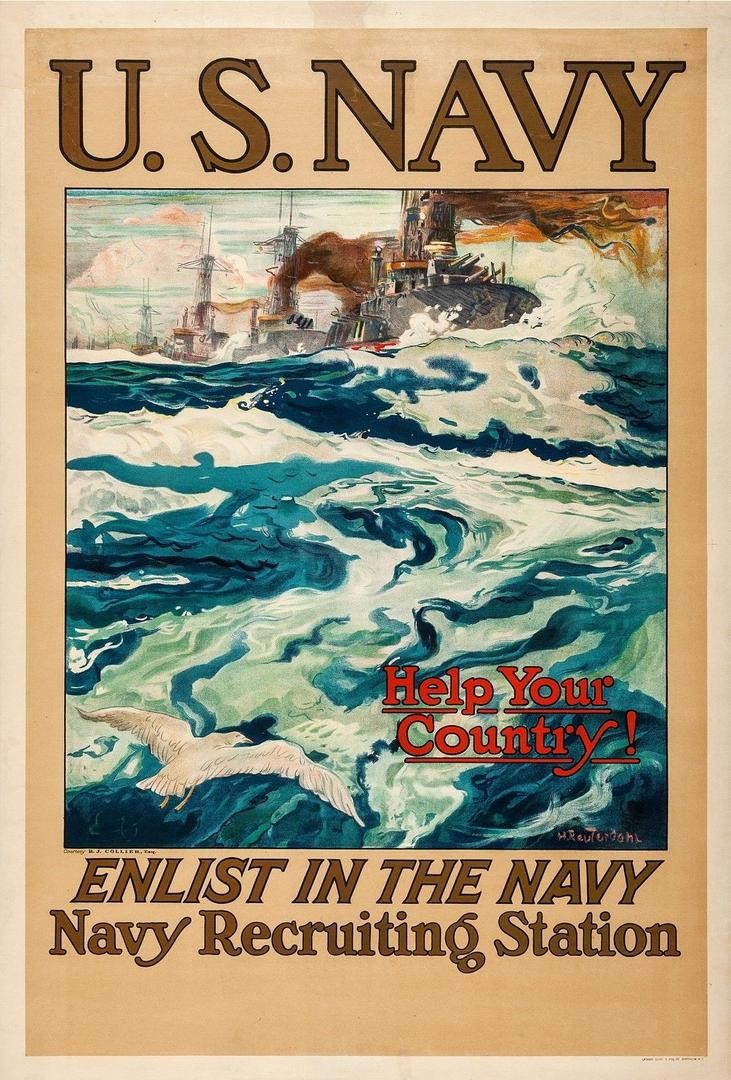 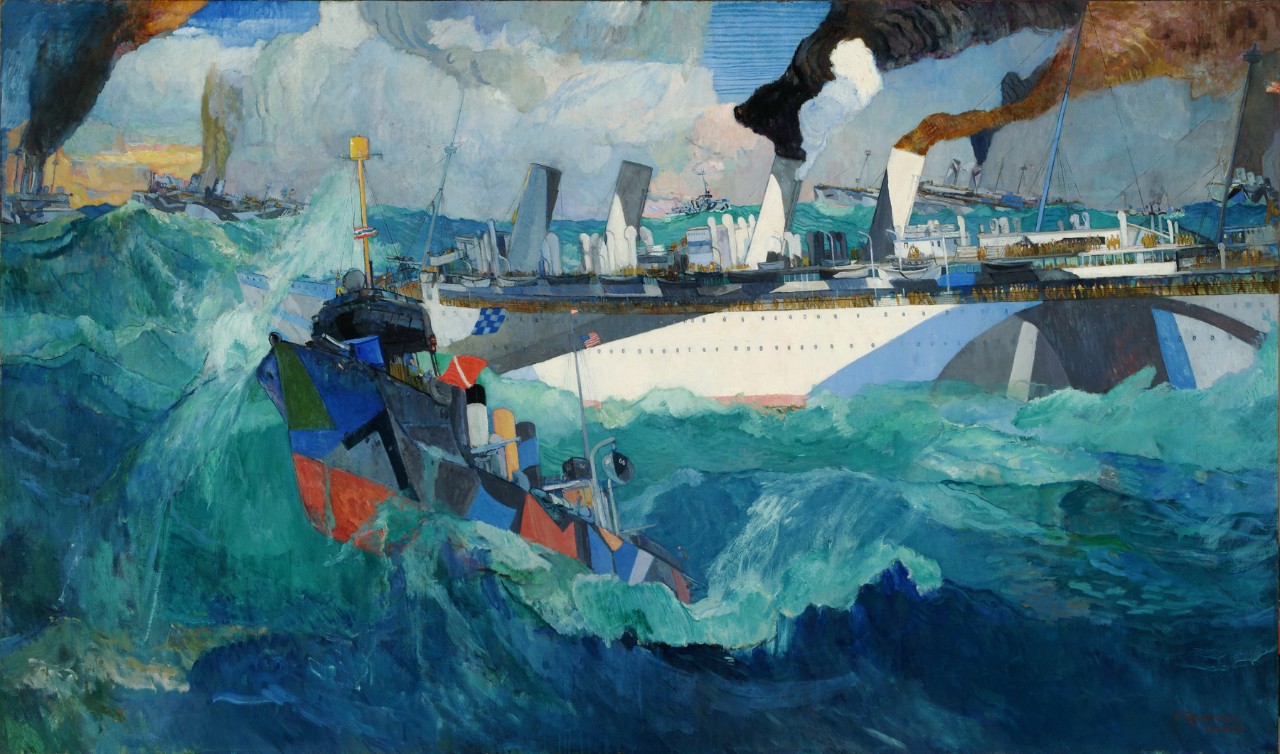 Convoy - c.1920 - USS Allen DD-66, SS France, USS Mount Vernon ID-4508
Here in a somewhat Cubist-Futurist vein are depicted camouflaged ships. This is not quite characteristic of Reuterdahl's work, but he is credited as the painter on the Internet site where it was found. 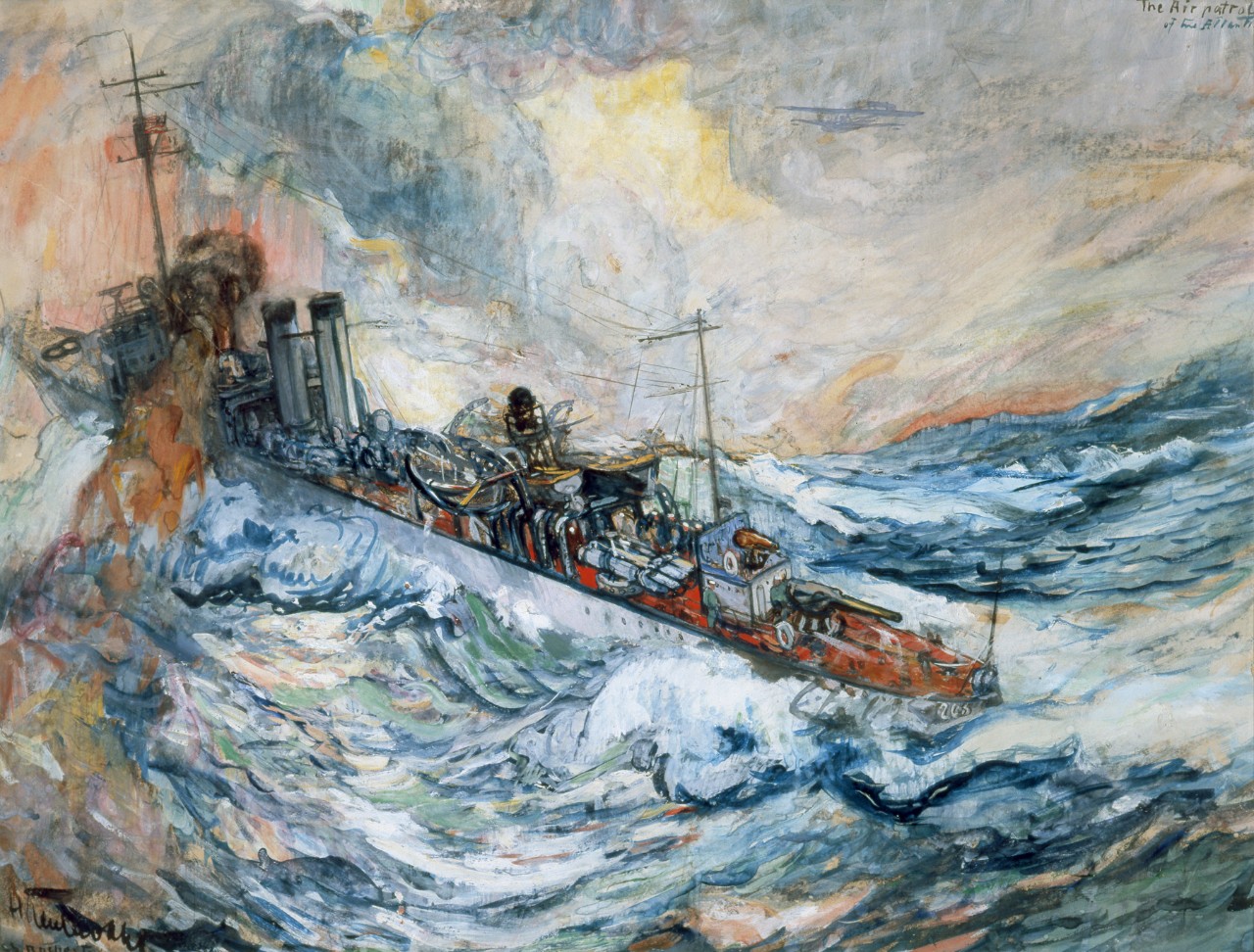 Air Patrol of the Atlantic - USS Edwards - c.1919 - watercolor
Another highly dramatized scene, though the North Atlantic can be vicious and destroyers are comparatively small and narrow. 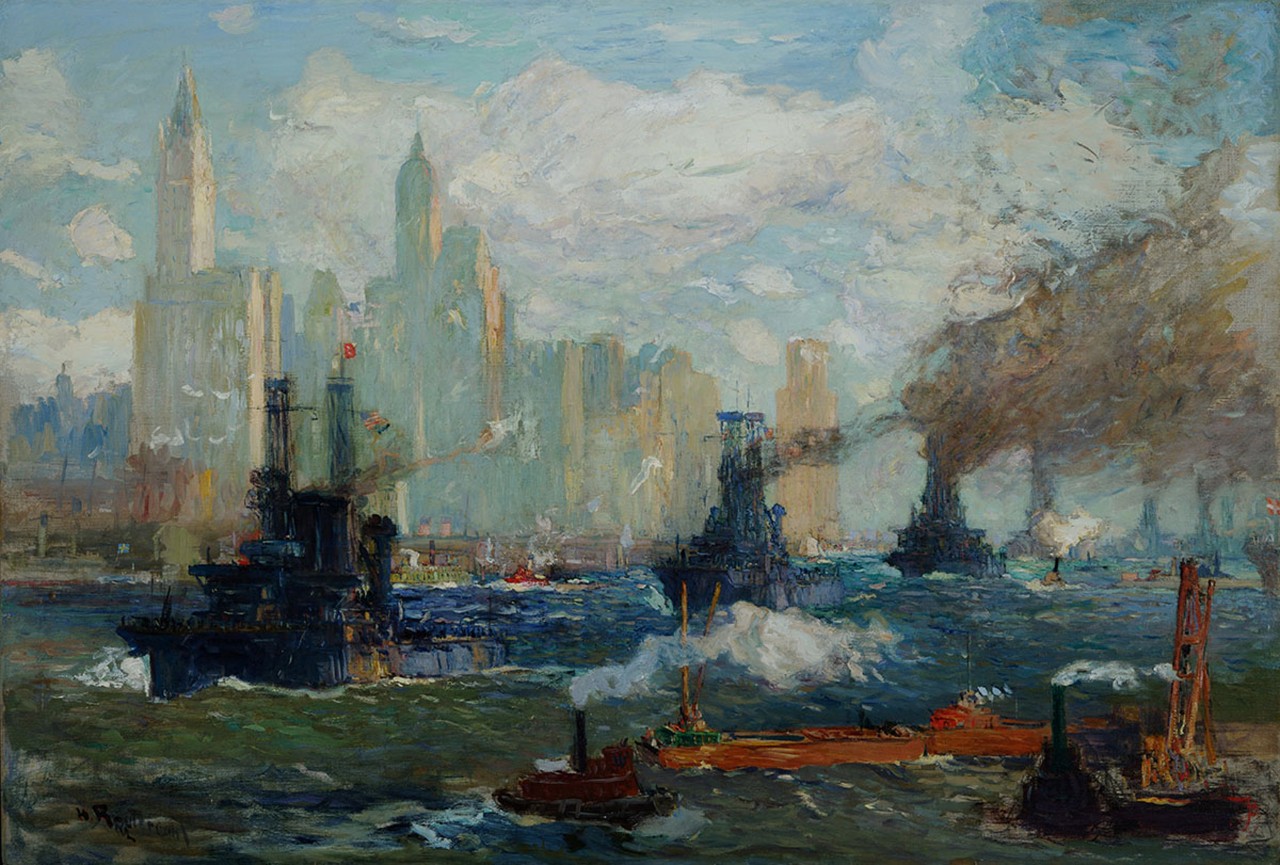 Battle Fleet Returning to New York Harbor - 1920
From about the same viewpoint as the 1914 scene -- southern Hoboken or northern Jersey City, New Jersey, perhaps. The buildings are shown more accurately here. Even so, I have the feeling that Reuterdahl used some exaggeration: the river seems pretty wide in relation to the indicated size of those battleships.
Posted by Donald Pittenger at 1:00 AM