Until recently I was unaware that, along with collective farming and other individualism-suppressing practices, there was the use of "brigades" of artists who collectively created large paintings in the Soviet Union. This is dealt with in this book starting on page 182. Around 1950 huge paintings were commissioned for exhibition, but with completion deadlines so tight that a single artist could not hope to complete the work in time. So "brigades" of artists able to paint in an academic style were formed to do the work. They were under the direction of a brigade leader, usually an academician, so their style of painting was similar enough that individual treatments would not be noticed. For example, one such painting, "On the Great Stalinist Construction Site" (1951), had five artists participating.

Even before this form of group painting emerged, there were cases where two artists would work on the same large canvas. An example is "The Taking of Sevastopol" painted 1944-1947 by Pavel Sokolov-Skalya and Andrei Plotnov. I viewed it when I was in Málaga, Spain in November where I visited a branch of Saint Petersburg's excellent Russian Museum. It was holding a year-long (ending February 2019) exhibit titled "The Radiant Future: Socialist Realism in Art." A fine exhibit. Plenty of paintings, some of which I even knew about before I visited. Of course I took lots of snapshots, including some of The Taking of Sevastopol, shown below. Click on images to enlarge. 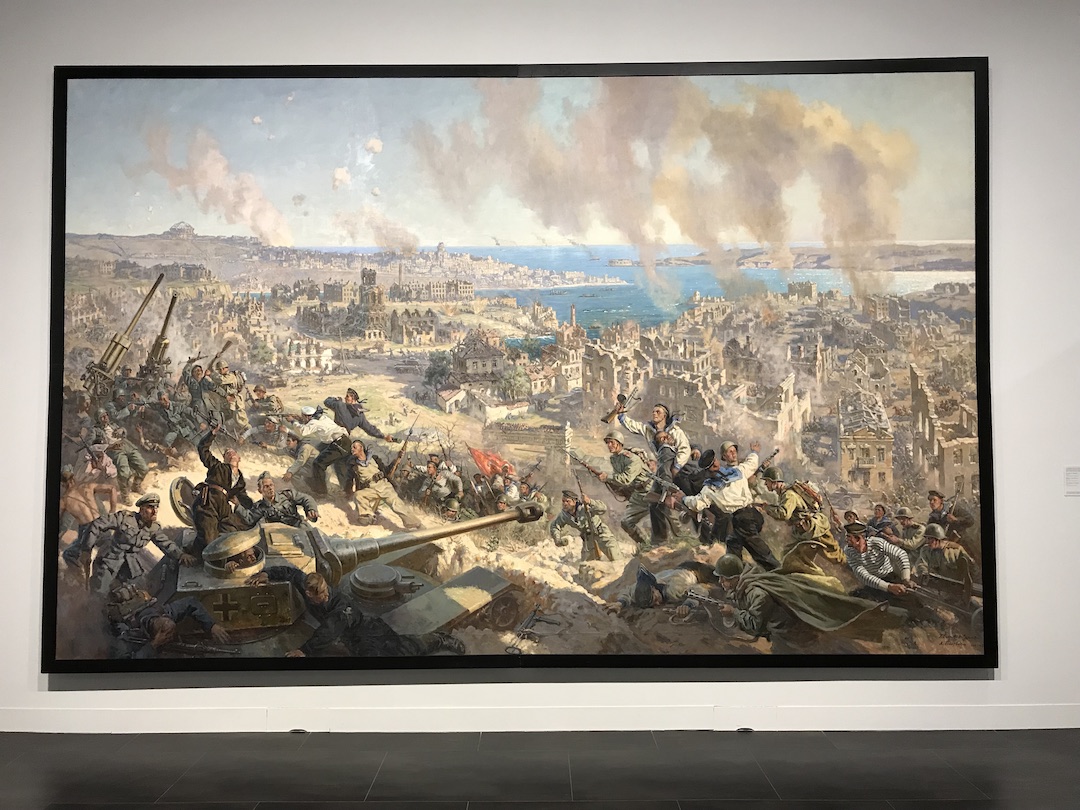 The Crimean port city of Sevastopol was captured by Germany in the summer of 1942 after an eight month siege.  The Russians recaptured it in the spring of 1944, this action being the subject of the painting. 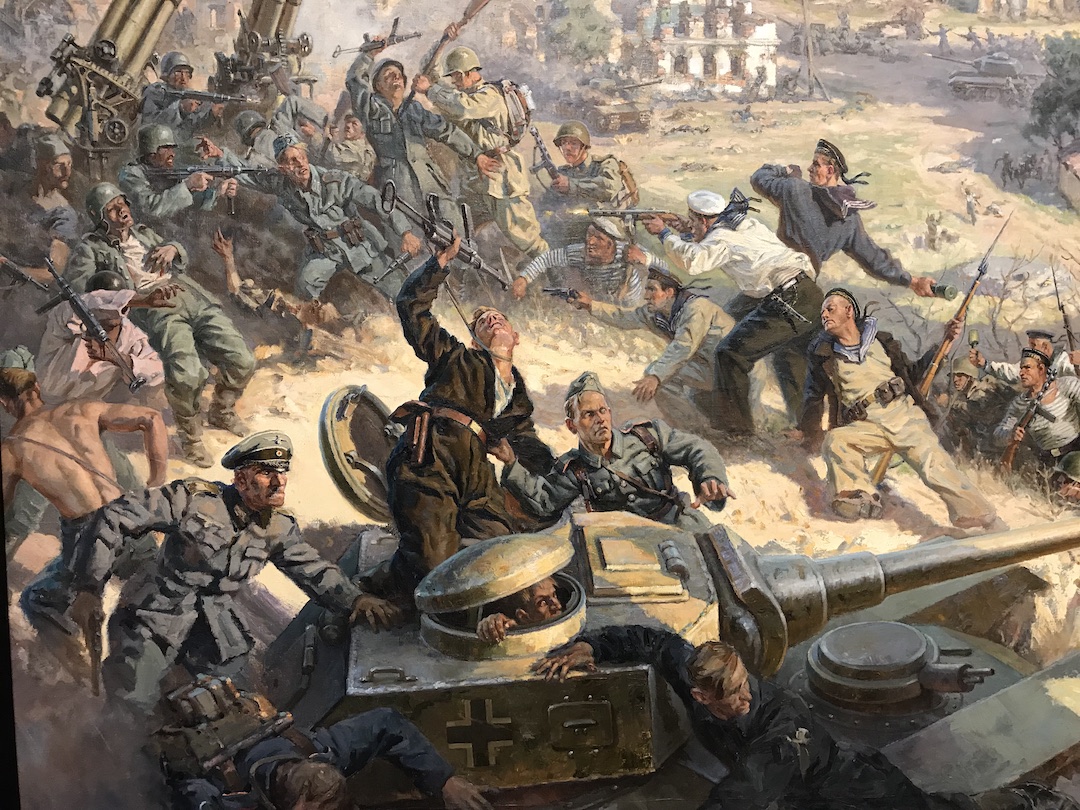 Russian soldiers and sailors are shown attacking Germans, a number of whom are in a state of panic. I'm pretty sure this scene is contrived for artistic and propaganda purposes. Such a concentration of men, artillery and a tank would have been quite rare in World War 2. Furthermore, hand-to-hand combat was not a common as in earlier wars, but might have been more prevalent on the Russian front. Most likely the Germans held off the Russians as long as they could using long-range rifle fire and then retired as carefully as they could manage. However, at the crest of the bluff above the city shown here, there would have been some action because a few German troops were needed to delay the Russian advance up the slope. Also, note the falling Russian soldier at the right of this detail photo and compare it to the image below. 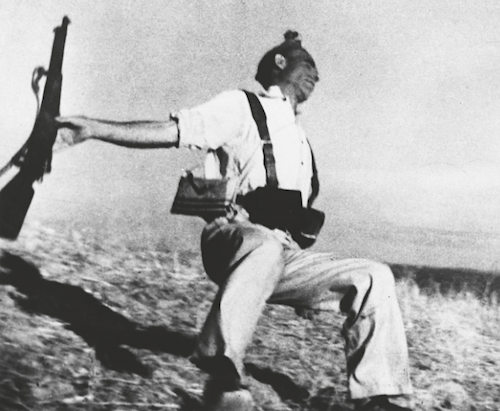 Robert Capa's famous, but controversial, photo of a Republican soldier being killed during the Spanish Civil War of 1936-39. The pose isn't identical to that of the figure in the painting, but there are similarities -- note the forward legs and the pant leg cloth folds in each image. 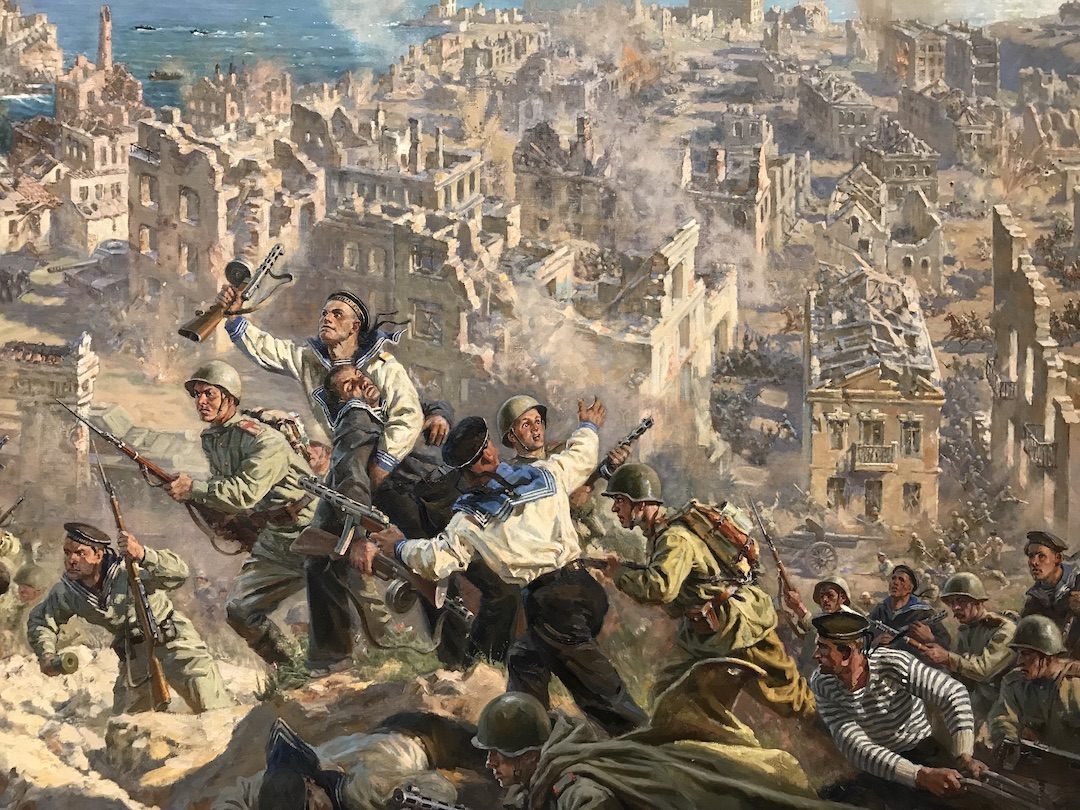 Panning to the right. Again the soldiers and sailors are packed tightly for reasons of drama. The background city view reflects that most of the building in Sevastopol were damaged during the earlier siege. I wonder if one artist painted the city and other background features while the other concentrated on the soldiers.
The term"tag-team" in the title of this post has to do with a feature of American professional wrestling whereby two two-man teams participate. Only two opponents are in the ring at one time, but team members can be substituted if the man in the ring touches (tags) his teammate waiting outside the ropes.
Posted by Donald Pittenger at 1:00 AM