John Singer Sargent (1856-1925) was perhaps the leading portrait artist of the late 19th and early 20th centuries (Wikipedia entry here). I've written about him several times on this blog, so use the Search tool at the right if you are interested in locating and reading those posts.

As expected, most of the portraits he painted were of one subject only. Occasionally he would include two subjects and there were times he dealt with three or more. This post deals with examples of the latter case.

The focus is on composition: how his subjects were posed.

At this late date it's probably impossible to be sure whether those arrangements were by Sargent or if they were influenced by whoever commissioned the paintings. However, odds are it was Sargent's doing, so I'll treat the compositions as his. The images are in chronological order aside from the final one, which was painted first. Click on them to enlarge. 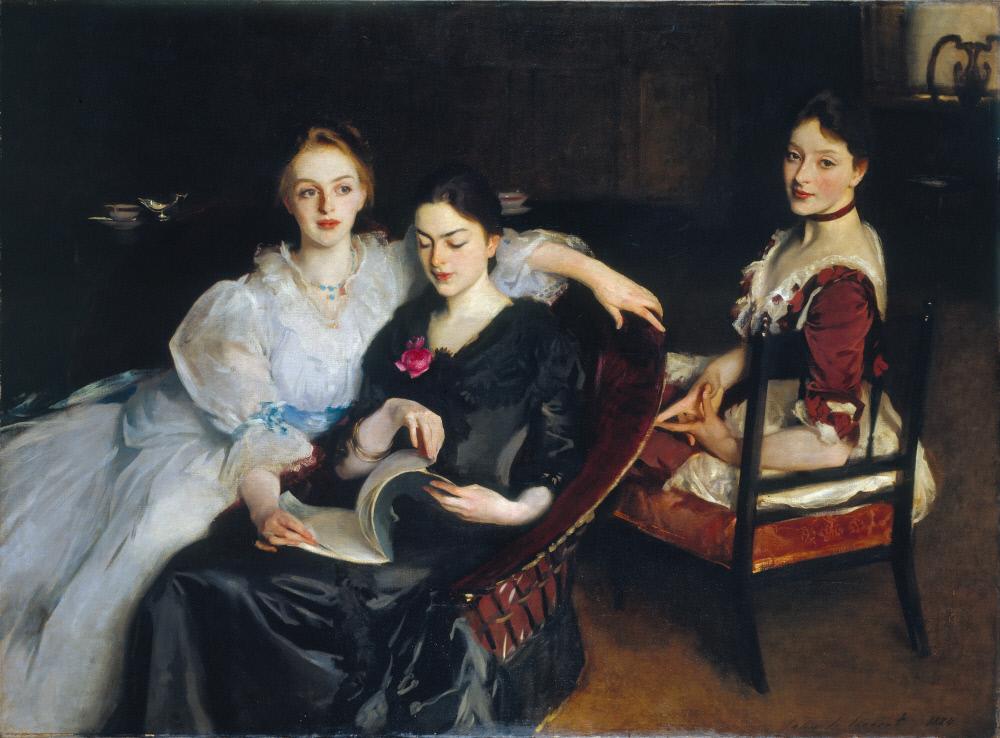 The Misses Vickers - 1884
Here we find a sort of V-shape or checkmark shape composition. The young ladies are dressed in different colors and are looking in different directions. The one at the right appears to be looking at the viewer -- if she weren't, then she would tend to drop off the canvas due to her semi-isolated position. 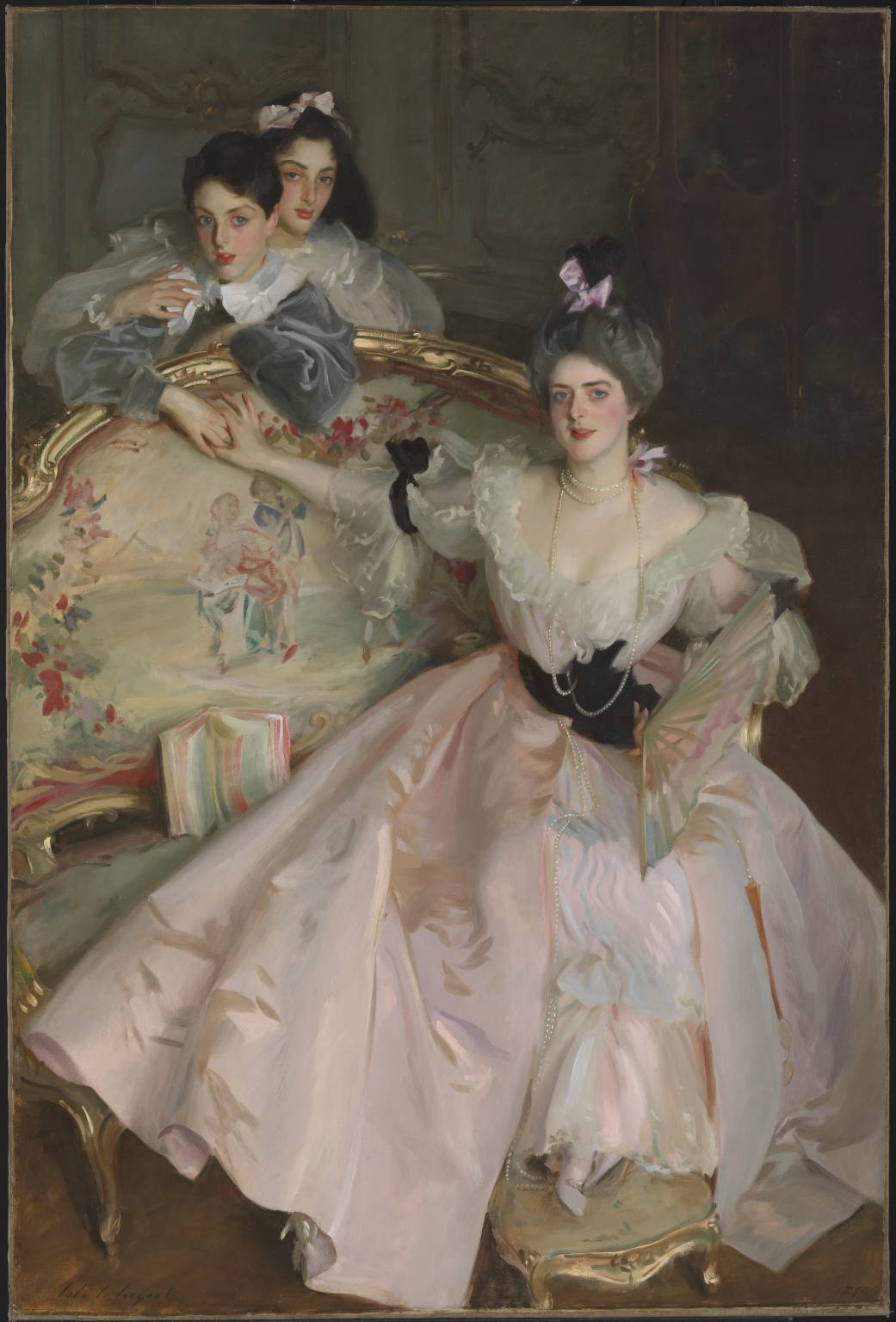 Mrs Carl Meyer and Her Children - 1896
A zig-zag composition starting with the children' faces, proceeding to Mrs. Meyer's face, and then zagging down across her dress towards the lower left. Clearly Mrs Meyers is the prime subject and her kids are incidental because there is little of them to be seen. 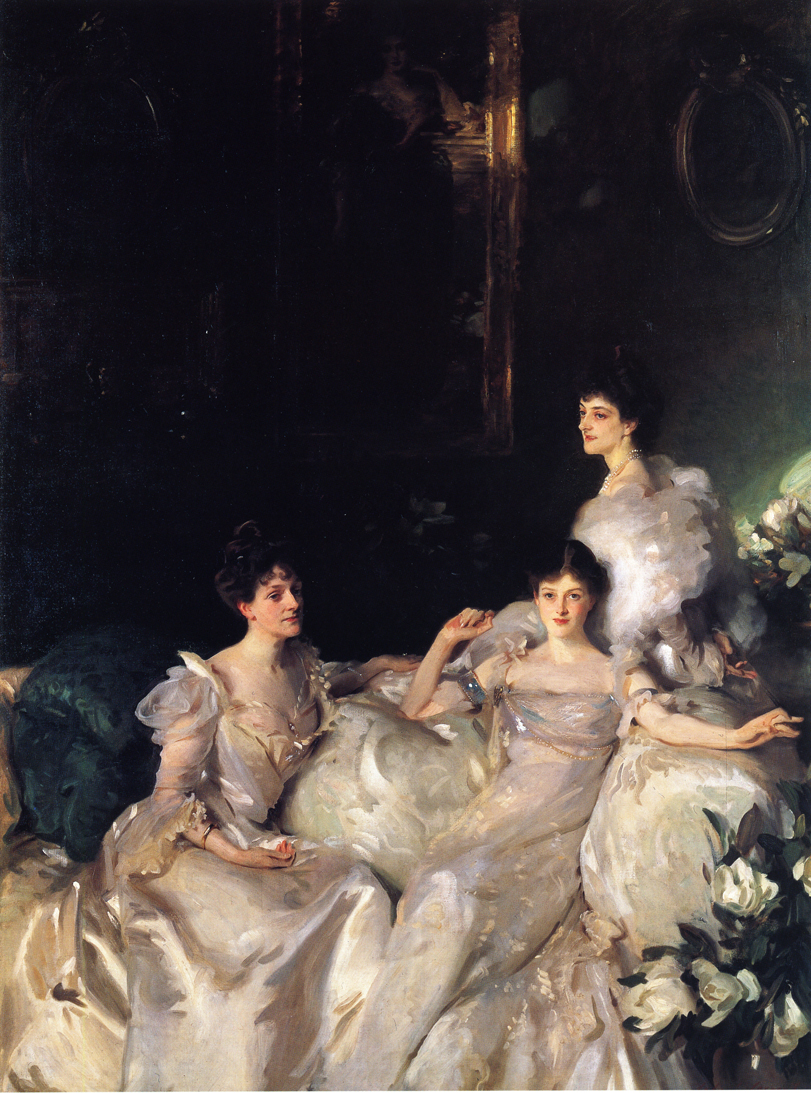 The Wyndham Sisters - 1899
This is interesting because the canvas is split diagonally with the upper, dark background and the lower, bright dresses of the subjects. Again, the subjects are looking in different directions. Anchoring the scene is the pretty one in the middle who is gazing back at us. 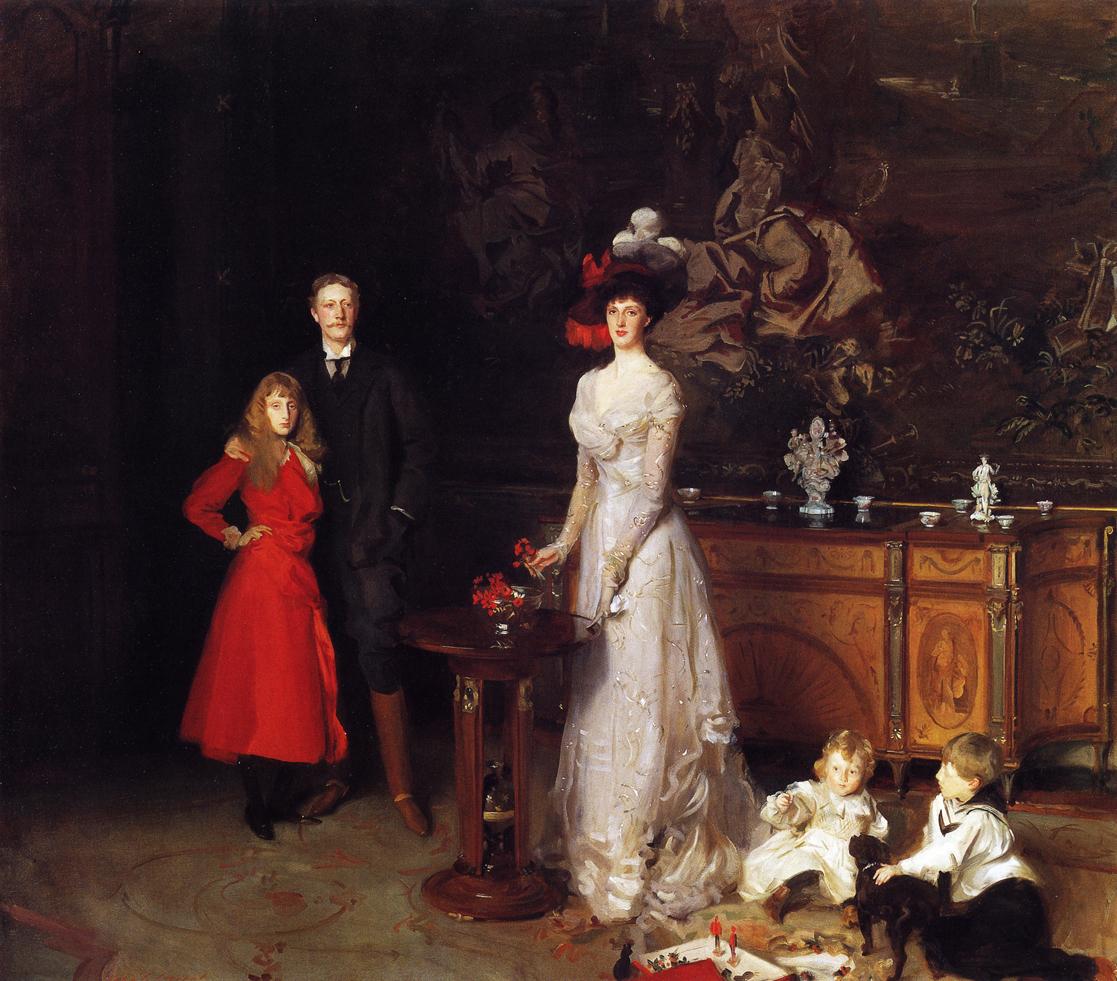 The Sitwell Family - 1900
This painting is almost completely different. Rather than having the subjects lumped into compositional areas, here they are mostly separate. The main sense is diagonal, though much weaker than in the previous image. Here it runs from towards the upper left to the lower right where the young children are. The red dress of the daughter anchors the upper left because the dark clothes of the father blend with the dark background there. Contrasting the diagonal are the two strong vertical elements of the standing people. 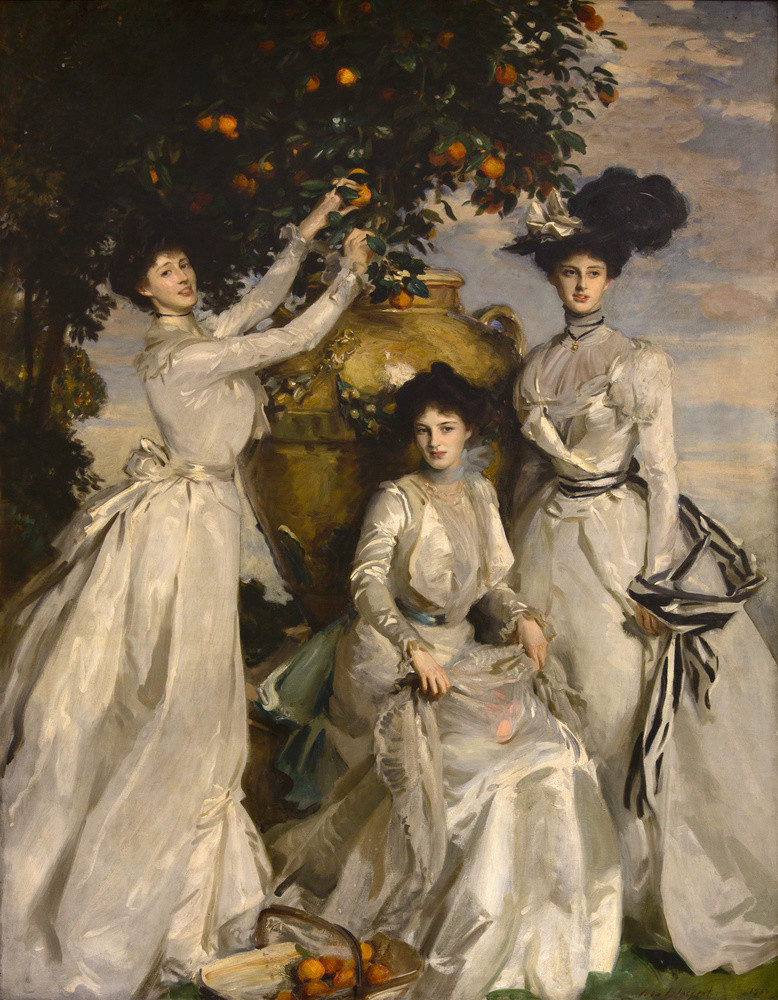 The Acheson Sisters - 1902
This painting gives me the feeling of advertising illustrations from circa-1900. Here the subjects are dressed in the same color and fabric. The faces of the subjects are the apexes of a shallow triangle. Although all the young women face the viewer, their eyes are looking at different places -- a subtle touch that avoids a static feeling that the similar head positions might have created, 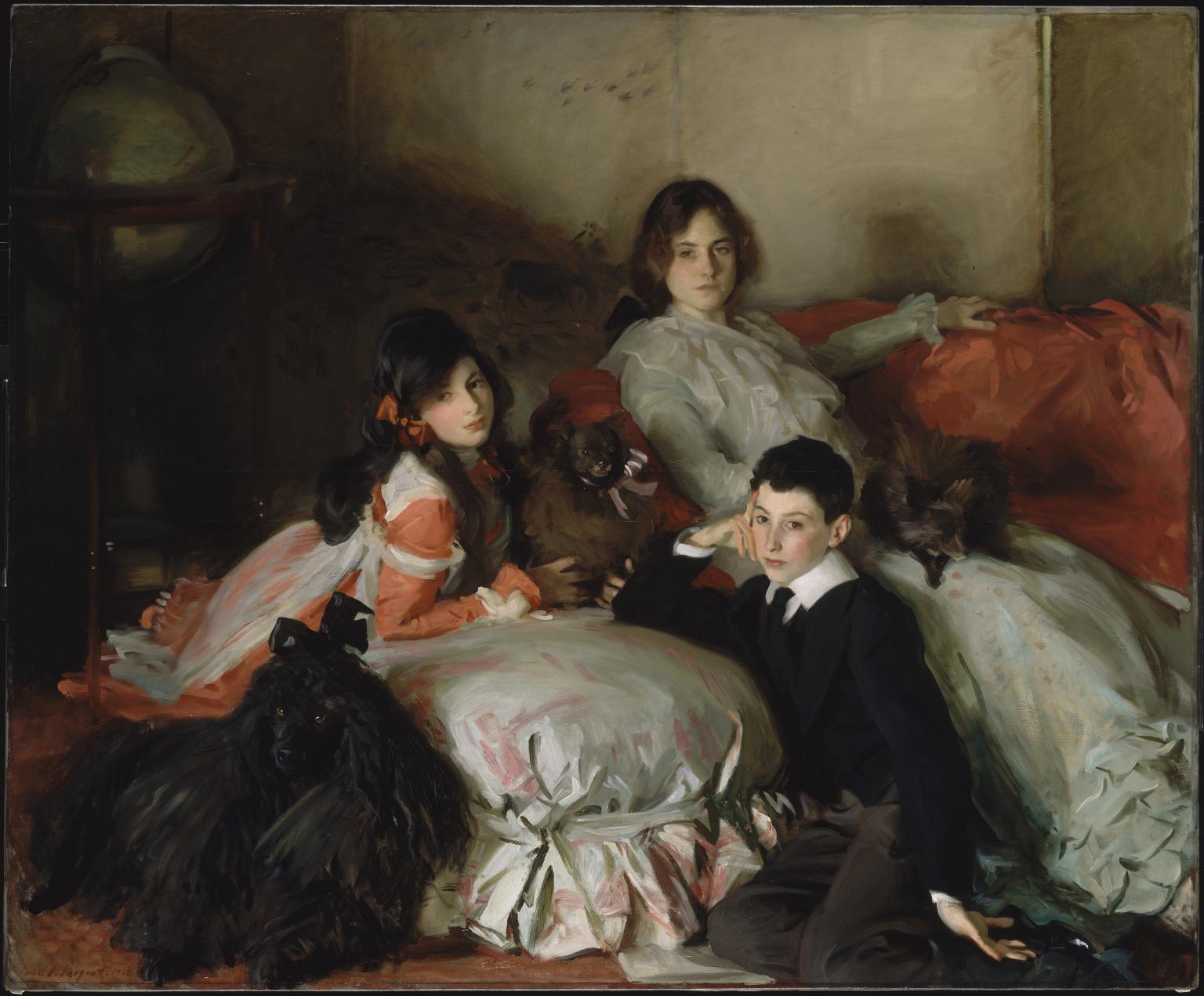 Essie, Ruby and Ferdinand, Children of Asher Wertheimer - 1902
Yet another composition of diagonals and triangles. Sargent added the three dark dogs probably at the request of the Wertheimers. 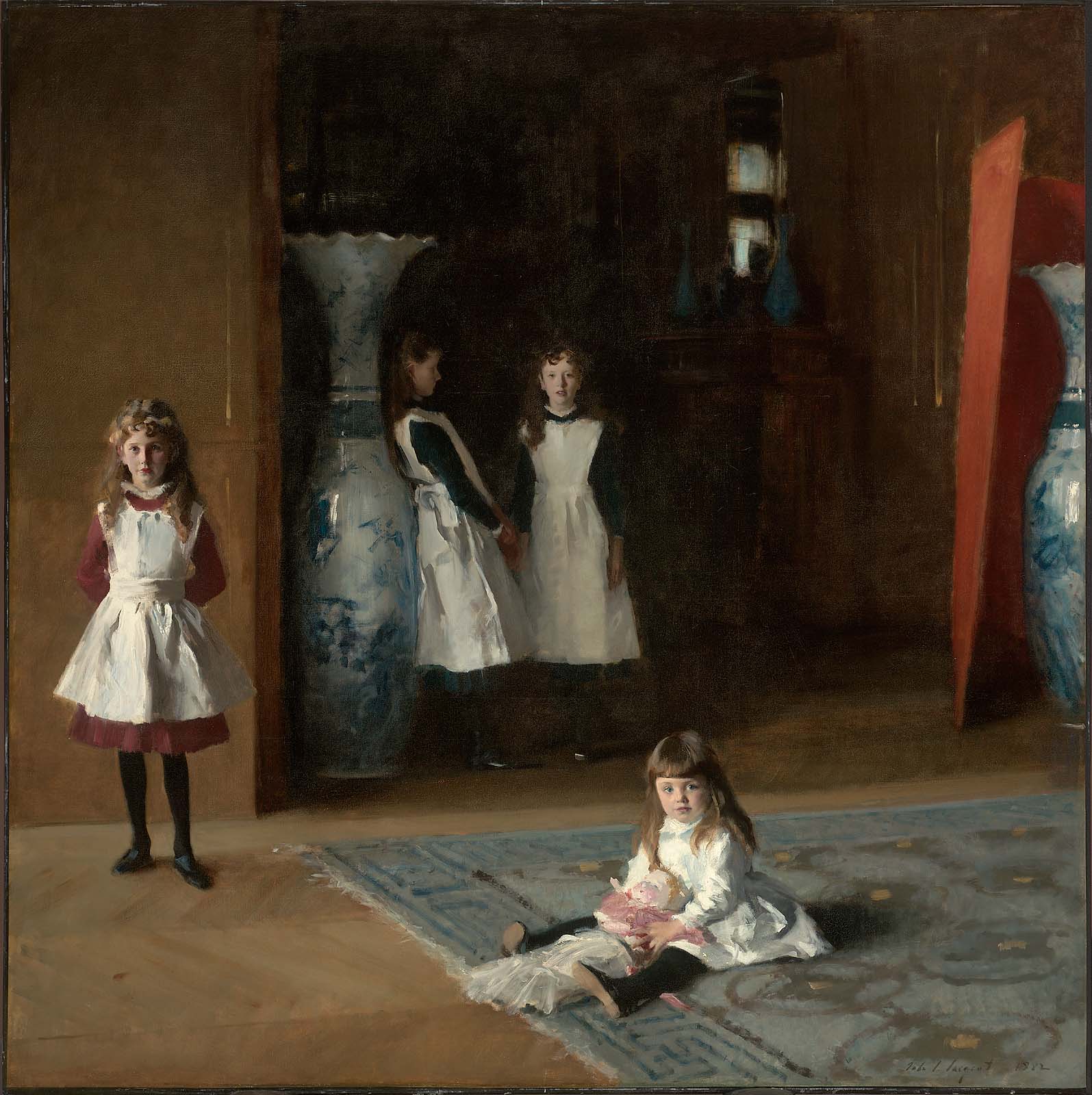 The Daughters of Edward Darley Boit - 1882
Sargent painted this at age 26, a seemingly young age for creating such an intriguing, unconventional scene. The four girls (plus the doll) are arranged in a kind of trapezoid that overlays some diagonals. The center is largely a dark void, a bold, unconventional choice by the painter. Little seems obvious where the attitudes of the subjects are concerned. In fact, this enigmatic painting has been analyzed repeatedly over the years, and I have nothing new to contribute. A Wikipedia entry dealing with it is here. A review of the book “Sargent’s Daughters” by Erica E. Hirshler that deals with the painting and its subjects is reviewed here. It happened that in later life none of the girls had conventional adulthoods -- something that Sargent perhaps intuited, knowing the family fairly well.
Posted by Donald Pittenger at 1:00 AM

He painted few adult men. I am guessing that whoever commissioned the family portrait ... only paid for his wife and his children to be included. Perhaps the men were too busy to be included, or too proud. Or perhaps Sargent asked the men to make themselves scarce.

Fascinating stuff. I checked out the two links. Thanks.

I saw the Sargeant exhibit at the Portrait Gallery in London a few years back and then it turned up (for free) at the Met later. Damn, wasted a few hours of vacation time and money too. I don't remember that show having much of this kind of rich people group family portraiture. Clearly the people who commissioned his portraits were saying we're doing the traditional rich people thing, but we're modern types who get what's happening with art as well.