Jo Kotula (1910-1998) specialized in illustrating aircraft over a long, successful career. As best I can tell from a Google search, he seems to have done little in the way of aviation art in the form of standalone paintings, unlike the typical professional aviation artist. Kotula's work was mostly in the form of cover art for magazines along with boxtop illustrations for model airplane kits. He also did advertising and editorial art.

Almost nothing about him turned up in that search. The most detailed biographical information is here (scroll down). Another dab is included in an image below. 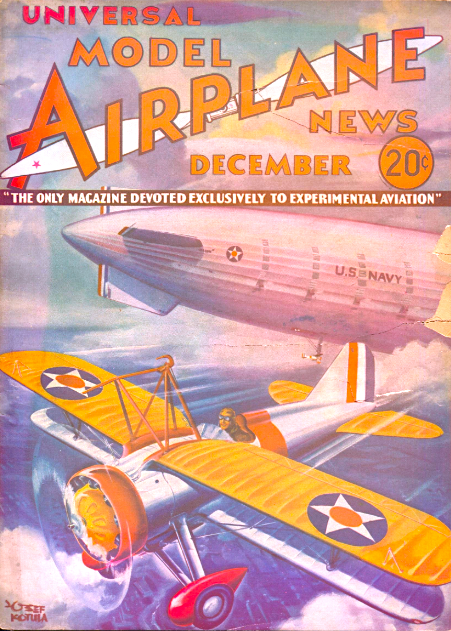 One of the earliest examples I found: December 1933. Note the signature in block letters with his full name. Before long "Josef" became "Jo" and he shifted to cursive script. Shown here is a U.S. Navy dirigible and a Curtiss F9C-2 parasite fighter carried by the airship. 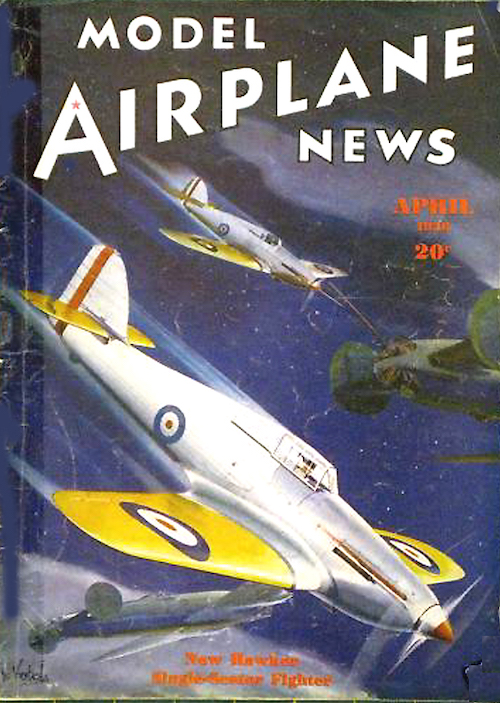 The signature evolves to what seems to be "Jo" while the letters are caps and lower case in this April 1936 cover. The Hawker Hurricane fighter existed only as a prototype at that point, so the combat scene here is pure conjecture. 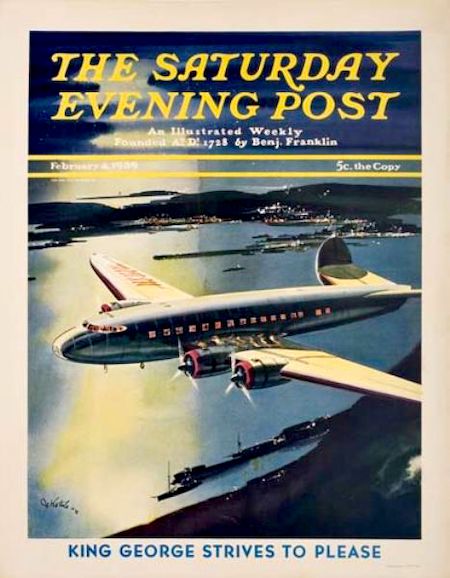 By 1939 Kotula hit the magazine Big Time in the form of this Saturday Evening Post cover. The aircraft is fictitious, but seems to be inspired by the Douglas DC-4E experimental transport that first flew in 1938. 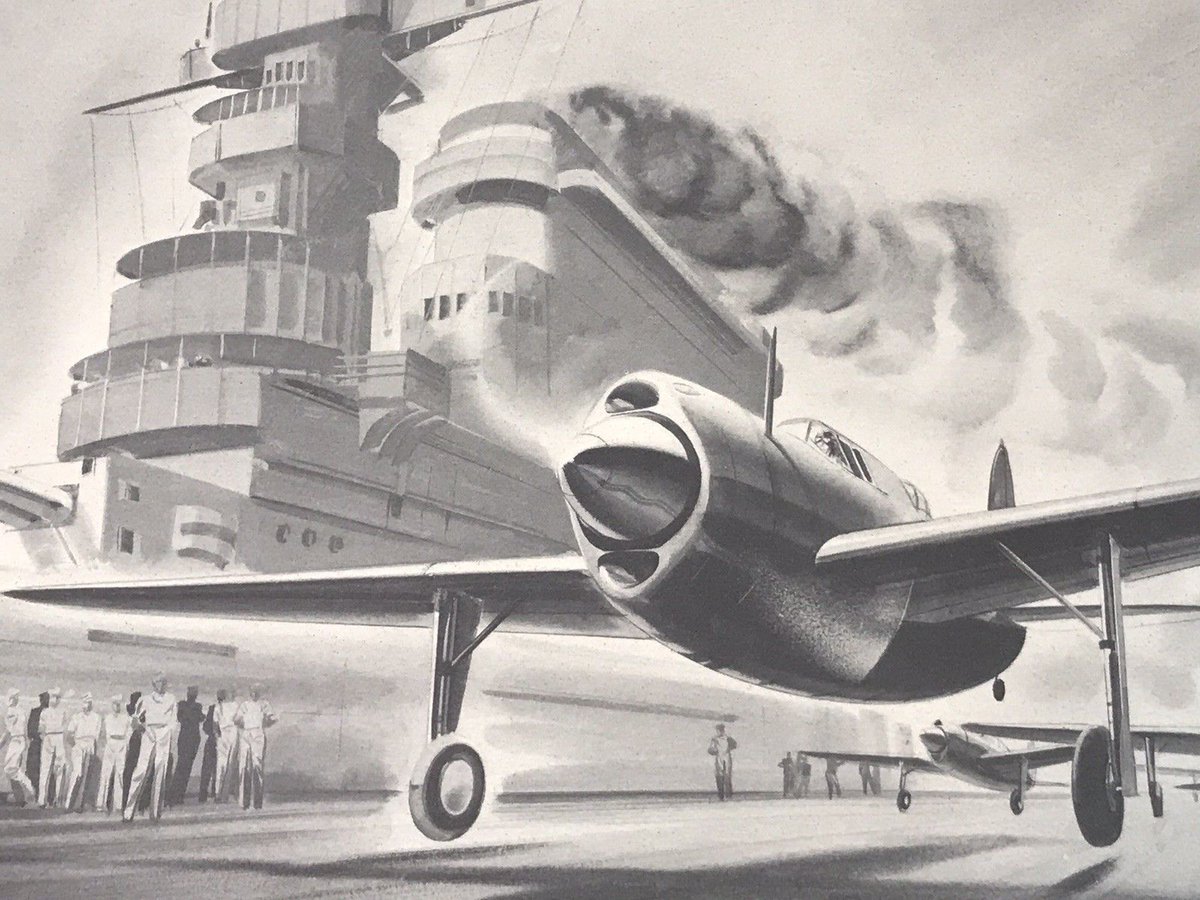 A cropped portion of what probably was art commissioned by the Brewster firm that built the F2A Buffalo fighter shown here on the aircraft carrier Saratoga. Kotula interprets the Buffalo as being noticeably more svelte than the tubby little beast actually was. 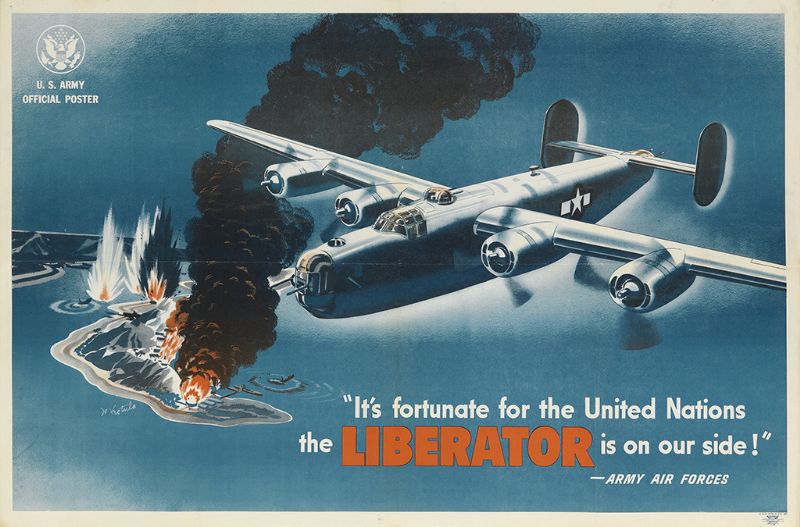 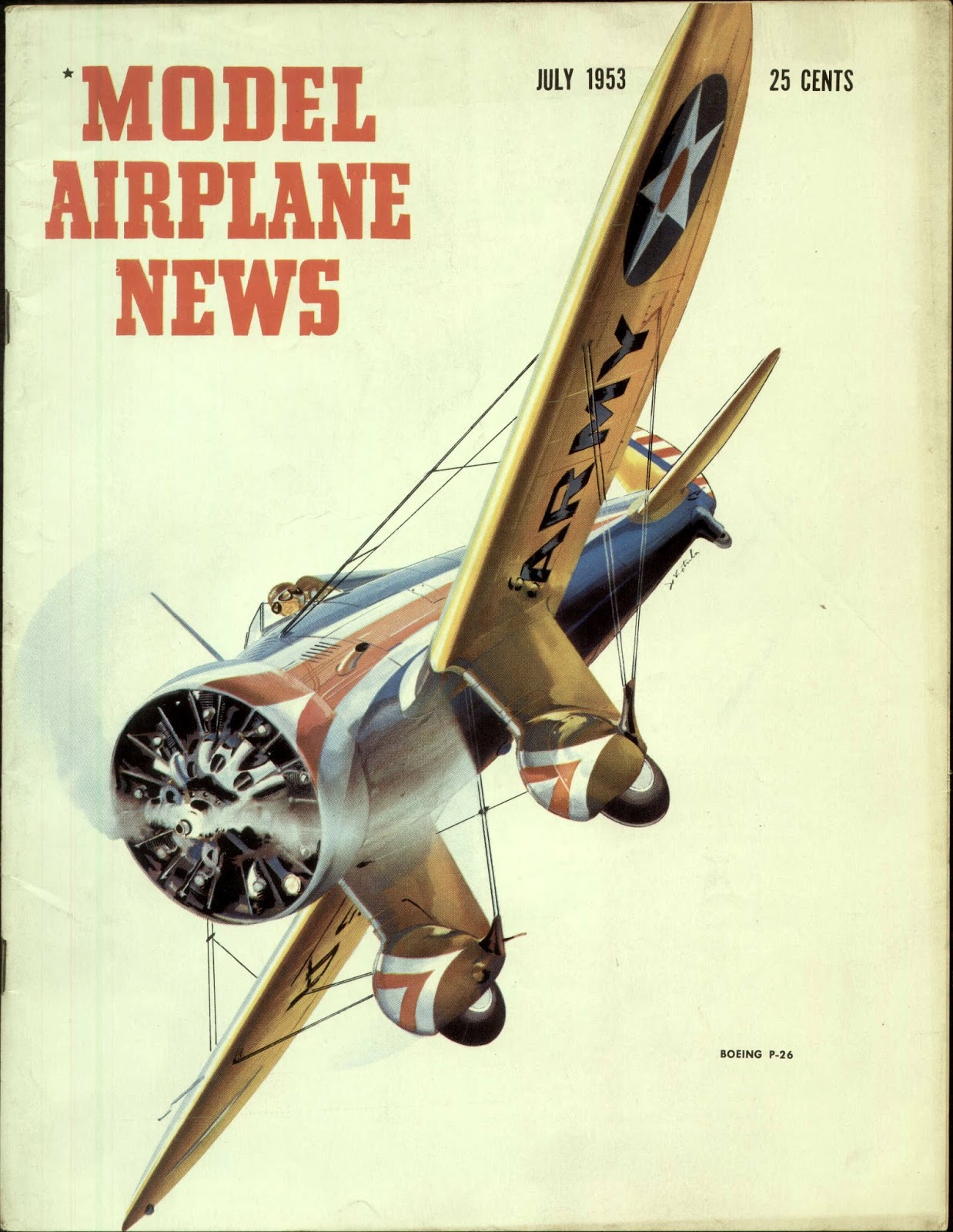 Model Airplane News cover featuring a 1934-vintage Boeing P-26 fighter. Kotula has distorted the perspective slightly as to include more of the tail. 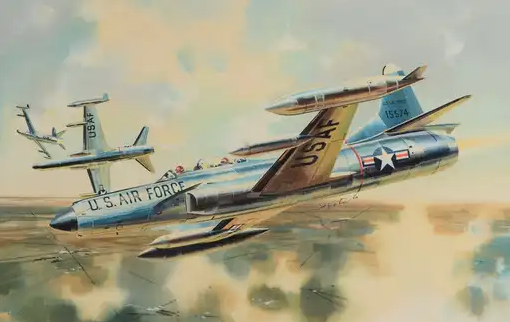 Lockheed F-94C Starfire interceptors. This has the appearance of conventional aviation art, though it might have been painted for another purpose. The aircraft strike as as being a trifle more sleek than there actually were. 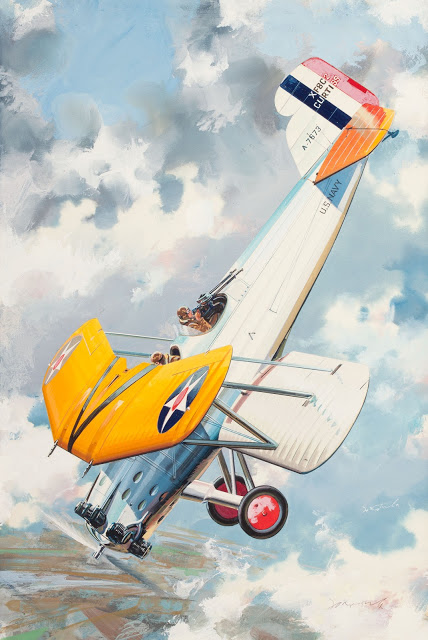 Again, I'm not sure if tis was cover art or aviation art.  The plane is a 1930s Curtiss XF8C dive bomber prototype. 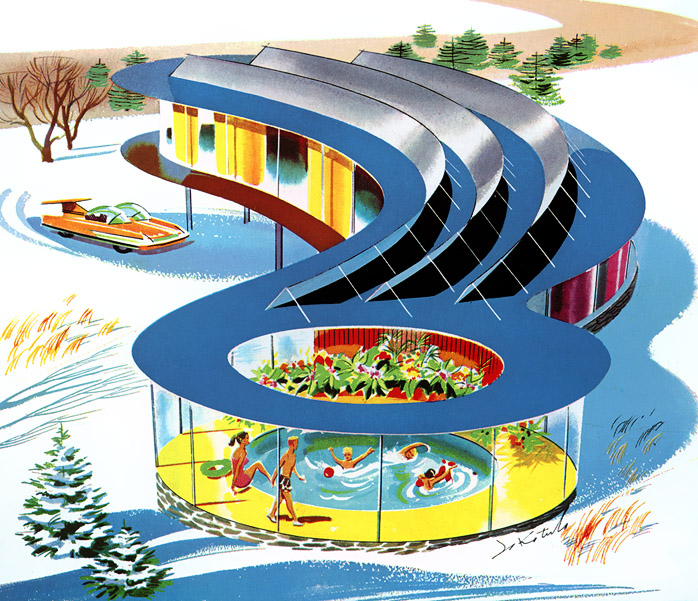 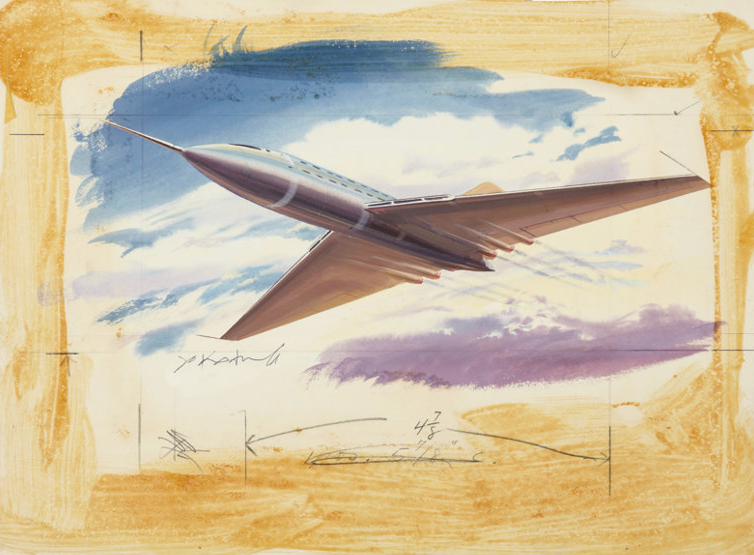 An interesting example of an illustration in raw form. The jet transport seems to be conjectural. 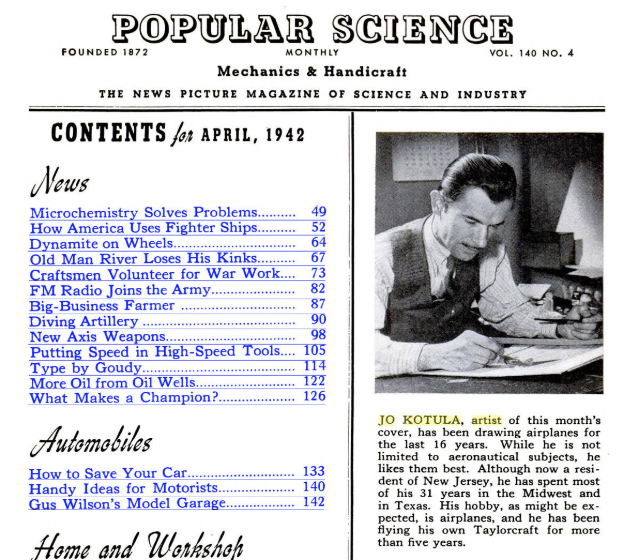 Contents page fragment from the April, 1942 Popular Science Magazine with some background on Kotula. 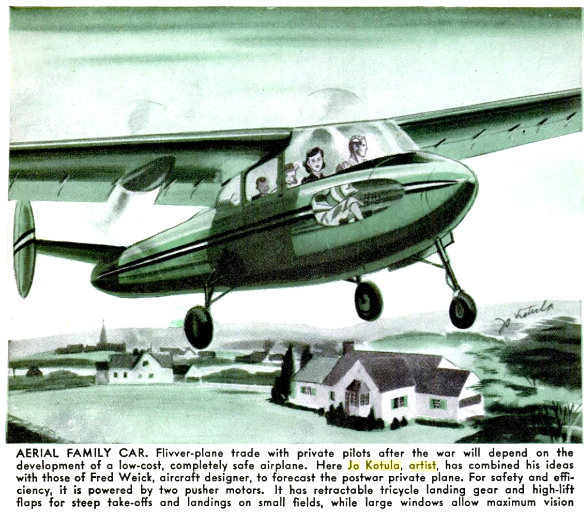 Clip from the November, 1942 Popular Science.  During World War 2 several articles and advertisements appeared featuring prospective postwar family airplanes. I shudder to think of the aerial traffic and collisions that would have occurred if these fantasies had become commonplace.
Posted by Donald Pittenger at 1:00 AM

Nice analysis! I met Kotula at a gallery show in NJ in the late 1970s. He had a lot of original art for sale which I foolishly did not purchase. (Of course i was in high school at the time). Some of it was cover art for magazines but others appeared to be stand alone works.
One correction: the carrier scene with the Brewster airplane depicts the prototype Brewster dive bomber, sold to the British as the “Bermuda,” not the Buffalo fighter.
Thanks for posting this— well done!
— Dr Richard Muller, candrmuller@aol.com