Charles H. Hubbell (1898-1971) was an illustrator specializing in depicting aircraft. He is probably best known for his calendar illustrations for Thompson Products, a series that lasted for around 30 years.

Biographical information on Hubbell is sparse on the Internet. Sketchy sources are here and here.

As I've probably mentioned elsewhere, possibly years ago on the 2Blowhards blog and probably here on Art Contrarian, professional aviation art tends to be torn between two approaches. One approach is to meticulously depict an aircraft, perhaps even to the point of showing rivets on the metal (if there were any on the actual airplane). This tends to please a certain breed of airplane fan who expect the illustration to show everything. The other approach tends toward somewhat painterly, somewhat impressionistic views of aircraft. Here planes are depicted correctly in terms of their dimensions and the perspective from which they are viewed. But details are more selectively chosen, usually with one area in tighter focus in the way humans actually see things. Hubbell leaned towards the latter approach, though his skill level fell short of later aviation artists such as R.G. Smith, who I mentioned here.

Below are examples of Hubbell's work. Most or all are from those calendars, and most were probably painted 1946-1949.  The first five Great War images from the 1947 calendar are those I viewed on my bedroom wall when I was young, my dad having obtained one of those calendars. 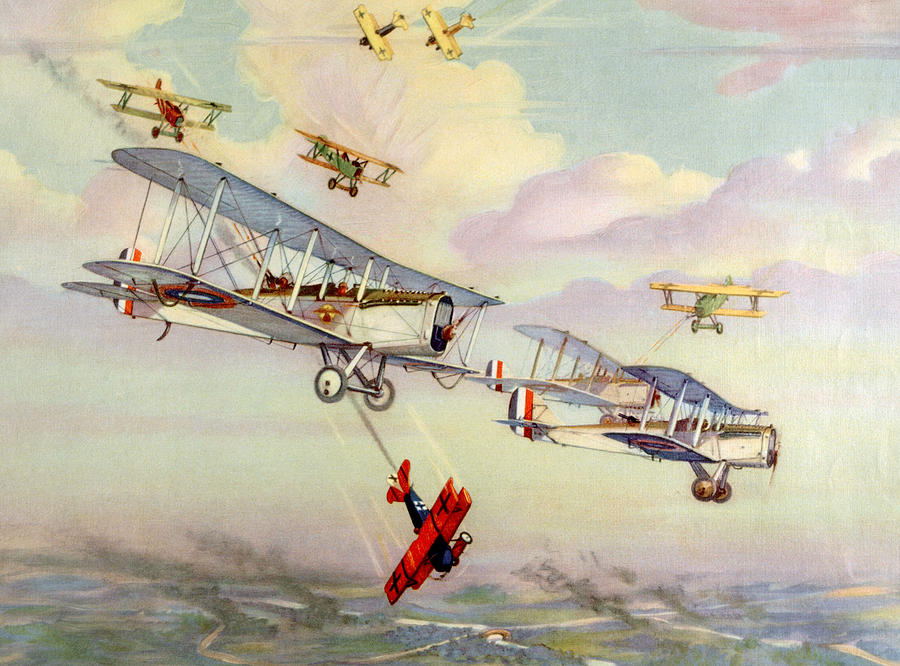 This shows some American Army DH-4 reconnaissance bombers under attack. 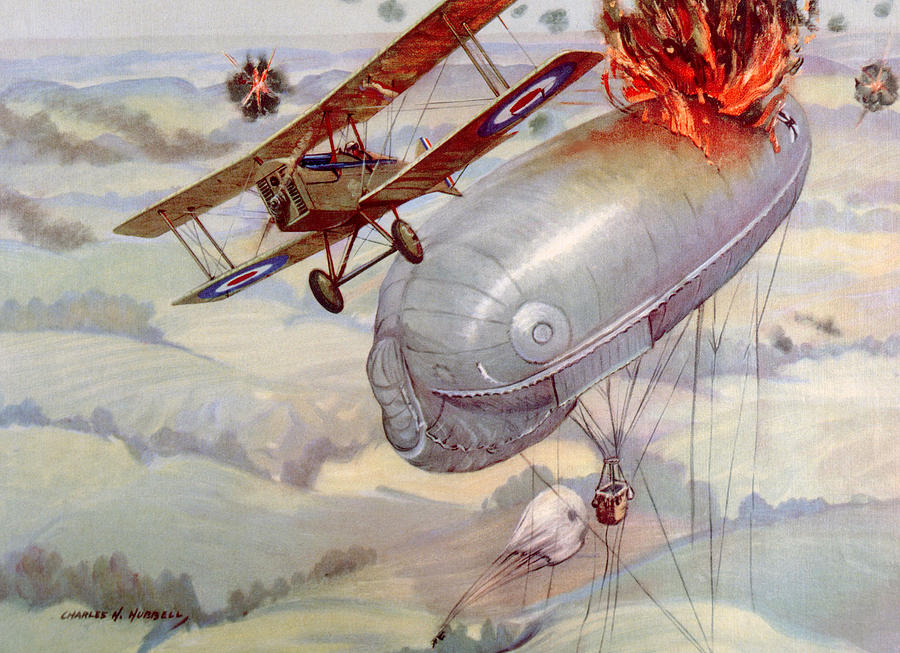 Balloon busting by a Royal Flying Corps S.E.5. This was far more dangerous than it looks because observation balloons were normally heavily defended by anti-aircraft guns. 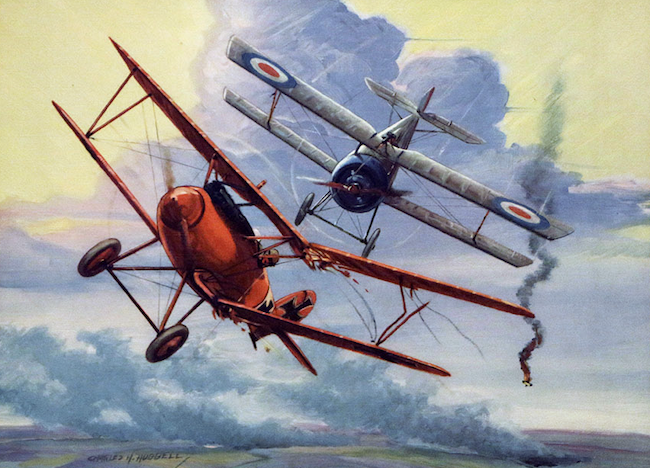 Canadian ace Billy Bishop is shown downing what looks to be an Albatross. 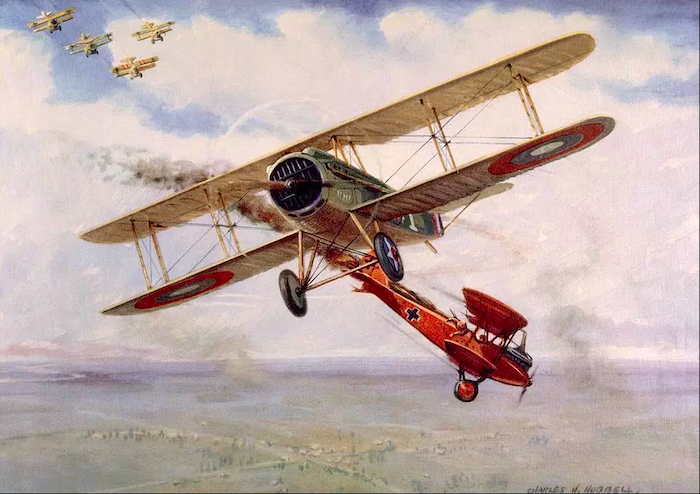 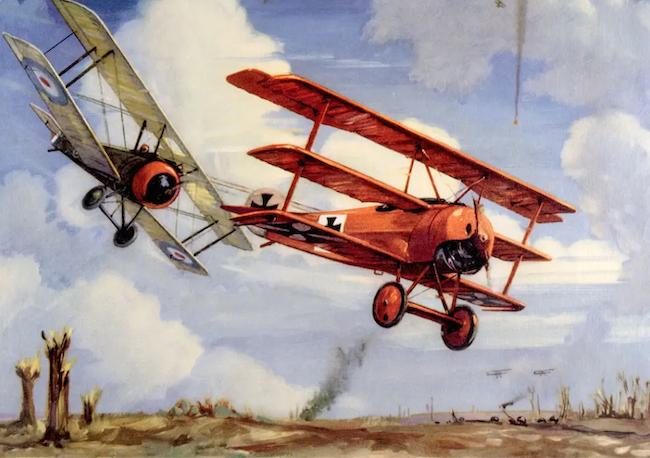 The final seconds of Manfred von Richtofen's life. Whether the Red Baron was shot down by a fighter or by ground fire can never be resolved, so Hubbell includes both possibilities in this illustration. 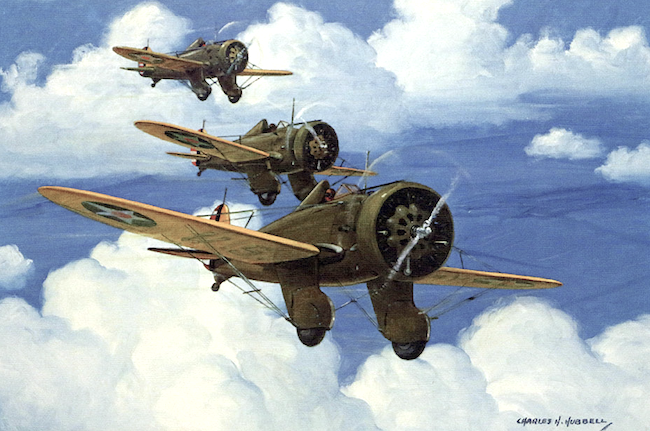 Army Air Corps P-26 "Peashooters," active in the early/mid 1930s. Theories vary, but I am convinced that unofficial nickname was due to the long, peashooter-like gunsight. 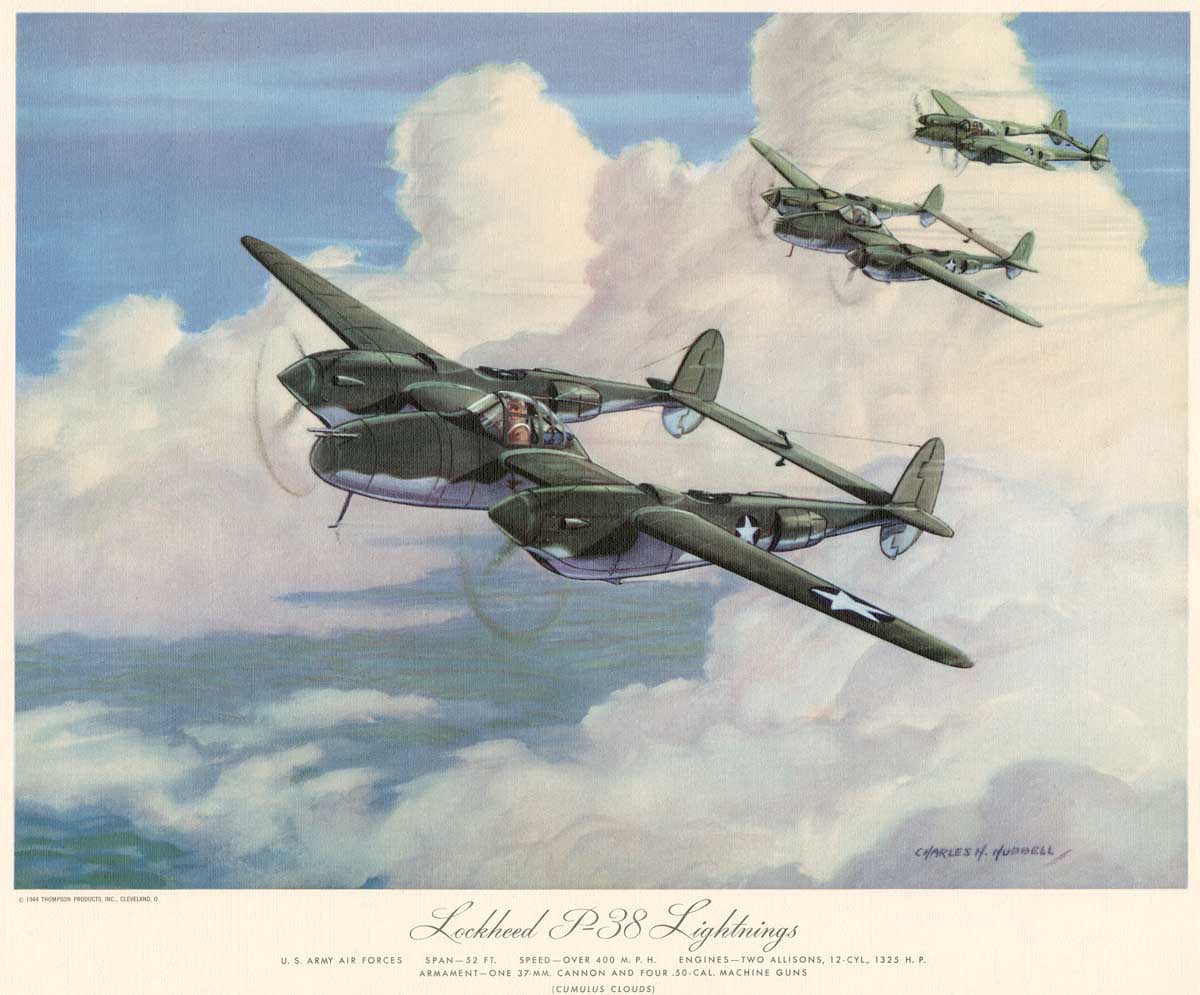 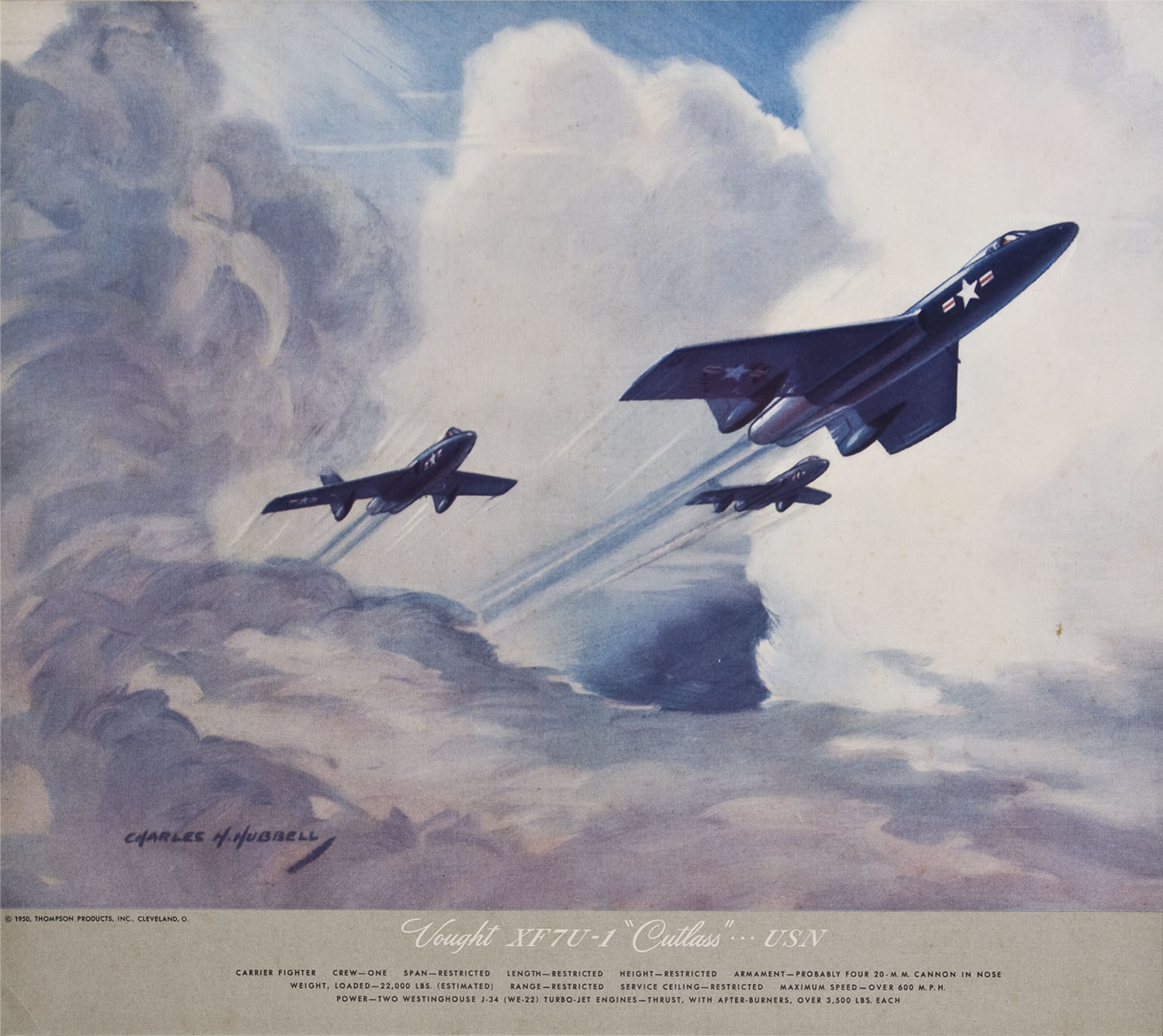 A 1950 image showing the XF7U-1 Cutlass Navy fighter. The prototype Cutlass was an exciting-looking aircraft (though here Hubbell makes it slightly more graceful than it was), but went through a long, troubled development. 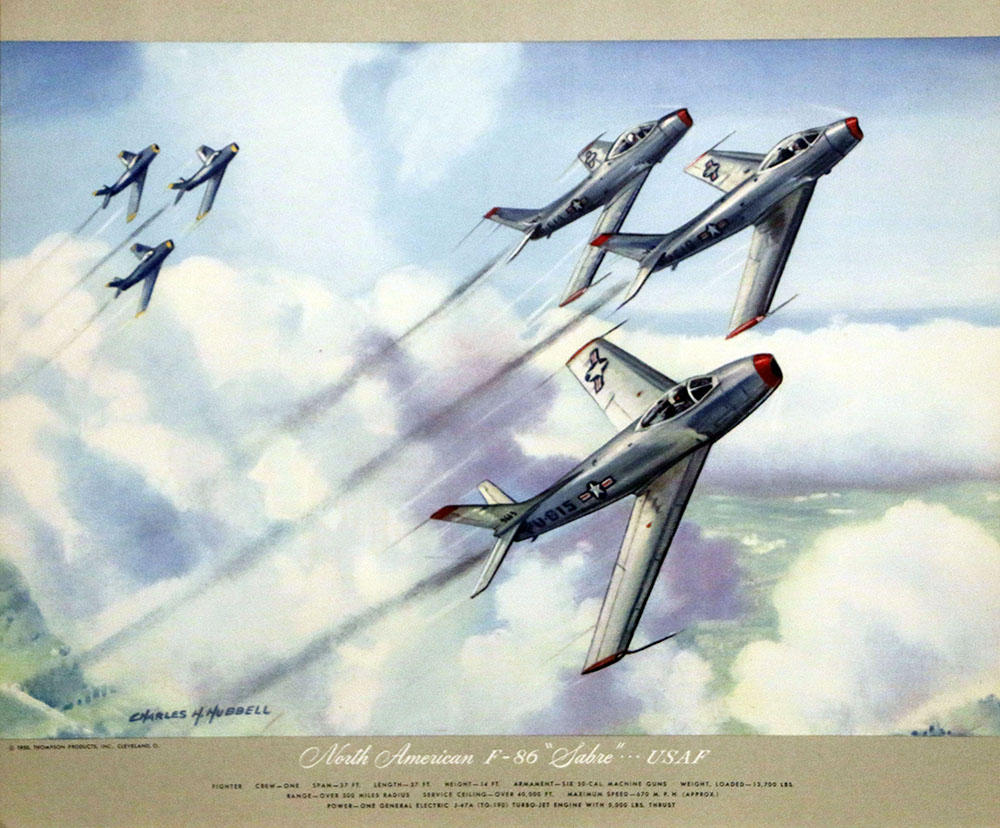 Another 1950 illustration, this of the F-86 Sabre that was entering service about that time.  The Sabre's fuselage is subtly shaped and not easy to depict. Hubbell's version is not realistic, perhaps because he might not have had enough useful reference photos.
Posted by Donald Pittenger at 1:00 AM