A faithful reader of this blog recently suggested that I write a post dealing with sculptures at New York City's Rockefeller Center.  Fine idea.  Below are images from when the center was new along with some color photos I took on various visits.

The style used by the various artists is what might today best be called Moderne or Art Deco.  In the 1930s when the work was done, the works were simply fashionable, up-to-date sculpting in tune with the architecture of the development. 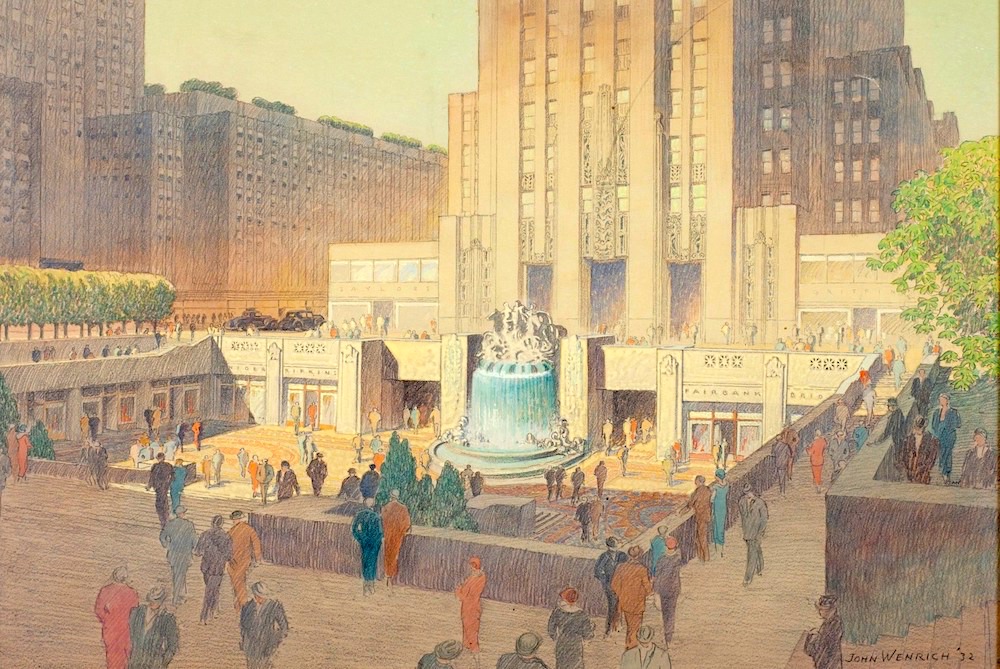 Architectural rendering of lower Rockefeller Plaza by John Wenrich, 1932.  At the time this was made, it seems that decisions regarding the sculpture at the fountain and the decorations over the entrance to the RCA Building behind it had not been made final.  So Wenrich probably used his imagination regarding those details. 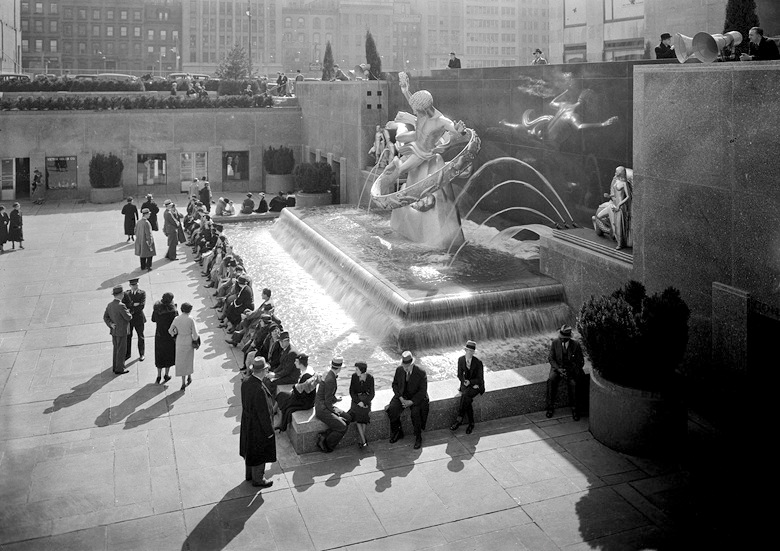 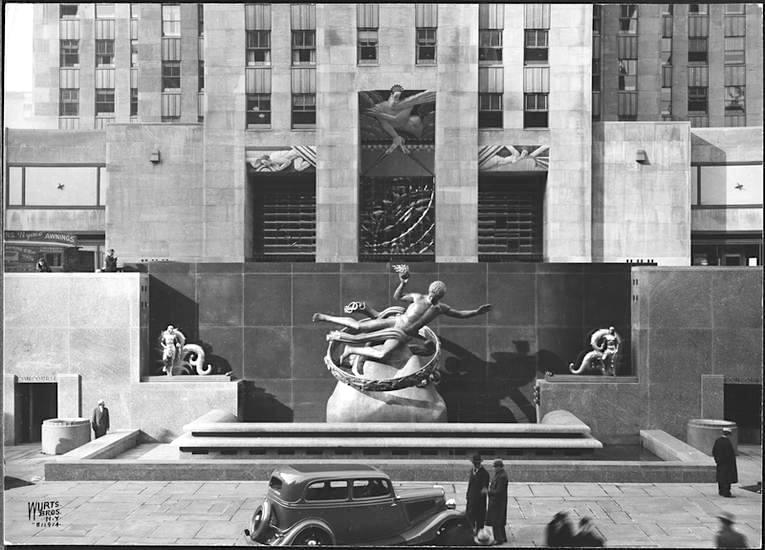 Prometheus in the foreground along with two adjoining works that are no longer present.  In the background is the main entrance area of the RCA Building with sculptural items by Lee Lawrie. 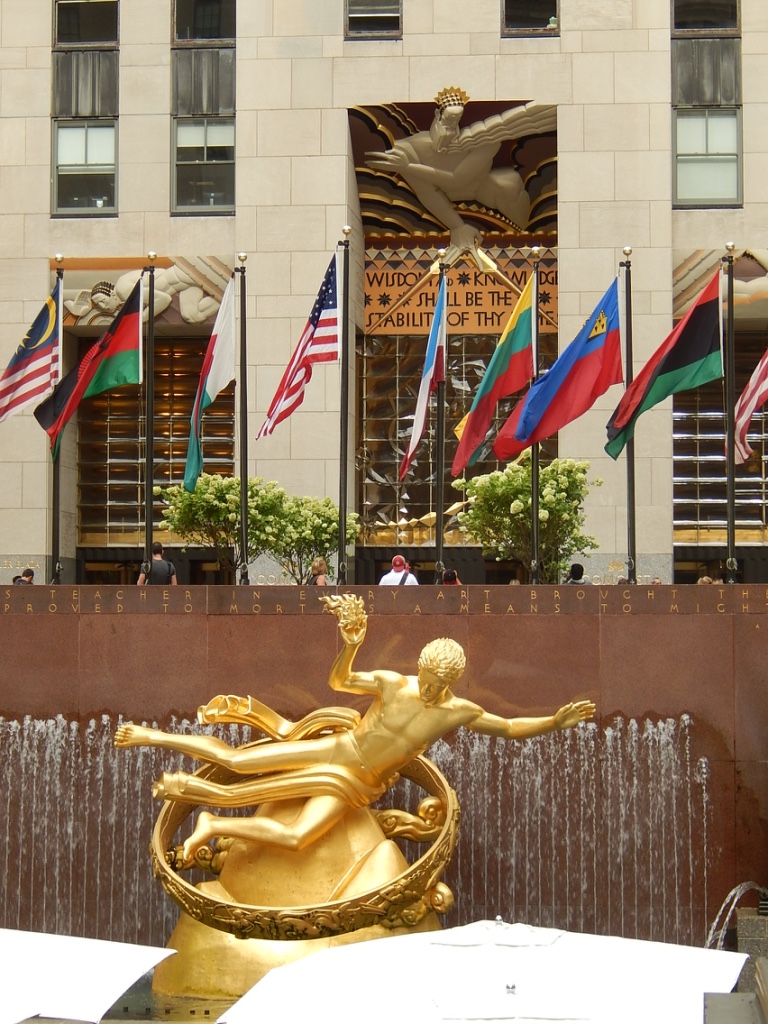 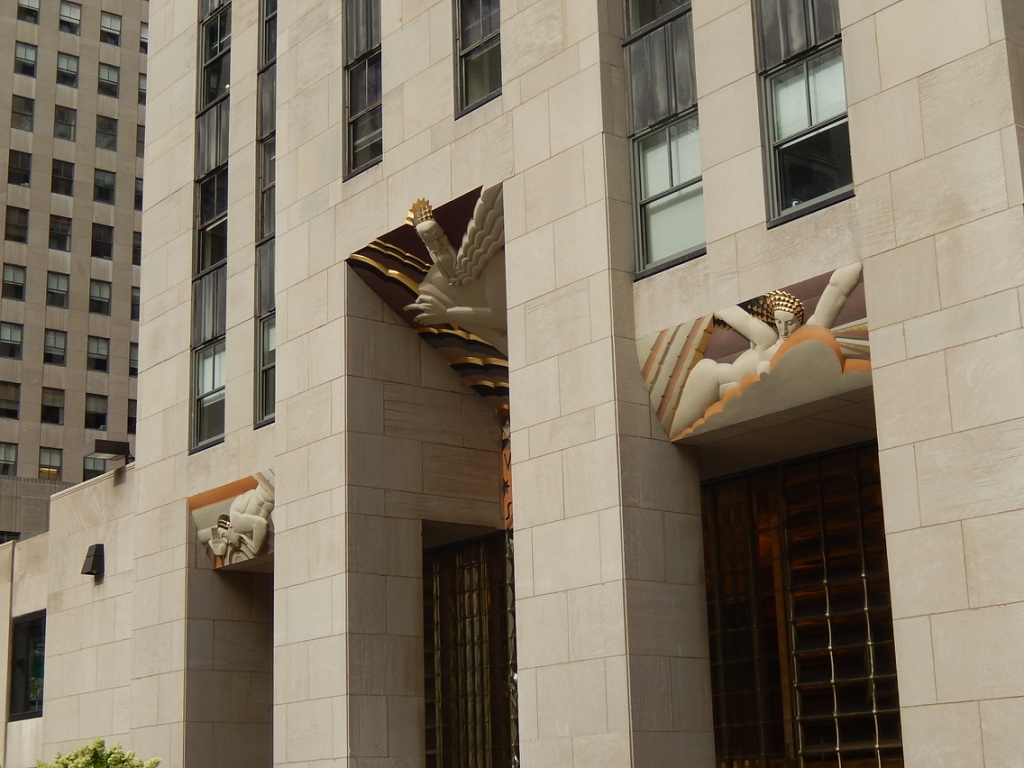 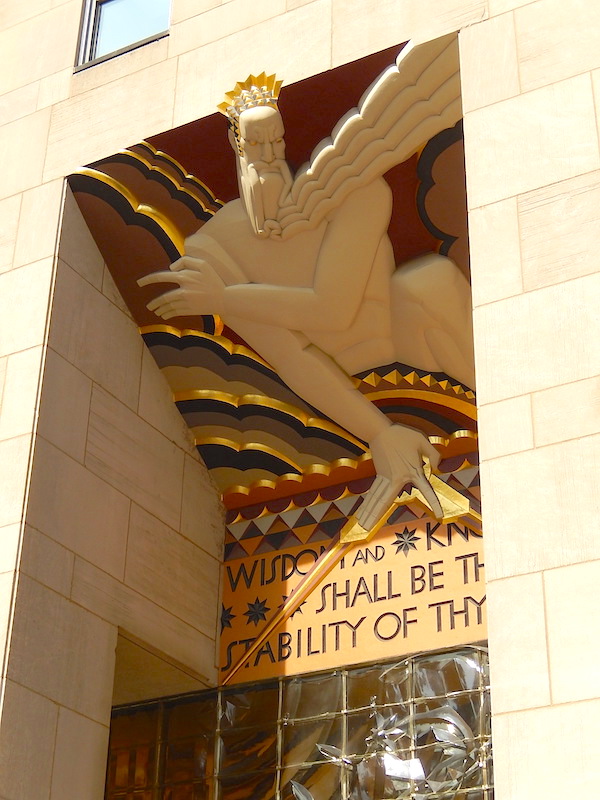 This is now called "Wisdom."  Originally it was "Genius."  Or more precisely, "Genius, Which Interprets to the Human Race the Laws and Cycles of the Universe, Making the Cycles of Light and Sound." 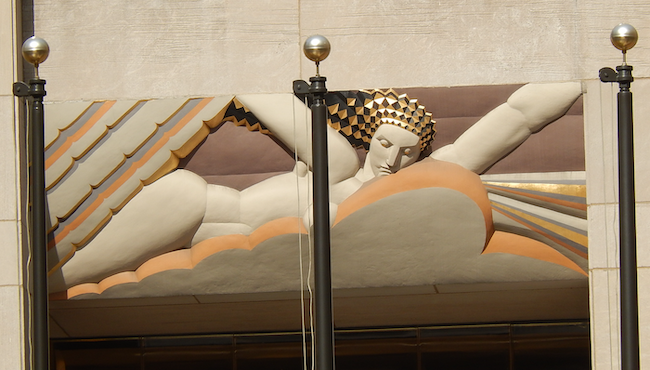 Flanking Genius are "Sound" (to the left) and "Light" (to the right, shown here). 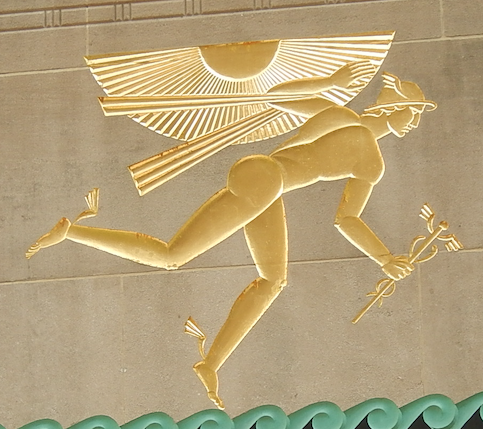 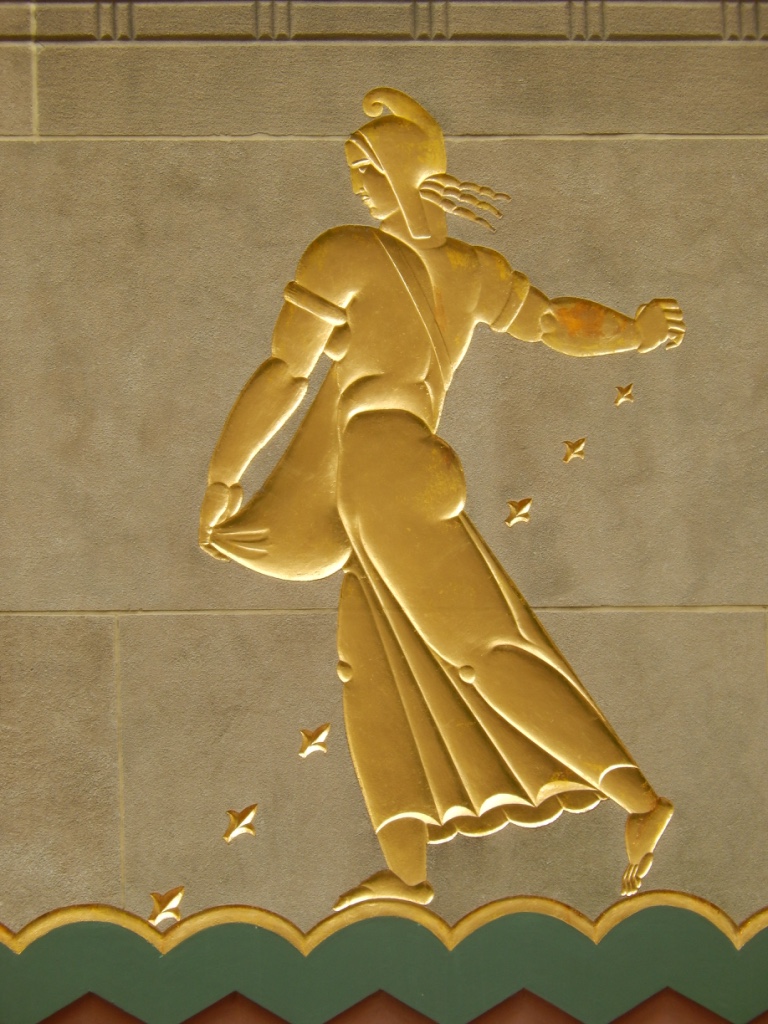 Also by Lawrie, but on the Maison Française, "Seeds of Good Citizenship," 1937. 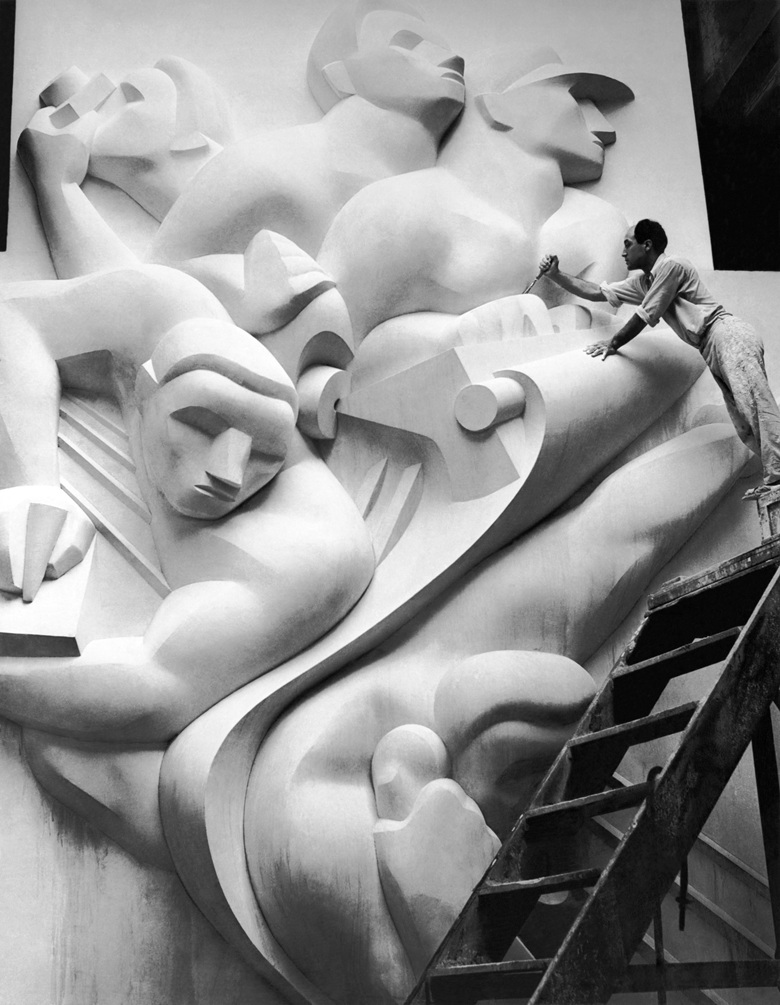 Isamo Noguchi working on the full-scale plaster model of "News" for the Associated Press Building. 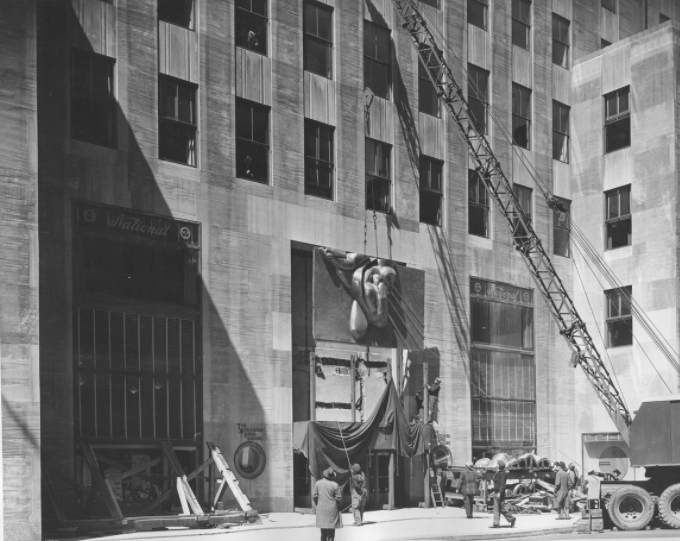 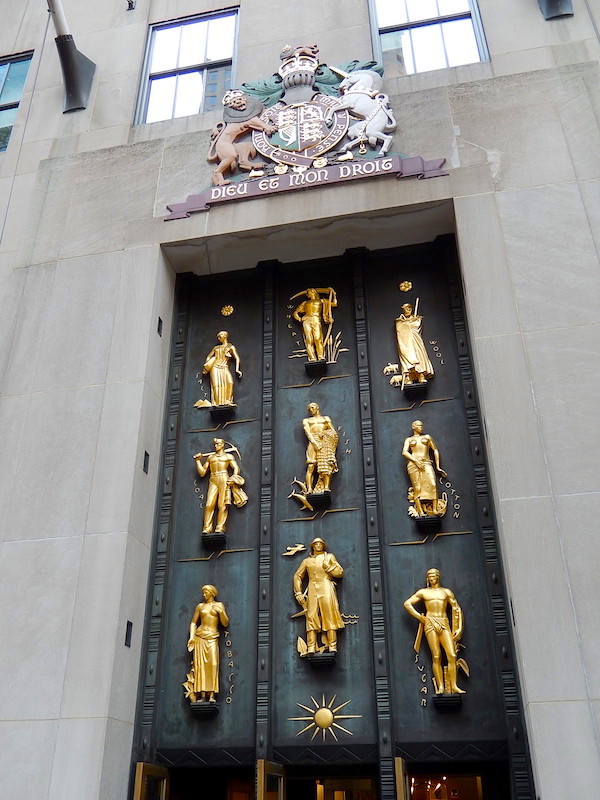 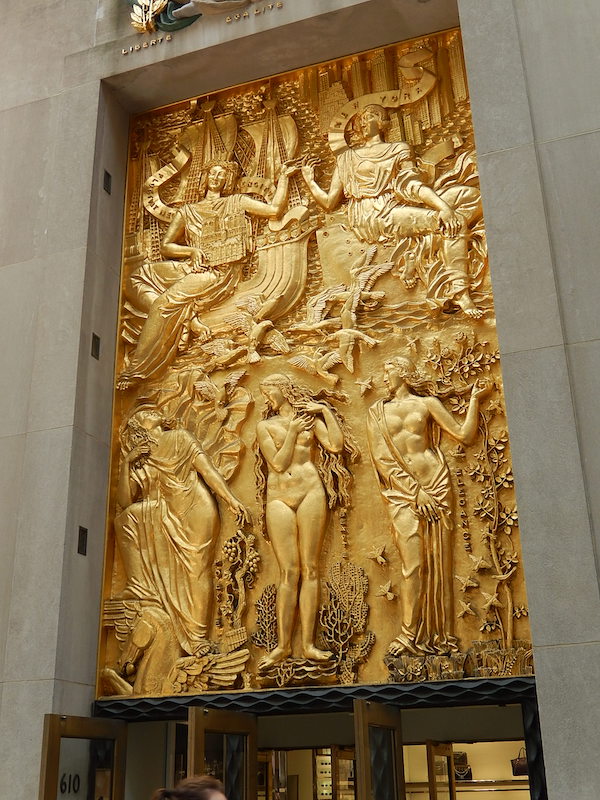 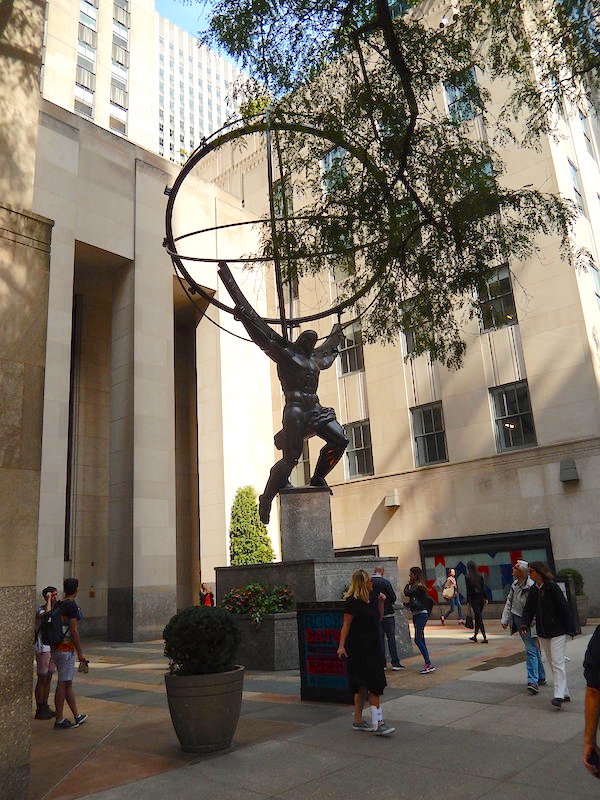 Besides Prometheus, the best-known Rockefeller Center sculpture is "Atlas" at the front of the International Building, Lee Lawrie sculptor. 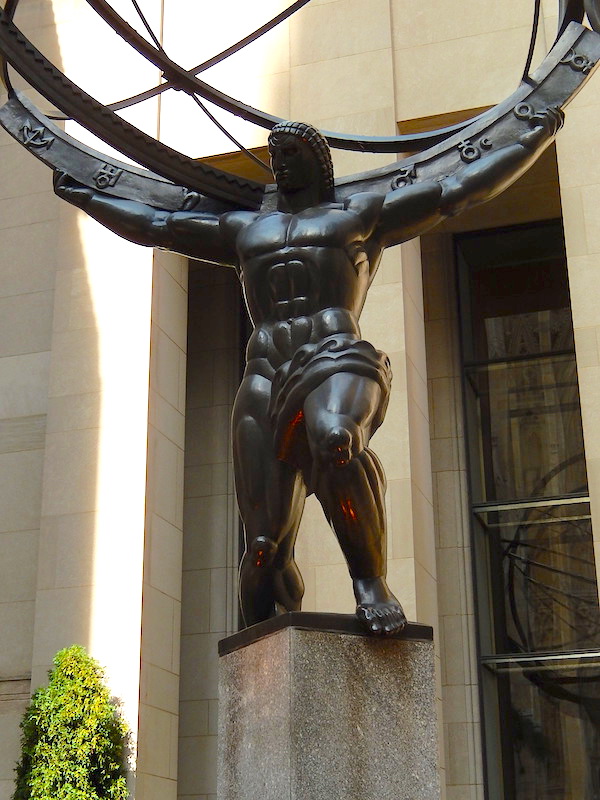 Atlas closeup.
Posted by Donald Pittenger at 1:00 AM

DP—This is not only an excellent post it is a very thorough one. You have presented the wide variety of great Art Deco works that adorn Rockefeller Center. The Center is a master piece of planning and a showcase of Art Deco art.

Personally, I think it is too bad that Art Deco became a style of the past. The simplicity and power of Art Deco lent itself easily to expressions of contemporary thought and ideals. No doubt its disappearance had a lot to do with the sweeping changes of the aftermath of WWII, especially the changes in architecture. Sterile glass and steel versions of building design had little room for personal expression or adornment. However, the lingering influence of Art Deco is still seen in the design of much of the world around us.—Paul Sullivan

Paul -- Thank you for you kind thoughts.

I agree that Deco/Moderne was a fine style, though perhaps I might have been influenced when I was young when there were many vestiges of 1930s art, architecture, décor and such still lingering. For that reason I've always considered it a reasonable style and not some kind of artifact from the past.

Much later I came to appreciate Art Nouveau, mannered though it can be. It, Deco and the transitional style make for an interesting combination that forms a unique non-Classical, non-whatever they're doing now aesthetic system. I think I'd better write a post about that.

Uh-oh, subcontent India spam is showing up here and on the Car Style blog. Anyway, now I have to go take a new look at Rockefeller Center. The News relief in particular is fantastic and I've never seen it. Ever notice the grids on the ground around the sidewalk trees?