Dennis Ziemienski (b. 1947) paints images that I think are both fun and interesting.  That's because they are a form of Retro, evoking 1920s and 1930s western America.  A lot of the original images of this kind were still around when I was a boy, which might well be why I like Ziemienski's work as well as paintings by some other artists who do similar things.

There isn't much biographical information about him on the Internet.  A snippet on his Web page is here, and a litle more about him is here.  The former link inlcludes this: "His strong and richly colored images borrow much of their inspiration from early 20th century paintings and posters."

Ziemienski's painting have a posterlike look, a purposeful appearance that he could easily bring off in part because earlier in his career he was a commercial artist.

Carhop
For non- North American readers, a carhop was a girl who delivered food to customers in their cars parked by a drive-in restaurant.  The green car closely resembles a 1941 Dodge. 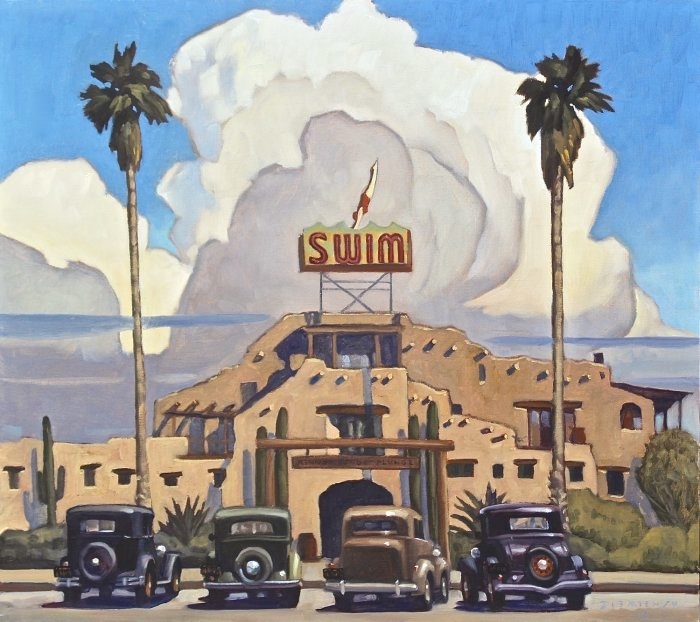 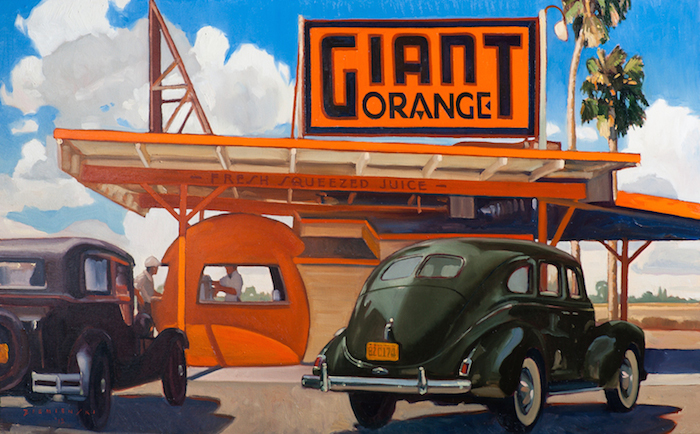 Giant Orange
There were orange juice stands like these in California as late as the early 1950s, though I'm not sure of their brand name. 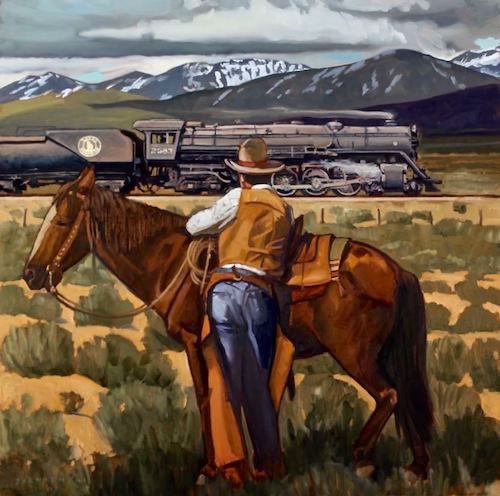 Great Northern
The Great Northern Railroad was the most northerly line between Chicago and Seattle, so this scene hints at being just east of Glacier National Park. 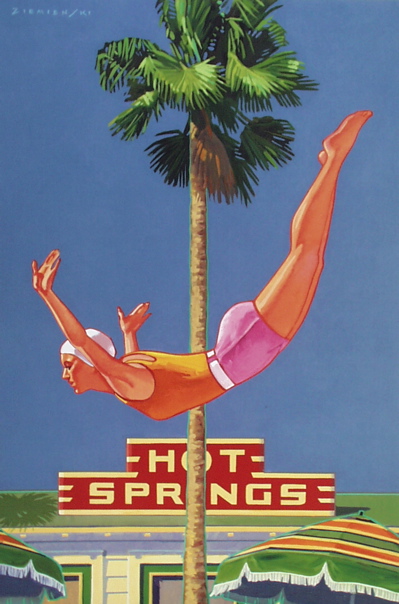 Hot Springs
The bathing suit style is from around 1932. 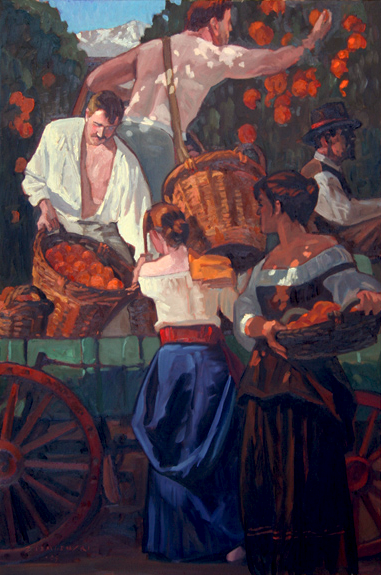 Pasadena Orange Harvest
This evokes the early part of the 20th century. 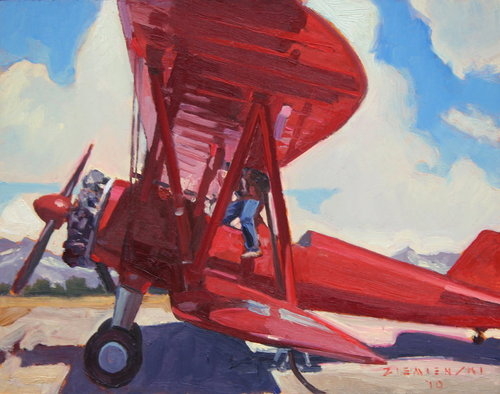 Red Biplane
I haven't done the research to find if this was an actual plane or something Ziemienski made up. 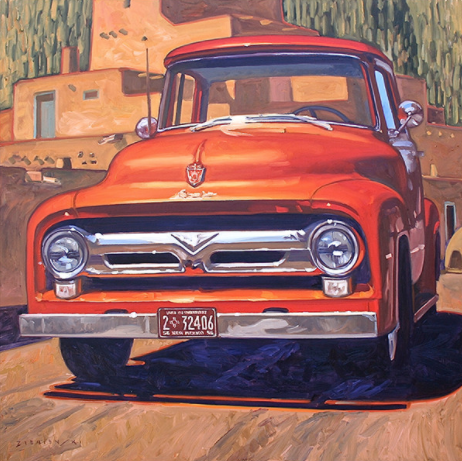 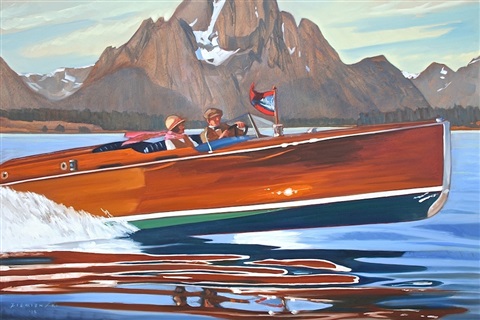 Speedboat
This might represent Lake Tahoe in the 1920s. 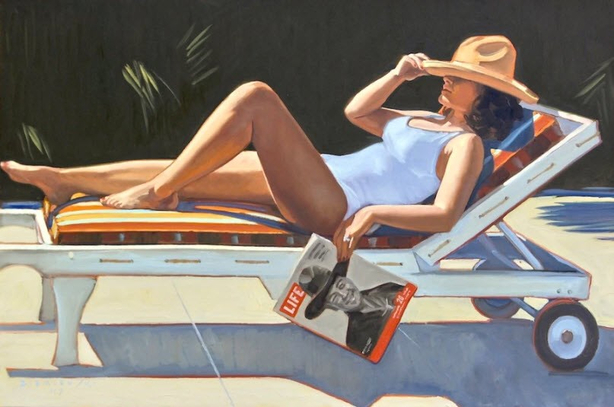 Western Lounge
Note the Life Magazine cover, dating this roughly from the late 1930s well into the 1940s.  I don't know if that was an actual cover photo. 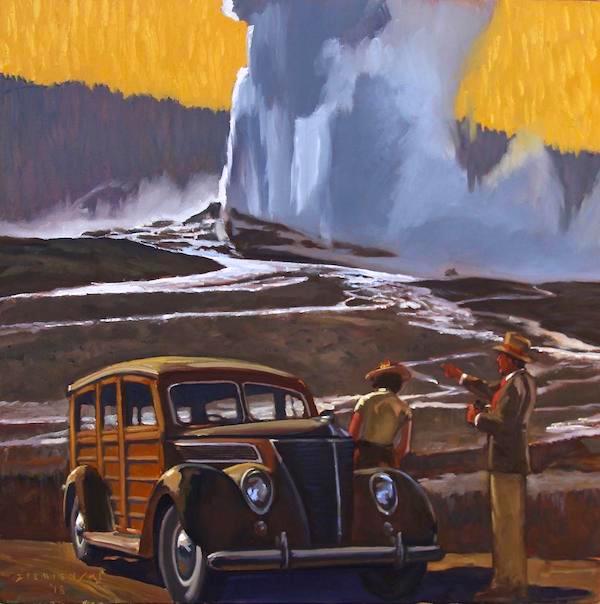 Yellowstone from the Station Wagon
That's a 1937 Ford.
Posted by Donald Pittenger at 1:00 AM

Red Bi-Plane is a Stearman...

The orange juice stands (at least two that I have seen at the time) were still extant in the late 60s early 70s. I think Giant Orange is correct.

The Life cover in the painting is Hopalong Cassidy (William Boyd) at the height of his TV and movie popularity. I’m a thousand miles from my archives, but I almost certain the date was sometime in 1949. I enjoy this site immensely.