I posted a "Towards the End" topic dealing with Pablo Picasso (1881-1973) and his post-1950 paintings here. I concluded: "To my eye, there was no real stylistic progression or sense of direction over the 20 years [ca. 1950-1970] covered by the example images.... This ties into the thesis of my e-book "Art Adrift" that once the elements of modernist painting had been established by around 1920, aspiring modernists and even established ones such as Picasso had no real sense of what to do next."

My benchmark for that analysis was his Dora Maar au chat of 1941 that not many years ago was auctioned at a very high price. So my point was that he seemingly had largely run out of creative fuel by the time he was around 60 years old.

Which leads us to the present post that deals with some of his paintings from the late 1920s into the early 1940s. His stylistic changes are shown with an eye towards both his previous and future work. 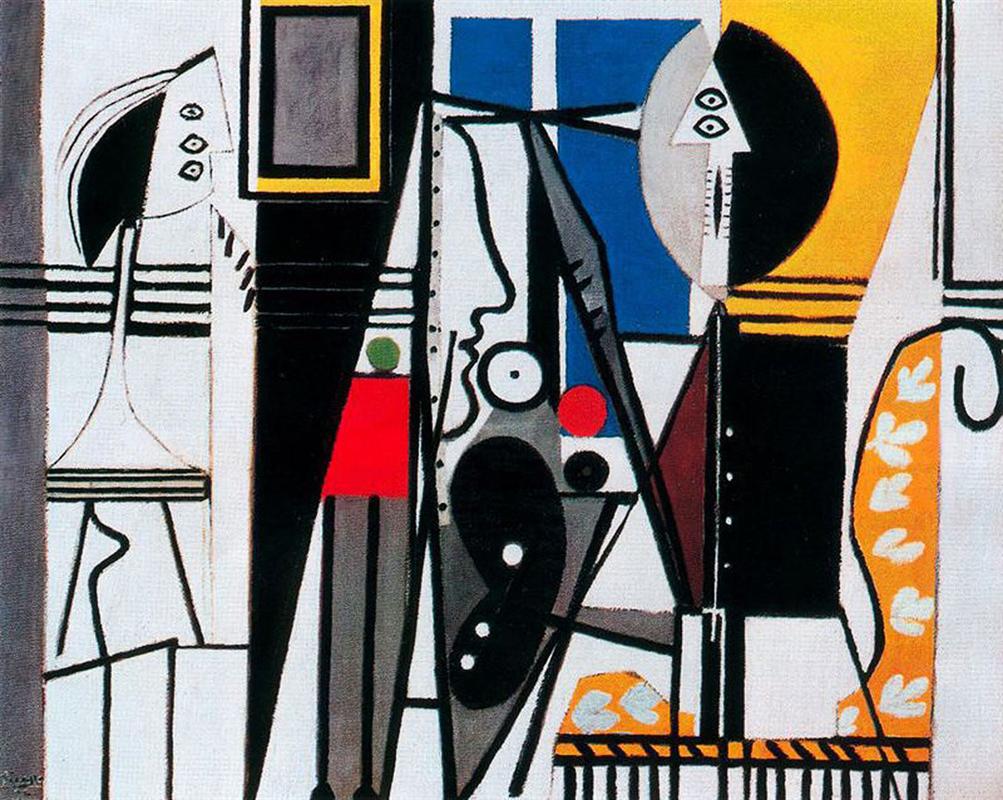 Painter and His Model - 1928
Very flat, largely primary colors with black lines on a nearly-white background. These features are Piet Mondrian- like, absent the rigid geometry. The "model" at the left has three eyes arranged vertically, a fairly early example of his radical repositioning of his subjects' elements. In a sense, this is an extension of cubist practice, but without so much clutter. 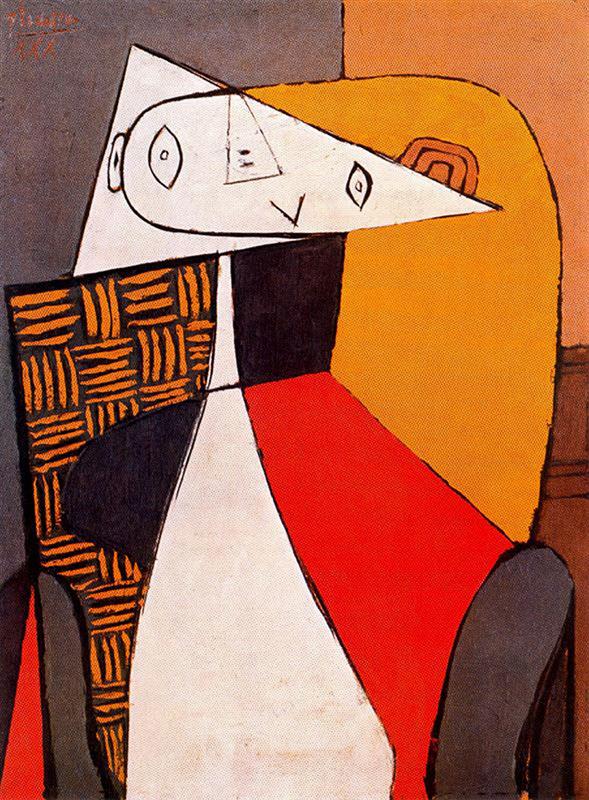 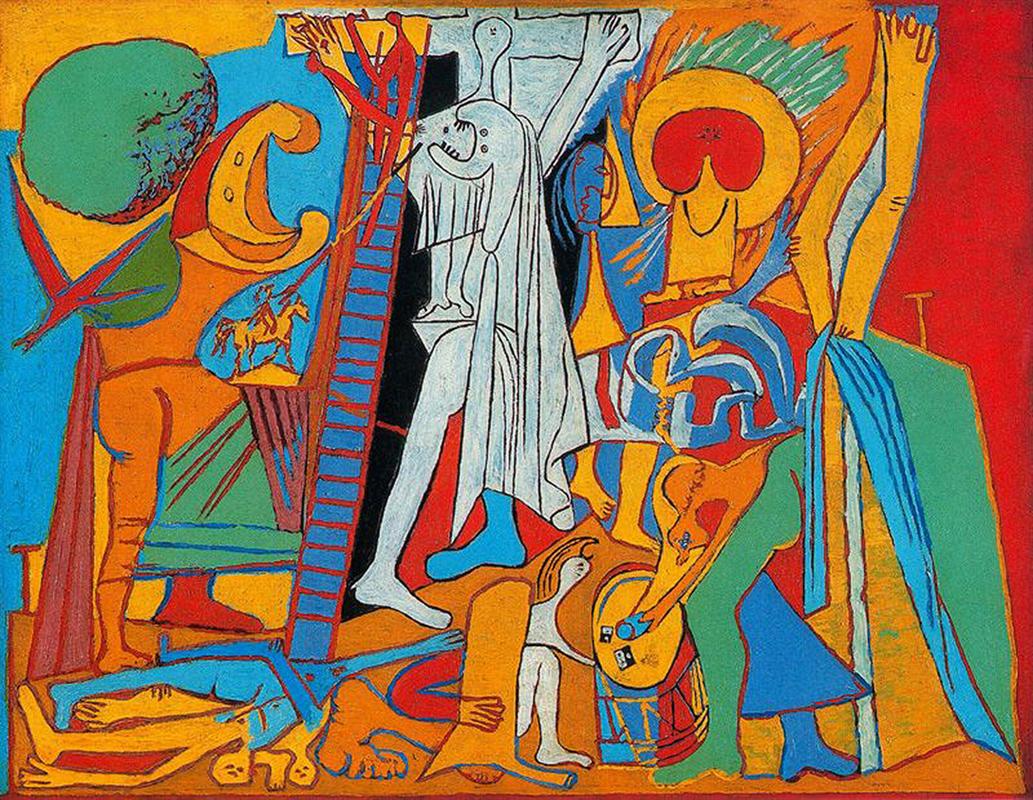 Crucifixion - 1930
More flatness along with not-quite-human subjects.  An exception is the tiny Dalí-like lancer on his horse at center-left. 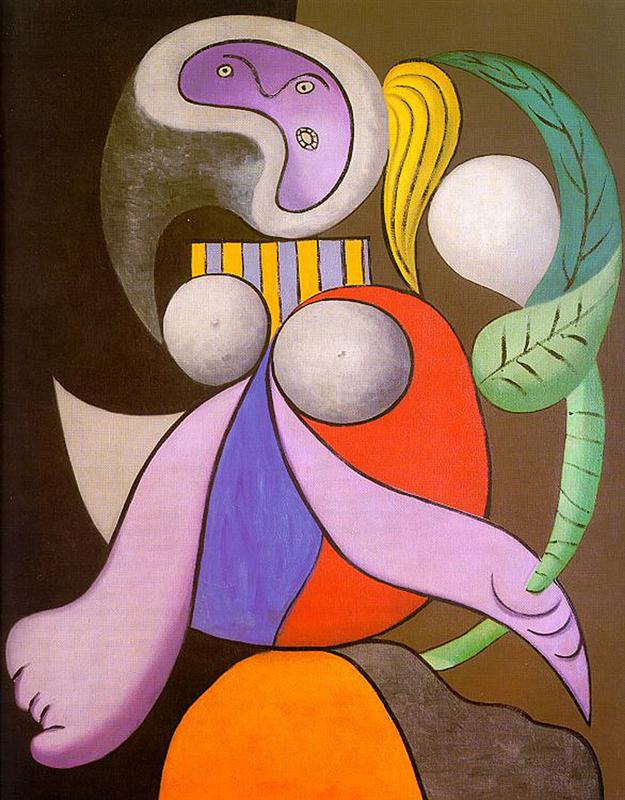 Woman with a Flower - 1932
Picasso is concerned with patterns here as well as ways of distorting the human figure. Returning is some modeling atop otherwise flat areas. 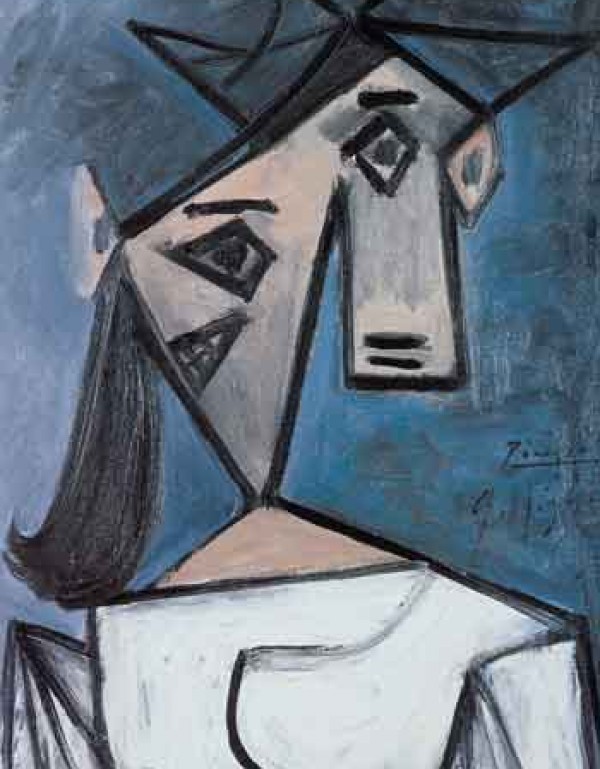 Woman's Head - 1934
He continues his exploration of distortions and rearrangements. Fortunately for Picasso, his fame had long since reached the point where his signature on a painting would almost guarantee its sale regardless of its quality. 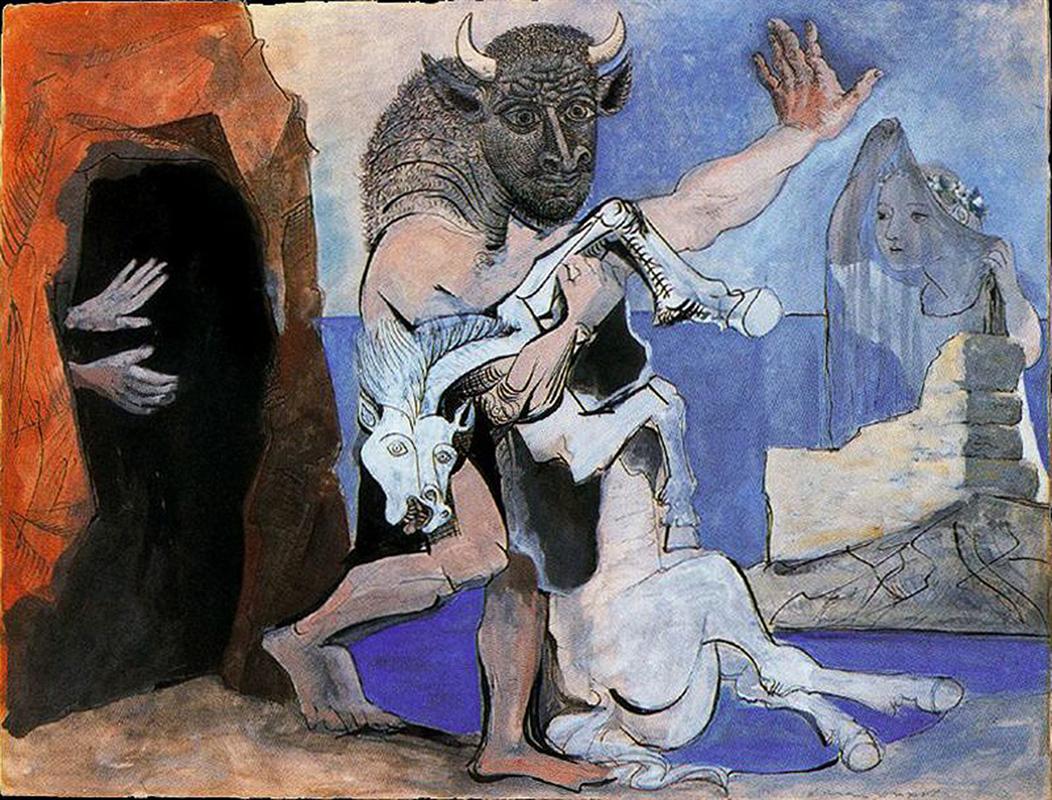 Minotaur with a Dead Horse in Front of a Cave Facing Girl in a Veil - 1936
He also took some time-outs to return a little closer to representation. 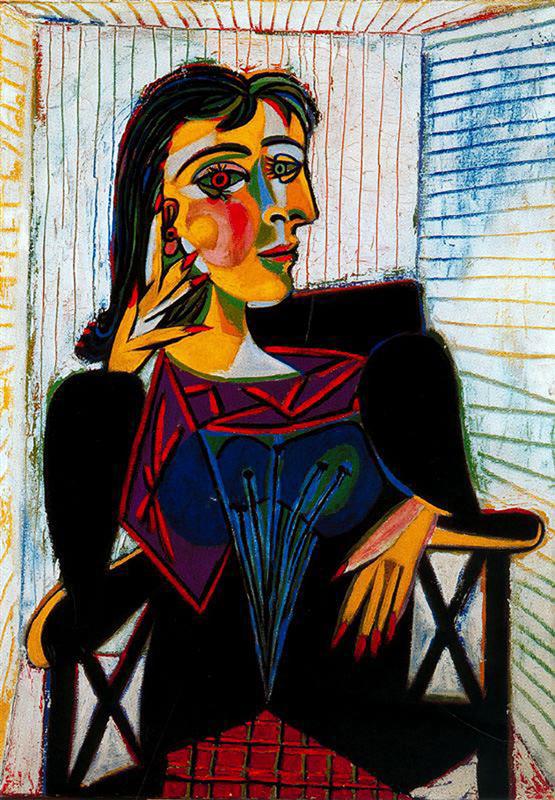 Dora Maar - 1937
Portrait of his mistress at the time he painted his famous "Guernica." Flat areas of 1930 vintage are gone while he continues playing with post-cubist rearranging. 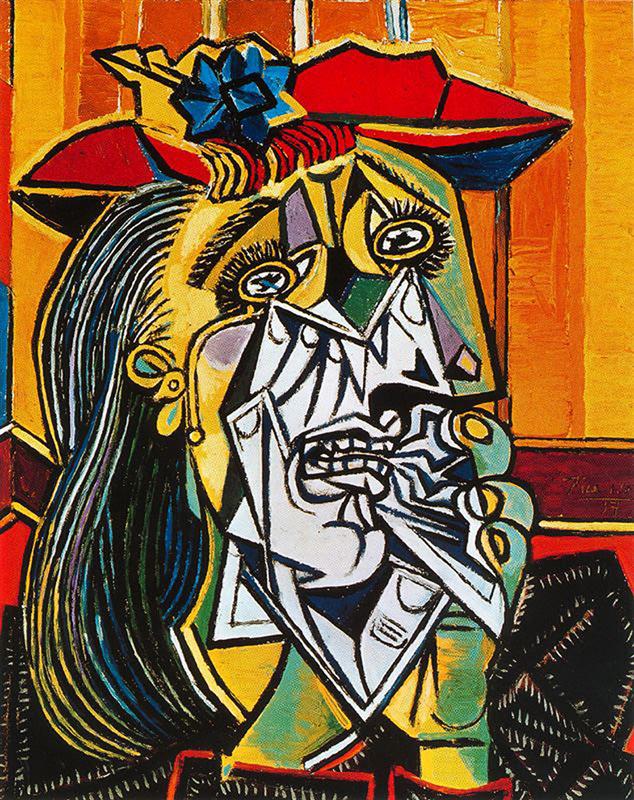 Weeping Woman - 1937
Here he tries leaving a segment in monochrome where a handkerchief might be. 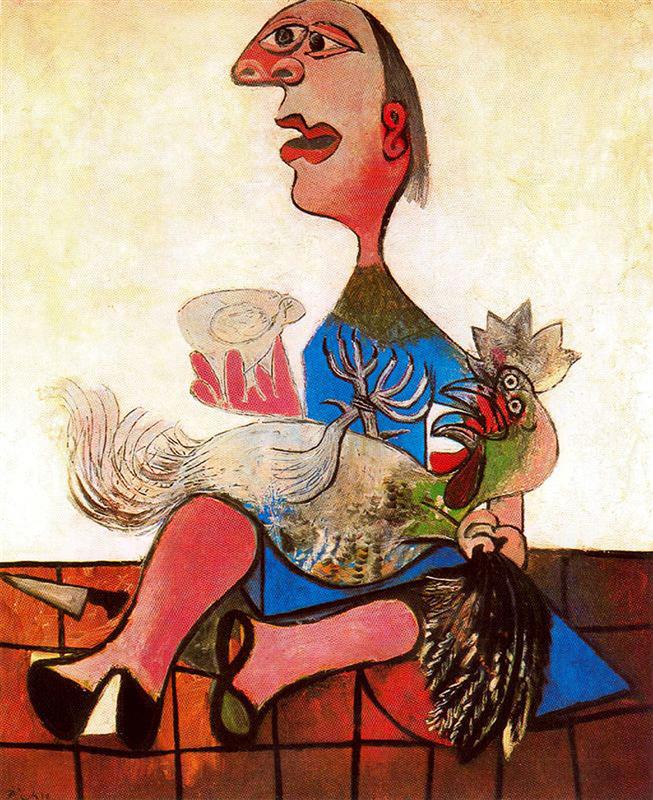 Woman with Cockerel - 1938
Continuing his exploration of distortion, rearrangement. 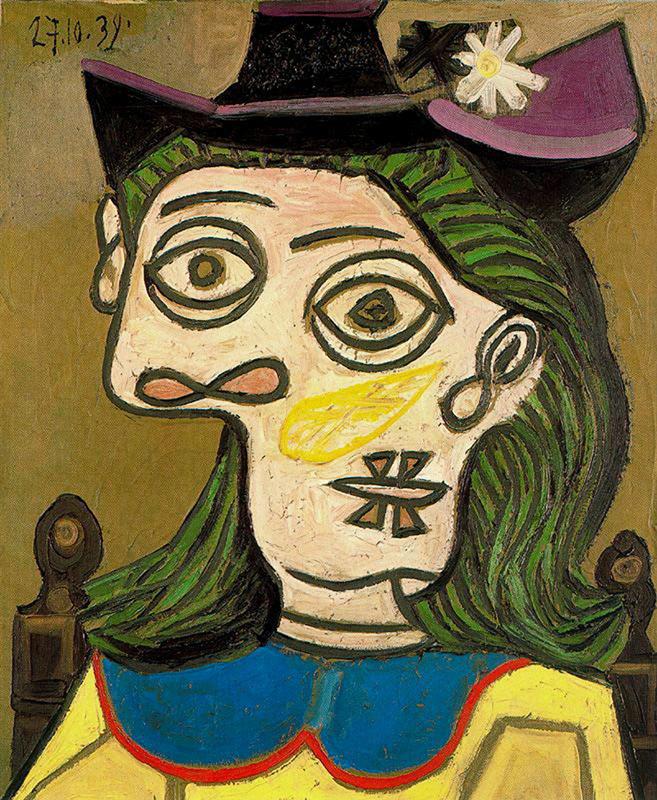 Dora Maar - 1939
A return to flatter areas and heavy lines. I wonder what Dora thought of this one. 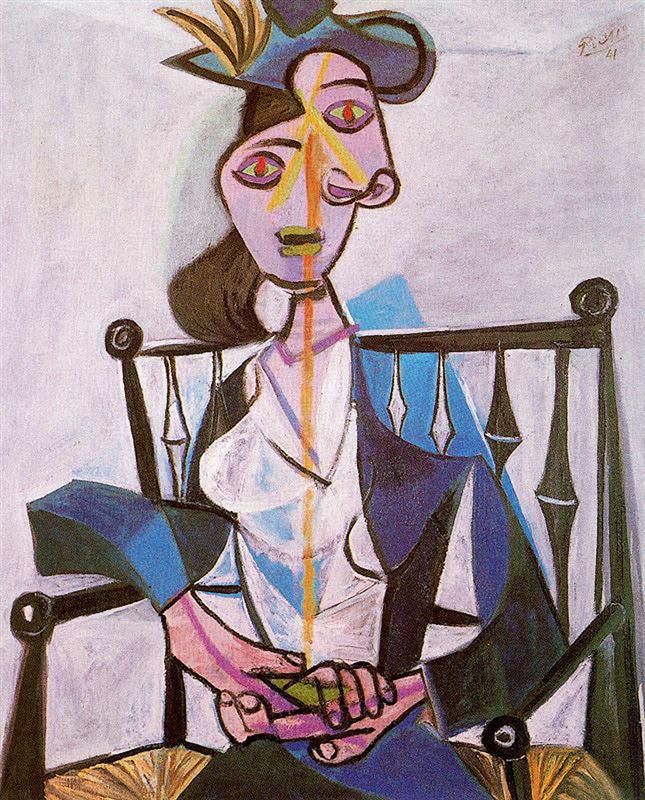 Seated Dora Maar - 1941
Two years later, Dora is still around, and so are Picasso's late-1930s concepts.  To me it seems that he had largely run out of new stylistic ideas by that time and was settling into the long period mentioned in the link above.
Posted by Donald Pittenger at 1:00 AM