Eugene Francis Savage (1883-1978) was a muralist and academic whose major works were made in the late 1930s.   His Wikipedia entry is here.
Nowadays he is best known for a set of murals featuring scenes from Hawaii and its history.  But he painted other murals and paintings, some of which are shown below.

His style was clearly in the 1930s Moderne vein, where a touch of subject simplification was expected. 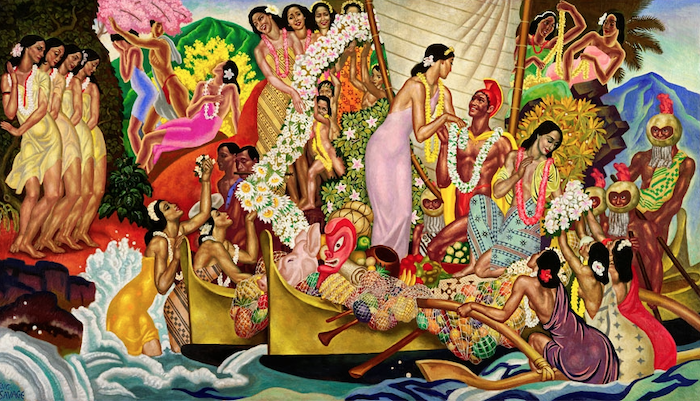 Aloha ... The Universal Word - c.1940
This is one of Savage's well-known murals painted for the Maison Navigation Company that had ocean liners such as the Lurline that plied between Honolulu and California.  On ship, the murals served as the basis for menu covers.  Standard Savage visual fare included bold, slightly simplified shaping of human bodies and stacked groups of similar people such as the group of women seen at the far left. 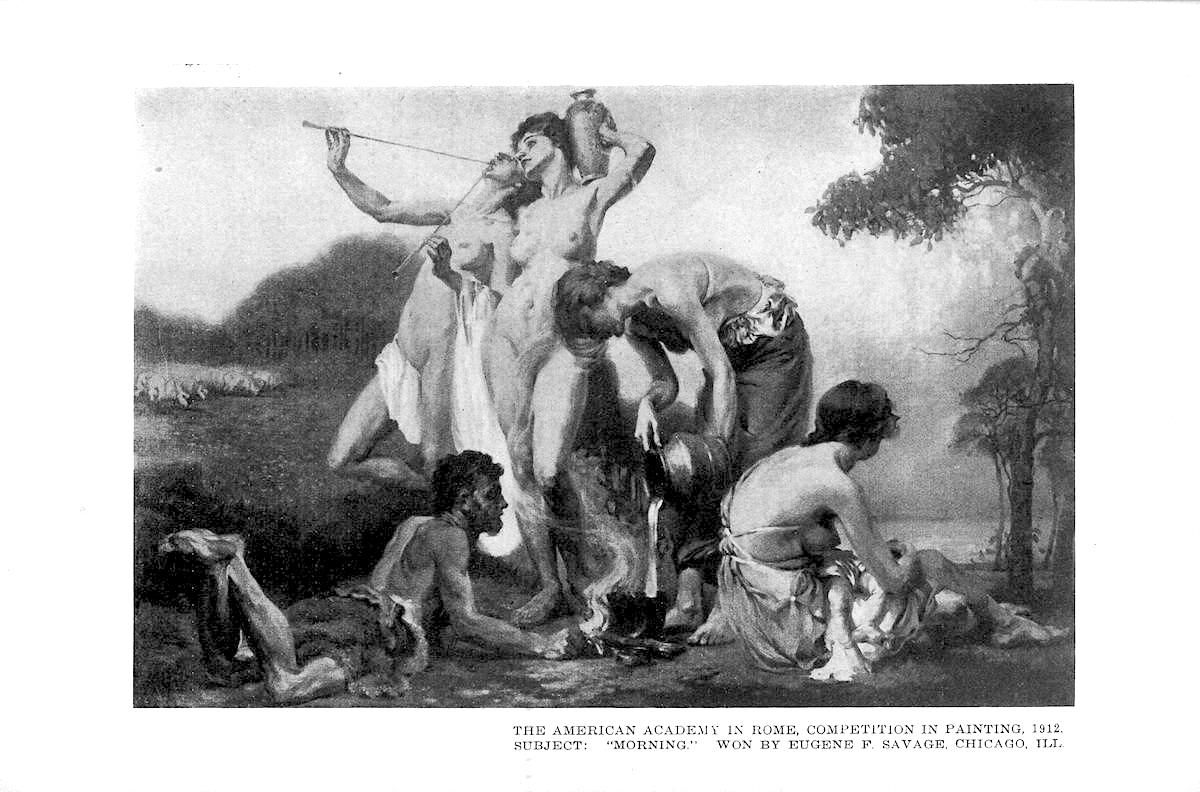 Competition painting, American Academy in Rome - 1912
Painted when in his late twenties, this is fairly traditional.  Very striking female nude, indicating that he might have taken a different artistic path than the one he chose. 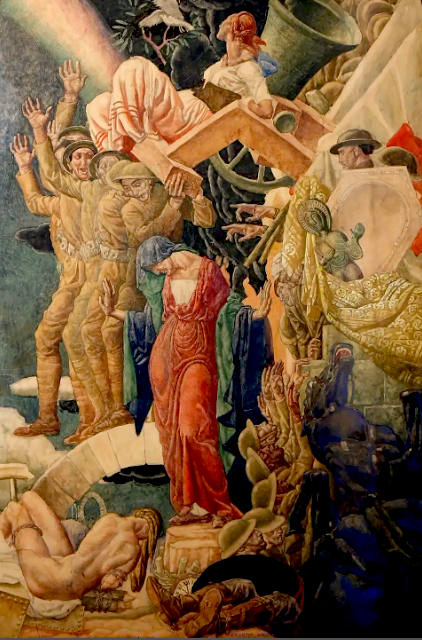 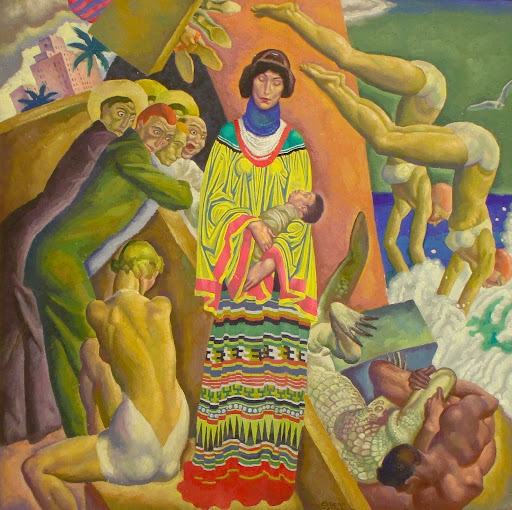 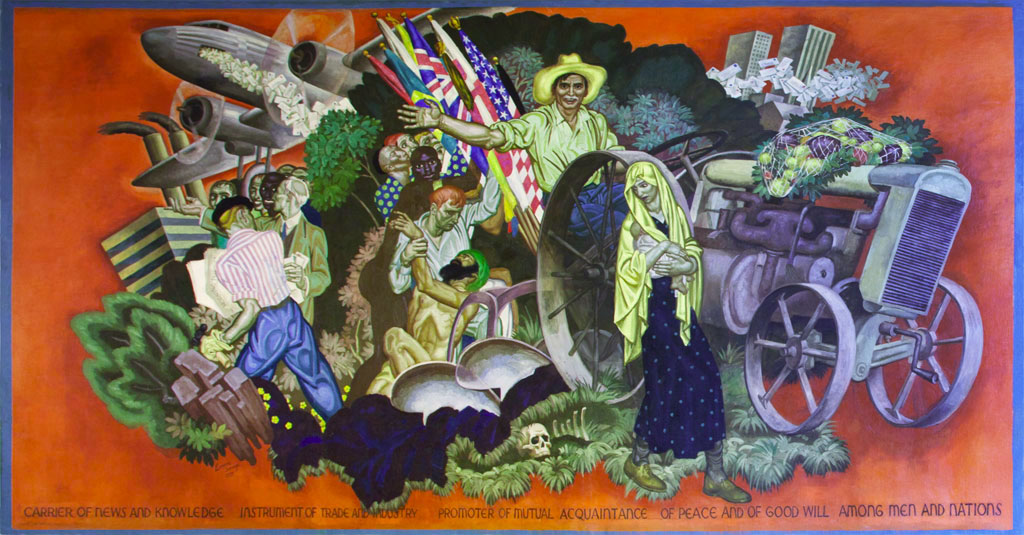 Carrier of News and Knowledge - post office mural - 1937
Even though Savage was on the Yale University faculty, he seems to have been involved with Depression-era Federal art projects. Spirit of Oshkosh - mural study - 1937
Oshkosh is a city in Wisconsin, and this might be a study for a post office mural intended for that place. 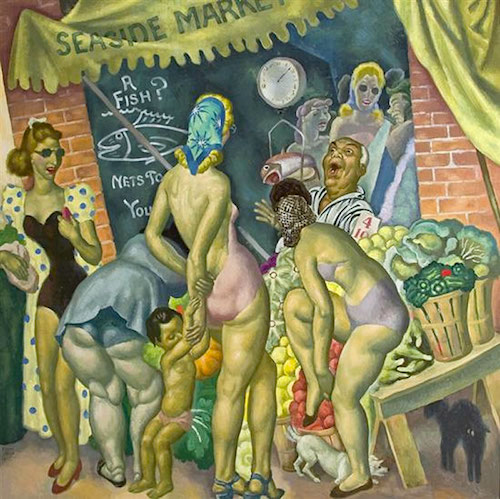 Seaside Market - 1942
Not a mural, I suppose.  But a genre painting in the spirit of 1930s artists such as Reginald Marsh and Paul Cadmus.  Perhaps a view down Savage's nose from the heights of Yale University.

Spirit of the Land Grant College - 1961
A comparatively late work.  It retains much of his late-1930s feeling -- though a bit simplified and lacking the stacked groups of people.
Posted by Donald Pittenger at 1:00 AM

I was wondering what the Biscayne Holiday one could possibly be about. Turns out it's one of three SEMINOLE DREAMS OF FLORIDA PAST.