I'm back from Spain, Portugal and Morocco. And still wiping the jet lag cobwebs from my brain -- but post, I must.

For starters, here are two slogans I came across: 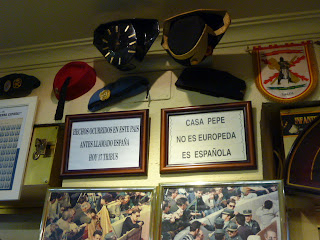 This was taken at Casa Pepe, a road house just off the Autovia between Granada and Madrid. Pepe seems to be a huge fan of General Franco, the late Caudillo of Spain (I'll have more on Pepe's place in another post.) The slogan on the sign to the right can be translated as "This is Spain, not Europe." 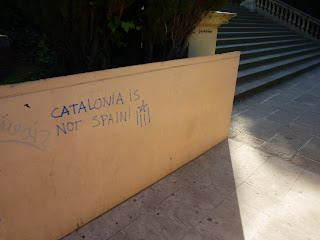 I noticed this in Barcelona between the Plaça d'Espanya and the Museu Nacional d'Art de Catalunya. It's in English, presumably to get the message across to a wide foreign audience. Catalunya (better known to English speakers as Catalonia) is a region in northeastern Spain that has its own dialect which is slightly similar to dialects in southern France. Not all Catalonians consider themselves Spanish, it seems.

Posted by Donald Pittenger at 5:28 AM