European cities that had late 19th century growth spurts bequeathed us buildings and even entire neighborhoods in Art Nouveau architecture. There are a some exceptions that come to mind: London and Berlin aren't known for that style. But Barcelona definitely falls into the Art Nouveau camp.

I'll have more to say about exteriors later, but for starters will begin with an interior -- that of the Palau de la Música Catalana. 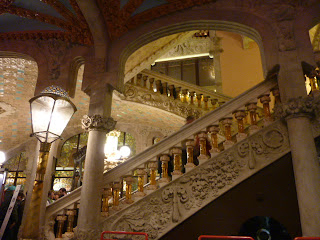 This is the grand stairway. Not nearly on the scale of that of Paris' Opéra Garnier, but what else is? 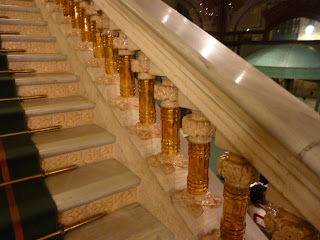 A detail shot of the banister. Note that the little pillars are made of glass. 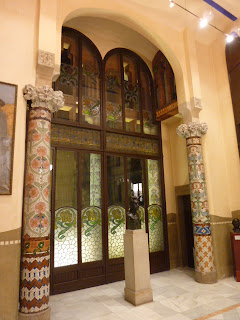 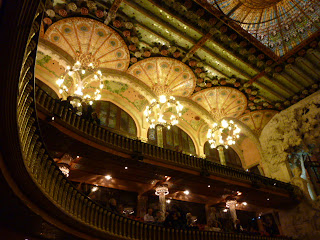 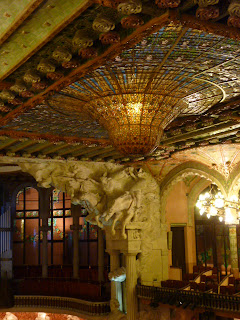 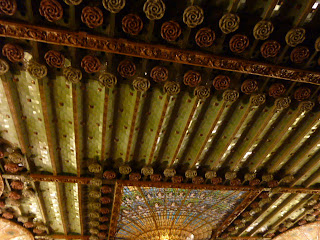 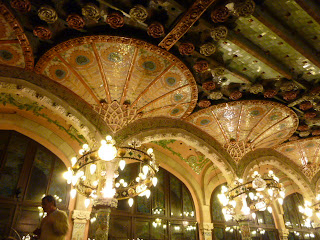 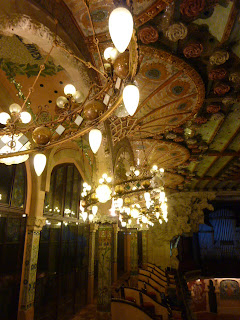 Above are views of ceilings and light fixtures. 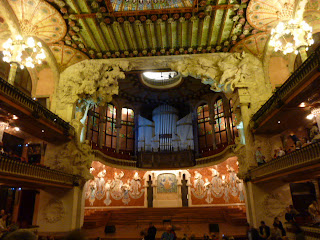 Here is the stage area. Note the sculptures below the organ: detail photos are next. 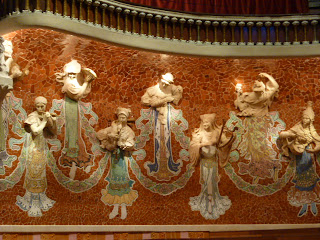 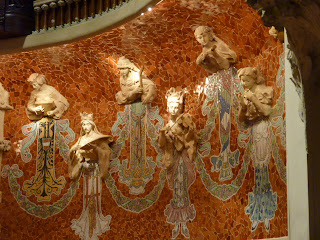 Can there be such a thing as too much decoration? Modernist theorists of the early 20th century held that ornament of any kind must be avoided; Adolf Loos went so far as to equate ornament with a sort of crime.

I take the position that ornament can serve as a link to human predispositions formed by evolution in nature settings -- that we are attuned to the vegetation tangles of the natural environment in non-Arctic, non-desert places.

Moreover, ornament can be functional in theater interiors. This is because it provides a distraction for audience members waiting for a performance to begin. The grand movie houses of the 1920s had all sorts of carvings of treasure galleons, Egyptians tombs, Roman forums and any number of other items depending on the theater's design theme, to entertain waiting patrons. Today's stripped-down cinemas resort to flashing advertising on the screen as the audience assembles.

To return to the question posed, I have to say that the Palau is indeed over-decorated and lacks a theme for the decoration it has. But boy is it entertaining!

Posted by Donald Pittenger at 3:30 AM

Entertaining in a car crash kind of way, like the makeup-wearing old man in Death in Venice.

Ornamentation is good. Even very good, as long as it isn't too shiny for its size (a'la gold rococo tureen or ash tray with Poseidon and 3 sea horses on top!).