Malczewski: Death as a Woman


Polish Symbolist Jacek Malczewski (1854-1929) was one of that nation's finest painters. I think he should rank high on a worldwide measure because his works combine a high level of skill with the capacity to fascinate the viewer.

Perhaps unfortunately, Malczewski is best known for including himself in many paintings, often in costumes such as a suit of armor. These self-references have more to say than "Hi! It's me!" if the viewer can get past the artist's image and consider the rest of the painting. I might someday post a gallery of this phase of his work, but for now I thought I should deal with Malczewski's treatment of the symbolism of death.

In Western culture, death is often personified as the Grim Reaper, a hooded skeleton carrying a scythe. The Greeks personified death as a man, though not necessarily an old or dead one; his name was Thanatos.

Malczewski appropriated the name Thanatos as well as the scythe for some of his death paintings. But instead of a man, he depicted death as a beautiful, sometimes kindly woman. 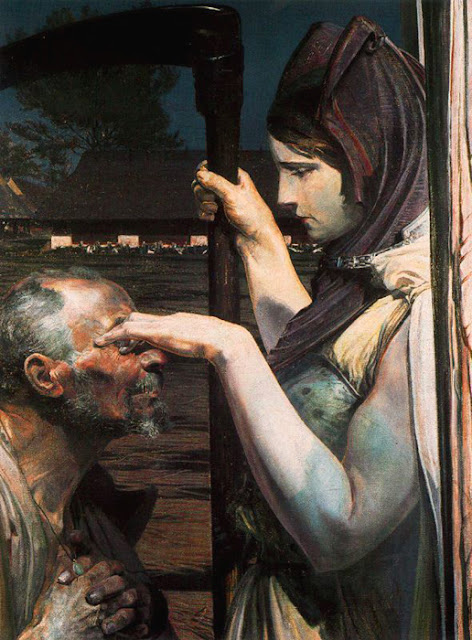 Smierc (Death) - 1902
Here Death gently closes the eyes of the man. It strikes me that Malczewski left Death slightly incomplete; note the lack of surface detail on her face in the general area of the nose. 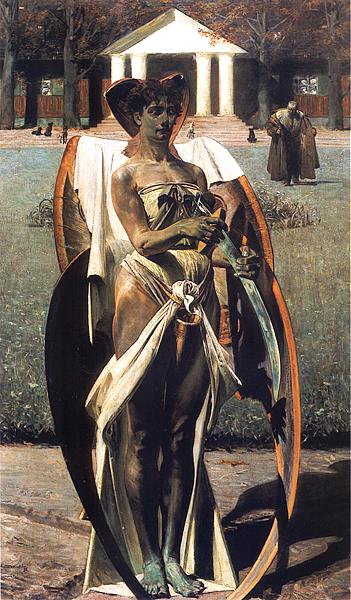 Thanatos I - 1898
This is perhaps the best-known Malczewski Thanatos. His anatomical depiction skill can be seen on the treatment of light falling on the shoulder, chest and hip. Click on the image for a better view (if your system allows it). 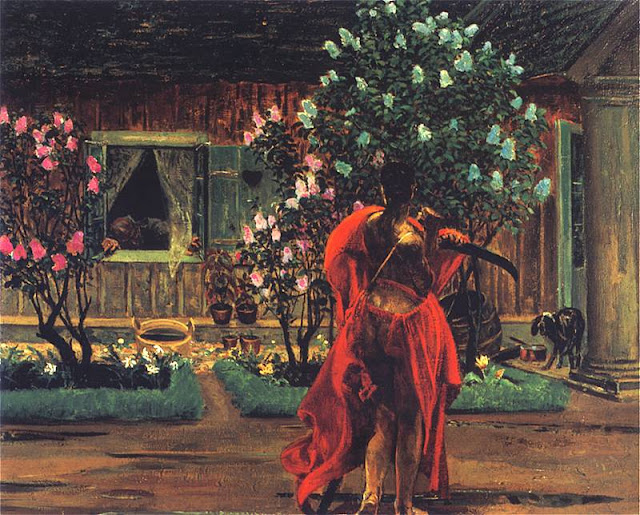 Thanatos - 1898-99
Another Thanatos from about the same time. A more dramatic scene, but not as visually interesting as the painting above. Click on the image for a larger view (if your system allows it). 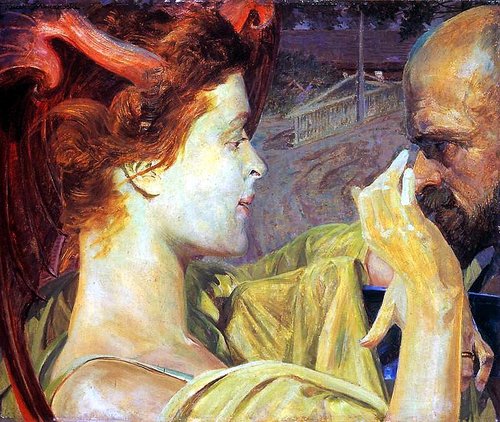 Self-Portrait with Thanatos
Some of Malczewski's self-portraits included charaters from other paintings. Here he's joined by Thanatos. Click on the image for a larger view (if your system allows it). 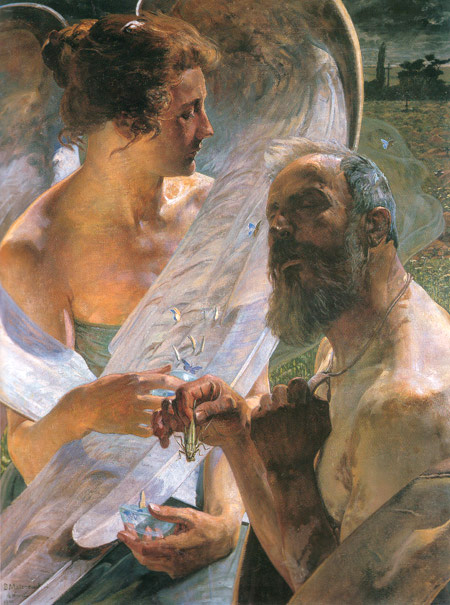 Zmartwychwstanie (Resurrection) - 1920
Later in his career Malczewski moved beyond Smierc and Thanatos to provide an up-beat note, as the title of this painting indicates. Click on the image for a larger view (if your system allows it).

Posted by Donald Pittenger at 2:46 AM

Had never heard of him before... great stuff! Thanks as always!

Kev -- Glad you liked the post. Most of Malczewski's stuff is in Poland, so one has to go there to see the important works in person. Warsaw, Krakow and Poznan each have a "national gallery" where he's well represented. I saw his paintings in the first two, but wasn't in Poznan much longer than a lunch break, so missed a couple of large-scale works that are probably worth seeing.

Seen Malczewski's originals at Kunstverein Stuttgart in 1980.
Interpretation of pictures is always very individual. Death-as-woman answers on Birth given by a woman, say Man's Earth is represented by woman.