Where Does One Build a Magic Motorway?


Norman Bel Geddes (1896-1958), a pioneer industrial designer and futurist who was famous in his day, had his fingers in many pies, as this Wikipedia entry suggests.

One of his largest projects -- perhaps his most famous -- was his huge model of how the United States might look in 1960, 21 years from the time it was created for General Motors' Futurama exhibit at the 1939 New York World's Fair. Being an automobile manufacturer, General Motors was interested in creating interest in and even enthusiasm for systems of high-speed highways that would make owning and using cars even more attractive.

I have to admit that, had I a time machine in the basement, a prime destination would be the '39 fair and GM's Futurama. Here are a couple of photos of the model: 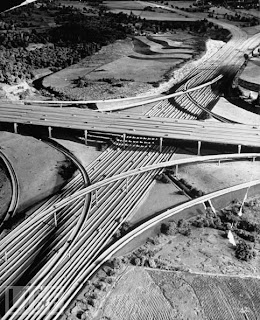 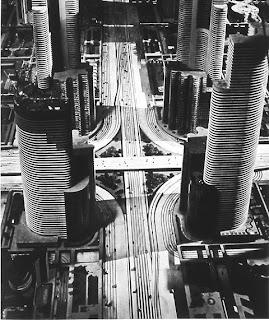 About the same time as the model was being built, Geddes wrote a book about potential future freeways, elaborating on some of his thinking behind the Futurama project. It appeared in 1940 as Magic Motorways.

I'll skip over details such as his notion that cloverleaf interchanges weren't the best answer and that extra-high-speed lanes separated from regular traffic lanes would be a good idea. Instead, today I'll consider where Geddes thought these freeways should be built. Keep in mind this was about 17 years before Congress authorized the present Interstate highway system.

Maps and Diagrams from "Magic Motorways"
Click on images for larger, sharper views. 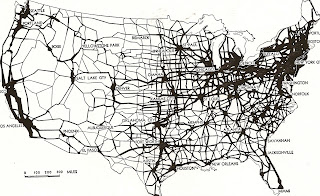 With regard to the two graphics above, Geddes writes (Page 253):"Motor traffic is expected to double in the next twenty years. The radius of traffic is also growing. In the East congestion is rapidly growing to the saturation point. To break up that congestion it is necessary to open up new ways out, to decentralize, to redistribute, to create breathing space--that is the coming need. It is a need that can be met first of all by a national highway policy." I should note that Geddes thinks centralized planning is a fine thing, a common viewpoint in the 1930s, hence his calling for a Federal solution to the problem. 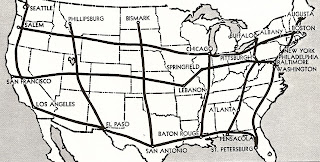 Original caption: Bulkley plan for superhighways--1938
In 1938, Senator Robert Bulkley of Ohio introduced a bill that would establish a national freeway system (see here and here for background information). The map above might have been based on support material for the bill; I don't know for sure, but Geddes does credit it to Bulkley.

The route system seems more notional than a result of serious study. Geographic considerations such as barriers (Hell's Canyon in northeastern Oregon, the Sierras south of Lake Tahoe) are skipped over. Then there are some genuine oddities. Why a freeway From Bismarck, North Dakota to San Antonio, Texas while the far more populous potential node of Minneapolis-St.Paul is ignored? And why are Phillipsburg, Montana and Lebanon, Missouri considered so important? Then there's Atlanta, connected to Pittsburgh over a lot of mountainous country while lacking a fast route along the Piedmont to Washington, D.C. and the Northeastern urban agglomeration. I wonder why Geddes bothered to include such an odd map; in any case, it's ignored in the surrounding text. 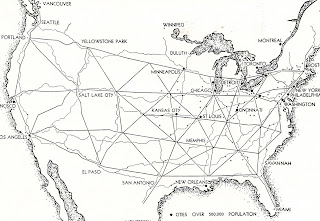 Original caption: A national motorway plan
A note to the lower right of the map on Page 278 of the book credits Norman Bel Geddes and includes the date 1939.

He explains the theory behind a curious detail of his proposed system as follows (pp 275, et. seq.):

Contrary to accepted practice, the motorways must not be laid down using cities as their terminal points, nor must they be allowed to infringe on city boundaries or the city proper.... While express motorways must be designed to carry fast, long-distance traffic, no existing roads need be scrapped. The country's 1940 roads will continue to carry local traffic, and their usefulness will be enhanced by connection with the new motorways....

The plan [shown on the map] is based on a relatively brief, preliminary study.... Its design sums up the basic requirements of such a [comprehensive] plan.

See how directly the lines lead from one region to another. Notice that a direct route connects Seattle and El Paso--making possible uninterrupted travel from the northwest tip of the United States to the southernmost section.... Nowhere do the cities connect the motorways, although they are all fairly close to them.... Traffic moves in almost a straight line from Boston to New Orleans without passing a single city. Yet no city of over 100,000 is more than 50 miles from a motorway and most of them are half that distance.

Look at the northernmost motorway, which runs east-west across the top ties of states.... [It] avoids Grand Rapids by 35 miles, and makes straight for Lake Michigan. At this point the lake is 50 miles wide. Never mind. There is no let-down on the motorway. It shoots directly across the lake on a long bridge.


He estimates that this Boston-Portland (Oregon) route would be only seven percent longer than a direct route taken by an airliner. 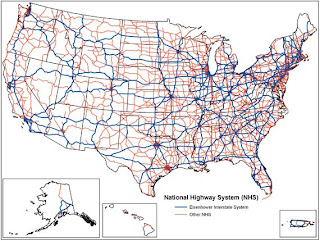 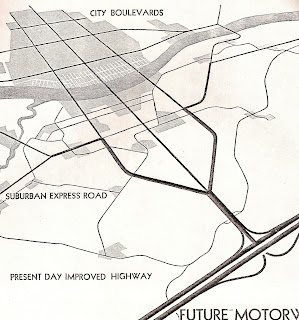 Original caption: Motorway feeder to city
Unlike his Futurama model, motorways avoid cities. The illustration above indicates how Geddes visualized connections between cities and the superhighway system.


As we know, a national system of freeways was built. City centers were not ignored in many cases. We also found that urban growth tended to occur around points where interchanges to local highways and roads were placed, something Geddes didn't consider. Or perhaps he figured that all those smart planners would ensure zoning laws prohibiting development near interchanges. Such a system can be found in Germany; one normally can't easily hop off an Autobahn to find a motel and a McDonalds. (I ought to add that Autobahnen are now getting off-highway service areas with such amenities to supplement the normal service plazas. Still, many exits to cities dump you out in the country and another ten-minute drive is needed to get you safely into civilization.)

Norman Bel Geddes had a good imagination. Even though his ideas were not realized quite as he proposed, I find them interesting to study with hindsight.

Posted by Donald Pittenger at 3:03 AM