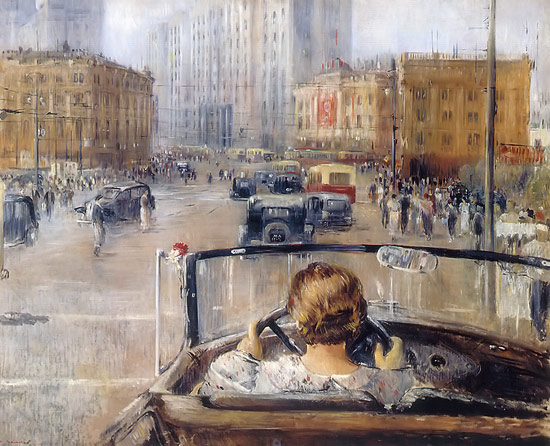 It's summertime: the sun shines and the convertible's top has been lowered. Driving is a young lady with a stylish dress and a hairdo that might have been fashionable in Moscow at the time and not all that far behind what Parisian women would be wearing.

This is in the era of Socialist Realism where artists had to toe the Communist Party line and present it in a manner accessible to the "masses." So presumably Pimenov is putting a gloss on the results of the first Five Year Plan, showing a level of material comfort found in Moscow right now in 1937!

There are other cars on the street along with some buses. Perhaps some new, tall buildings in the background. I don't recognize what street is depicted (can anyone help?), but it probably isn't far from Red Square.

Very prosperous looking. And very bourgeois for a socialist paradise.

Hmm. Summertime 1937 in Moscow. What else might have been happening that bright, bourgeois day? Oh yes. On the 12th of June that year the famous Marshal Mikhail Tukhachevsky was found guilty of "espionage" in one of Stalin's purge trials and shot in the back of his head a few hours later.

A friend had two Russian schoolgirls live with her on an exchange, back in the last days of the USSR. She took them to a supermarket. The girls scurried off around the shop, and returned separately to her to discuss what they'd seen. The lass from Moscow was bowled over - she could scarcely believe it: so much, and available to anyone. The girl from the sticks, however, was nonchalant: "we have shops like this in Moscow".

How does this painting remain so vivid with such heavy usage of white? was it sketched than painted in or is it 4 inches thick with paint? Thanks for your blog by the way, i always look forward to reading your posts - it's fun to paint with another artists work near by to imitate the way they see the colors; and your site provides that variety. thanks!

It's Mokhovaya street. On the right is Unions Buildings (yellow), tall structure in the centre is State Planning Commission building (today, the seat of Duma, Russian Parliament), Grand Hotel (demolished in 1969) is on the left and behind it stands Hotel Moskva (demolished in 2000s and built again from scratch).

Lord K -- Thank you for the info. I'll dig out a Moscow map when I get back to Seattle and see if I was ever in that part of town.

I've been to Moscow two weeks ago. Been on Mokhovaya, too - but no photos from there, sorry. The weather wasn't fair for photography.

You completely do not understand this of this picture. It is not a real Moscow street. These bulidings are cited from different places of Moscow. First answer some questions:
1. What is the year?
2. Why cars (not public transport) are so similar?
3. Is it possible that so young lady drives such a nice cabriolet this year, this city?
4. What can You see in the mirror?
And change Your interest into TV soap operas or TV commercials.

I think anon. above doesn't understand the picture. It IS a real Moscow street- Teatral'nyi proezd leading to Mokhovaia ulitsa! Though obviously an idealised vision of the future also (that's what socialist realism is!) The tall building on the right is now the State Duma, the yellow building as Lord K said is the house of unions, where Lenin & all the Soviet leaders after him lay in state before the procession to his mausoleum, also the location of the Moscow Show Trials 1936, 1937 & 1938. Once she passes those buildings Red Square & the Kremlin are just to her left. If the driver of the car were to glance to the right at this point in her journey she would see the Bolshoi theatre decked out at this time probably for Pushkin celebrations, to her left she would see the statue of Marx, in her rearview mirror she might just be able to have made out the Lubyanka, home of the NKVD. The picture is blur in the style of impressionists to imply the rapidity of change, the unreality of the present. It is a great picture as you could hardly get a scene more loaded with hidden/hazy meaning (even if some of it was probably unintentional!)