A while ago I wrote about how Henry Raeburn (1756-1823), one of my favorite portrait artists, tended to emphasize his subjects' crisp, white collars while usually leaving faces (normally the focus area) somewhat blurred.

And it's true that men's dress shirt collars of the early nineteenth century were white and very crisp, creating a sharp line at their edges that was sharper than adjoining facial features. Coat and jacket collars also yielded sharp edges. So Raeburn had some reason for his practice. Yet I think he often took the facial blurring a bit far from reality. No doubt he was striving for an effect that pleased him -- and perhaps his sitters, who often were older gentlemen with the usual wrinkles and complexion defects that age brings on.

A fairly extreme example of this is his portrait of James Watt from 1815. I included it in the post linked above. No long ago I revisited the Huntington Library in Marina, California (near Pasadena and the Caltech campus) and took more photos of the painting that I present below to further illustrate my point regarding Raeburn. 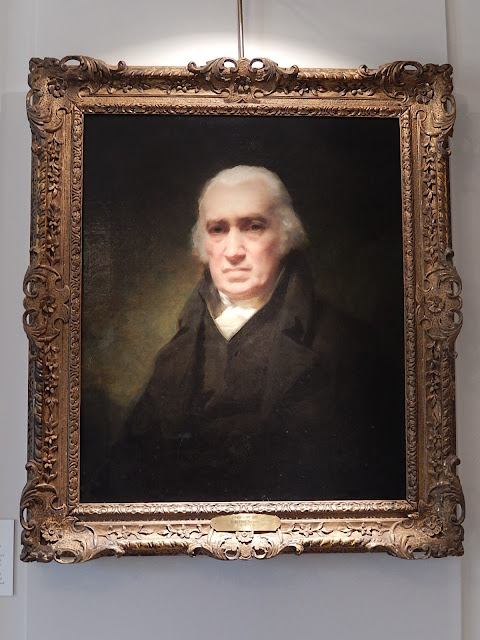 Here is a general view of the painting as it appeared when I visited the Huntington in November. The crisp collar area and contrasting facial details are obvious. 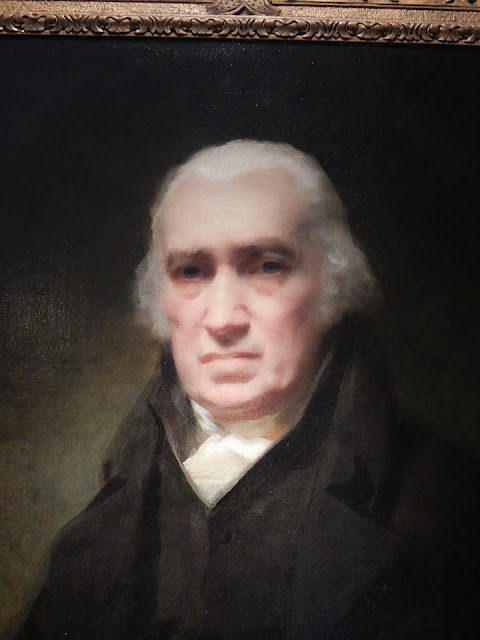 This is a close-up of the face. I included a bit of the frame when I snapped it to ensure that the camera's automatic focus would not get confused by the lack of sharp details on Watt's face. Note that Raeburn did include some sharp detailing for the eyes, leaving the rest of the face blurred.  So while he blurred the face, he did take care have the center of interest in sharp focus.
Posted by Donald Pittenger at 1:00 AM

I once saw a Raeburn self-portrait at the NPG and thought it riveting. Did he blur his own face? Dunno: I hadn't had a Pittinger education at the time. :)

dearieme -- A Raeburn self-portrait at the NPG? Drat!! Somehow I missed it the times I visited.

Maybe it was back there in the galleries with all those grey & brown portraits of politicians and Royal Academy types and I lost it in the clutter.

It was in the same room as a Reynolds' selfie. They stood out as by miles the best things in the room.

Ah.... Used to be an engineer in the aerospace world, with a reasonable interest in history, so James Watt is a name to conjure with. And I look at that Raeburn portrait, and I ask myself, "Is this the picture of James Watt -- barring film stock -- that ought to represent him down through millenia to come? The master engineer as he shold be seen by generations to come?"

And I have to say, this works really well. Raeburn's left us an image of a man worth viewing.